Panasonic has been around for 101 years, having started as Matsushita Electric Industrial Co., Ltd. in Japan. They know how to make great products. The Panasonic DP-UB9000 UHD (4K) Player continues that history. 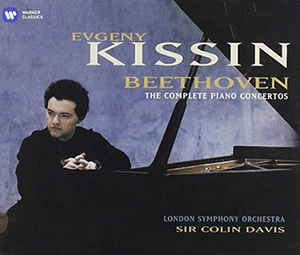 My favorite is Piano Concerto No. 5 – Emperor. The first movement lulls, while the second thunders. The UB9000 is a worthy vehicle for the tracks on this excellent CD. 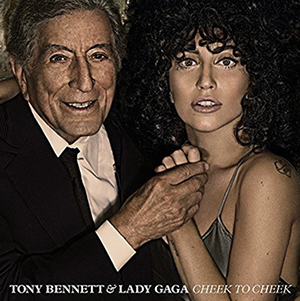 Tony Bennett and Lada Gaga “Cheek to Cheek”
Although I am a huge fan of Tony Bennett and not so much a fan of Lada Gaga, I have to admit that Bennett’s and Gaga’s CD, Cheek to Cheek (Steamline Records – ASIN: B00PO5EQYC) is pretty good. Perhaps it is just because Bennett is terrific enough that it overrides any reservation I have about Gaga.

Anyway, if you like ancient pop music (Anything Goes, If It Ain’t Got That Swing, etc.), this disc should be considered. The sound from the DP-UB9000 was smooth and silky, just the way I like it. The DP-UB9000 is definitely a high performance audio source. 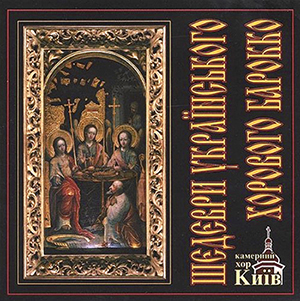 Chamber Choir Kiev “The Masterpieces of Ukranian Choral Baroque”
The Masterpieces of Ukranian Choral Baroque (CD Baby, ASIN: B000CA2QKU, 2002) is a recent CD purchase. I discovered it by accident and was very glad I did. This album is gorgeous! The album cover and backside with the track labels are in Russian, so I assume it was recorded and published in either the Ukraine or Russia.

I had not heard choral music from this part of the world before, and this album will be on my favorites shelf.

The DP-UB9000 is turning out to be a star performer, as I have never heard a player deliver more clarity and detail than this one.

This CD ranks # 9 in Baroque Dance Suite albums on Amazon. Number 9 out of thousands of discs. Wow! And, # 118 in Sacred & Religious Music albums.

If you are into this category of music, this particular album is a no-brainer.

I have always been a huge fan of classic jazz (when I was a teenager, jazz wasn’t classic; it was current).

Perhaps the most common solo instruments are the tenor and alto sax. 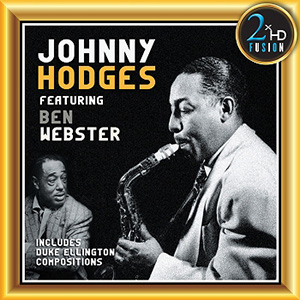 Hodges was an alto sax player of great renown. This album has been remastered from the original analog tapes into several formats, including 11.2 MHz DSD (DSD256 – quad-rate DSD), which is four times the bitrate of the original SACD format, so it is considered to be very high resolution. It was the DSD256 version that I purchased for download.

Those were the days when you could sit in a small club and listen, rather than having to buy a ticket to sit in a huge auditorium or a stadium. I remember in 1968, my fiancée and I sat 8 feet from Buddy Rich (jazz drummer) and his orchestra in a bar in Seattle. What an experience!

Anyway, about Hodge: the album is recorded beautifully. I downloaded it and placed it on a USB thumb drive. I really don’t have an opinion about what is the best-sounding audio format. I am more concerned with the music itself. However, I do not listen to MP3s because they are so lossy compressed. At 320 kbps for MP3s (compared to 1,411.2 kbps for conventional 16/44.1 CDs and 2,800 kbps for DSD64 (single-rate DSD), there is just too much sound that is thrown out. This DSD256 album has a bitrate of 11,200 kbps, so, compared to MP3s at 320 kbps . . . well, you get the picture.

There are some marvelous tracks here, from Bouncing with Ben which stomps, to Jeep’s Blues, which swoons. Clarity and detail are words that easily come to mind when listening. Of course, having such a high-resolution music album would not make any difference if the player did not have an excellent DAC. Well, the Panasonic DP-UB9000 has an excellent DAC. 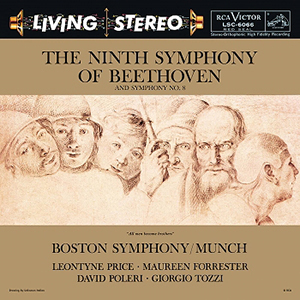 I don’t know how many different recordings of Beethoven’s Symphony No. 9 that are out there. I have several, including this 24/192 FLAC recording with Charles Munch and the Boston Symphony Orchestra (RCA LSC-6066 – Sony Classical) originally recorded on analog tape many decades ago.

My favorite movement has always been the fourth. It blows out the windows (figuratively). Perhaps that is the default composition for any symphony, and certainly for Beethoven.

The DAC in the Panasonic DP-UB9000 is definitely of very high quality, and the sound is clear evidence of that. I don’t think dynamics are audibly improved much by going to 24 bits per sample, but the clarity certainly is by going to 192 kHz. This is a result of having so many more samples which provides a higher content density.

Here is a photo of the rear panel. You can see the USB jack in the bottom center. Since you would likely play high-resolution audio files at some point, use the USB 3.0 jack in the rear, as it will deliver high-speed bit rates. But, this assumes you have your music on a USB 3.0 drive.

Once you have connected the USB drive, go to the DP-UB9000 control screen on your TV and select Music. 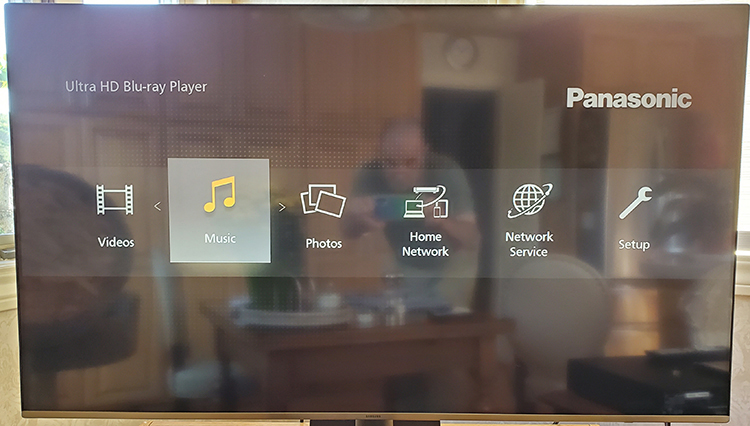 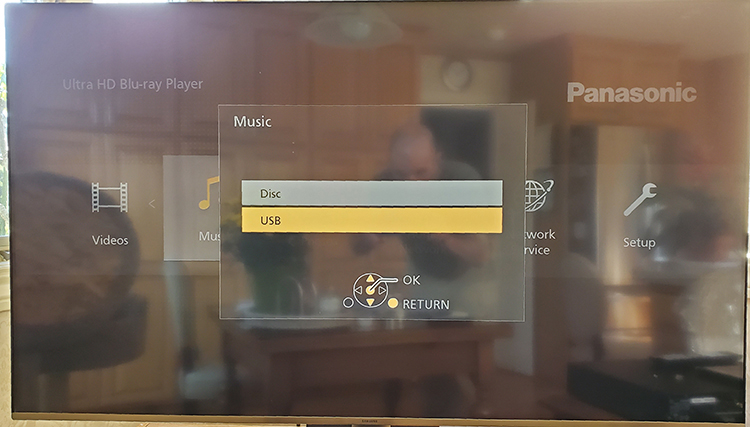 That will bring up the directory tree of your music stored on the USB drive. Select the folder where you have a specific category of music, in this case, Classical Baroque. 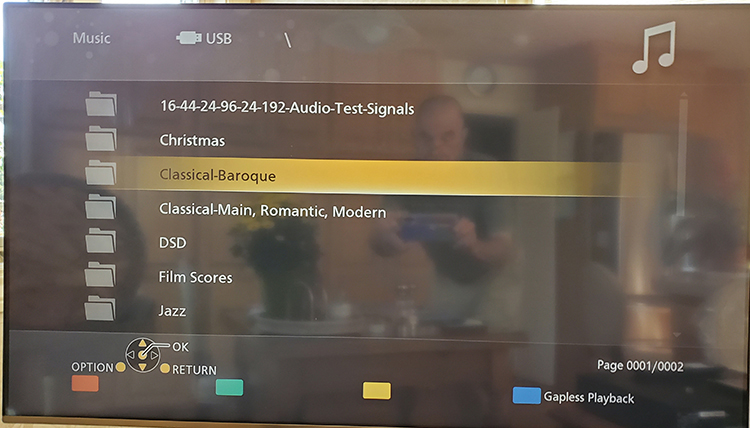 Now select the composer, in this case, Bach. 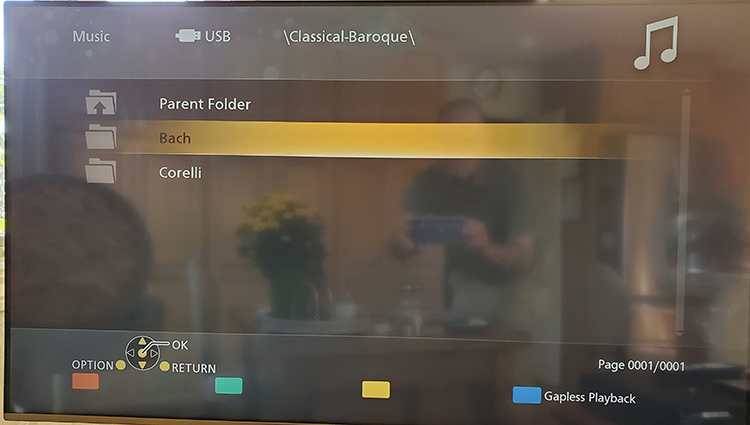 The category of his/her music. Here, it is Bach Keyboard Sonatas. 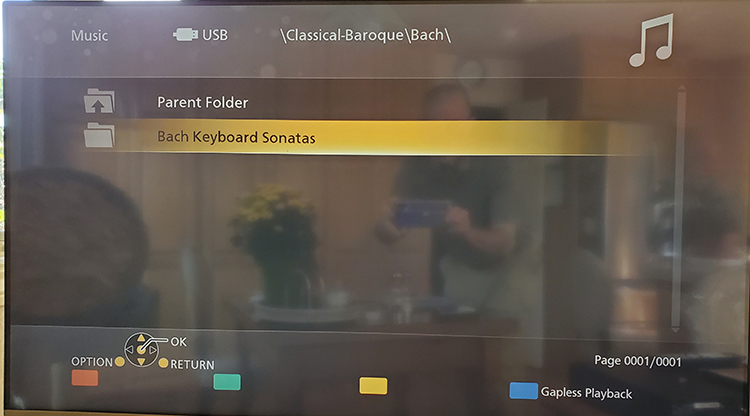 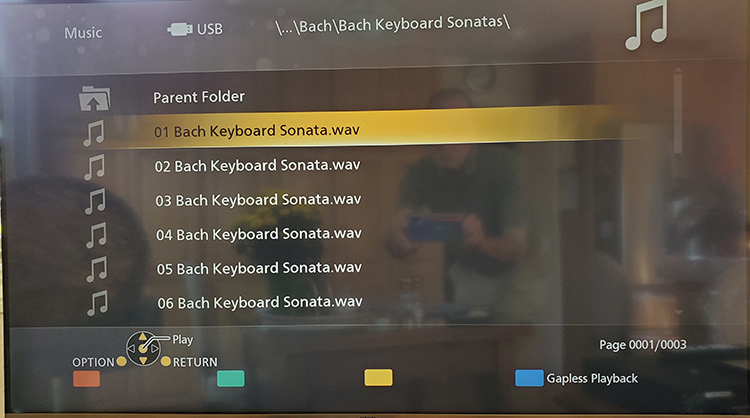 There are several audio filters available, including some that mimic the sound of tubes. You can just switch them in while playing music and determine if you like them. Frankly, I prefer to stick with a flat response and no digital audio processing.

I tested the DP-UB9000 using 16/44.1 signals from a CD. I used the analog stereo balanced XLR outputs on the DP-UB9000 connected to an Audio Precision spectrum analyzer.

No other A/V magazine has published bench tests on the DP-UB9000, so these results are exclusive to Secrets of Home Theater and High Fidelity. 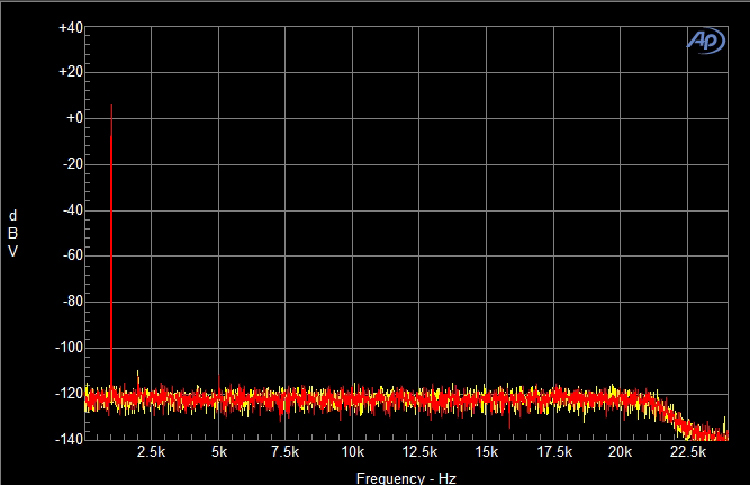 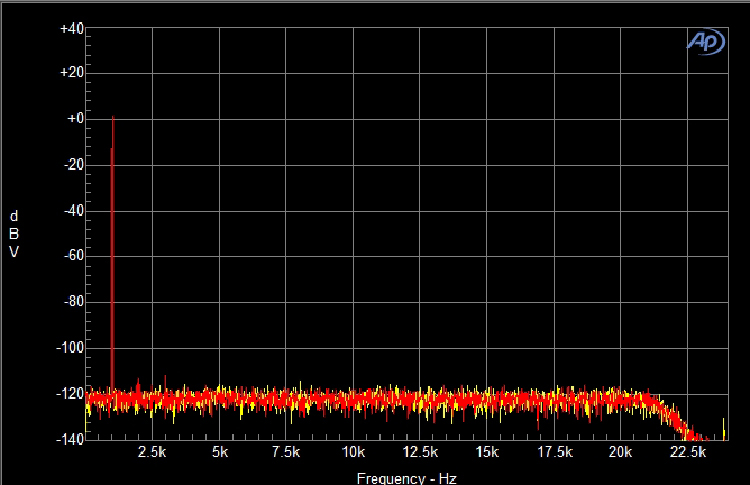 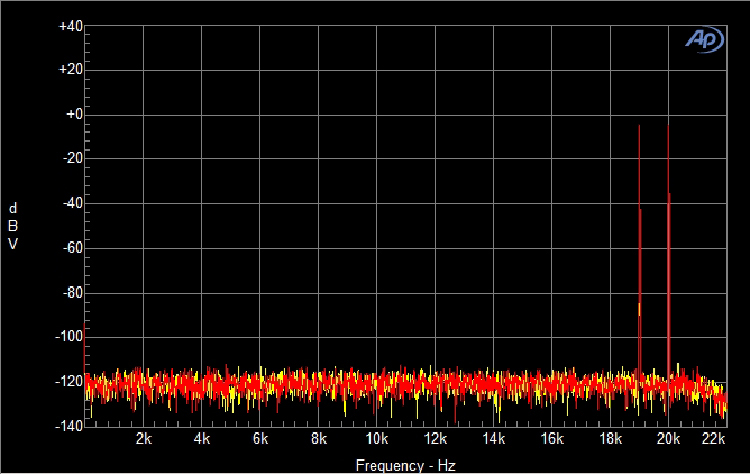 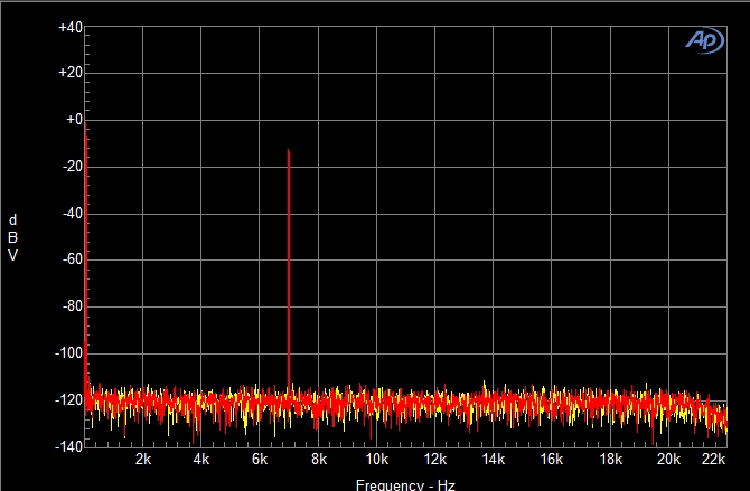 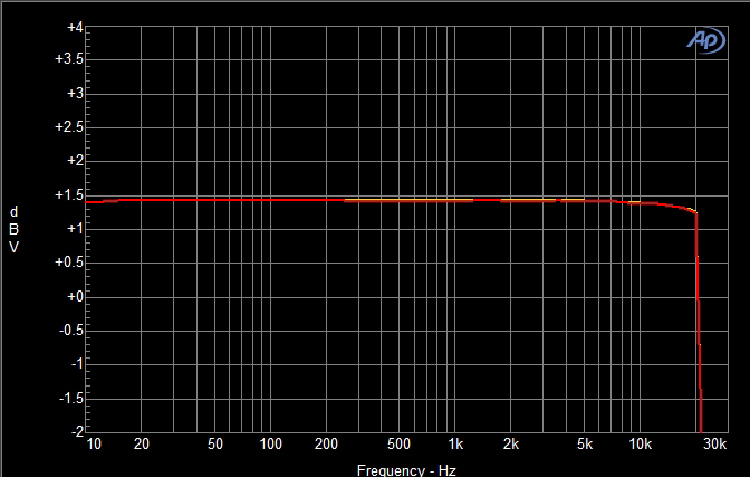 This is very good audio performance. Truly, there is almost no distortion. The Panasonic DP-UB9000 will play most types of music files, one exception being 24/96 and 24/192 *.wav, but that is not really what is currently popular with today’s consumers who are streaming and downloading. Most of it is either MP3 or FLAC, both of which the DP-UB9000 plays. As to DSD, the DP-UB9000 will play DSD files (up to DSD256 – Quad-rate DSD) on USB drives plugged into the USB ports on the DP-UB9000, but not SACD discs in the disc tray. To me, this is not an issue since I have moved towards having all my music stored on 2 terabyte USB hard drives. My OPPO players (BDP-105, UDP-205) won’t play all audio formats either, and that is why I am converting everything (except downloaded DSD music) to FLAC, which all players seem to support. I use JRiver software for ripping CDs and converting audio files to FLAC. You can convert 24/96 and 24/192 *.wav files to FLAC, which will play on the DP-UB9000.

I also watched some 4K movies, such as Anna, which is a new movie, and Alien, which is an old one. I used a Samsung 51″ 4K Ultra-HD TV for this. The DP-UB9000 delivers the best video quality I have ever seen in a player. It is compatible with the latest HDR codecs, such as HDR10+ which has a maximum brightness of 4,000 nits and 10 bits of color depth.

I tried some 4K videos that I recorded on my cell phone (Samsung Galaxy Note 10+), and they played perfectly from a USB thumb drive plugged into the DP-UB9000. So, with a UHD player like the DP-UB9000, you can use your phone’s 4K video capability on your vacations.

Be sure to check out Chris Eberle’s video performance review of this player.

All in all, the Panasonic DP-UB9000 is an excellent player for video and audio. It won’t play every audio format, but it does play nearly all. That is pretty much the case for all players (they won’t play every format).

We had several review units for this review. If you would like to have the one that I bench tested, along with prints of the distortion spectra and a certificate of testing, you can purchase it from Value Electronics. The unit is fully warranted and only used for about 15 hours. I would have purchased this review unit myself, but I already have six Blu-ray players.