I’ve reviewed a lot of Blu-ray players now and don’t often get surprised. So when I took the Toshiba BDX6400 out of its shipping box I was a bit taken aback. I knew it was coming, but I expected a standard size black box. Instead I found a tiny little player that’s even smaller than a Nintendo Wii. The tiny size made me instantly attracted to the BDX6400.

Blu-ray players can only output HD content over HDMI now, so there really is no reason every player is a large box. A smaller unit like the Toshiba BDX6400 still has every connection you likely need, but is easier to store away. So just how much does this little player manage to pack inside?

The Design and Setup of the Toshiba BDX6400 Blu-ray Player

With its small size the BDX6400 forsakes almost all external controls. A green LED surrounds a power button on top. On the front panel are Eject and Play/Pause buttons that are touch sensitive. I didn’t even realize these are there until I noticed them in the photo on the box. The rear offers up the required HDMI port as well as USB, Coaxial and Ethernet connections. The power supply is an external power brick in order to enable this small form factor. There is built-in Wi-Fi as well.

As the top model in the Toshiba Blu-ray lineup, 4K scaling is part of the BDX6400 feature set. This is the first model on the market to feature a Technicolor certified scaling solution from Marseille Networks. It also includes a selection of online content including Netflix, YouTube, Hulu Plus, and Pandora but no Amazon On Demand.

The remote for the BDX6400 falls short of what you expect in a $300 player. The buttons are all the same size, no matter if they are a commonly used button or a rarely accessed one. There is plenty of room on the remote to available to correct this. It offers no touch indicators to easily get your finger back to play, and it isn’t backlit at all.

The Toshiba BDX6400 Blu-ray Player In Use

Blu-ray performance today is more about the user interface and experience than about the image that is output. With everything using HDMI and outputting the native 1080p24 signal, the chance for a picture to look different is greatly reduced. Watching a selection of Blu-ray films, from Finding Nemo to The Hunger Games and many more didn’t expose any artifacts at all. The picture and sound from the Toshiba BDX6400 are exact and accurate with Blu-ray film content as you expect.

Getting to the film takes a bit longer on the BDX6400 than more other players recently reviewed. Load times and menu responsiveness on the BDX6400 is slower than most, and occasionally I’d have a film that just didn’t load until I power-cycled the player. This bit of menu sluggishness isn’t limited to the just Blu-ray films either.

The main menu system on the Toshiba BDX6400 is fairly slow to navigate around. Toshiba has kept the wheel-style layout from their prior players, and it is a bit faster than before. It still lags compared to other players from major vendors. The largest culprit is the apps menu system.

Loading the main apps menu takes a few seconds, during which you watch a loading screen. Elements of this screen are still unfinished as well. Selecting the weather or location buttons at the bottom result in a message saying that this isn’t implemented yet. I wish they had excluded the buttons altogether than provide me with ones that don’t work and provide an error message.

From here you can launch into Netflix, Hulu Plus, Vudu, or a Disc. You can also stream content over the network that works well for me in my testing. MOV, AVI and MKV test files that I keep on hand to test all play back fine though the buffering of some of them takes a while over Wi-Fi. Netflix and Hulu Plus work as advertised. Watching some episodes of Breaking Bad or Thomas and Friends is straightforward and easy, and the SuperHD support is present. The interface just feels unrefined and slow to respond to inputs from the remote.

The scaling of DVDs looks quite good on the Toshiba overall. Watching The Incredibles from a few feet away I can tell that it isn’t the Blu-ray, but it certainly looks better than you remember DVD content looking. 4K scaling doesn’t fare quite as well with jaggies becoming more apparent in the scaling. Watching the Ship scene from Spears & Munsil you can clearly make out jagged ropes and other items. There is also a good bit of ringing that is introduced into the image in high contrast areas.

One flaw that the Toshiba BDX6400 has, and many other Blu-ray players have been having recently, is having poor initial settings. Out of the box the settings that Toshiba uses for the BDX6400 cause excessive ringing around objects and artifacting of fine details. One needs to go into an on-screen menu during playback to disable this. Of course most people will never realize this and will have a worse image because of it. Other vendors have been doing this as well, so it isn’t limited to Toshiba, but it’s an issue that is growing.

Once the Toshiba is playing back content, and you’ve set the controls correctly, it looks fine. Getting to that point is what holds the Toshiba back, as it takes too long to do so. As much as I like the small package I’d prefer that a faster processor be inside.

The Toshiba BDX6400 Blu-ray Player On The Bench

For the Toshiba BDX6400 bench tests, and for future players, I’m going to use the default settings to establish the baseline score. As most users will never adjust these, scoring them based on the optimal settings of the controls seems unfair. If a player has a guided setup when you first turn it on to set them correctly, that will be used. Just no extra steps will be taken to adjust it beyond what is presented to the user. 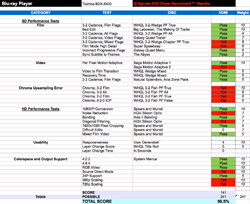 Using this method the Toshiba score fairly poorly overall. It has trouble maintaining locks on clips where the flags aren’t perfect and there is no noise reduction to speak of. On the Ships scene from Spears & Munsil, the default settings cause excessive ringing and artifacts of the ships cables. Many of them virtually vanish due to excessive edge enhancement. The zone multiburst and plate patterns show issues that I had never seen before and are certainly a cause for concern. Had these large errors not presented themselves I might have never discovered the hidden picture settings that ship enabled on the BDX6400.

The CUE tests all show excessive pixilation on the edges of the fish, showing incorrect CUE processing on DVD content.

Disabling these enabled features causes the Diagonal Filtering test to pass, and the scaling tests to be better but not wonderful. However the cadence lock issues remain so the score does not improve by that much. As I said in the review you will not see these things with common 1080p24 Blu-ray content, but they’ll appear on concert and documentary Blu-ray discs, as well as DVD content. Oh, and the test disc even managed to crash the BDX6400, making it the first player to ever do so.

The load time tests for the Toshiba BDX6400 put it behind almost every player tested this year. In early 2012 these load times would have been equal to mainstream players, but today they are lagging behind the competition. 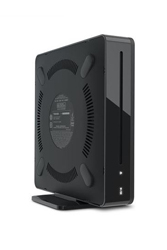 Toshiba does a good job by surprising me with the exterior design of the BDX6400 Blu-ray player, but fell short when it came to the internals. The video processing capability of the player lags behind its rivals, falling short on the Blu-ray benchmark by a significant degree.

The larger problems to me are the occasional lock-ups, the unfinished UI, and the overall slow user experience. Even with the small size of the BDX6400 it needs a faster processor to provide a better experience. It also needs at least another firmware revision to take care of these lock-ups and pauses, as well as the unfinished onscreen interface.

What the Toshiba BDX6400 is offering is a compact player with 4K scaling but not one that is really price competitive today. Since most people with a 4K set are not space limited for their Blu-ray player, alternatives like the Sony BDP-S790 or the Oppo BDP-103 make more sense. I wish the BDX6400 performed better as I am happy to see someone producing something different, but it doesn’t perform well enough to justify the price.