Up NextSetting Up a Bryston BDA-3.14 Streaming DAC and Qobuz Streaming Service – A How-to Series, Part 2 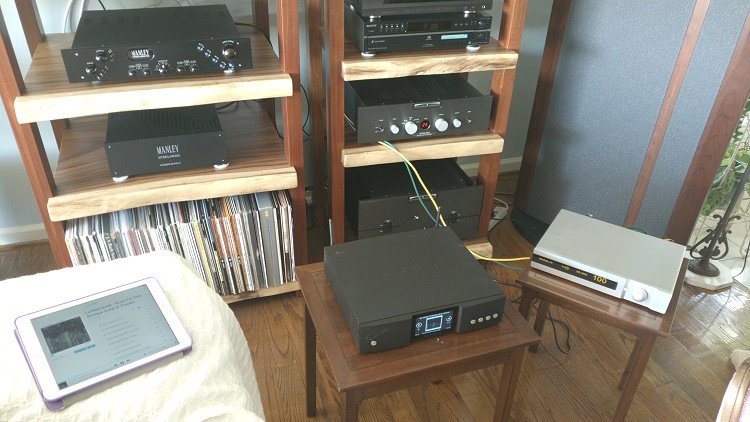 Music and movie streaming is becoming increasingly popular at an astonishing rate. Streamers and streaming services have been here for a while but are really now taking hold of the music and movie delivery to consumers at home and anywhere they are located using their phones or tablets.

I have put off setting up streaming because (1) I have all my music on hard drives connected to OPPO BDP-105 and UDP-205 players, using a phone and tablet app that shows me a directory of the music which I can play by simply tapping on an album or track; and (2) I am not very proficient with manipulating my wireless network.

However, I have finally decided to “bite the bullet” and try this whole streaming thing out.

This article represents my first try at setting up a high quality and reliable music streaming pipeline. For the streamer, I obtained an AURALiC ARIES G1 reviewed in November 2018 by Yongki Go. For the streaming service, I chose Qobuz because they offer the ability to stream high-resolution audio, up to 24/192, in lossless FLAC.

The AURALiC ARIES G1 does not include a DAC. For this, I used an AURALiC VEGA which we reviewed in 2014.

Three photos of the AURALiC ARIES G1 are shown below 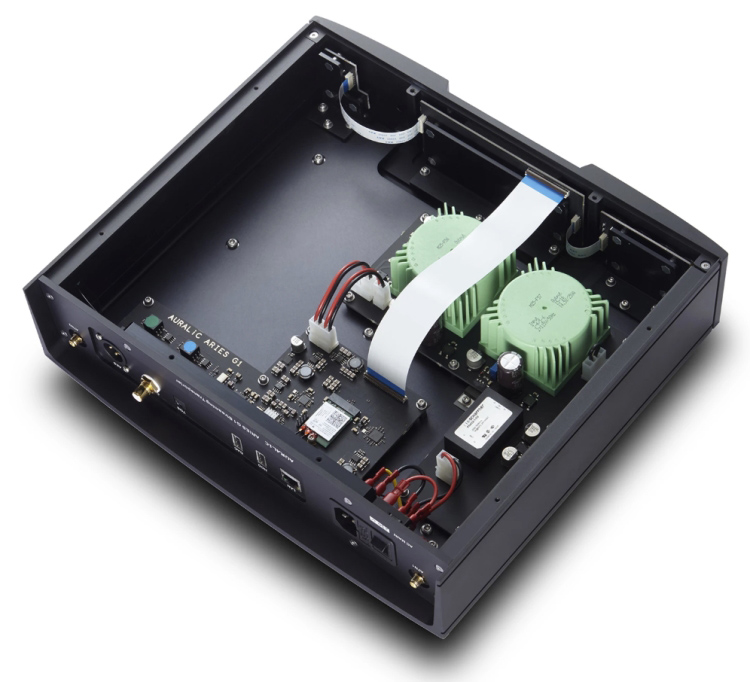 And here is the AURALiC VEGA DAC.

To set up the streamer and Qobuz streaming service, I first downloaded the AURALiC Lightning DS app to an iPad. Then, I powered on the ARIES G1 and the VEGA DAC, and I launched the DS Lightning app on the iPad.

Then, I selected Qobuz as the streaming service for the ARIES through the iPad. This involved connecting to the Qobuz website and typing in my license number. Once that was done, I could see the Qobuz desktop on the app, and I could select albums to stream (see photo below). For security reasons, I have changed the serial number of the ARIES to 00000000. In the case of this screen, jazz albums were displayed. 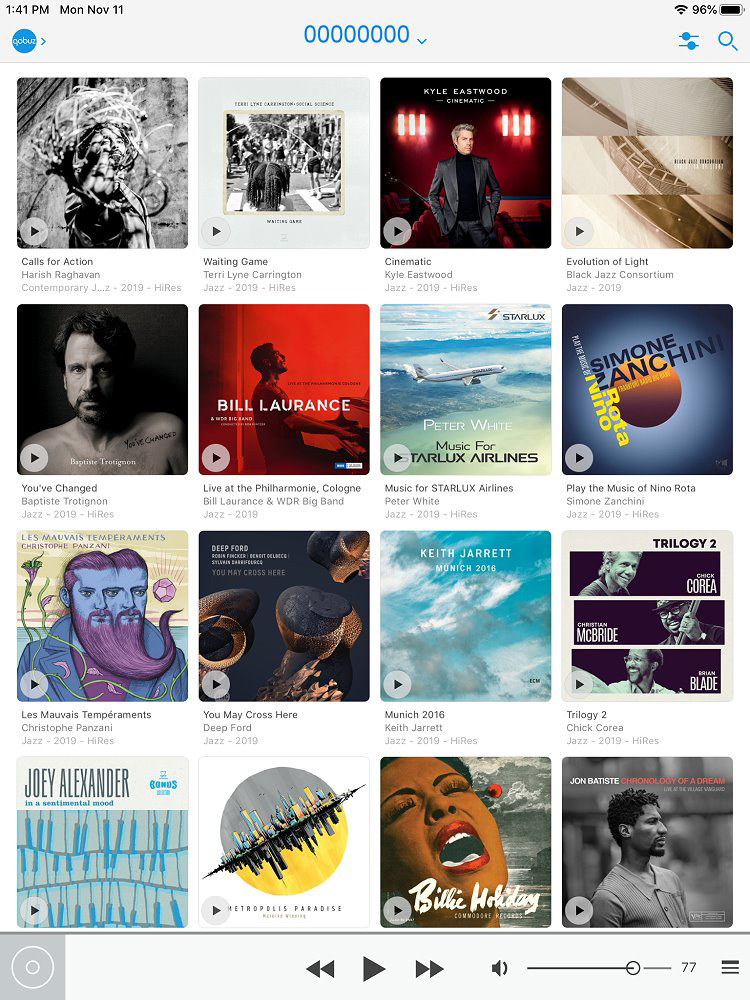 At the top left is a small round blue button labeled Qobuz. Clicking on that shows some options as to what types of albums to display. I chose “New Releases”. 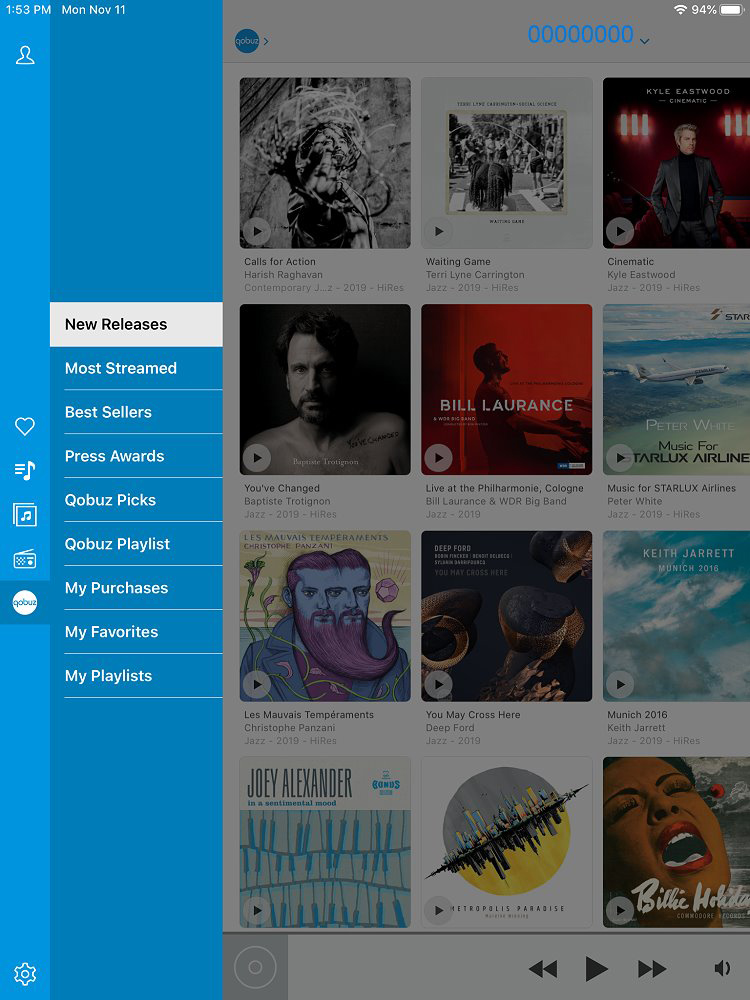 Then, on the top right is a button with two dots and two horizontal lines. Clicking that button shows the categories of music. I selected “Classical” from the list as shown below. 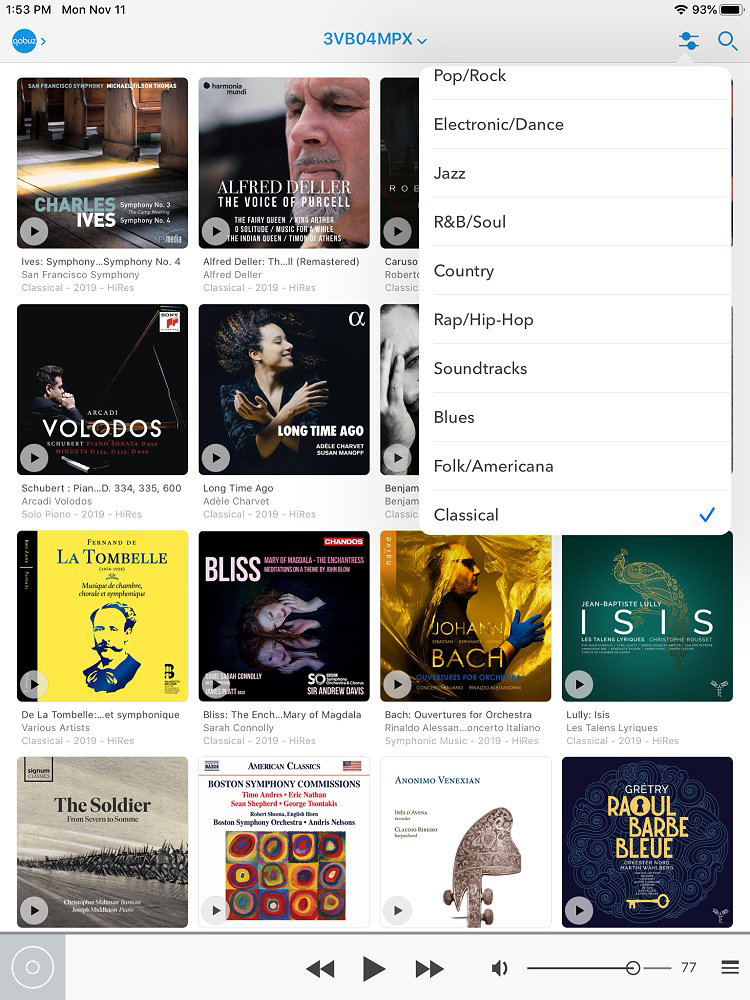 Then I scrolled down to the Mozart album shown on the top row, third from the left. 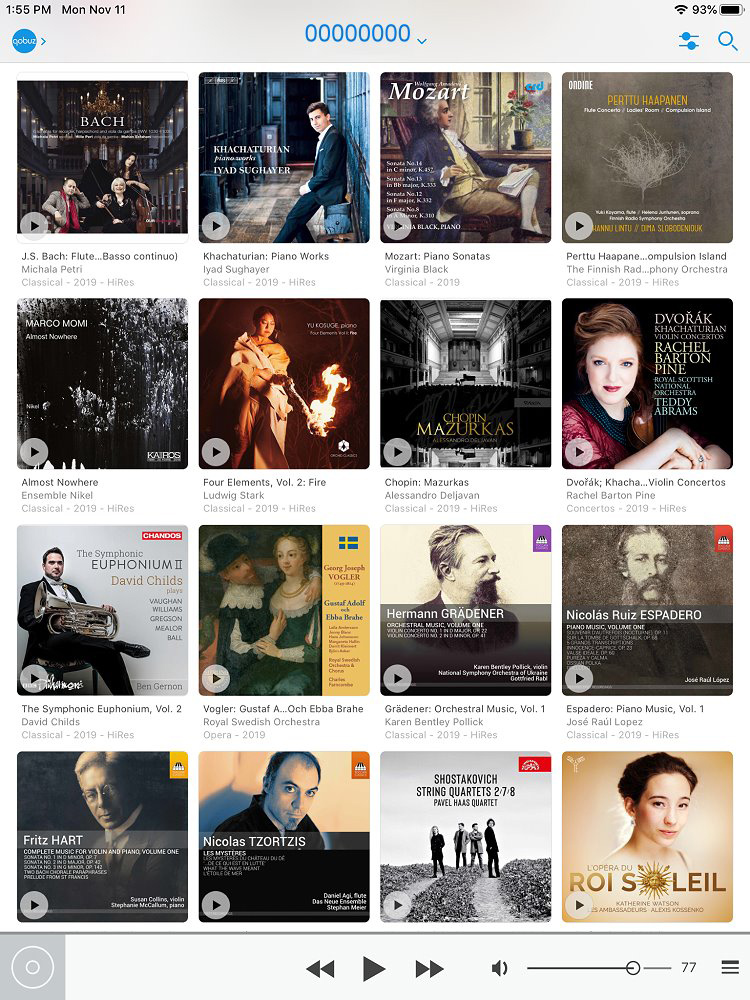 I selected it, and the screen shown below appeared. I clicked track 1, and it started to play, indicated by the track being highlighted in blue. I could put it into pause if I wished by clicking on the pause button at the bottom. 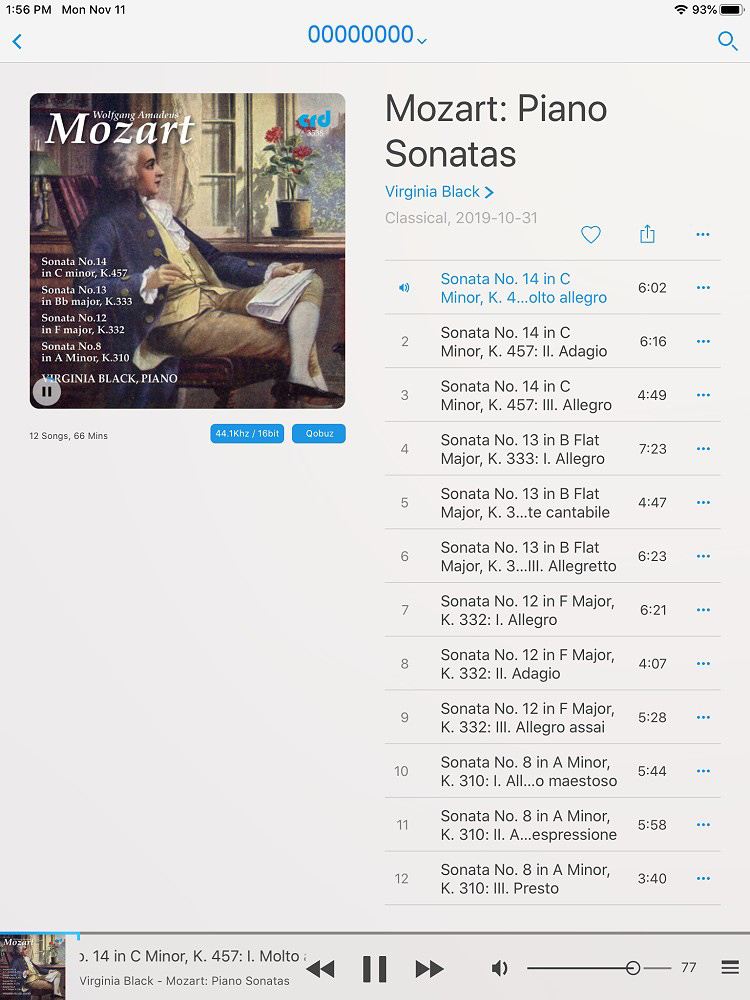 I decided that I wanted to have this album in my Favorites folder, so I clicked the heart icon that is just above the first track. A small pop-up came on the screen telling me the album was “Added” to my Favorites folder, The heart changed to blue, indicating that the album was saved to my Favorites folder. Notice that this album is 44.1 kHz/16 bit which is shown just below the album cover art. There is a slider at the bottom right that lets you increase or decrease the volume. I turned the volume up on the preamplifier so that I could set the average volume on the slider. Then, if an album was recorded at a low volume, I could slide it up on the iPad. Or if it was recorded too loud for the setting on the preamplifier. I could slide it down. 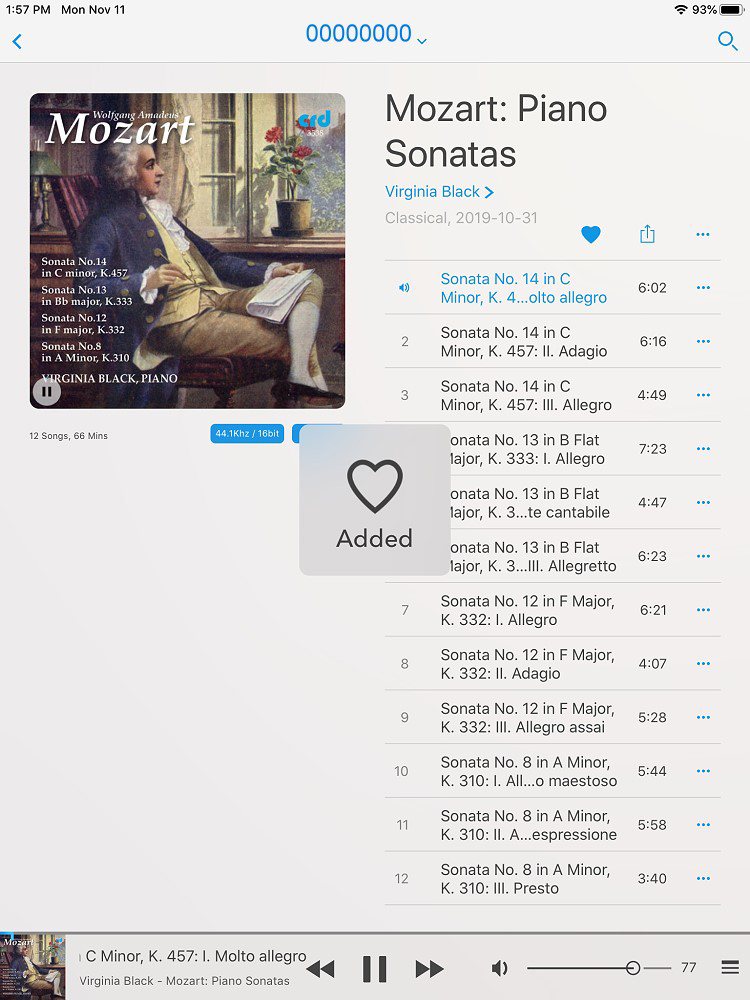 If you click on the small photo of the album in the bottom left corner, the following screen appears. It shows the bit rate, which in the case of this album, playing at this particular time in track 1, was 522 Kbps (Kilobits per second). 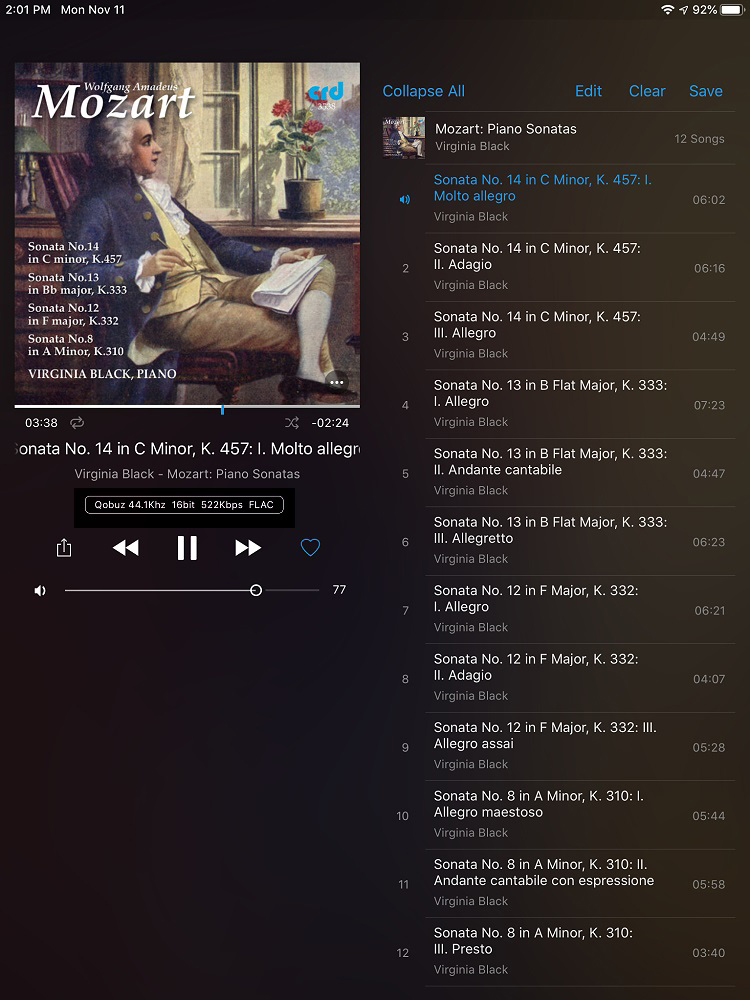 You go back to the previous screen by sliding the screen upward. Then I clicked on the arrow at the top left, taking me back to the screen that shows all of the albums (fourth screen above), and I selected the Bach album on the top row, left end. It took me to the Bach album screen. It is a 96/24 high res album. 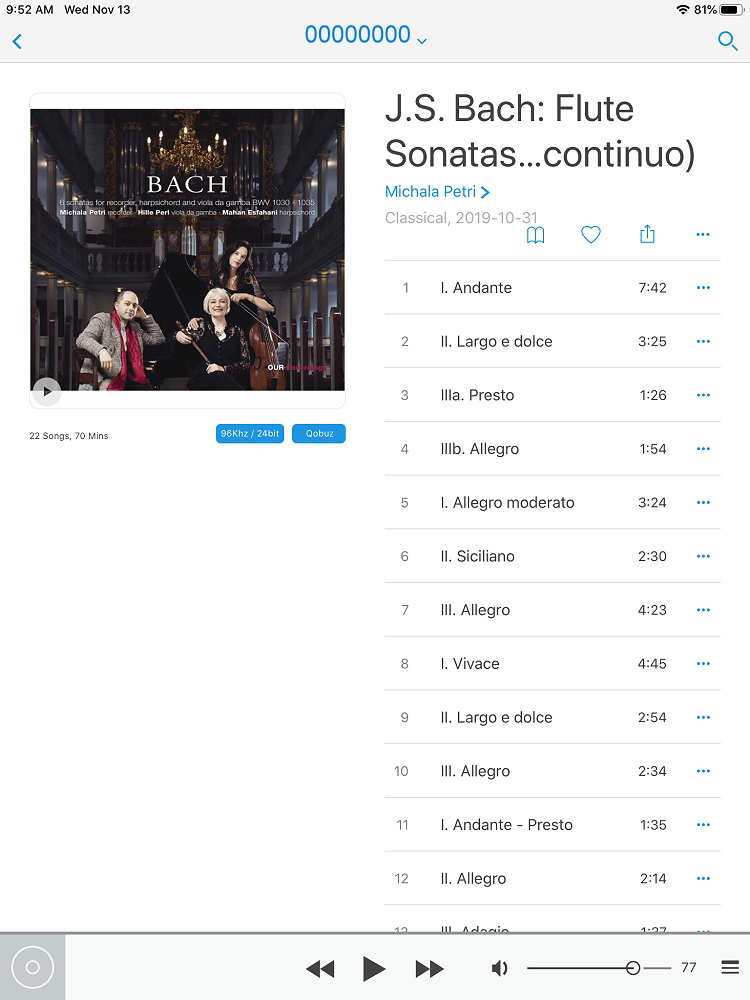 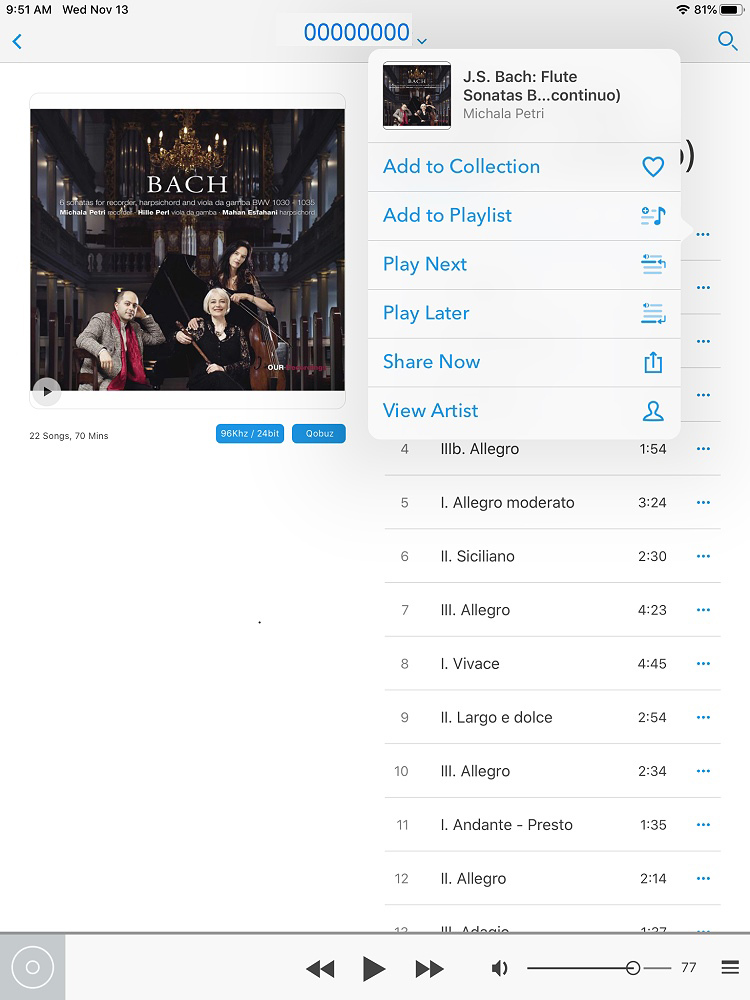 When the Bach album started to play (after the Mozart album finished) and then going to the next screen (clicking on the photo in the bottom left corner as done with the Mozart album), we see the bit rate, which is 2.809 Mbps (Megabits per second). This is much higher than for the Mozart album. 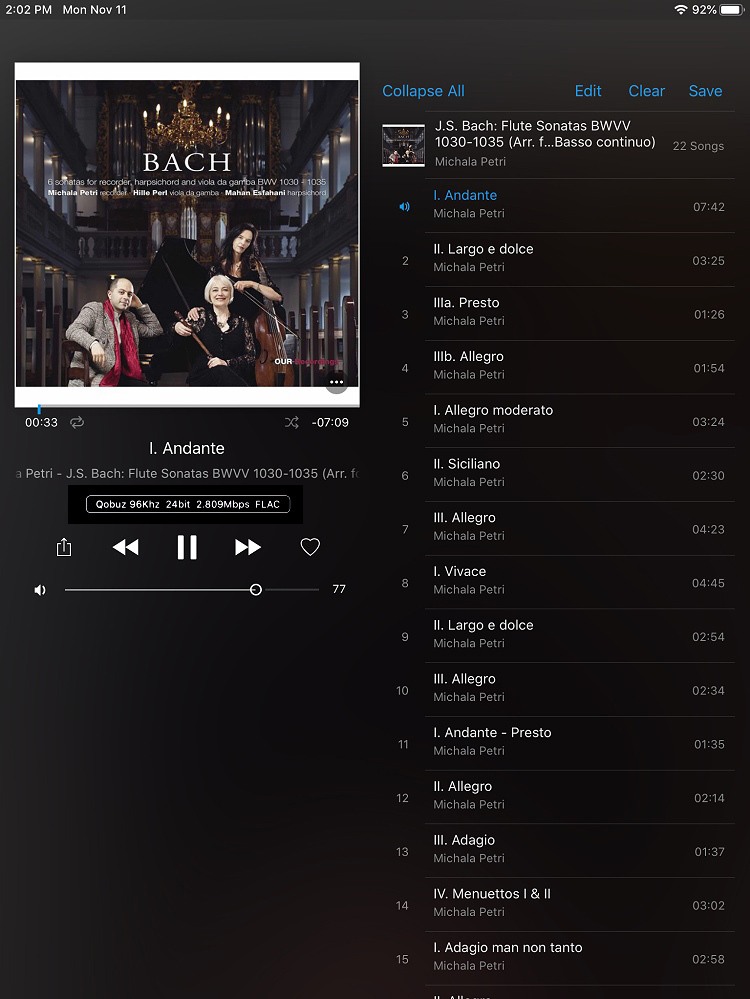 I went back to the albums page and selected a Beethoven album, shown below, second row, left end. I added it to the queue, and when it started playing, I went to the page that shows the bit rate (second screen below). 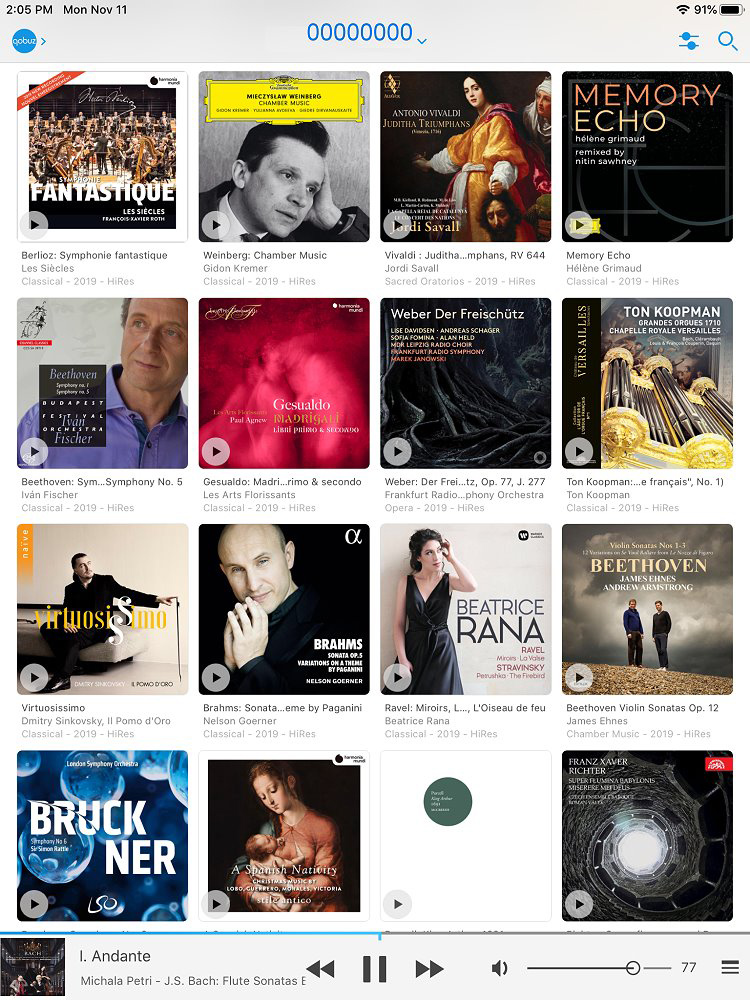 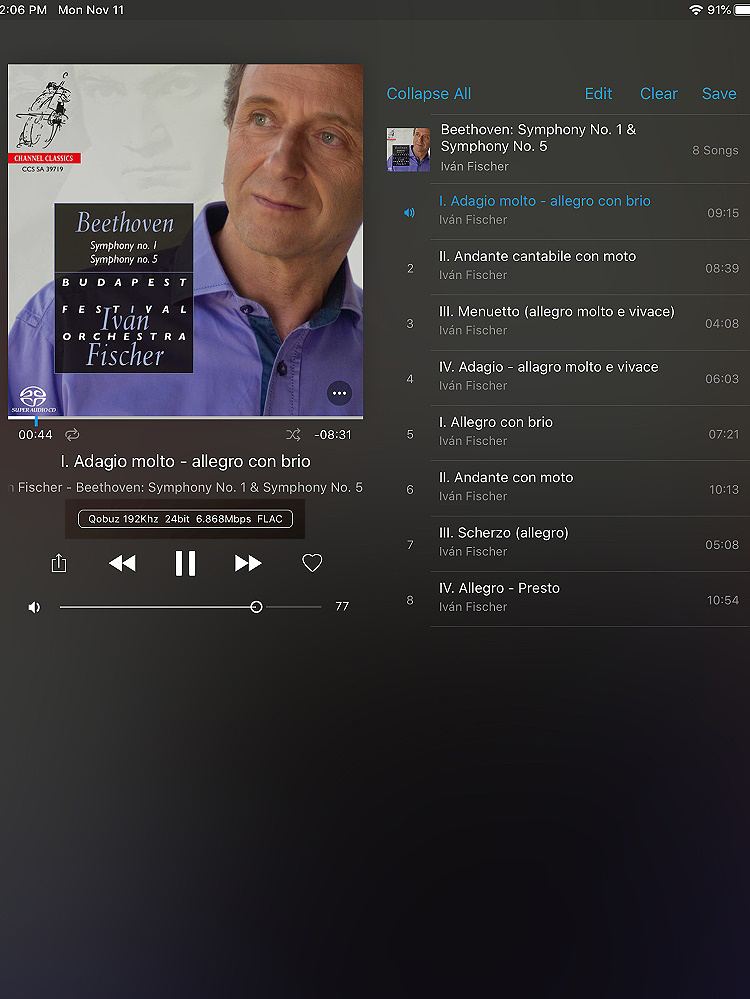 It is a high res (192/24) album, and the bit rate was 6.868 Mbps at the point I took the screenshot. That is higher than the 96/24 Bach album, and much, much higher than the bit rate for the 44.1/16 album. Standard CD-quality sounds terrific being streamed, but high res (96/24 and 192/24) does add an increased frequency response, although you would have to be rather young to hear that. Also, the reconstruction filter does not have to work as hard for the frequencies in the main audible band (20 Hz – 20 kHz).

For one test, I downloaded three albums to my computer from Qobuz, one in 44.1/16 and the other two in 96/24. In order to do this, it was necessary to install the Qobuz native app on my computer (this is not the Lightning DS app). I then played the albums from my computer hard drive and the same albums simultaneously being streamed from the Qobuz website to my computer and to an OPPO HA-1 pure Class A headphone amplifier and OPPO headphones. I switched back and forth from the hard drive versions and the streamed versions. The use of the HA-1 and headphones allowed me to hear all the fine details in the music.

They (the albums on my hard drive and the same albums being streamed from the Qobuz website) sounded exactly the same, confirming my assumption that the streamed music did not lose anything in the streaming process.

As far as streaming various bit rates, I feel that CD-quality is the minimum for an audiophile system. I compared lossy MP3 to lossless FLAC of the same music album, and I heard a distinct difference. MP3 sounded as if the midrange had been stripped out. This would be OK if a user just has a basic, inexpensive audio setup, but for audiophiles, I recommend going with a streaming service that has, at a minimum, CD-quality FLAC.

After this amazing experience, I think that music streaming is the way to go for your next audio project. It gives you access to thousands of albums, and with the use of excellent equipment and a quality streaming service as I’ve shown in this article, you will have audiophile-quality sound. It is also extremely convenient because you can sit anywhere in your listening room and use the iPad/iPhone app to access all of your music, controlling the volume as well, and not have to get up from your seat to change discs in the player tray. If you use an iPhone and/or iPad, you are all set. Otherwise, an investment in an inexpensive iPad will be necessary.

Albums in your collection of discs and those that you have ripped to your hard drive are almost certainly available from the streaming service’s library of albums. So, all you have to do is search for the albums that you already have in disc form and on a hard drive and add them to your Favorites folder in Qobuz. Any of your albums that are not in the streaming service library can be accessed from your hard drive, plugged into the USB port on the streamer. In the case of the AURALiC ARIES G1, the music files can be up to 384/32 PCM and up to DSD512.