Up NextDCI-P3 Color – What It Means in Today’s Ultra HD World
Good News! Marantz Says No More AVR LSIs for You!

You might recall my article on Audio Video Receiver Build Quality announcing the downgrade of the analog section of almost every AVR and Pre Pro coming from the major Far Eastern manufacturers. The article discussed how multi-channel audio equipment was being degraded. Instead of many small ICs, with state-of-the-art performance, the entire analog section was moved to one large chip which I called the AVR LSI (Large Scale Integrated Circuit). The article cited the Marantz AV8801, which used a pair of Renesas LSI chips (R2A15220FP). Renesas was one of three sources for the AVR LSI chips. A couple of years ago Renesas discontinued the part. It was selling like hotcakes, but it is likely Renesas closed the special fabrication facility which produced the chip among 100 others which may not have been selling as well.

Only two sources of AVR LSIs were left: Rohm and New Japan Radio. Rohm did a quick upgrade to their chip which found its way into most of the Renesas sockets. The New Japan Radio AVR LSIs did not have the performance or flexibility of the Rohm. Instead of trying to rush out a Renesas equivalent, New Japan Radio declared war on the AVR LSI and introduced a set of three New JRC chips which are modern equivalents to chips used before the AVR LSI appeared.

Two chips are just passive audio switches. No op amps are inside these switches at all. The larger NJU72750 has 48 switches. This is good enough for switching 7 analog inputs to 3 output buses. Those outputs would typically be the main channel, room 2 and room 3. In an AVR LSI, these MOSFET switches are small in size. Size is inverse to on-resistance. (A semiconductor can be used as a switch. The on-resistance, as the name implies, is the resistance of the semiconductor, when the transistor is based in the on state.) Wimpy switches need an op amp buffer which, in an AVR LSI, is nothing to write home about. The NJU72750 switches are made much larger, with a worst-case on-resistance of 40 ohms. That is low enough to go direct to a digitally controlled volume chip without any electronics. New Japan Radio is able to sell this chip in 2019 because it is a fresh design using new process technology.

Before the AVR LSI, digital volume controls were sourced by Toshiba, which long ago exited the business. The best of the Toshiba’s is still available with different pin-out from Muses (72320), a division of New Japan Radio. The Muses part has found its way into many high-end two-channel products.

The 8-channel Cirrus CS3318 digital volume control became popular when the Toshiba products disappeared. It offered 8 channels on one chip and took the op amps inside as well. It did not perform quite as well as the Toshiba two-channel volume chips with external op amps, but it took up less board space and cost less. Once the AVR LSIs arrived, the Cirrus was looking very expensive and soon became extinct in Far Eastern multi-channel products.

New Japan Radio has solved the price issue offering a part equivalent to the Cirrus, with slightly reduced performance at a quarter of the price (estimate based on small scale pricing of 2000 parts from the same distributor). The new part is called the NJU72343. The NJU72343 is a tiny bit different than the Cirrus with a pair of stereo switches up front to do the stereo analog direct / DAC switch function (multi-channel direct is long gone so just two switches are needed). The NJU72343 uses a new process technology and a clean sheet design. (A clean-sheet design allows the designers to start from scratch when improving a product they already sell. New technologies and processes help the designers achieve the goal of meeting challenging new specification requirements while at the same time meeting cost reduction targets.)

The NJU72343 is manufactured in a less expensive CMOS process technology. Eight channels, on one chip, now cost less than what New Japan Radio used to sell for four channels in a more expensive BiCMOS process (NJW1195A).

One op amp per channel is inside the NJU72343 exactly like the Cirrus. There are eight of them in total. Compare that to the Rohm BD34705KS2 AVR LSI with 24 op amps. With 24 of those op amps packed into one die along with over 80 switches, the size of each op amp has to be smaller. Smaller size translates to more noise and distortion. This is discussed in detail in my article cited above.

Worst case specs show the New Japan Radio volume chip cuts distortion which is reduced by 50% at 1 kHz compared to the best Rohm. Rohm does not supply a 10 kHz THD specification as New Japan Radio does. Worst-case noise is down by 40% between the Rohm BD34705KS2 and the NJU72343. 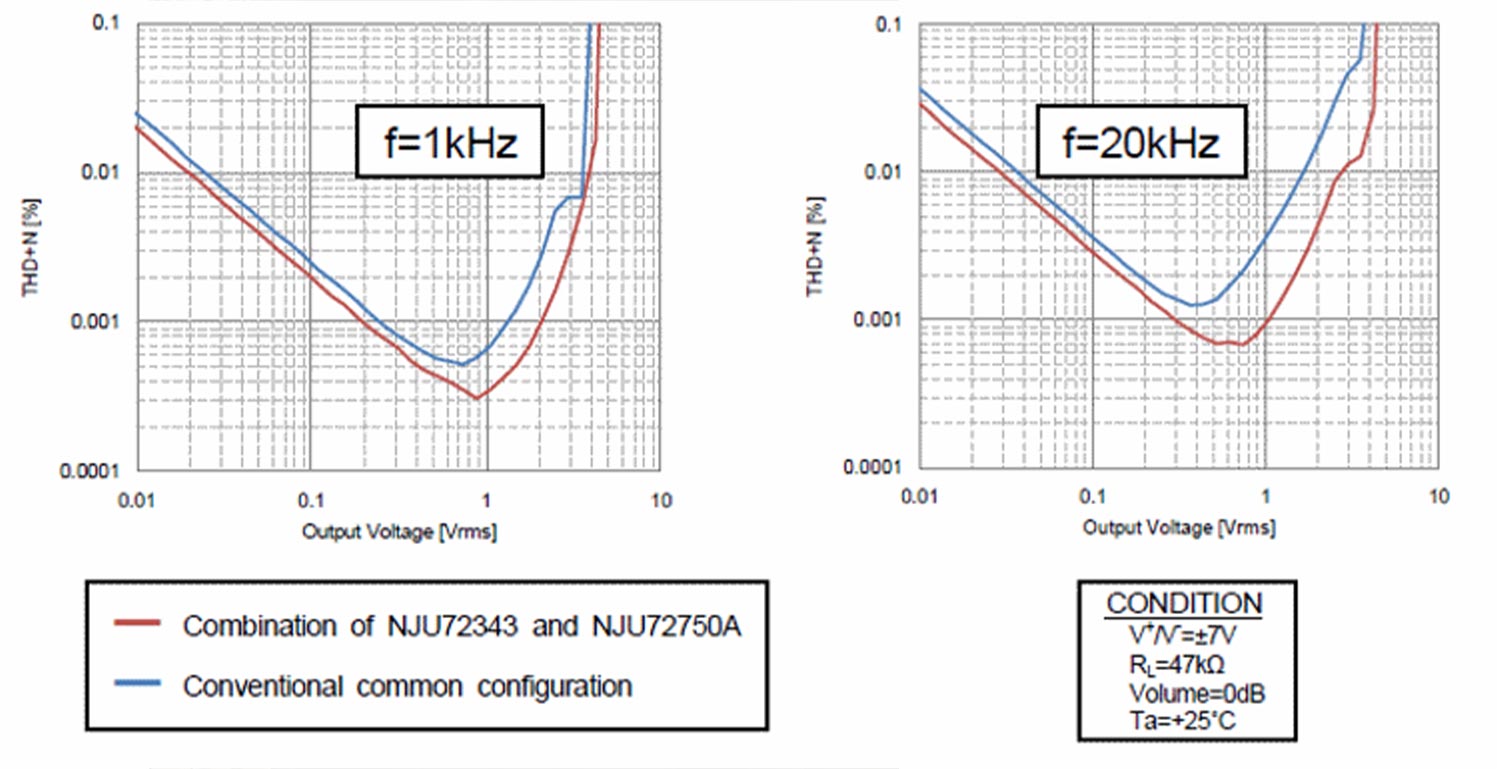 To the left of the Y axis minima, in the graphs, noise dominates distortion. The lower the noise, the lower the curve. This curve shows the noise is improved by about 2.5 dB. Above the minima, the distortion dominates. This part of the curve needs no elaboration.

The Medium Scale Integrated Circuit is Your New Friend

If you want to build a 7.1 AVR you need just two of the New Japan Radio chips. It is medium-scale integration (MSI) that makes this possible. Just as the name sounds, an MSI chip has more transistors than an SSI chip but a lot less than an LSI chip which in turn has a tiny amount of transistors compared to today’s VLSI (Very Large Scale Integrated circuit) chips.

In the MMI switching chip, 48, large, low impedance switches can drive the volume control chip direct with no buffer op amps in one chip. The only op amp in the signal path that remains is in the MMI volume control chip. Two chips on the board instead of one bring significant performance changes. For the audiophile it is easy to understand – just one op amp in the analog preamp signal path!

As can be see from the above figure, the switch in the volume chip (NJU72343) brings the DAC in direct.

The level adjust for the ADC, available in the AVR LSI, is missing in this implementation. That would require a two-channel volume chip, and I did not see one in the schematics of Marantz and Denon AVRs I examined, which use this new chip set.

I also did not see anything in the GUI for the new Marantz and Denon products that allows for ADC gain adjustment.

The ADC clipping level becomes a fixed value without the volume control up front. The ADC function is much less important now with most equipment having HDMI or SPDIF outputs.

The bottom-line is that the New Japan Radio two-chip solution offers significant performance improvement over the AVR LSI chips, but it does not get us all the way to what can be achieved with a modern SSI solution using the latest op amps and the Muses volume chip.

Marantz and Denon are the First Adopters

Every Marantz multi-channel product from the NR1609 up to the AV8805 is using the New Japan Radio multi-chip solution. They can also be found on Denon products, but I do not know how far into the product line they go. Marantz 7.1 products get a little fancier than the reference designs from New Japan Radio and use two switching chips. That these chips are in the NR1609 indicates New Japan Radio has significantly increased performance over a Rohm AVR LSI, but the price increase is not large.

Turning our attention to the $4,490 Marantz AV8805, a comparison of the AV8805’s analog board to the AV8802, which used the Renesas AVR LSI (R2A15220FP), is breathtaking. Where just two chips were previously used, now nine of the New Japan Radio chips are found. I wish I could reproduce the schematics from both units here to facilitate a back to back comparison, but the copyright of the service manuals prevents me from doing this.

Our first measured performance of these new chips is on our upcoming review of the Marantz AV8805. In that product we saw the improved noise performance but not the distortion. Marantz follows the New Japan Radio chips with additional electronics which may be the source of the distortion.

We look forward to testing more products that are freed of the AVR LSI.

The New Japan Radio reference design requires four switching chips and two volume chips compared to AVR LSIs to create an 11.1 AVR with room 2 and room 3 support. Marantz likes a little more functionality on room 2 and 3 which adds in more chips which will be explained below.

In the 1970’s Marantz decided to create the ultimate quadraphonic receiver. They put in everything including the kitchen sink, which would be an oscilloscope, to display the 4 channels. Every one of its 9 knobs and countless switches are passing two or four-channels of analog. No op amps are in this thing outside a couple in the tuner and quad decoders. A working sample is yours on eBay for $3,000. Nothing like it would be attempted again, but when you compare the number of channels running in the AV8805, the 4400 is a tiny toy. Open the two and the differences are dramatic with the 4400 being a rat’s nest of wires running between the front, small boards containing the discrete transistors, and the rear panel. The AV8805 is stacks of large boards, stuffed with ICs and not one analog signal running to the front panel save the headphone. 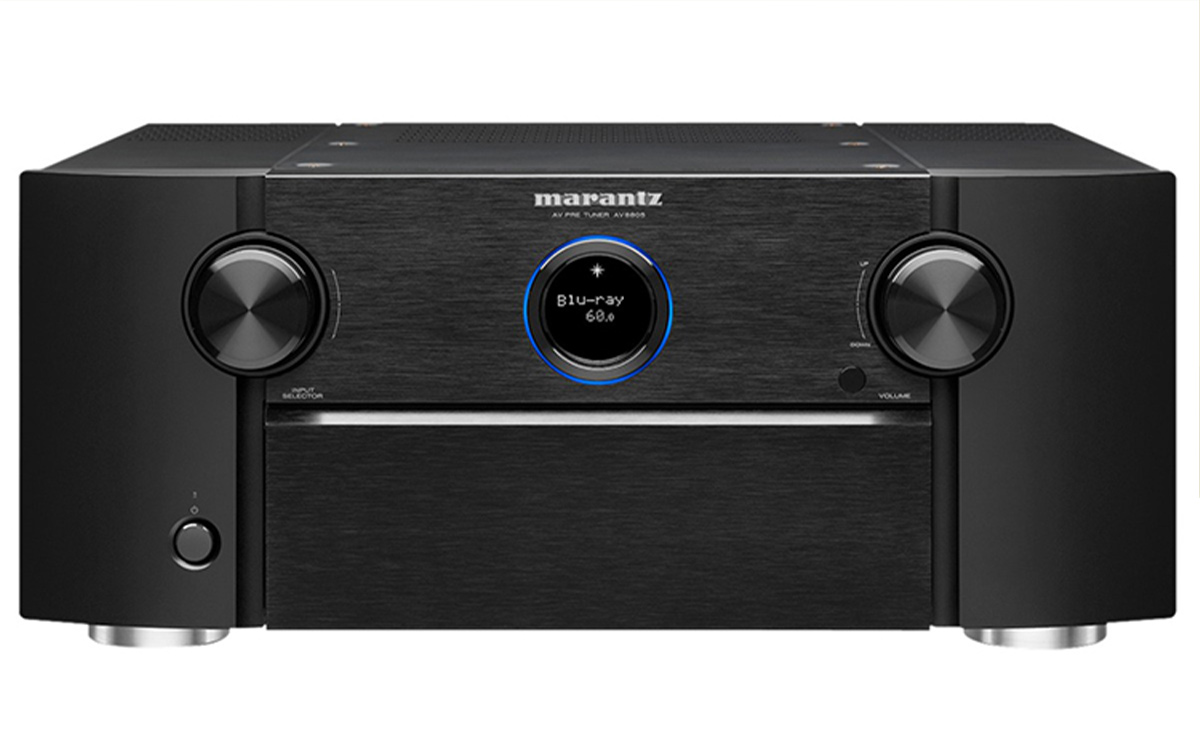 The Marantz AV8805 is more complex than the Marantz Atmos AVRs and clocks in with seven New Japan Radio switching chips (300 discrete switches) and two 8-channel volume chips. But wait, there is more! Room 2 and Room 3 each get a stereo all-in-one LSI chip from New Japan Radio (NJW1194). That is another set of four volume controls. Twenty volume controls in total. As a bonus, Marantz uses the tone control functions (add in four more potentiometers) built into the NJW1194 which requires external passive components. A few external op amps are hanging around those Room 2 and 3 functions, providing mono-operation and a high-pass filter to prevent blowing out tiny speakers I guess. The SR6012 gets the same deluxe treatment on room 2, and the SR7012 gets it on room 3 as well. 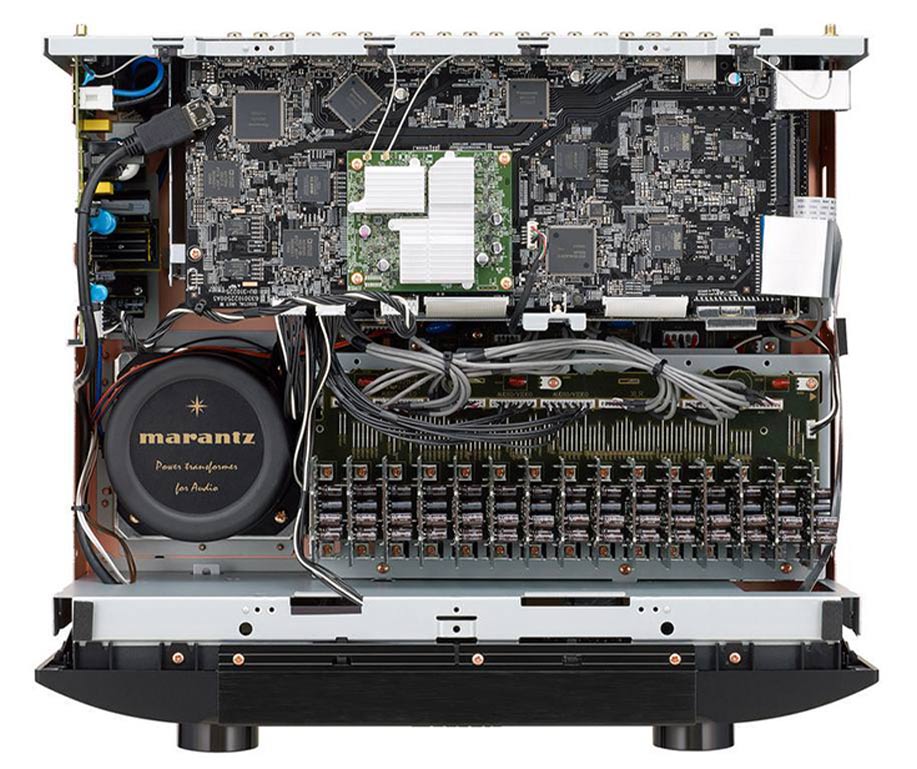 Room 2 and 3 also get a stereo DAC of their own. That is in addition to the 8 AKM AK4490 chips providing 16 – count them – 16 channels out! Another DAC is hanging around for the networked Wi-FI outputs which bring the total count to 22 channels!!! The Marantz SR6012 and SR7012 drop back to octal AKM AK4458 DACs which results in significant performance degradation, but they still have a total of 20 DAC channels moving from 13.2 to 11.2 main channels. The quad Analog Devices DSPs are unchanged on the SR6012 and SR7012.

Add in those 4 DSP chips from Analog Devices, along with all the memory and glue chips around them to support them, and you have something unthinkable in the 1970’s. HDMI, Ethernet, and wireless support were not even in the engineer’s dreams. I have no idea what an AV8805 will be selling for on eBay in 50 years, but if I were collecting I would bet on the all-analog Marantz 4400 which may be into five figures. While digital standards may be obsolete in less than 10 years, analog audio is approaching the century mark.

The author wishes to thank Robert Kozel and Carlo Lo Raso for their assistance with this article.