Last time I looked at a Blu-ray player from Panasonic it was their DMP-BDT210 model. It had almost everything I wanted in a Blu-ray player: perfect image performance, fast loading times, and a good deal of streaming content. I liked it enough that I bought one for the bedroom, where it was used happily until it was gifted to the in-laws, and allows them to watch movies and streaming content in their motorhome. It also got our award for Best Blu-ray Value Player that year, which it richly deserved.

Because of the success of that model, I looked forward to seeing if the DMP-BDT230 maintained that excellence, and simply added a few tweaks to the formula as more streaming content became available. The only way to know was to put it through its paces.

Design and Setup of the Panasonic DMP-BDT230 Blu-ray Player

Thank you, Panasonic, for having a nice, fairly regular design this year. The DMP-BDT230 case is flat on top, and has regular, tactile buttons and not touch sensitive ones. It isn’t as pretty as some other designs, but it is totally functional, which is more important to me. The included remote is nice and compact, though lacks the backlighting that I would like to see. The design of the player itself is pretty basic, as most Blu-ray players are today. The rear offers only Ethernet, HDMI and Optical connectors. The power cable is detachable, so it is easy to replace with a different size and is uncommon at this price point.

The front has the inputs hidden away behind a drop-down panel, but includes USB and SD Card slots. Unfortunately the SD slot is only for playing back music or pictures on the Panasonic, and isn’t used for BD-Live. If you want BD-Live content, you’ll need to leave this panel open and have a USB drive attached at all times. I really wish vendors included the memory for BD-Live or at least had a rear USB port, so you didn’t need a USB drive sticking off the front at all times.

One feature missing in the setup of the player this year is the Enhanced Chroma option that Panasonic had previously. In the past, this would fix CUE (Chroma Upsampling Error) problems, but introduce incorrect color decoding into the HDMI bitstream. Panasonic is using a new decoding chipset so this feature is gone, but a new bug is present. The colorspace selection lets you choose YCbCr 4:2:2, 4:4:4, RGB Standard, or RGB Enhanced. No matter what you pick, the player only outputs YCbCr 4:4:4, so that selection is totally broken right now.

The video setup is very straight-forward because of this, as the only selection you can really make is resolution. There are some picture modes available, but since the default mode is ideal, just use that. You can tweak the image in your display and get better performance that way as well. Now connected, did the Panasonic perform better in use than it did during setup?

The Panasonic DMP-BDT230 Blu-ray Player In Use

Starting with some Blu-ray content, the Panasonic player was very good in use. The image looked great, and titles were pretty quick to load. One issue I found is that the Menu button didn’t work a lot of the time, and I had to bring up the Options and then select Menu from there on Blu-ray titles. That is annoying and another issue that I hope they can fix with firmware, though it doesn’t impact the image. Everything on screen looked and sounded great, and I didn’t see any evidence of issues with the player messing up the content. For regular Blu-ray playback, the Panasonic was basically perfect, this is what I expect.

Watching DVDs was also very good on the Panasonic. My usual choice of Cars 2 looked just fine; free of any obvious stuttering or motion issues, and the responsiveness of it was very quick. TV Shows also played back just fine, and so did the documentaries I watched. For all of the disc media that I tested, I didn’t see a single hiccup or issue in my time with the DMP-BDT230.

As soon as I went to try streaming content, that is where some issues began to happen. You can add additional apps to the Viera Connect screen, and that is done through their custom app screen. When you go to do this, you are presented with advertisements that run in the corner, with video and audio. That is something I really don’t want to see on a product that I just paid for. Panasonic has had many of the same complaints with their TVs this year, but on those you can disable the ads. I found no way to turn these off in the menu system, and I worry this will grow to show more intrusive and larger ads going forward.

Once loaded, the apps reside in the Viera Connect section, with space for either apps on a page. I say only space for eight apps, and not just eight apps, as one of the spots here was taken up by an advertisement as well. It didn’t have video and audio, but it was still using up a space where I could put something useful. This Viera Connect screen also lags a good bit, and takes a while to move from one screen to another. I used to like this interface on the 210, but as Samsung has stepped up their game on the BD-F5900 and its SmartHub design, the Panasonic is less user friendly and slower.

Some of the Panasonic apps use the standard interfaces, like Vudu and Netflix, but Amazon Instant Video is wrapped up in a custom skin. There is also no support for the Amazon Cloud Player app or Spotify, which limits the music options here. Once installed, the Netflix app had much worse performance that I have seen recently. All players are tested in the same AV cabinet here, one floor above the wireless router (both 2.4 GHz and 5 GHz bands available) to try to keep results comparable. With the DMP-BTD230 I had more frequent rebuffering and failures to connect to the services than with other players.

Beyond Netflix, Amazon Instant Video would often report that a title wasn’t available, and Hulu had buffering issues. Surprisingly the HDX streams on Vudu played just fine, as those are usually the most demanding ones available. Even at different times of the day the issues remained, so it wasn’t due to too much network activity that streams were buffering. It seems that the DMP-BDT230 just has a Wi-Fi antenna design that might not be quite as good as other players out there, or has a smaller buffer for data than other players do. I’d really recommend using a hardwired connection with it, though that’s not a possibility for most people I know.

As a disc player, the Panasonic was good, but as a streaming player, I wasn’t impressed.

The Panasonic DMP-BDT230 Blu-ray Player On The Bench

Beyond the colorspace issue that I discussed earlier, there is another problem I found in the DMP-BDT230. It applies some extra sharpening to the color information that you can’t defeat, and has the potential to cause some moiré or other visual effects due to it. The Spears & Munsil chroma zone plates clearly demonstrate this issue. I’m not sure why Panasonic changed processing chips this year, but it seems to have some issues that weren’t present on the last model. 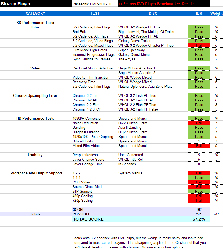 On the Benchmark tests, the Panasonic does great in the DVD section, with a single failure, and pretty good in the Blu-ray section. More and more players are failing the mixed film and video tests, with combing present in the text, for reasons I’m unsure of. The biggest section of issues arose from the lack of colorspace selection, and the player does poorly in responsiveness. The Viera Connect screens are particularly sluggish. Noise reduction failed as there is no option to engage it, and the DVD wedges look very rough in comparison to other players this year.

The Panasonic only supports one colorspace, but it does YCbCr 4:4:4 perfectly. Perhaps they will fix the sections later and the others will work as well, but I don’t know if it will or not.

On the loading tests, you see the Toy Story 3 one look really slow in comparison to recent players. That is because of the Menu key not working properly for it and having to bring up a pop-up menu to select Menu to get that to work. Since this took extra time to figure out when running the test, I left the extra time in there. I imagine it might take other users even longer, or they might not be able to find the option. Without that, the DMP-BDT230 is quick, but not the quickest, and takes a while to load a disc from power-off.

On the overall test set, the Panasonic DMP-BDT230 does very good with most disc content, and falls short in the settings and options available. Without multiple colorspaces to choose from, or noise reduction to enable, there are a lot of instant failures here, and the incorrectly working Menu key causes it to fall short on the speed tests.

I’m unfortunately very disappointed in the Panasonic DMP-BDT230. Even if it had perfect playback and incredible streaming content, I’d still be hard pressed to recommend it based on the innovation of advertising that they have built in. Other vendors that include advertising on their products, like the Amazon Kindle, let you buy one without advertising if you wish, and make you very aware you’re getting it with ads. Those also aren’t video ads with sound on a Kindle. Since other vendors make Blu-ray players that don’t include advertising this way, I’d say to get one of those.

The bugs that are present right now only help to reinforce this decision. The bug in the colorspace menu is a big one that shouldn’t have been missed, and the extra sharpening in the color data is another problem. The menu button bug adds to this, and the lack of noise reduction is something I haven’t seen in any other player that I can recall.

I really am unsure what happened here, as prior Panasonic players have been great, but this one just falls well short of what I expect. The Wi-Fi performance was also poor, with issues on streaming content and a streaming interface that was slow and laggy. Blu-ray discs might look fine when you play them back, but that is the bare minimum we expect from a player and almost all of them can do that just fine. Right now I would look at other players unless we hear that Panasonic has fixed all of the bugs with another firmware update, and removed the ads at the same time.