Up NextHIFIMAN R2R2000 HD Streaming Audio Device and DAC
The Wyred 4 Sound DAC-1v2 sports the highly-regarded ESS Sabre 9026PRO chip and it can handle PCM files up to 32 bit/384 kHz as well as DSD256 files via the USB input, which has galvanic isolation for reducing noise and interference to the signals.

Besides the USB input, the product also features two coaxial and two toslink inputs that can process up to 24 bit/192 kHz PCM signals. The DAC-1v2 is also equipped with balanced circuitry and proprietary discrete output stages. At $1299, the DAC-1v2 is intended to be the more economical option to the top-of-the-line DAC in the Wyred 4 Sound DAC lineup, the DAC-2v2. But intention aside, the resulting product is a solid performer, as the review below indicates. 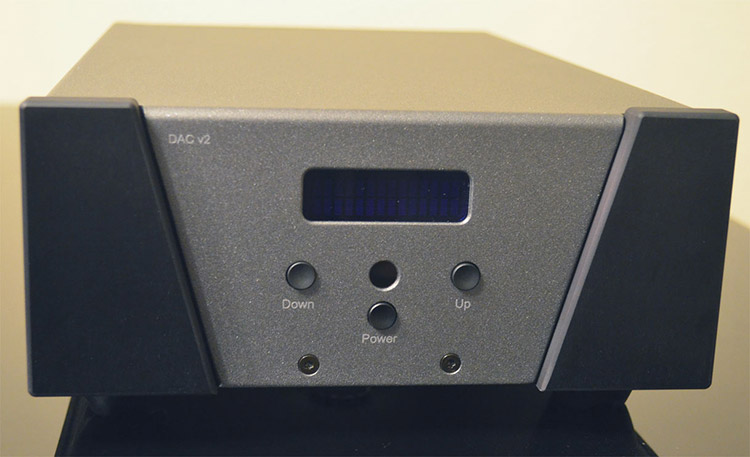 Founded in 2007, Wyred 4 Sound is an audio company focusing on the creation of high-fidelity audio electronics products. Although relatively young, the company has earned accolades from various trade publications and industry experts. The mission of Wyred 4 Sound is simple: to produce great products at affordable prices that provides years of pleasure to the fellow music lovers. Indeed, the company’s products seem to be created and manufactured out of passion for creating the highest quality products for the money. Therefore, it is not surprising that Wyred 4 Sound has garnered a strong reputation in the audio world.

There are currently two conventional DAC products in the Wyred 4 Sound lineup. The one reviewed here is the less expensive of the two, the DAC-1v2, which is priced at $1299. It is the updated version of the popular DAC-1, which includes upgrades such as new ESS SabrePRO chip, fully balanced circuitry, and even an updated casework. It’s specifications are impressive, but those of you who have been in this hobby for a while should know that they do not tell the whole story. What matters the most to the consumers is how it sounds and hence, I will try to capture that as well in this review.

The Wyred 4 Sound DAC-1v2 has a half-width form factor (8.5”) in a rather unassuming appearance. It’s two-tone gray and dark-gray color combination gives it a rugged look, which reminds me of an armored vehicle. The build quality is excellent. It’s front plate is relatively clean, populated only by three round press-buttons and a small LCD display. The middle button is for stand-by/off while the left and right ones serve as the down and up input selectors, respectively.

The rear panel of the DAC-1v2 sports the input and output connectors and it’s on-off switch. The DAC-1v2 possesses two coaxial, two optical, and one USB inputs. No AES/EBU input is provided. Inherent limitations for different input transmissions result in different processing rate capabilities. The coaxial and optical inputs can process signals up to 24 bit/192 kHz. The USB input is galvanically isolated and is capable of processing up to 32 bit/384 kHz PCM or DSD 256 signals. The outputs of the DAC-1v2 include a pair of balanced and a pair of single-ended connectors. 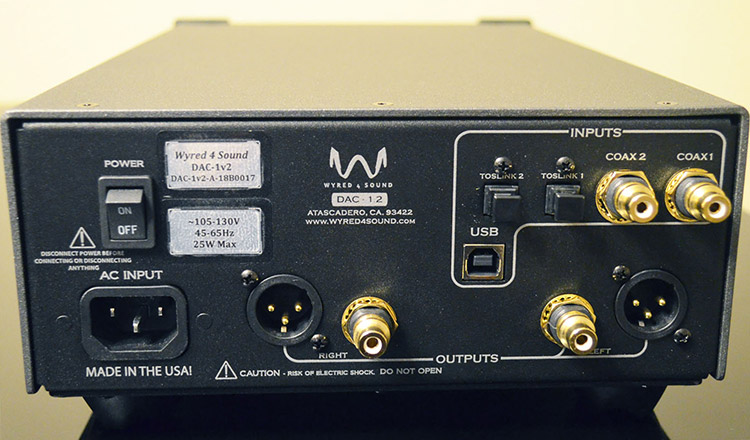 The main processing inside the DAC-1v2 is handled by the 8-channel ESS Sabre 9026PRO DAC chip in quad parallel configuration. Automatic signal upsampling is performed internally to reduce jitter and to keep the output filtering to a minimum. The power supply of the DAC-1v2 is designed to be robust with an oversized toroidal transformer, large capacitors, and three stages of filtering. The analog output stages are powered by a separate power-supply to ensure no interference from the digital front-end. The DAC-1v2 also utilizes proprietary discrete output stages to achieve the best sound quality. At it’s MSRP of $1299, the DAC-1v2 is not equipped with a Femto grade clock, but such an upgrade is available as an option for an additional $125.

It is clear from my description above that Wyred 4 Sound put all the necessary measures in the DAC-1v2 to achieve the best possible sonic outcome within it’s price point. Needless to say, that such manufacturer’s delicate design effort makes me appreciate the product even more.

Most of the time during the review, I simultaneously connected the digital outputs from several sources to the various inputs of the DAC-1v2. The DAC-1v2 is not equipped with a remote function so to switch to a different input, I had to get up from my seat, approach the unit, and select the input I wanted using the up and down selector buttons. Although I do not think this is a deal breaker, I do like the convenience of being able to control everything remotely from my seat. The DAC-1v2 does have the automatic input scrolling feature, but if you have a source that is always on, the feature will not work as intended, as the DAC will just lock in on this input source even when there is no music playing. Also the activation of the feature will put the DAC in always-on mode and will not go to the stand-by mode. As I did not like to have the DAC to be always on, I mostly disabled this feature during the review. My wish is that Wyred 4 Sound would consider adding a remote control capability to the future iteration of the DAC-1v2 for added convenience.

During the review, I set up the DAC-1v2 in various application settings to simulate the various scenarios the product will be used by the end users. Some users might use the DAC-1v2 as an external DAC to upgrade the DAC of their CD players, some might use it to augment their digital sources, such as CD transports or digital streamers, and some others might use it as a USB DAC for their computers or other digital sources with USB high-speed outputs. Hence, during the review, I tried the DAC-1v2 with the Yamaha CDC-902 five-disc CD changer and compared the sonic results I got with the sounds directly from the analog output of the changer. On another occasion I used the DAC-1v2 as the external DAC to my Bel Canto CD3t CD transport. The DAC-1v2 was also paired with the AURALiC ARIES G2 for testing it’s high-bit rate signal processing capabilities through it’s coaxial and USB connections. Classe CP-500 preamplifier, Bel Canto Ref500s stereo amplifier and NHT Evolution T6 speakers rounded out the downstream components used in the evaluation. My critical evaluation was only started after I let the unit run for significant hours to ensure it had been fully broken-in.

The DAC-1v2 is pretty much plug-and-play right out of the box. You need to enter it’s setup mode only if you want to change it’s default settings. For example, the default always-on blue-lettering display can be made dimmer or set to auto-off from the setup menu, which can be accessed by pushing and holding the up and down buttons while pressing the power button. The setup menu is relatively intuitive, and the manual explains each menu item in a relatively concise and clear manner. The DAC also provides several filters, which affects subtly the sonic results, some are more discernable than the others. Your taste will eventually determine which filter sounds best to you. I mostly settled with it’s default filter, which is called the apodizing fast rolloff linear phase filter, as I thought that was the one that fit my sonic taste the most.

When the digital optical output of the Yamaha CDC-902 CD changer (new retail was $500) was connected to the DAC-1v2, the resulting sound easily outshined the one from the changer’s internal DAC. The Yamaha CDC-902 was actually no slouch among the mass-market CD changers in the market, however the DAC-1v2 presented music perceptibly more lively overall with better dynamics texture, sharper focus, and higher details. In other words, the DAC-1v2 conveyed the musicality in the recording better.

The track Till the End of Time from the guitarist Earl Klugh’s Sudden Burst of Energy album (1996) contains details and dynamics that exemplifies this very point. Using the analog outputs of the Yamaha CDC-902, the resulting sound lacked texture and transparency in comparison to the sound processed through the DAC-1v2. The sounds of various instruments in the track were conveyed with perceptibly sharper focus and better details through the DAC-1v2. Also the DAC-1v2 projected a larger soundstage than what I got from the analog output of the Yamaha CDC-902, which overall made the music grander. 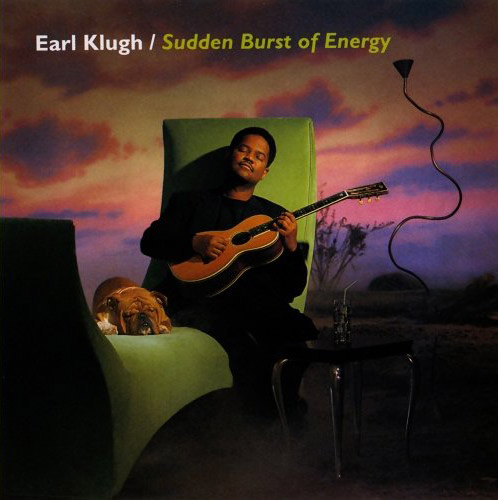 This experience suggested that the DAC-1v2 would be a great upgrade to get improved sonic performance of your existing mid-end CD player. Rather than buying a new CD player, it might be more cost effective to add an external DAC like the DAC-1v2 if the existing CD player has a digital output.

Moreover, the DAC-1v2 can handle multiple inputs to accommodate the digital to analog conversion of other devices.

During the review, I also paired the DAC-1v2 with my Bel Canto CD3t, which was a relatively high-end CD transport. The combination yielded very good sonic results characterized by high-degree of clarity, details, and effortless dynamics. The DAC-1v2 was capable of conveying music with seemingly the right pace and rhythm, making the whole listening experience enjoyable. Sonic balance across the frequency spectrum was very good. It’s bass response was tight and had sufficient energy to present music at it’s proper weight. It’s treble response had sufficient details and airiness without being dry. It’s midrange response was crisp and clear. Lady Gaga’s voice in the track Your Song from the album Revamp: The Songs of Elton John and Bernie Taupin (2018) sounded full-bodied with the right amount of sibilants. There was a slight trace of graininess in the vocals, which I noticed upon comparison with my Bel Canto DAC3.7, which was known to be an exceptionally smooth DAC. However, to put it in perspective, this might not be a fair comparison as the Bel Canto DAC3.7 carried more than three times of the DAC-1v2’s price tag. Moreover, this trait should not be a cause of worry, as it was not at the level that was distracting to the enjoyment of the music. The other sonic traits of the DAC-1v2, such as detail presentations, clarity, image, and dynamics, could hold their ground well in head-to-head comparison with the much more expensive DAC. 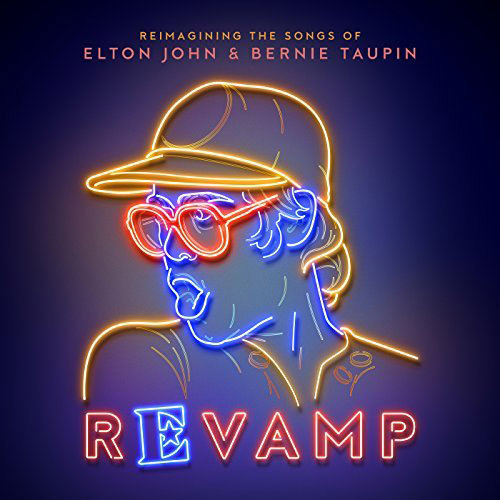 The Songs of Elton John and Bernie Taupin “Revamp”

The DAC-1v2 was also a very capable USB DAC. During my evaluation, it handled the USB signals from the AURALiC ARIES G2 that were within it’s processing capability without glitches. In general the DAC-1v2 identifies the signal type and locks-in to it very quickly.

Therefore I never missed the first few seconds of the signal played (due to delayed lock-in) when I changed the songs. Once locked-in to the signal, the DAC-1v2 displays the signal information (rate and resolution) on it’s front display, and performs the necessary processing. I tested it’s high sampling-rates processing capability by streaming various 352 kHz PCM and DSD256 music from my network storage and I am glad to report that the DAC-1v2 processed these high sampling-rate signals with no issue, producing high-fidelity sonic results as expected.

THE WYRED 4 SOUND DAC-1V2 is a solid performing DAC with the price that does not break the bank.

The Wyred 4 Sound DAC-1v2 is a competent DAC with the capability of processing the current high-resolution high sample-rate signals. It is solidly built and quite versatile in handling various digital inputs, which include USB input. During my review, the DAC-1v2 processed signals thrown at it within it’s specifications without any glitches. Wyred 4 Sound does not equip the DAC-1v2 with all the bells and whistles in terms of features, but the company does ensure the DAC delivers on what matters most: it’s sonic performance. The DAC-1v2 is not the company’s top-of-the-line DAC, but it sure produces high-fidelity sonic performance that will give even the more expensive DACs out there a run for their money.