Taps DasNovember 24, 2021DACs
Home
ReviewsDACs
Oooh, look at this little guy, it’s the brand new DacMagic 200M from Cambridge Audio! It’s their new top-of-the-range DAC and headphone amplifier with native MQA support, integrated Bluetooth with aptX, a more powerful headphone output, and ‘superior’ DAC technology. It has been purpose-built to improve the sound of your system.

Need a DAC? Need it fully specced out? Need it to look sexy as hell? Look no further. I’ve got just the thing. Well, Cambridge Audio does. And it’s a doozy. The DacMagic 200M is their new top-of-the-range DAC and headphone amplifier with native MQA support, integrated Bluetooth, a more powerful headphone output, and ‘superior’ DAC technology. It has been purpose-built to improve the sound of your system. Keep that point in mind. 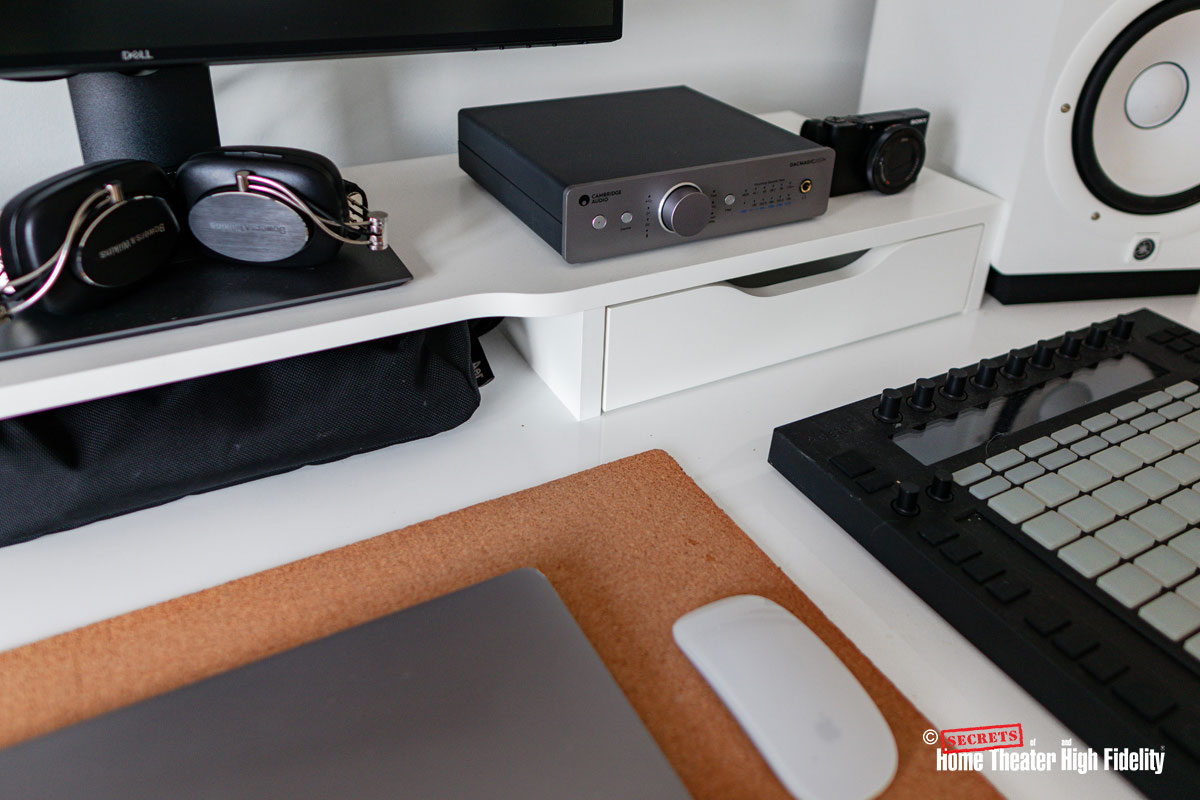 The DacMagic 200M arrived safely at my home in Toronto. I unpacked it. This is where everything sort of went crazy. We sold our house. We hadn’t yet bought our new home. But we were looking outside of the city. If you know anything about Toronto’s crazy housing market, then you know that it took some time for us to find the right home. We had to be out of our home two months before we got our new one. During that time, we planned to stay at our cottage in Prince Edward County. First-world problems, I know. PEC, as it is lovingly referred to, as the newly crowned; ‘Hampton’s of Toronto’ with about 50 vineyards sprinkled in. It’s gorgeous out here. And I love it. So, we packed everything up, put it into storage, and drove out here to the County with whatever we could bring and set ourselves up to live and work for the summer.

The downside of being out here is that our cottage is rather small, and the layout isn’t overly conducive to working. So, I had to reconfigure things to make it work. And because we keep the place looking beautiful and perfect for getaways it is not an audiophile haven. Well, not now anyway. We have a simple Bose Bluetooth speaker on the main floor and the Fluance Ai60 powered bookshelves in the basement. Then, much to my wife’s chagrin, we also had a couple of deliveries. The Rotel A14MKII Integrated Amplifier and the Fluance Ai61 Powered speakers came in for review as well. 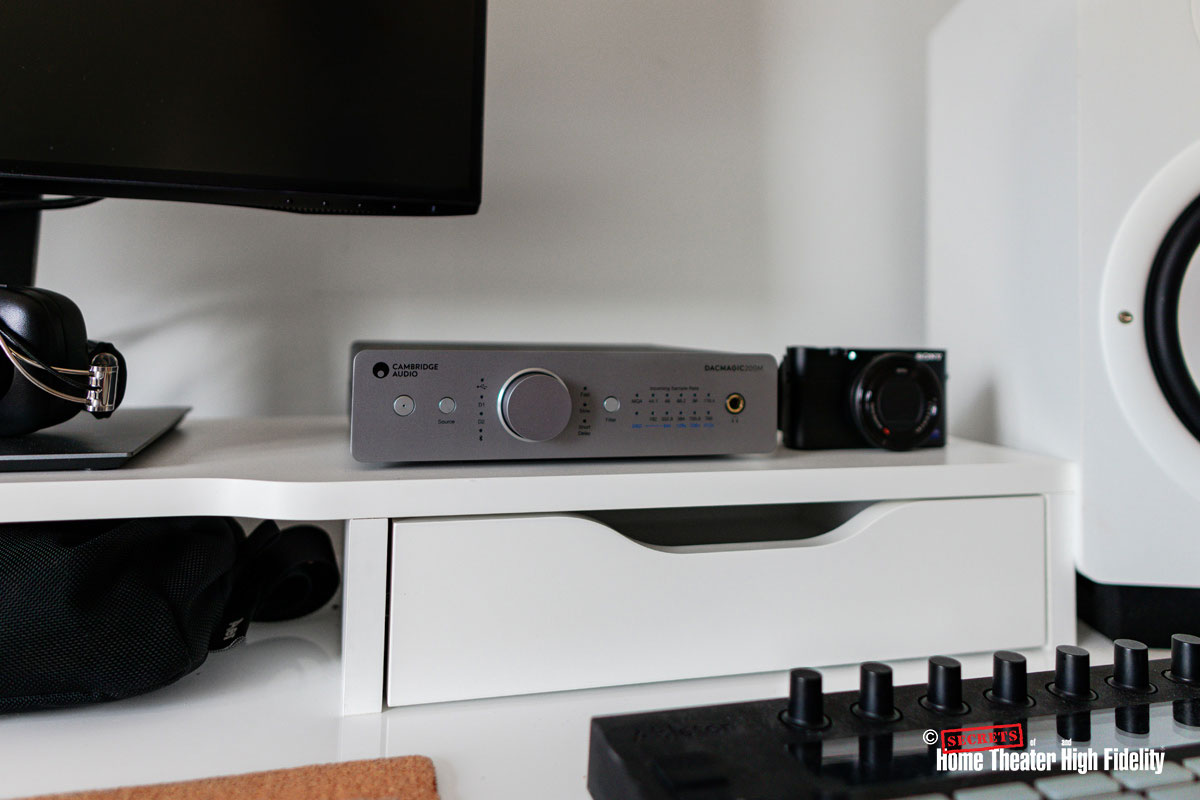 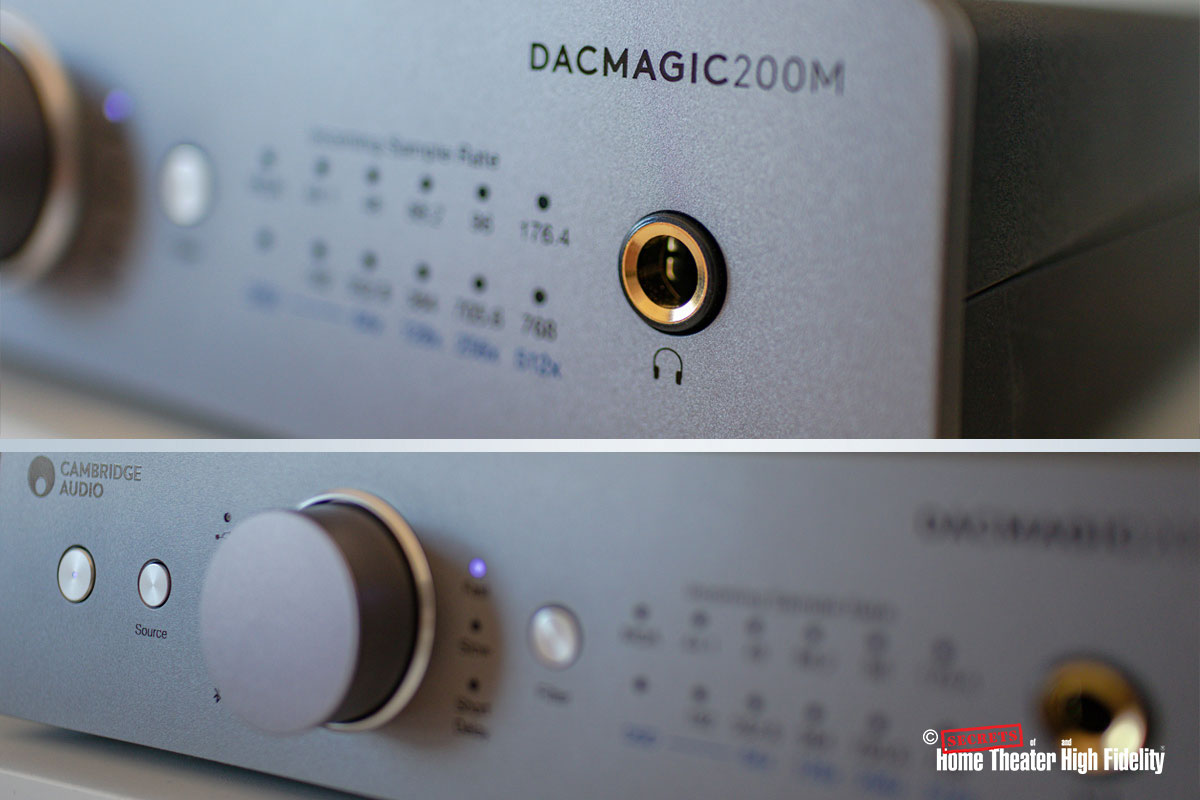 Visually, the DacMagic 200M is a slick-looking, expertly built steel and aluminum box that measures just 2.0 x 8.6 x 7.6 inches and is finished in the same ‘Lunar Grey’ that has become synonymous with all Cambridge Audio’s latest gear. It fits right in with the industrial design language of their CX Series of components. While the casing is an exercise in minimalism, the front facia is not. It’s fairly busy with the entire right side being two rows of LED lights that indicate the sampling rate you’re listening in. From 44.1kHz and up, way up to 32-bit/768kHz (PCM) and DSD512 natively.

LEDs for MQA and DSD are also listed and will light up when they are detected. To the left of all that, is a button for selection of filter type, followed by a column of LEDs indicating which filter is active then a large (relative to the size of the facia) volume knob, then LEDs for source type, and a source button and lastly the power button. Sounds like a lot. But it doesn’t look it. The industrial design team did a great job of keeping all the buttons and lights as understated as possible while keeping all of the essential information clear and organized. 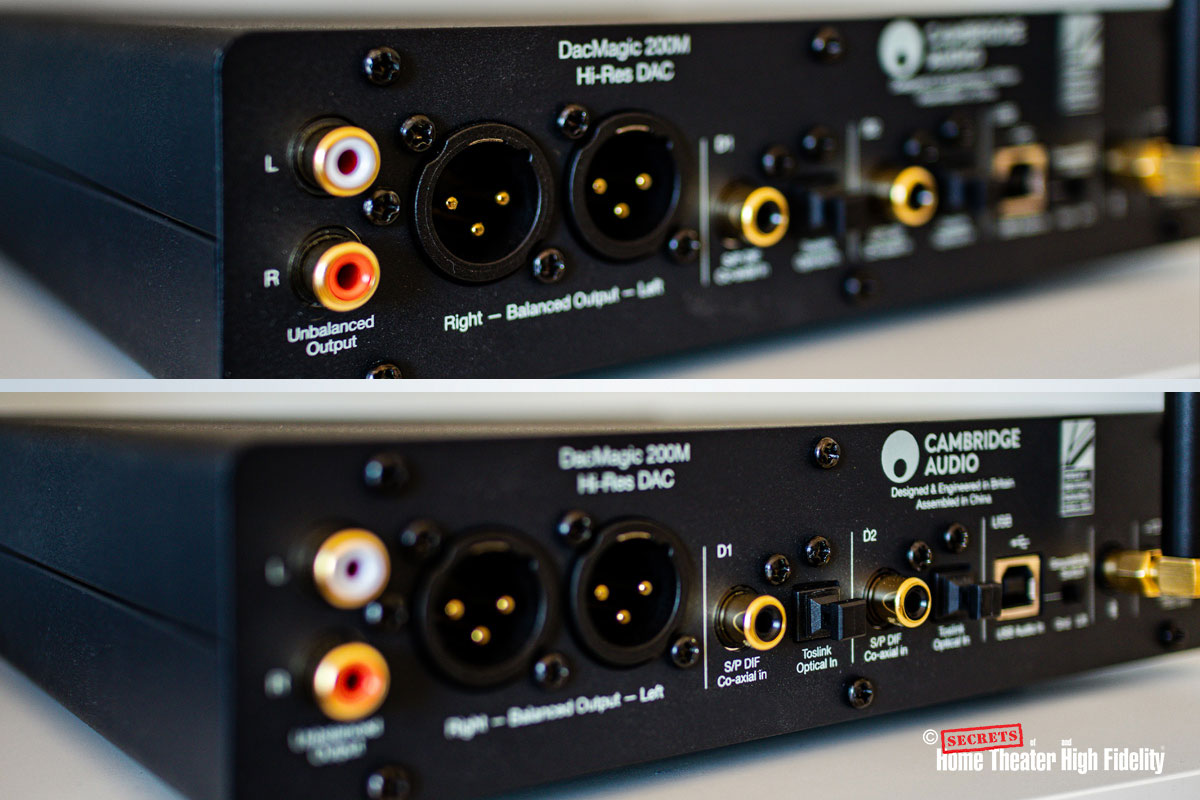 Around the back is where we see the DacMagic 200M’s connectivity on full display. Digital inputs include two coaxial, two optical, and one USB type-B for sources like laptops, CD players, game consoles, and Blu-ray players. There’s integrated Bluetooth aptX for wireless playback from smartphones or tablets. The DacMagic 200M also has both balanced and unbalanced analog outputs. And lest we forget about that headphone amp; it’s a quarter-inch jack, with traditional class A/B amplification and a reduced output impedance for “more power, less distortion, less noise, and tighter audio control.”

Inside this little grey box are dual ESS Sabre DACs. These new chips can handle PCM and DSD signal inputs at a higher resolution than before. The 200M is a dual-mono configuration, meaning the left and right channels are processed separately. Which should yield a precise and distortion-free listening experience. There are three pre-set filters included to help reduce ‘noise generated by the digital-to-analog conversion process, with each filter offering a different sonic option depending on the source material.” 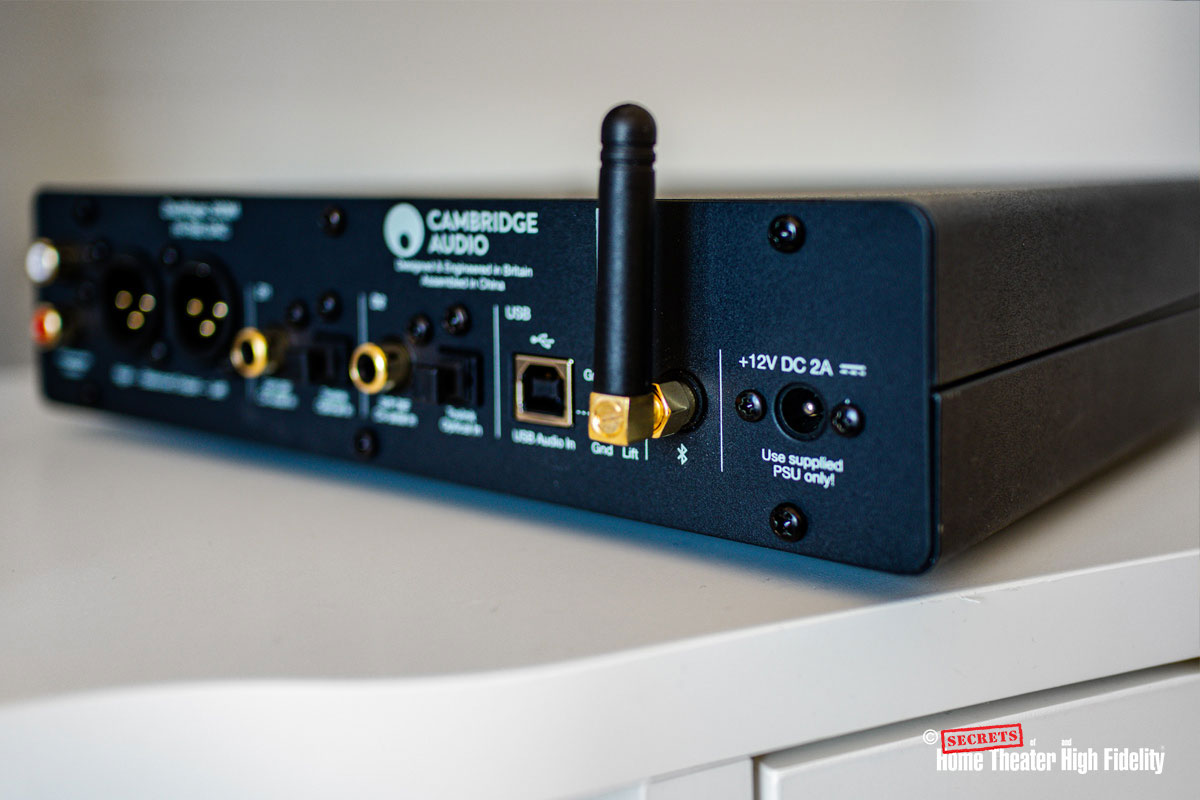 The DacMagic 200M is Cambridge Audio’s first product to natively support MQA files. This will be a boon to those who stream from Tidal and have access to MQA files. I didn’t test out the MQA functionality. The internet at our cottage is rural. This means that streaming high-quality files in the background renders our cottage internet unusable. That, and I don’t subscribe to Tidal. I’m a Spotify guy.

There is no remote for the 200M. One could call this an oversight. But I dunno, in a desktop set up reaching over and adjusting the volume isn’t a big deal to me. I guess it could be a pain to have to keep getting up to adjust the volume, but should you have a remote for your current amp, you can simply set the 200M to fixed volume mode, and Bob’s your uncle. 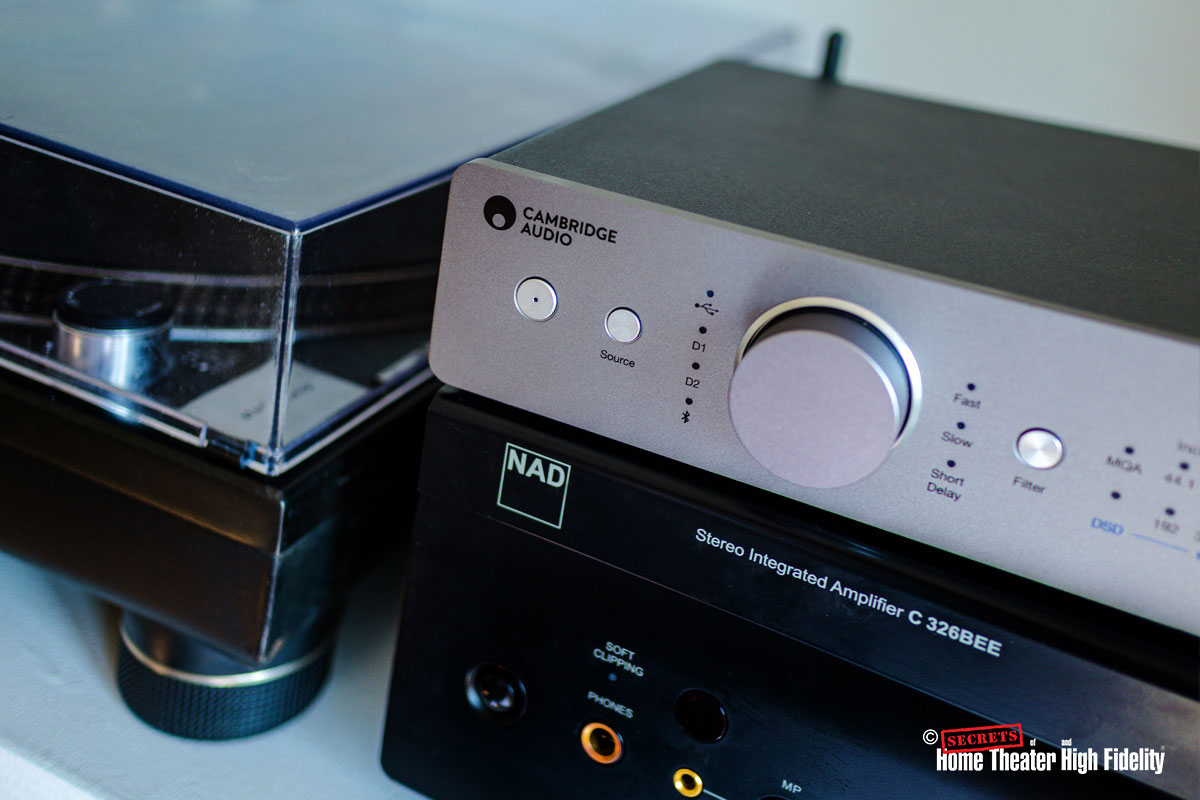 The home office in our cottage basement consists of a DIY desktop on Ikea legs. On the desk, I have a Dell Monitor, hard drives, NAD 326bee, Rotel A14, B&W 685’s, and the DacMagic 200M. The monitor doubles as a USB-C hub. I have all the peripherals connected to it and a single USB-C cable that connects to my MacBook Pro. For this review, I switched between the NAD and Rotel via RCA outs. For headphones, I brought along my B&W P7 wireless headphones but with a wired connection. 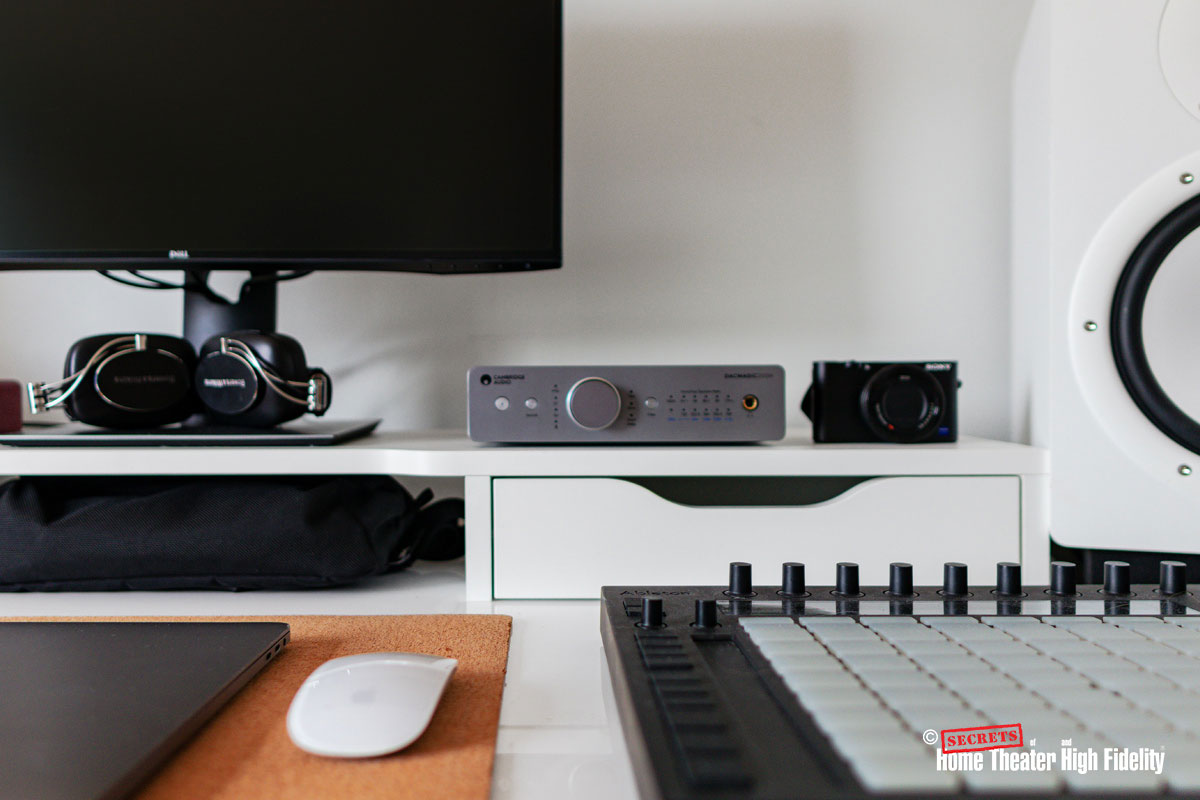 I love unpacking Cambridge Audio’s gear. It’s an experience that is much like opening an Apple product. The focus on better packaging helps to elevate the luxurious feel of their components. In the box came first a black material logo branded bag which wraps and protects the DacMagic 200M, a power cord, multiple plug options, and a Bluetooth antenna.

My aging NAD 326bee integrated amp lacks digital inputs so the addition of the DACMagic 200M makes it more useful for day-to-day use. That’s what I connected first, and got to listening via Bluetooth with my iPhone as the source.

The inclusion of the DacMagic 200M didn’t make much of an audible difference to my NAD 326bee. It simply allowed me to connect all things digital to my trusty NAD 326bee. And in that sense, it’s a successful product. And that’s the review there in a nutshell. This DAC like most others is perfect for people with equipment that lacks digital connectivity.

When I’m playing music through iTunes via my MacBook Pro, if the Cambridge DacMagic 200M has a ‘sound’ then I would say that it is decidedly neutral because I’m not hearing a sound profile. I’ve connected it to three different brands of budget-conscious amplifiers and all of them sound like themselves. Connected to NAD, it sounds like the NAD; connected to Rotel, it sounds like Rotel… You get the point. Others might have differing opinions, or have better hearing, but I’m not going to tell you I hear an audible difference when I don’t. 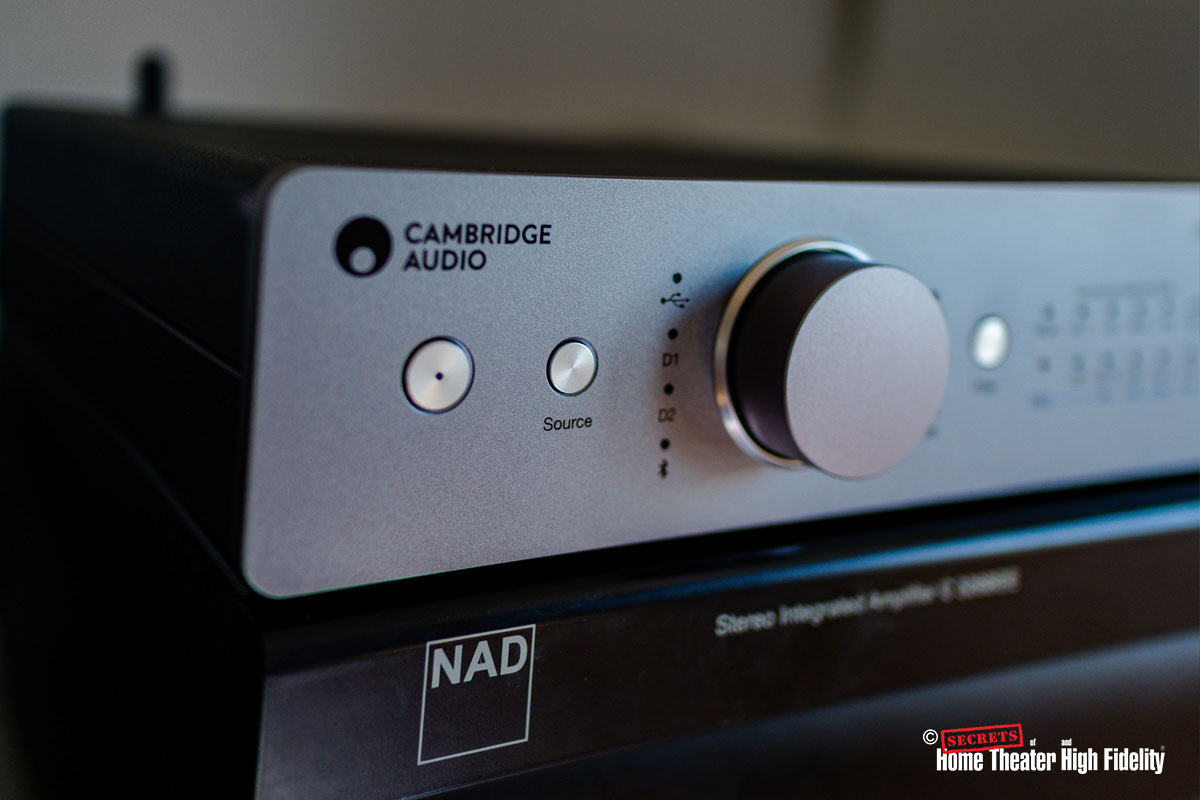 I mucked about with the three digital filter settings and again, if there are audible differences between them, they are slight, and you would need better gear or better ears than mine to distinguish between them. I left it on Short Delay for no good reason at all.

Music played from an iPhone via Bluetooth has the usual slight dropoff in quality, but you really have to listen for it. It’s not audible enough to turn me away from enjoying some good music. And that’s what it’s all about here, listening to some good music. 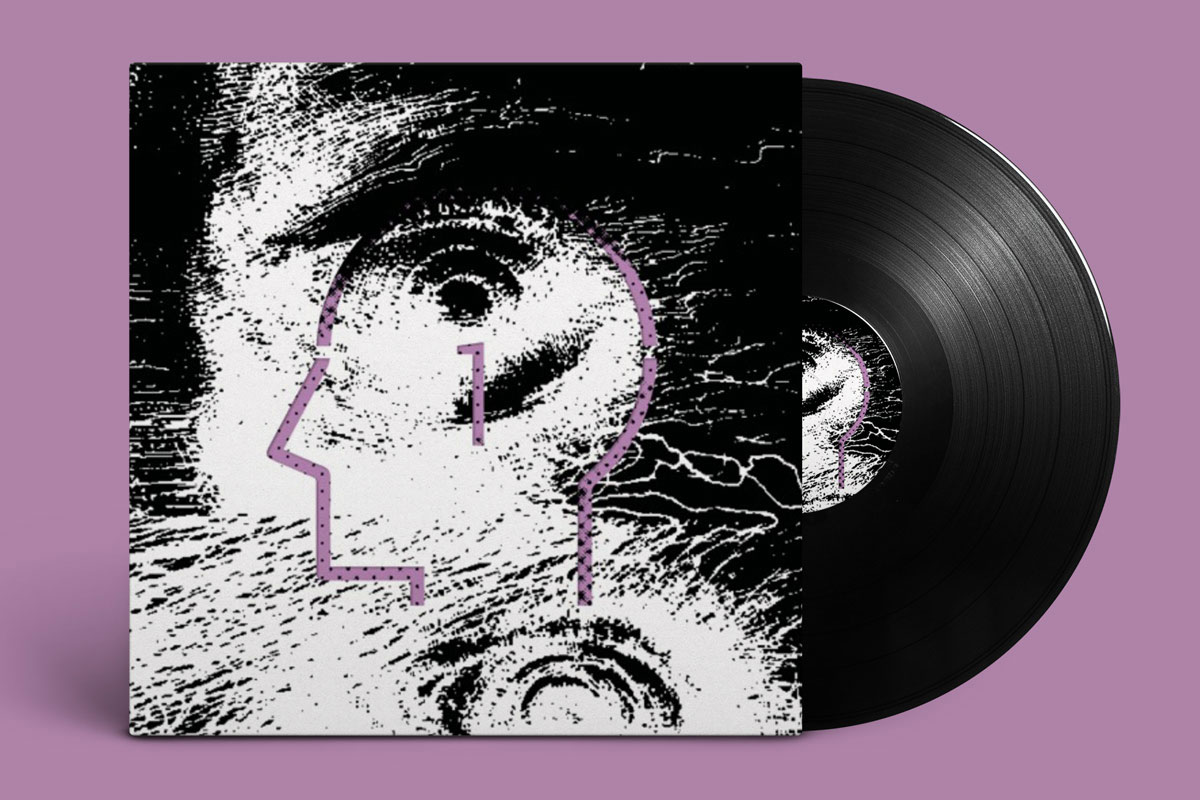 When listening through my B&W P7 headphones straight from the DAC, the presentation seemed neutral. For the best impression of the sound, one would have to listen through headphones to make that conclusion. The mids shine and the bass packs a punch. It’s sort of akin to the sound that I got from Cambridge’s Melomania 1+ Wireless earbuds only much bigger.

With this tune, EPROM’s Dangerous Sound, I imagine it was his intention to smash you with sound. I feel like he succeeded. No, it’s not the subtlest of tracks, nor would it be a track to comb over the intricacies of a sonic presentation. But I listened to this track for the first time and subsequently over and over via the DacMagic 200M and loved every second of it. 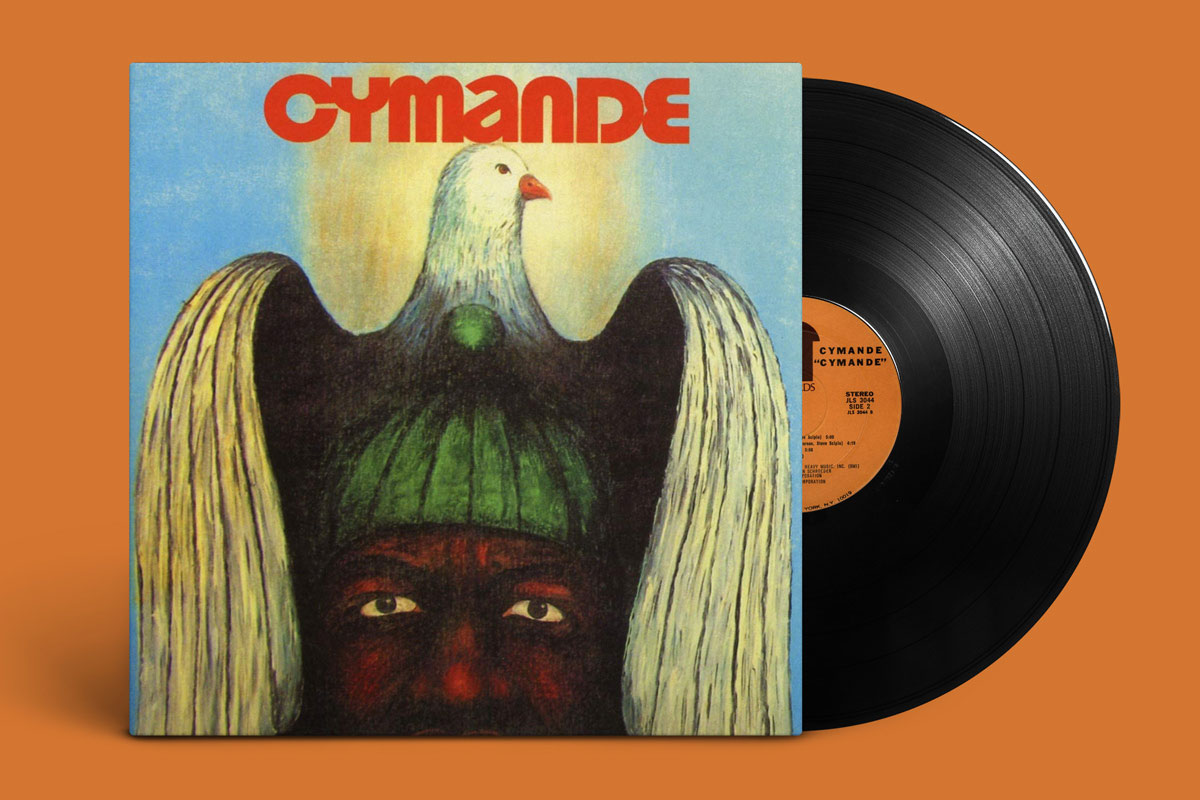 I can thank the golden age of Hip-Hop for bringing this tune to my attention. None of the samples do the original justice though. It’s a banger of a track that starts off slowly and builds. I listened mostly through headphones to see if the neutrality waivered in the slightest. If you value a more neutral presentation in a headphone amplifier, the DacMagic 200M is a great choice. It’s not adding or taking away anything. It’s just doing its job. Making the conversion from digital to analog seamless and easy, and then staying out of the way. And to me, this might be the best thing about DacMagic 200M. 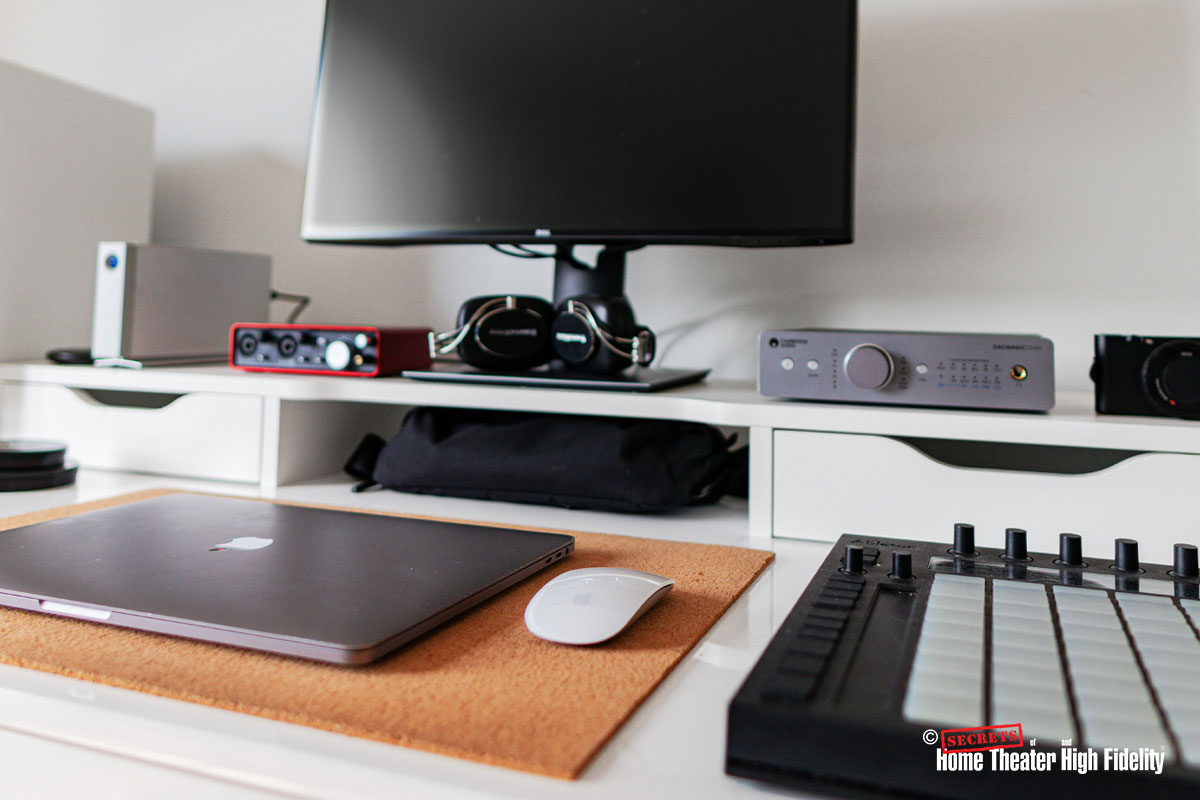 This is a well-spec’d piece of audio gear. It ticks all the right boxes and adds a ton of functionality to keep audiophiles happy; with a sensible price to boot!

So, did the Cambridge DacMagic 200M knock my socks off and revolutionize the way I listen to music? Yes and no. My associated equipment at the time of this review would not be the kind you would use for critical nitpicking. What it succeeded in doing was breathing new life into my trusty old NAD 326bee integrated amp by adding modern connectivity. I would wholly recommend this to anyone looking for a full-featured DAC to complement their setup. In the future, should I be on the market for an upgraded amplifier I will most likely be looking for a simple power amp, knowing that a product like the Cambridge DacMagic 200M exists to take on the source connection and DAC duties.