On June 16, 2020, Columbia Pictures released Volume 1 of their series Columbia Classics on 4K, which includes six films: Mr. Smith Goes to Washington, Lawrence of Arabia, Dr. Strangelove, Gandhi, A League of Their Own, and Jerry Maguire. I am reviewing them one at a time for expediency. The second one is . . . 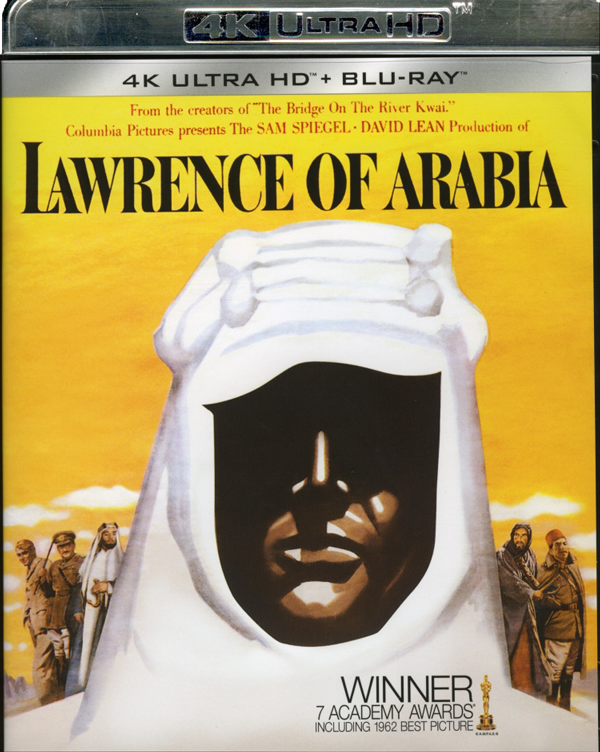 Entertainment:
Video: The movie is worth watching just for the photography.
Audio: Remastered with modern surround formats such as Dolby TrueHD 7.1 and Dolby Atmos.
Extras: There are some missing features. A replacement disc will be sent to all who purchase the set.

Lawrence of Arabia, released in 1962, is a fabulous movie. I remember seeing it almost 60 years ago.

It was shot in 70 mm and is finally available in 4K. Fortunately, the Digital Intermediate is 4K, so the 4K disc is glorious.

The story is true and is about T.E. Lawrence, a Lt. in the British Army, who is sent to Arabia in 1916 as a British Liaison to unite the numerous tribes in their battle against Turkey during WWI. Turkey was an ally of Germany.

He meets with Arab Prince Faisal (Guinness) and suggests that they fight using British methods, but ends up working with them to fight using Arab warrior tactics.

This screenshot (below) illustrates Lawrence in the desert, looking at himself in a reflection from a knife. Peter O’Toole did it on the spur of the moment, not in the script. The director, David Lean, said, “Clever fellow,” and the shot stayed in the final release.

The movie is a masterpiece in all aspects.

Click below to see reviews of other movies in this set of six:
A League of Their Own