Up NextColumbia Classics 4K UHD Collection Volume 1 – Movie Review 3
On Amity Island in New England, everyone is ready for the July 4 weekend that will be a big deal for all the local shops and restaurants that cater to vacationers.
Specifications 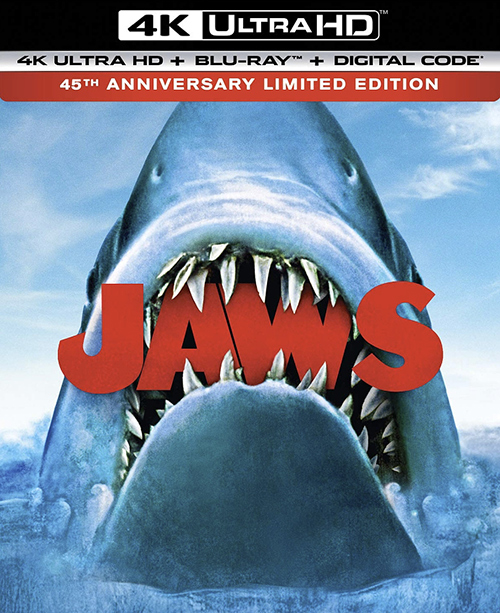 Entertainment:
Video: As sharp as can possibly be for anamorphic photography. 4K Digital Intermediate.
Audio:

The voices are in mono, as per the original production. I am not a fan of mono. The music has been remastered in stereo, and there are some new surround sound effects.
Extras:

Unfortunately, there is a shark attack and a girl is killed.

A scientist named Hooper (Dreyfuss) shows up to check things out, and a shark is caught.

While the local officials think the problem is over, Hooper thinks this is not the shark that killed the girl.

After another person is attacked, the town hires a local fisherman, Quint (Shaw) to catch and kill the shark. The town sheriff, Brody (Scheider) and Hooper go along.

They quickly discover that they are going to need a bigger boat.

This is one of the scariest movies I have ever seen. It had a low budget, and it was Spielberg’s third movie project. It had an amateurish home-movie look about it because it was so early in Spielberg’s career, but it had flashes of brilliance that predicted a fabulous career ahead.

The mechanical shark did not work very well, and it is obviously a fake, but it is so terrifying, one forgets it is a fake.

Quint’s recounting of his experience on the USS Indianapolis sinking during WWII, with sharks killing so many of the survivors in the water is one of the most intense scenes in movie history.

If you are a fan of this movie, and you have a 4K UHD player along with a 4K UHD TV, this is a must-have version.