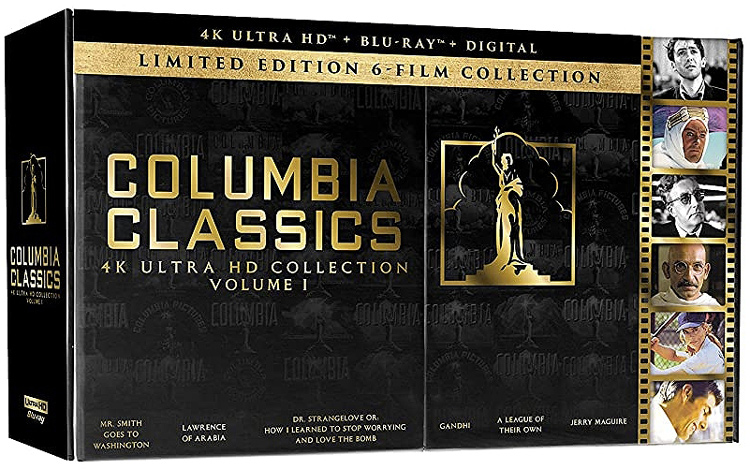 Columbia Pictures just (June 16, 2020) released Volume 1 of their series Columbia Classics on 4K, which includes six films: Mr. Smith Goes to Washington, Lawrence of Arabia, Dr. Strangelove, Gandhi, A League of Their Own, and Jerry Maguire. I am reviewing them one at a time for expediency. The first one is… 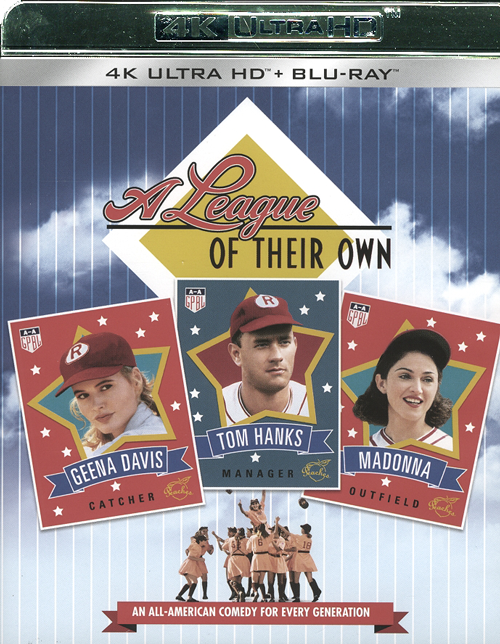 Video:
Audio: Remastered with modern surround formats, and it works well for sounds from the crowds at the stadium.
Extras: Includes deleted scenes and episodes from the 1993 V series by the same name.

A League of Their Own was a surprise hit in 1992. I enjoyed it immensely.

During World War II, professional baseball players were in the military rather than on the baseball fields. The public at home in the USA wanted to watch some baseball games for diversion.

Many teams were formed, as part of the All-American Girls Professional Baseball League (AAGPBL), and this movie is about one of them, the Rockford Peaches.

Tommy Dugan (Hanks) manages the team. Dottie Hensen (Davis) is from Oregon, and although she is a natural athlete, she would not join the team without her sister Kit (Petty). Dugan is an alcoholic, so Dottie takes over, and the team flourishes.

There are all kinds of special characters on the team, including All-the-Way Mae Morbadito (Madonna).

The movie bounces back and forth between the present, where the surviving members of the team meet at Doubleday Field and the National Baseball Hall of Fame and Museum for a ceremony, and the 1940’s when the team was playing.

One nice thing here is that baseball games are a big part of the story. It’s not just about the issues of creating a women’s baseball league, although there are things that are covered, and it certainly was not all fun and games, so to speak.

Some of the characters in the film have real persons as a basis who were on the actual women’s baseball teams, which always makes a movie more interesting.

The story is very entertaining, as well as emotional, as most movies based on true history tend to be.

There is one audio quote that will be enduring, “There’s no crying in baseball.”

The 4K release is extremely sharp, in part because the Digital Intermediate (DI) was 4K instead of the 2K DI’s that many modern movies tend to be due to the extreme demands that CGI places on 4K editing. Old movies don’t have much CGI if any. This I find to be sadly ironic, and I hope that computer power will soon allow all 4K movie releases to have been 4K all the way from original filming to the final release at theaters as well as on discs.