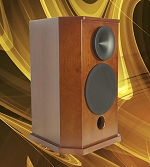 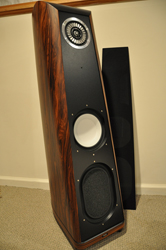 Very few speaker makers, (and I use that phrase specifically because of the craft involved) garnish the respect and admiration of Thiel Audio. Up until now, most of my personal experience with Thiel speakers other than at the audio shows has been in someone else’s home. The best anecdote I can share was from CES several years ago when partnered up with Bryston amplifiers and Bryston’s new digital media player, the Thiel CS2.4SE’s played Crash Test Dummies’ Superman Song and I was blown away. Bryston’s remarkable amps notwithstanding, the earthly, textural rendition and especially Brad Robert’s deep bass baritone voice from the Thiel’s remains one of my favorite show demonstrations of all time.

Sometime around 2007, Thiel introduced what was then (and still is) an astounding speaker in the CS3.7 which for the most part was significant because Thiel was engineering their own driver designs, versus buying OEM. The 3-way design was pure Thiel, soft and rounded yet muscular in design, Jim Thiel showcased the corrugated midrange and tweeter “coincidentally” mounted configuration. The CS2.7 is the result of that success in a more affordable package. 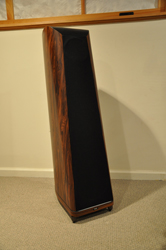 The CS2.7 is unmistakably a Thiel; anyone familiar with the CS line-up will recognize the styling. Design aside, Thiel emphasizes that old adage, form and function; technically critical and reinforcing the notion of pushing successful fundamental ideas forward. Inert speaker enclosures, driver design, there is nothing in this speaker that should surprise anyone.

The CS2.7 is a 3-way speaker standing about 42″ tall with the carpet spikes and no lightweight at 77 pounds. The cabinet shares the same construction of the CS3.7 with multiple laminated layers of bent plywood, not MDF most commonly used nowadays because of the ease of CNC machining. The overall construction is impeccably detailed. The dark cherry veneer on the sides and base is beautiful as it curves around to the front where it meets the grill fabric. Although they avoided the transition from horizontal to vertical on the top by placing a black matt finish that also runs down the back of the speaker. Frankly, I actually like the design of the CS2.7 over the 3.7, but that’s just me.

The face is slightly sloped back I’d say about 15 degrees, thereby angling the front baffle tilting the driver’s axis alignment so that the sound reaches your ears at the same time. This is critical in the concept of time coherence. Likewise, the front baffle curves away on the sides reducing edge refraction and also tapers from the floor on up allowing for more space on the face for the larger woofer driver – form and function.

Most times you don’t hear much about the screen grill, but Thiel has designed it flush to the face, like a windshield on a car these days. It’s recessed enough for the cleanest of detailing and unlike most speaker grills held in place by pressure pegs, Thiel achieves the detail by holding it in place with magnets. 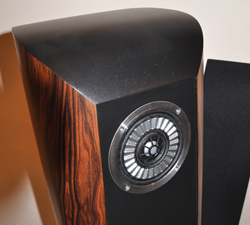 The heart of the driver compliment on CS2.7 is the heart of Thiel in the tweeter/midrange driver known as the coaxial/coincident design – the 1″ tweeter and 4.5″ mid-range are aligned with the tweeter within or more accurately, centered. Both drivers are aluminum for stiffness and reduced mass, thus improving speed and accuracy. Sitting in a die-cast chassis, they also share very powerful neodymium magnets which contribute to lowering distortion by keeping the throw distance short. Most noticeable however is the corrugated design of the mid-range cone, the ribbed diaphragm is stiffer, reduces coloration and provides for an even frequency response.

Although not on this speaker, Thiel does employ similar design and technology in larger woofer using very strong, rigid aluminum in a “star” design found on the CS3.7. On the CS2.7, the 8″ aluminum woofer with a 2″ diameter voice coil is complimented by a passive “racetrack” shaped radiator. 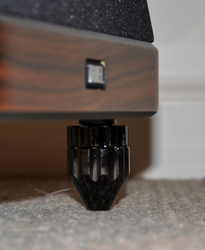 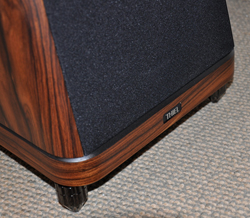 These 4 ohm speakers are hard to drive, I’ve always heard that about Thiel and now at home, I will confirm that to be true. Although the manufacturer recommends a minimum of 100 wpc , I did need to throw everything I had at these speakers to get them to sing. This isn’t the first time, both the KEF Reference 205 and the Canton 5.2DC floorstanding speakers also needed all the punch I could muster. So although the Thiel is not alone, it differed because it went from good to great, unlike the incremental differences in the other similar speakers.

I will admit though that I loved the CS2.7’s best with tube gear with an Onyx tube amplifier along with and without the boosting Musical Fidelity Superchargers. For the most part I used a Parasound Halo A21 amplifier and the P3 preamplifier. I’d had the speakers long enough to come back to this review when Parasound sent me the P5 to review, huge difference from the P3. Yes that’s another story. Sources were from a Marantz SACD player and turntable, an OPPO Blu-ray player, high-res files through a Benchmark DAC and I also used a Bluetooth device from Mass Fidelity called Relay, again another story and forthcoming review. All cabling including the USB cable, speaker cables, interconnects and most power cords from Transparent Audio.

With my modest sized listening space, I couldn’t say placement was critical with the CS2.7’s. I found their off-axis response extremely uniform. I ended up with them about 8 feet apart and slightly toed-in while I sat about 9 feet back. They were placed about 2 feet from the rear wall and about 18 inches of the side walls.

The THIEL CS2.7 Floor-standing Speakers In Use 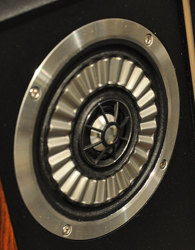 This is not a relaxed or laid-back speaker, at all. Mellow is not the name of the game here. In fact the more you push, the better the results. Warm is not a characteristic I’d use either for the CS2.7 which doesn’t suggest a lack of smooth delivery but rather an overall sound that is accurate in detail and transparent. The CS2.7 is hardly bright, or in excess of sibilance either and I never fatigued listening to them. Having said that however, I still found my preference was with a tube amplifier, what you may give up in bottom end you get back in richness.

The Thiel CS2.7 can play big or spacious, yet has such finesse from delicate highs to fuller mid-range cleanliness and bass that is taut and controlled. Control being the key word there, the entire frequency spectrum is so well-represented, I couldn’t find fault in any range. At no time did I sense anything more than a balanced presentation. In fact the CS2.7’s reproduced the full dynamics of any recording I threw at them. The tonal quality of instruments is superb, pianos sound full-bodied, acoustic guitars warm, plucky, and electric guitars sharp and clean.

I couldn’t help but play Alison Krauss + Union Station’s Live recording which highlight the bands Bluegrass roots. (Totally irrelevant is that it reminds me of listening to Bluegrass music in high school at my girlfriend’s house as her mother would play her son’s bluegrass band’s music on cassette for me, new to the genre, it all sounded the same to me, yet her mother would clap her hands and as each new track played, she repeated, “oh this is my favorite”). The recording is top notch, Alison’s voice is sweet, her breathing revealing and transparent, while the fiddle, guitars and banjo playing is remarkably rendered.

A vinyl re-issued 1963 recording from Johnny Hartman, I Just Dropped By To Say Hello emphasizes this baritone’s velvety and revealing voice on the CS2.7’s. He can reach down deep and bellow his voice and switch subtle octaves. The Thiel reproduces that transition so eloquently and his duets with the tenor sax and the accompanying piano reach sublime levels even for a studio recording.

I was so impressed by the absolutely clean bass that I forgot I was listening for it. The CS2.7 is so seamless from driver to woofer that I needed to replay the same track because I wanted to be more clinical in my audition; I wanted to hear the transition. It’s almost too easy and cliché to say bass is full, extended and tight but oh so very accurate. Never did the Thiel’s emphasize bass where it became bloated and fat.

Listen to Verdi’s Requiem, Dies irae or God’s wrath comes down hard at the beginning, the full orchestra combines with the heavy forceful bass drums. The CS2.7 renders the bass with tight attack transient with full control and gusto.

I couldn’t help but listen to a Blu-Ray with just the pair of CS2.7’s playing. Nicely recorded is Chris Isaak, Live in Concert has both a DTS-HD Master Audio version in 2.0 stereo and 5.1 surround. The concert through the CS2.7 is so well articulated and engaging, from the accordion off stage left to the sweet guitar at stage right. The performance is well balanced and the “soundstage” is wide and deep with the band placed across the stage. The engineering places you square in the middle and a few rows back. Isaak’s voice and as his backup singers is precise, warm and clean.

Likewise with Chris Botti at Symphony Hall in Boston, running the PCM Stereo version (48 kHz/24bit) I found myself immersed in the stage performance by all his artist guests. I especially enjoyed John Mayer’s rendition of Glad to be Unhappy made popular by Frank Sinatra. The CS2.7 emphasizes his raspy voice with a distinct character and richness. On other tracks, Botti plays the spectrum of musical styles from classical to rock and his aged trumpet sounds brassy and texturally “right” on the Thiel’s. More so, the musical image of his playing on stage and the room acoustics so prevalent, the CS2.7’s disappear. It only becomes the musician, the stage and the room.

As I get older I’ve begun to prize those things that have meaning to me, not many but just a few things; my Eames chairs or my Boxster for examples. None of these inordinately expensive as I’ve purchased them all used, well used in fact but I hope they will always be with me. I’ve never felt that way until recently about audio gear, I’ve never fallen so in love with anything that I wasn’t willing to part with it. But my favorite hobby has changed and I now look at gear the same way, I’d like to enjoy something so much that I’d like it to be with me forever. The CS2.7 comes oh so close to that status.

In purchasing a Thiel speaker, my sense is that you’re getting the very best effort from everyone involved, from the concept, design and engineering to fabrication, it feels like you’re buying the love and passion that any craftsman puts into a piece. When I look at the CS2.7, I could imagine staring at it in 20 years and thinking I made a wise investment. It could very well be as timeless as any speaker and it will be talked about fondly as long as we listen to music from a box pushing air.

The Thiel CS2.7’s enter my house with the highest of expectations; Thiel’s stellar reputation, the highest praise from respected audio reviewers, along with my own experience, I was prepared for an amazing audition in my own listening space. I won’t exaggerate, I loved the CS2.7. Consider that their flagship CS3.7 is under $15,000 for a pair and their low end CS1.7 is under $4,000, it would seem reasonable to consider them affordable. When I heard the SCS4T’s (the floorstanding version of their SCS4’s stand-mounted speaker) a couple of years ago, I was smitten enough to consider a pair. But hearing the likes of the CS3.7 made you want those and now with the CS2.7’s at under $8,000 for a pair opens new possibilities. And the CS2.7 deserves serious consideration from Secrets for speaker of the year honors.