When I reviewed the Marantz AV8802 processor late last year, I mentioned that Marantz was planning on offering a free upgrade to DTS:X, which is the competing 3D surround format from DTS. While the AV8802 was already an amazing product with support for Dolby Atmos and optional Auro-3D, the inclusion of DTS:X would definitely round out the processing options. At the time, there was also plenty of uncertainty as to whether DTS:X would play nicely with the speaker layouts needed for Dolby Atmos and the Auro-3D format. This past April, Marantz delivered on their promise to release a free upgrade to several of their receivers and processors and that upgrade added DTS:X processing to the AV8802 and AV8802A models. I had the opportunity to play with the upgrade and I wanted to share my impressions.

First of all, I have to give Marantz high marks for making this a very approachable upgrade. With the AV8802 connected to my home network, the processor displayed a new firmware notice announcing the new functionality. It estimated a 55 minute install time which I found to be accurate. The suggested link to the Marantz site also provided much more detailed information on the upgrade. 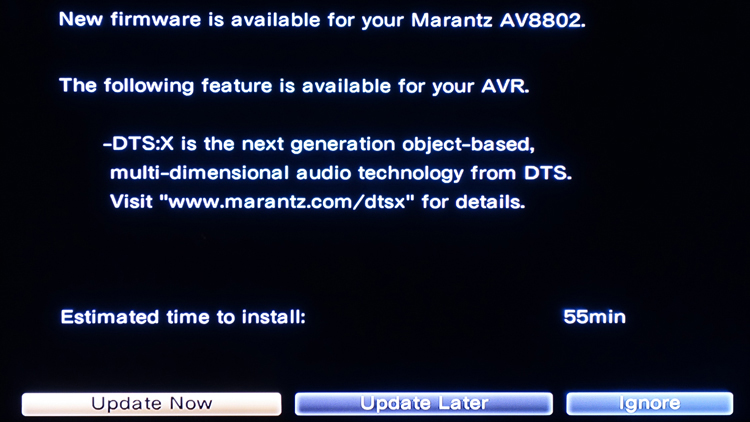 If I didn’t have the time to update at that moment, Marantz thoughtfully included an option to offer a reminder or to update when the AV8802 went into standby. This type of user interface design is exceptional in an AV product and I appreciated it. 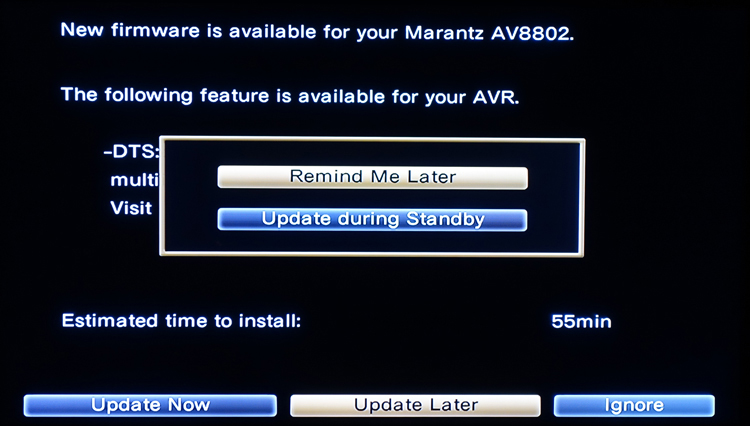 So what happened after the upgrade, you ask? If I didn’t know better, the AV8802 seemed completely unaffected by the upgrade. There were no further prompts after turning the AV8802 back on and everything just seemed to function as before. Behind the scenes, the DTS:X upgrade removed the DTS Neo:X processing capability from the AV8802 and added support for the DTS:X object-based format and the DTS Neural:X upmixer. It also added two new surround parameters.

The first option is Dialog Control which is designed to allow the listener to adjust the volume of dialog in movies and vocals in music so they can be heard more easily. Since DTS:X treats sound, such as dialog, as objects, the dialog volume can be adjusted independently without having to increase the volume of other sounds coming from a particular speaker. The feature only works with DTS:X audio bitstreams that are enabled for this feature. The second surround parameter is named DTS Neural:X and it controls whether non-object-based audio is optimized for the speakers connected to the AV8802. I should also point out that this firmware upgrade added support for one more speaker configuration that is compatible with Dolby Atmos, DTS:X and Auro-3D. That configuration uses Front Height and Rear Height speakers. 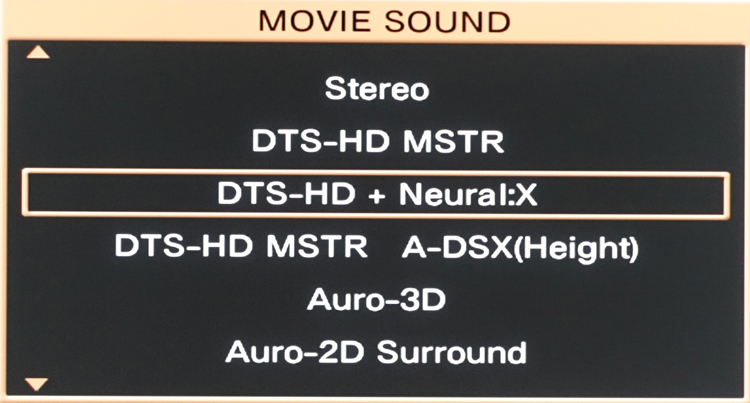 While I loved the fact that the AV8802 could now offer two new processing formats, I was disappointed that I could no longer decode a DTS soundtrack and apply the Dolby Surround upmixer. It worked before this firmware upgrade, and in my opinion, it should work after. I remember using Dolby Pro Logic IIx for years with DTS soundtracks, so I hoped this wasn’t a licensing issue. Marantz confirmed that this restriction will be removed in a couple of months in a future firmware update and that there was no licensing issue!

I was pleasantly surprised to find that the AV8802 supports DTS:X and Neural:X using whatever speaker configuration is used with the AV8802. In my case, the DTS Neural:X processor had no trouble making my Front Height and Top Middle speakers come to life. I appreciated that the AV8802 information overlays provided so much information about the input signal, sound processing and active speakers. 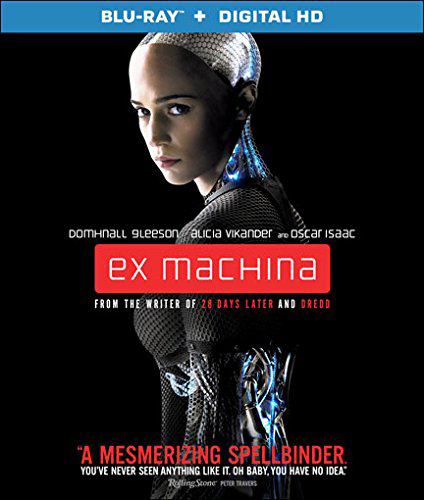 The first Blu-ray released with a DTS:X soundtrack was “Ex Machina,” an intelligent science fiction drama that explores the boundaries between man and machine and artificial intelligence. The AV8802 had no trouble decoding the DTS:X input signal passed from my Oppo BDP-105 Blu-ray player. The soundtrack sounded superb, but was surprisingly limited in its use of the height channels. With the exception of a couple of scenes, much of the benefit of the height channels was in adding to the ambiance of the film which definitely helped to draw me into the story.

The number of Blu-rays offering the DTS:X format is still very limited compared to the wide array of Dolby Atmos titles that are available. This leaves the DTS Neural:X upmixer as the primary change that most users will experience after this firmware upgrade. While the sound from DTS Neural:X was definitely immersive, it still sounded different from Dolby Surround. If you want to sample both Neural:X and Dolby Surround today, there is a way to accomplish this by sending PCM to the AV8802. I changed the HDMI audio processing on my Oppo BDP-105 to PCM, which tells the player to decode the bitstream and then send multi-channel high-resolution PCM to the AV8802.

Making this change exposes both Neural:X and Dolby Surround in the sound option menu. 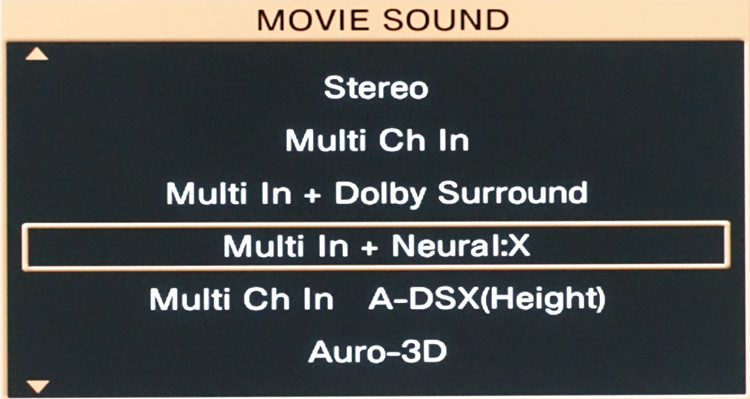 At this point, you can compare the upmixers and form your own opinion as to which you like better. I listened to some familiar portions of “Skyfall” that I typically use for reference, and I was surprised at the differences in the approach. In the bike chase across the roof of the Grand Bazaar, the Dolby Surround upmixer presented mostly ambient sounds and soundtrack in the height channels, while the Neural:X upmixer also included additional motorcycle sounds which added to the perception of the bikes racing on the rooftops. As the subway train crashes into the tunnel, the Neural:X upmixer included more content from the surround channels in the height channels, so there was more sound from above as the train crashes through the room. I enjoyed both presentations a lot and I especially liked the option to select one or the other.

The only drawback to using the PCM approach is that it doesn’t allow a DTS:X or Dolby Atmos soundtrack to be decoded natively in the AV8802. For that, you have to set the Blu-ray player to pass a bitstream.

THE MARANTZ AV8802 was Already an Amazing Product With Support for Dolby Atmos and Optional Auro-3D, the Inclusion of DTS:X Would Definitely Round Out the Processing Options.

I really appreciated that Marantz has included the latest DTS:X and DTS Neural:X formats as a free upgrade to their reference AV8802 and AV8802A processors. Offering this type of upgrade helps protect consumer investment and is a good thing for an industry that all too often encourages obsolescence. While I enjoyed listening to a DTS:X soundtrack, I would like to see much more content become available before encouraging the upgrade. I am thrilled that Marantz is planning to restore the ability to process DTS soundtracks with Dolby Surround.