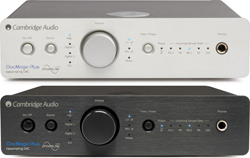 Introduction to the Cambridge Audio DacMagic Plus

Cambridge Audio has been in the audio business for quite some time and one of their more popular products in recent history, the DacMagic has undergone an update. The new DacMagic Plus improves upon the DacMagic by adding support for 24/192 sampling rates, delivering better sound performance via new DAC chips and including a built-in headphone amp. It also upsamples all inputs to 24bit / 384kHz and reduces jitter via the Anagram Technologies Adapted Time Filtering 2 chip. The Plus even has support for wireless AptX (a high quality codec designed for wireless transmission) connectivity through the use of an optional Bluetooth device allowing for instant streaming of music from an iPhone, Android, or other BT enabled device.

The DacMagic Plus is a rather light weight and unassuming box, but given its relatively low price, the construction is more than adequate. The unit I received was in silver with a brushed aluminum faceplate, but the DacMagic Plus can also be had in a sleek, unassuming black.

You can setup the unit flat on a desktop, or to save space, it can be placed vertical using a provided foot. It is a nice looking unit, but there was one thing that bothered me just a bit… 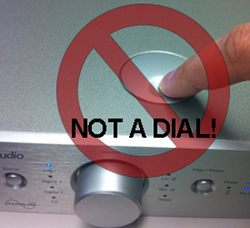 Every time I looked at the Cambridge logo on the top of the unit, it I wanted to spin it like a dial! Much to my distress, whence said finger was placed on top the logo, it did not spin around in circles!! Alas I quickly learned from my mistake and found that the volume knob does indeed spin and plays double duty as a pushable function button. It is a digital volume control so there is a bit of delay when turning the knob that can take a bit of getting used to.

On the front are blue LEDs that show selected input, filter, phase, and incoming sample rate. The source and digital filter is selected with a push of a button, but in order to change the phase, the filter button must be held down for a couple seconds. I really appreciated having the indicators for incoming sample rate. My initial assumption was that out of the box this unit would start playing 192 kHz files, but no matter what I played, the incoming sample rate was always set at 96 kHz. Having the incoming rate LED’s made it much easier to debug the situation and follow the appropriate steps needed to output 192 kHz files. Once that 192 indicator lit up I knew I had things configured correctly.

The DacMagic Plus is setup out of the box for plug-n-play USB 1.1 audio. However, this will limit file playback to 24-bit/96kHz. Via USB, 192kHz files can only be played back via USB Audio 2.0 and switching the Plus to that mode is not a simple matter of flipping a labeled switch. After reading the manual (I know right? Who reads manuals?!), I was able to easily perform this switch and enable USB 2.0 support. This is where the dual function of the volume knob comes into play since you push the knob in like a button in order to make your selection and restart the Plus in that USB mode. Decoding this data are two Wolfson WM8740 24bit/384kHz DACs configured in dual differential mode for each stereo channel.

I used the DACMagic with several pairs of headphones and hooked up strictly as a DAC for some 2 channel listening as well. The only source I used for this review was my laptop via USB. 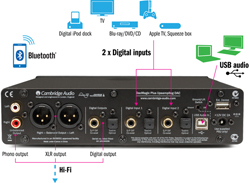 The other hidden function is switching the output mode of the Plus. By default, the DacMagic Plus is setup in Digital Preamp mode where output from balanced and unbalanced outputs is controlled by the front volume knob. The Plus also has a mode for fixed line-level output if you aren’t using it as a preamp. One should make sure to enable this mode if you will be using it with another volume control.

Cambridge Audio DacMagic Plus In Use

I’ve always struggled with the AKG701’s lean sound, especially when they are driven by a weaker portable device. Pairing them up with the DacMagic Plus gave them the punch they were missing and allowed me to enjoy listening to them again. Radiohead’s “Paranoid Android” sounded tight and energetic. They 701’s were still a bit bright for my tastes, but the difference between listening through an iPod and the DacMagic Plus was obviously in the Plus’s favor. With the new PSB M4U2 and a selection of music, including Of Monsters and Men’s Dirty Paws, I found the DacMagic Plus to deliver great dynamics. I preferred the linear phase filter setting with the PSB as it enhanced the midrange dynamics a tiny bit. Overall the PSB were a great match with the DacMagic and they provided a full, clean, and dynamic sound.

When used with HiFiMAN HE-400, the DacMagic Plus was a pleasure to listen to. For a planar magnetic design, the HE-400’s are fairly efficient and were easily driven with the Plus. This was the ideal combo for my tastes and I was able to enjoy many hours of listening while at my desk working. 2L Recording’s “Beethoven: Sonate 32” sounded very good at 192kHz, but in a blind A-B test I am not sure I would have been able to tell the difference between the 96kHz version. My brain convinced my ears that the piano had a slightly larger soundstage in the 192kHz version but I wouldn’t be surprised if this was just an effect of pretty blue 192kHz LED lighting up on the Plus. Placebo or not, it sounded wonderful! Unfortunately the headphone amp was not quite powerful enough to drive headphones like the HifiMAN HE-6 and Audeze LCD-3, but this was not surprising as those have some pretty stiff requirements.

I switched the DacMagic Plus to fixed line-level output mode to do some listening in my home theater. Specifically, the 24/192 version of Norah Jones Not too Late sounded excellent. Her voice was clear and firmly planted in the center of the soundstage, never wavering back and forth or up and down. In an effort to expose my true levels of nerdism, I shall describe my experience when comparing the DacMagic Plus DACs to the Oppo BDP-95 DACs (dual ESS ES9018 chips) using a couple of my favorite film scores: How to Train your Dragon by John Powell and Conan the Barbarian by Basil Poledouris. Track 8, “Forbidden Friendship”, on HTTYD features a cast of mallet instruments that provide a great atmosphere to test the depth and width of a soundstage. The Oppo provided a warmer sound with more bass and midrange fullness along with a wider soundstage. On the DacMagic Plus, the soundstage was not as large, but it was more clear and concise. Instruments were planted in their own space, giving a more realistic presence. I found the DacMagic Plus to deliver great detail and crispness to the mallet instruments. Listening to Conan only furthered these findings. Again, the Oppo had a wider, more enveloping soundstage with a bit warmer midrange and increased low end presence, but the DacMagic Plus delivered a more concise soundstage where the strings and brass sounded especially clear and neutral. The low end response on the Plus was tight and quick, allowing upright bass performances in jazz ensembles to shine. They are both great performers and in the end it always comes down to personal preference.

Conclusions about the Cambridge Audio DacMagic Plus

The DacMagic Plus offers quite a lot of bang for the buck, including plenty of connectivity with a couple digital inputs, 24bit/192kHz high resolution USB 2.0 audio, and optional Bluetooth streaming, and it even has a solid headphone amp. The DACs inside provide a beautiful detailed sound along with a clear and concise soundstage that most would find hard to criticize. It would be a crime for me as a reviewer to not recommend the Cambridge DacMagic Plus as it is one of those products that performs above and beyond its expectations at its price level.