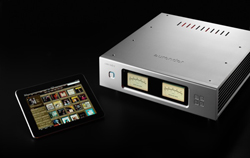 Hark ye back to the 2011 California Audio Show in the half-forsaken Burlingame something or other. As yours truly made his way betwixt and between the 46 or so exhibits, reporting on all for this website, I encountered major buzz about a new-to-the-U.S. company, Korea’s WideaLab, and its Aurender S10 “Music Playback and Storage Solution.” The company may not be consistent in its nomenclature – the website and company brochure also identify the Aurender as a “Reference Music Playback and Archiving System” and “Revolutionary New Music Player” – but the buzz was.

Five months later, Chris Connaker of computeraudiophile.com declared the S10 his Audiophile Product of the Year 2011. The S10 has also received an Editor’s Choice from Hi-Fi News.

I made it a point to spend considerable time in WideaLab’s two exhibit rooms. There I found myself charmed by company President Harry Lee, his wife, and two extremely intelligent and articulate children. I was equally impressed by the S10’s extremely attractive, easy-to-use remote iPad interface, and the unit’s solid build and feel.

Sonics, however, were more difficult to pin down. Although the company had two different displays, neither was ideal for listening or instant evaluation. Intrigued as to why some were calling the Aurender the finest sounding music server they had yet encountered, I determined to request a unit for audition and review.

Design and Setup of the WideaLab Aurender S10 Music Server

The Aurender S10 is a one-piece music server and HD storage system. Among its many features are Solid State Drive (SSD) playback; a customized computer, equipped with WideaLab’s proprietary sound card, that runs the Linux OS; clocking and re-clocking modules that use OCXO oscillators (oven controlled crystal oscillators); up to 2 terabytes of memory; easily upgradable software and firmware; and playback of WAV, FLAC, AIFF, Apple lossless, and other formats of music up to 24-bits, 192 kHz sampling rate.

The unit sports a very large AMOLED display that is switchable between two views. The view I used almost exclusively displayed information about the music being played. In the case of long titles that include composer and title, that information is constantly streamed in large characters that scroll from right to left, as if they were news headlines on the bottom of your TV screen. This view also shows information about bit depth and frequency, as well as file format.

The alternative view shows two side-by-side source level meters that display decibel levels for 24-bit audio and 16-bit playback. The two are sometimes differentiated by their blue and yellow backgrounds, although that doesn’t show in the photo. Trusting my ears to set sound levels, I didn’t make much use of these meters. 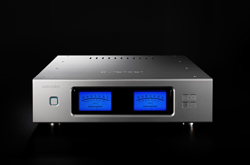 While the display’s readability from across the room is a major plus, I found the constantly moving light show for the long audio track titles typical of the classical music I play extremely distracting. Thankfully, the display can be turned off by iPad remote. That’s exactly what I did.

WideaLab claims that the unit’s OCXO oscillator is far superior to those used in other units, and results in greater accuracy and less jitter. Among the unit’s other touted attributes are fan-less operation, and the quiet and faster playback of its solid-state drive. During playback, once selections are cached in the SSD, the HD “falls asleep.” This, WideaLab claims, eliminates problems with sonic and electromagnetic noise from the spinning HD.

The S10’s switching mode power supply is isolated by a thick aluminum wall, with its linear power supply reserved for “critical” components and applications. To further lower noise, additional thick aluminum walls isolate the CPU and HD drive. All this makes basic good sense. It also makes for an extremely well thought out, solidly built unit that does not fail to impress. 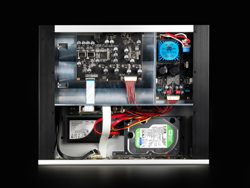 While the front of the server has four square buttons on the right side that control play/pause, forward, reverse, and display toggling, I basically relied on my iPad remote whenever possible. Cue up and play was extremely rapid, faster than it takes my PS Audio Perfect Wave Transport to load a CD.

In order to use an iPad as a wireless master remote control, the Aurender must be connected to a wireless router. For purposes of my review, WideaLab furnished both the router and iPad. I connected the S10 to my 24/192 capable Theta Gen. 8, Series III DAC/Preamp via its AES/EBU digital output. Care was taken to use the same astoundingly effective Magico QPod supports under both the Theta and the Aurender S10. Although I never availed myself of the S10’s online support guide, which I encountered after the fact, it is quite detailed.

The WideaLab Aurender S10 Music Storage and Playback Server In Use

My unit came pre-loaded with a ton of music, some of which was also in my CD collection. Again, I loved how attractive album art looked, and how easy it was to construct playlists. A simple touch of the finger cued music up, and playback began rapidly after hitting play.

WideaLab initially asked me to keep the Aurender S10 for only two weeks. For a reviewer who writes for well over a dozen publications, and is constantly juggling deadlines while making allowances for the spouse, this was most unreasonable.

Matters were further complicated by the fact that I had never before used an iPad, let alone an iPad/music server/wireless router/wired modem/computer interface. The default middle person who reluctantly ended up assisting me with all this – WideaLab does not have an 800 number for support, let alone an easy solution to the continental divide between the West Coast and Korea – detests guiding people through computer basics, and resorted to screaming over the phone like a certified madman. My mother has been dead 29 years; I do not need another, thank you.

I eventually got through the rough spots, but it was not pretty. The experience certainly contributed to short-term S10 approach/avoidance syndrome that required me to keep the unit a few weeks longer. 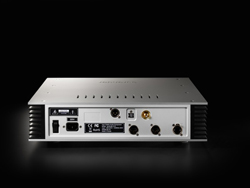 Once I got everything up and running, I made basic decisions about review procedure. Although it was extremely tempting to avail myself of the hundreds of titles that had been uploaded to the S10’s HD, including a lot of delicious jazz from the likes of Bill Evans, Betty Carter, Miles Davis, and other greats, I realized that the only way I could accurately evaluate sound quality was by working with titles familiar to me.

Hence I ignored the temptation of all those pretty album covers and luscious tracks, beautifully displayed on the iPad, and instead used my Macbook Pro to load some of my old standbys to the Aurender. These tracks included the first movement from Reference Recordings’ Rachmaninoff Symphonic Dances, both in 16/44.1 and 24/176.4 configurations; the first movement of Mahler’s Symphony No. 2, as conducted by Ivan Fischer; Handel sung by mezzo-soprano Lorraine Hunt Lieberson and Schubert sung by soprano Elly Ameling; and some luscious sax, bass, and percussion tracks from the latest release by jazz wizard Charles Lloyd.

The S10 does not have its own music ripping software; music must be added to its HD via a USB key, flash drive, or eternal computer. I wanted to add many more tracks from CDs I was in the process of reviewing, but I could not always get the computer HD/wireless router/iPad/S10 interface to work seamlessly. I’m sure, had some non-condemnatory support or a few more weeks been available, this would not have been a problem. Nonetheless, my experience confirmed the widely held opinion that, for those who can afford it (count me out), nothing beats a Meridian Sooloos for ease of operation.

Great care was used to insure that cabling and equipment supports were consistent throughout the process, that everything had adequate time to warm up between cable switches, and that power cables were isolated from one another. I also ensured, in the case of computer playback, that playback was quietest by operating from battery, and turning off my internet connection, Spotlight search, and widgets. In short, every piece of equipment was set-up and optimized for maximum sound quality.

I found the sound of my PS Audio PWT, especially after it went through a second set of Reference Audio Mods, different from but as satisfying as computer file playback using Amarra. That, I hasten to add, was before Amarra launched its 2.3 version upgrade, whose sound I love. Amarra 2.2’s tendency to slightly exaggerate lower midrange information and soften the top has been corrected in Amarra 2.3; it is definitely the most natural sounding Amarra release to date.

Sticking only to my three sources for file playback – the Macbook Pro/Amarra/Wavelength Wavelink interface, Aurender S10, and Auraliti L-1000 – I easily established a sonic hierarchy. The most satisfying sound, with the greatest color differentiation and three-dimensionality, came from the prototype Auraliti L-1000.

Finally came the Aurender S10. It was not that the S10 lacked musicality, or that, in the absence of other sources, it was anything less than extremely satisfying. But, for example, when I played the Mahler, I could not fail to detect a slightly gray background around instruments and between notes. As I switched to computer/Amarra playback, then to the L-1000, the noise floor dropped progressively, and instrumental colors emerged with greater vibrancy and saturation. It was as if I were watching the same Technicolor movie, first in a version that had been circulating a bit, then in a new print, and finally in a new print in a state-of-the-art theater.

The Aurender S10 is the only music server, other than various iterations of the long-in-development Auraliti L-1000, that I’ve had in my system. Given that the L-1000 is only a player, and relies on external storage, the S10 is also the only server I’ve used that includes an internal HD for file storage. I cannot help but wonder if the L-1000’s reliance on external file storage contributes to its superior sound.

For solidity of construction, appearance, and ease of operation, WideaLab’s Aurender S10 music storage and playback system rivals the best on the market. Short of the Meridian Sooloos, which can cost twice as much or more depending upon configuration, the S10 may very well be the most versatile, easy-to-use one-piece file server/storage device currently available.

Its sound is also excellent. Although I would hesitate to call it “state-of-the-art,” I am not sure that “state-of-the-art” music server file playback has yet been achieved. The medium is too new, and the latest innovations still being implemented. If for the moment I forego ease of operation, stick to computer playback using Amarra, constantly shuffle between various external HDs in a time-consuming search of files, and save my sheckels, do not hasten to recommend the S10 to anyone searching for an elegant, efficient, and easy-to-use file playback system that yields sound far better than most folks ever thought possible from a music server.