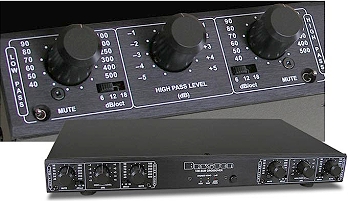 If you have a home theater system where your bass management isn’t as flexible as you would like it to be, an outboard crossover network could solve your problems. Bryston makes several models, and the one I chose to review was the 10B-SUB, which is designed for sending the low frequencies to the subwoofer and the mid/high frequencies to the power amplifiers that drive your left and right front channels. You can select the crossover frequency and the slope for both the low-pass and high-pass outputs. It is superbly constructed, extremely flexible, and its bench test results were first rate.

The Design of the Bryston 10B-SUB Active Stereo Crossover Network

By “Active” this means that the Bryston has powered (wall socket AC) electronics to perform the crossover, as compared to “Passive” crossover networks that are capacitors, resistors, and inductors inside speaker enclosures.

The 10B-SUB is active, and as you can see from the photo of the inside of the chassis, shown below, there are numerous components. There have to be, because of all the choices for crossover frequencies (low-pass choice is independent of high-pass choice) and slopes.

OK, so here was my problem. I have two full-range electrostatic speakers (ESLs) as the front left and right channels, along with two subwoofers that are connected to the left and right subwoofer outputs on my processor. Unfortunately, the slope for the bass management is only first order, i.e., 6 dB/octave.

With ESLs, even with full range models, deep frequencies, i.e., 30 Hz, will cause the membrane to touch the stators, causing a popping noise. So, pipe organ music, rock music, action movies, etc., cause a problem when I listen at loud levels.

I set the bass management in my processor at 60 Hz crossover (low-pass) to the subwoofer outputs, but the slope is not steep enough, and even with signals at 20 Hz, I could still hear a significant amount of sound coming from the ESLs. I ended up setting the low-pass frequency in the processor to 120 Hz to keep low frequencies out of the ESLs. Then, I ended up with too much upper bass coming from the subwoofers.

I put up with this problem for a long time, and then, one day, I remembered that Bryston makes active crossovers. So, I contacted James Tanner, told him what my problem was, and he shipped me the 10B-SUB, which is optimized for use with subwoofers.

I received the black version, but it also comes in silver, shown below, with a close-up of the left front panel.

You can see on the front panel in the photo above that there are three sets of control knobs on the left and on the right. The first one on the left controls the low-pass frequency, and there is a slider switch nearby to select the slope (6 dB, 12 dB, or 18 dB per octave). The second knob from the left is an attenuator for adjusting the output of the high-pass section, and the third knob selects the high-pass crossover frequency, with a slope selector underneath.

The rear panel has a left and right channel XLR input and two XLR outputs for each channel, one for the low-pass signal, and one each for the high-pass signal. A slider switch sets the crossover for functioning as 2 Way Stereo (the configuration I used), 3 Way Mono (this requires two 10B-SUB crossovers to tri-amplify two speakers, each with three drivers), and Mono Low Pass (for use with one subwoofer).

The Bryston 10B-SUB Active Stereo Crossover Network In Use

I set the 10B-SUB as a stereo two-way configuration (you can also configure it as two-way summed low pass, or a monaural three-way crossover, which could be used for tri-amping a speaker that has a tweeter, midrange, and woofer, but no crossover network inside the enclosure).

I set the attenuator to its straight up position, which is basically input = output.

I used the attack scene from Pearl Harbor to make my adjustments by ear, and ended up using a 60 Hz low-pass, 60 Hz high-pass, at 18 dB/octave.

The problem was solved completely. No more audible low frequencies in the ESLs below 60 Hz, and no more unwanted upper bass in either of the subwoofers. I also tried using different slopes and crossover frequencies (not necessarily the same for the low-pass as for the high-pass), but the final solution was the configuration mentioned above. Note, that you should also experiment with the slopes and the crossover frequencies for both the low-pass and high-pass, as it will affect the soundstage, and you will be delighted when that magic combination snaps into place.

I have a very high-end home theater system, and I was worried that putting the active crossover in the signal path, especially when I also use the front two channels for stereo music listening, so I ran some bench tests, with the results shown on the next page.

The Bryston 10B-SUB Active Stereo Crossover Network On the Bench

First, let’s take a look at the frequency response of the low-pass and high-pass outputs, with the crossover frequency set to 60 Hz, and with different slopes.

You can see why I did not hear any significant deep bass from the ESLs using 60 Hz high-pass, at 18 dB/octave. That is because, with the movie playing, any signal at 30 Hz (very likely in Pearl Harbor) was attenuated by 18 dB, which is a lot.

At $3,595, it will be a tough decision for a lot of people, but the difference was so huge in my case, the decision was easy. This is a very fine, very useful product, manufactured by a great company.