I am probably in the minority now. I am still a dinosaur that watches almost all of their movies off of physical discs instead of streaming, downloads, or Pay-Per-View. I do watch plenty of streaming content, as it is convenient, but I can’t bring myself to pay for an inferior quality product that I download compared to buying a disc at the store.

Now after spending a month with the Kaleidescape Cinema One Media Server, I can see a future, one that is very close, where I won’t buy a disc again. I see a reality where convenience and quality are not mutually exclusive. What does the Kaleidescape do that has managed to change my mind about this? A lot.

You might be familiar with the previous Kaleidescape products. They have always been sold and setup by custom installers where you have a central media rack. Typically it consists of a DVD/Blu-ray vault, a hard drive array, and then a client. All of your content resides in a central location and is then distributed over a network in the house.

The Cinema One is the first Kaleidescape product that is sold direct to consumers and contains that hard drive, Blu-ray drive, and client in a single box. Contained in the box is a 4 TB hard drive to store your Blu-ray movies, DVD movies, and music.  This will hold up to 100 Blu-ray quality movies, 600 DVD quality movies, 6500 CDs, or a combination of all of them. This is one of the many things that help to set the Cinema One apart.

This hard drive also enables the use of Kaleidesacpe’s newest feature: Their online movie store. Instead of buying a highly compressed film, you are buying a full resolution Blu-ray of the movie. You aren’t choosing between convenience or quality, but getting both.

Up front you won’t find the usual playback buttons on the Cinema One. All you’ll see are three buttons: Power, Eject, and Import. The first two are on every other Blu-ray player, but the Import button will import a disc to the hard drive once it is inserted into the player. Since copying a disc can take some time, being able to do it easily without turning your TV on is nice.

You’ll also find an Ethernet jack that you probably want to use. The Cinema One does work over Wi-Fi, but Wi-Fi is only so reliable. If you have multiple Cinema One units you can stream movies between them and doing so over anything but Ethernet is inviting problems.

Setup of the Cinema One is very quick and easy. The menu system is very easy to navigate, much like a hardware product from Apple or Sonos, and provides clear explanations. It also supports all the custom screen sizes you might see: 16×9, 2.35 with a sliding anamorphic lens, 2.35 with a fixed lens, and even 2.35 with a zoomed projector. As I use the last one in my theater it will automatically scale content larger than 2.35 to fit, though at the cost of resolution.

Once the Cinema One is connected to my display and home network, it is ready for use.

The most important feature of the Cinema One is the Kaleidescape store. The ability to purchase movies, in full Blu-ray quality, and download them is ground breaking. Much like HD Tracks has done with audio, being able to purchase and download the highest quality source material will start to put the final nails in physical media’s coffin.

Currently Kaleidescape has content available from Warner Brothers and Lionsgate. Future companies might come on but right now it is limited to them. New releases appear in the store the same day as release on Blu-ray and the prices are competitive.  Today the Blu-ray release of The Right Stuff came out and is $19.32 at Amazon. I purchased it from the Kaleidescape store for $18 and it instantly started to download to my machine.

The big worry for these downloads is how long they will take. I know that is a concern I have coming in. I have one of the lower speeds of Internet access from Comcast in my area but a full 45 GB film still downloads in two hours for me. I can start it before dinner and it is ready to go by the time I can sit down to watch something at night. No driving to the store or opening up a package. I just sit down and it is there.

Even better, films on the Kaleidescape are free of the annoying features of Blu-ray. No loading times. No forced trailers or piracy warnings. You hit Enter to play and less than 10 seconds later it is on your screen. Since it is off a hard drive seeking out chapters is instant and there is no layer change. You just enjoy the movie.

Enjoying movies is what Kaleidescape is all about. There is no streaming content here. No Facebook app or web browser to use. It is just your library of movies and music and a wonderful interface to access it.

Adding your existing movies to the Cinema One is easy. You insert a disc into the drive, hit the Import button, and it copies it to the hard drive. Music CDs take around 15 minutes, a DVD movie around 30-45 minutes, and close to 2 hours for a Blu-ray. Once imported it will load instantly and have all the information and cover art added to it. But there is a catch, and this is the main problem with the Cinema One.

The Blu-ray licensing association is very picky about copying movies. They really don’t want it to happen at all. So while you can copy your movies onto the Cinema One, you have to put the physical disc into the drive to watch it. You are playing it off the hard drive but you need the disc as their form of copy protection. Alternatively you can add one of the disc vaults to hold all of your Blu-ray discs in, but that costs an incredible $5,500. Not exactly cheap.

Another option is that you can upgrade supported Blu-ray discs to Digital Copies for $2. Or upgrade a DVD to a Blu-ray digital copy for $6. After you import it to your system you can purchase the upgrade in the store and then it downloads the digital copy for you. Yes, even though you already copied it over it has to download all 40+ GB again because it’s technically a different version. If you have 50 Blu-ray discs that are available in the store, you can upgrade all of those for $100. Certainly not free but much better than effectively spending $18 per disc to store it in the disc vault. 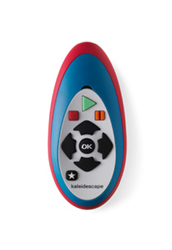 Even better, Kaleidescape offers a $40 kids remote that fits in their hand and has a minimal set of controls.  As soon as a button on the kids remote is pressed the Cinema One will only show titles you have approved. Combined with the Control4 system I have, I can set up a single button for my kids turn on the system and only allow them access to movies I want them to watch. Perfect for when they wake up at 5 AM and think it is time to get out of bed.

All of the familiar features of Kaleidescape are here. The cover art view that makes it easy to view your movies and select similar titles on your system. All of these have been around from the start and help make Kaleidescape what it is. Words don’t do a good job of conveying this so I’ve included a movie below to demonstrate it.

There are a few things I’d like Kaleidescape to improve upon with their system. I wish that the kid’s remote would use RF or Wi-Fi to communicate instead of IR. As people often hide the movie server in a closet it seems logical. I also would like the included remote to have better button layout. Most people probably use a system like Control4 with their Kaleidescape but the remote is only OK. Kaleidescape should also improve their iPhone app to allow for browsing of your library and movie selection. The iPad app does this but the iPhone one does not. An Android app would be nice as well. Overall the user experience of Kaleidescape is a wonderful one, as that is where the interface excels.

In all the years of reading reviews of Kaleidescape I don’t know that I ever saw one focus on bench test performance. It has always been about the usability and features of the system and not the raw performance. Well no one should really worry about it because the Cinema One performs very well on our Blu-ray bench tests.

The Cinema One was also a joy to use on the bench tests due to its speed. Chapters and Titles load up almost instantly instead of waiting for the disc to seek. Measuring loading times or layer changes was almost pointless, as the Cinema One doesn’t suffer from those. The previous record for loading The Dark Knight is 58 seconds but the Cinema One can manage it in fewer than 10. 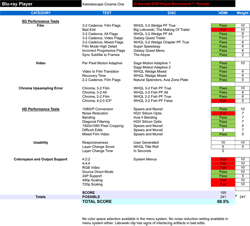 The Kaleidescape does fail one CUE test and the Bad Edits test but breezes through everything else. On our bench tests, the Kaleidescape is an excellent performer and one of the better Blu-ray players I’ve tested in a long while.

The Kaleidescape Cinema One feels like a bridge product, but a very important one. It works to straddle the lines between physical media and downloaded content. While it is very close to being almost ideal, there are a few things holding it back.

Having to store a disc in the drive wouldn’t be a big deal if every studio were in their store. I would just pay the $2 to upgrade all my titles to digital copies and have them available to watch. When I’m already paying $4,000 for a Blu-ray player, paying another $600 to copy all my movies on there is expensive but better than $5,500 for the vault. Being able to just buy a movie online during the day and have it appear later that day is a really nice feature to have as well.

If you buy a movie this way it is tied to your Cinema One. You can’t loan it to a friend and you can’t take it on vacation with you. You get an Ultraviolet copy of it, but you don’t get the physical disc to take with you. Because of this you can’t even take it to another room in your house, but if you have multiple Cinema One systems you won’t have that issue.

The movie store also should be accessible from the Cinema One unit. It isn’t hard to get to a PC to buy a movie, but being able to upgrade my existing Blu-ray titles directly should happen. I’m sure they would get a lot of impulse purchases as well.

You also have no integrated backup in the Cinema One. The more expensive Kaleidescape systems have RAID built in for redundancy but cost far more. The Cinema One uses a higher-grade hard drive than your standard PC does but it still can fail. It also can’t do 3D titles, which is a big failing. I don’t watch 3D myself but I think any Blu-ray player sold today should support it.

Despite these failings, I still fell in love with the Cinema One when using it. It makes watching movies easy and fun, and doesn’t get in the way. I can setup a custom collection of my favorite scenes I use to review displays and have that all play in order. No swapping discs, no seeking out scenes, just hit Enter and watch it go. It is an expensive product, but it is a wonderfully built and designed one.

If you love movies, and you can afford it, you should demo the Kaleidescape. You can’t help but be impressed and want to take one home.