Up NextTopping D10s USB DAC and USB to SPDIF Converter
I recently reviewed the PreSonus Eris E3.5s and had a stroke of luck a few weeks later when I stumbled upon a good deal on the larger Eris E4.5s.

In my constant search for the perfect powered desktop speakers, I got plenty of time to listen to both and write down some thoughts on each. These speakers make excellent desktop monitors for any use and are at attractive price points. Let’s jump right into the comparisons and see which one is right for you.

Getting the boxes in from Amazon, the speakers felt a bit lighter than I had expected. Included were all the cables needed to hook them up to my desktop system. The cables were not as nice as what came with the pair of Kanto YU4s I had recently tested, but they worked fine. I really liked the size of these speakers as my desk space is limited, but not tight. The E4.5s were a size bigger though, so I had to move a few things around to get the placement just right. On both models, the tweeters have a nice fixed metal guard to prevent damage and the woofers are exposed. I liked the placement of the power switch on the front, it’s bold and easy to spot on both models. The small blue LED light shows the status just above the volume knob. The volume knob is accurate and smooth; I wish it were a bit more pronounced, but it is still far better than most other speakers I have tested. As you can see below, the E4.5s are twice the weight and add size over the E3.5s. Make sure to measure out where you will put them to ensure they will fit. 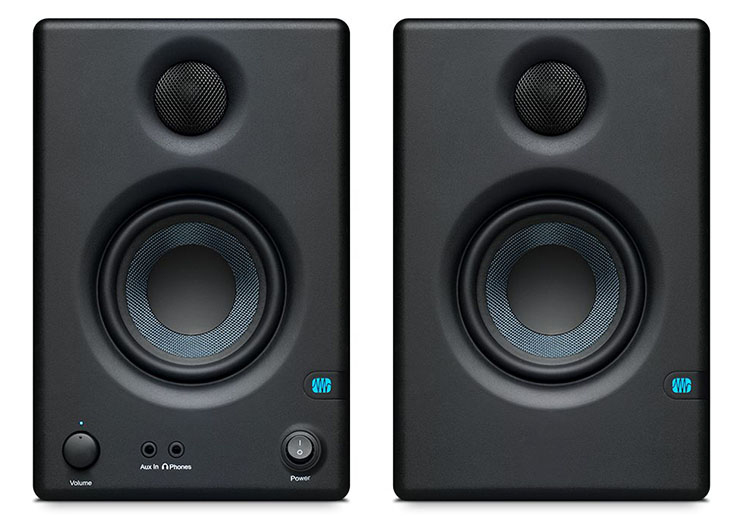 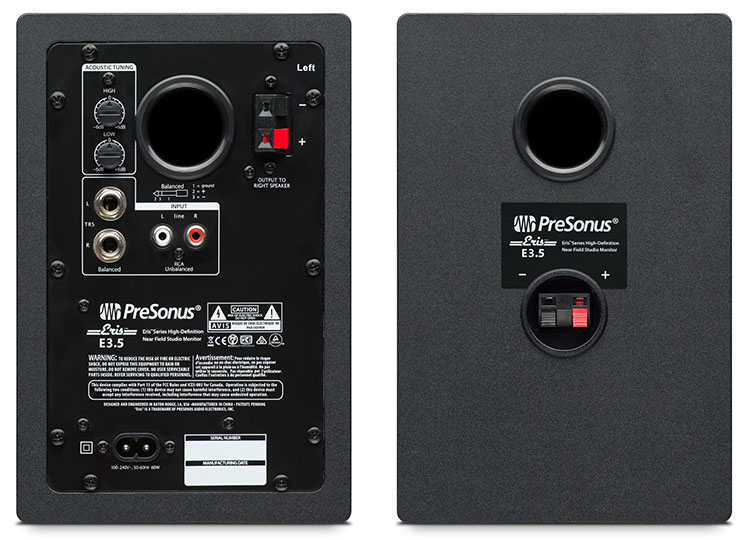 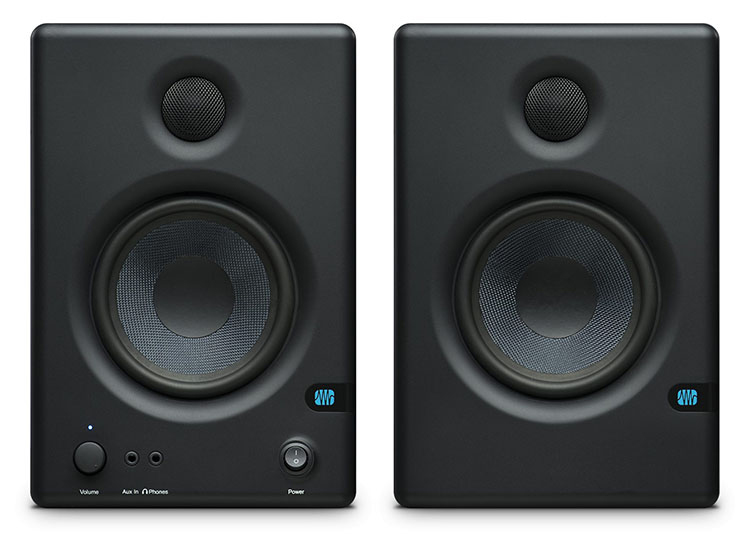 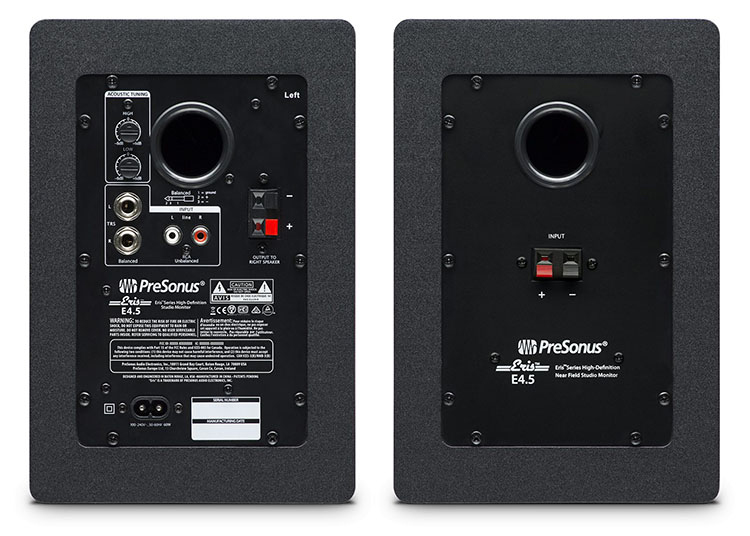 This is what truly matters in a speaker comparison, the sound. After getting them installed, I popped in some music and just started listening. I took full advantage of the acoustic tuning knobs on the back and left the highs the same for the most part but increased the lows ever so slightly. I used roughly the same settings for both models, with a slightly lower bass setting for the larger E4.5s. What these speakers can do is nothing short of a miracle. They really blew my expectations out of the water; highs were crisp and clean but in no way fatiguing. Lows were the most impressive, as they had such a presence that speakers with larger woofers could not match. The mids were also very well balanced through the spectrum. Highs and mids were nearly the same on both models, but the bass was far more pronounced from the E4.5s.

One of the most difficult things for near-field monitors to do is to produce a large sound stage over their short distance to the listener. The Eris E3.5s had no trouble doing this and even created the illusion of greater height. Though they are just under nine inches tall, they feel two or three feet tall in presence. At this price point, I was not expecting a big sound stage from such compact speakers. The larger E4.5s were equally capable, but I had to move them about four inches farther away to get them to produce the same soundstage.

The speakers didn’t miss a beat no matter what the volume. Playing them loud, the E3.5s remained unchanged with the only bass becoming the weak spot. This however was not the case with the E4.5s; their extra bass really shined at louder volumes. They become almost acoustically invisible during extended listening sessions. I tried out a wide variety of music and media to see if I could find any cracks in the audio quality. But there were none to be found. I am curious with even more break-in time how these speakers will sound. Looking over the spec sheets and confirming with PreSonus, the only physical difference between the two speakers is that the E3.5 has a 3.5” woofer versus the E4.5’s 4.5” woofer. As such, the E4.5 plays down to 70Hz instead of 80Hz.

I don’t feel my search for the perfect desktop speaker is over, but the PreSonus Eris E3.5 and E4.5 make a compelling argument. Both speakers are marvelous, and for the price, the E3.5s can’t be beat. But if you have space and want to go bigger, the E4.5s are well worth the money. I am very happy I upgraded to them and I can’t see myself shopping for new speakers any time soon. They have a great design and offer just the right amount of adjustments and options to sound spot on. If you’re looking for your next desktop powered speakers, don’t let the steal of a price fool you, these are serious speakers with an excellent punch. Both models are fantastic, but if you want the best, get the E4.5s, you won’t be disappointed.