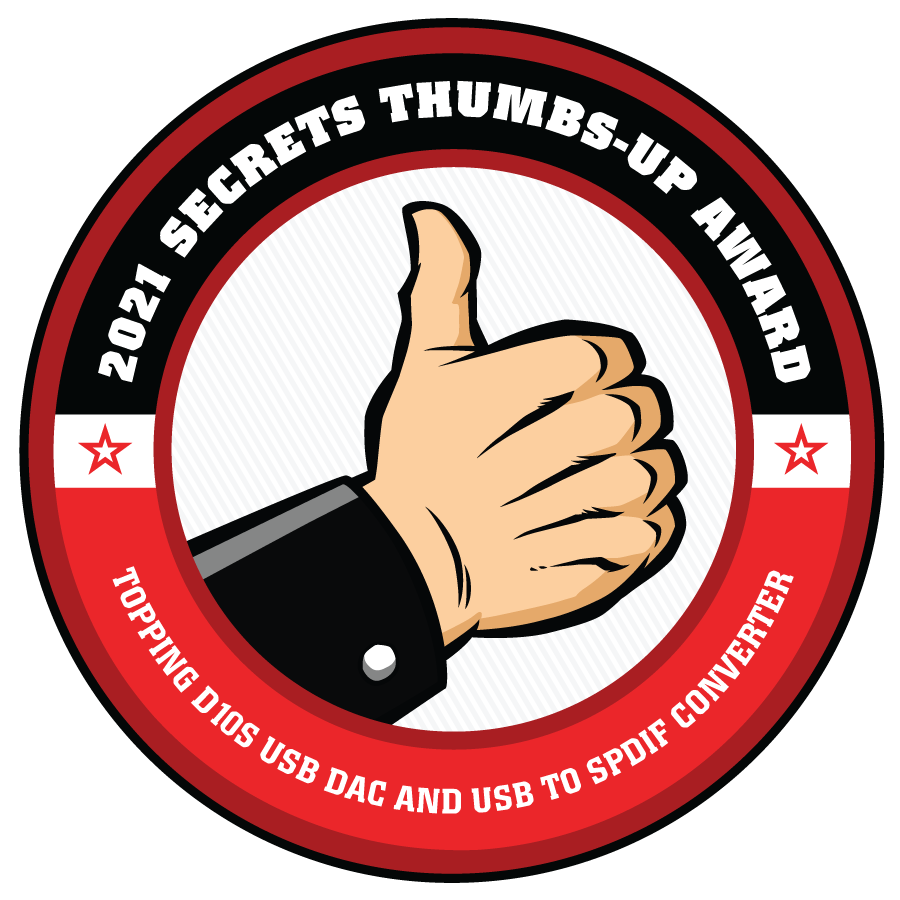 The Topping D10s USB DAC and USB to SPDIF converter has to be the handiest little $100 DAC in the land!

About a year ago our Technical Editor and “Objectivist Impresario” David Rich did an extensive examination of the Topping D10 USB DAC and USB to SPIDIF converter. He found it to be an incredible value for the measured performance that it offered. Secrets even recognized it with a “Thumbs-Up” Award for the extreme value that it provided. Topping has since updated the unit with a new DAC chip and dubbed it the D10s. While the retail price has gone up an additional $20.00 over the original, Topping claims they have achieved improved measured performance in the new D10s. So, let’s put those claims to the test in this quasi-addendum to David’s original review. 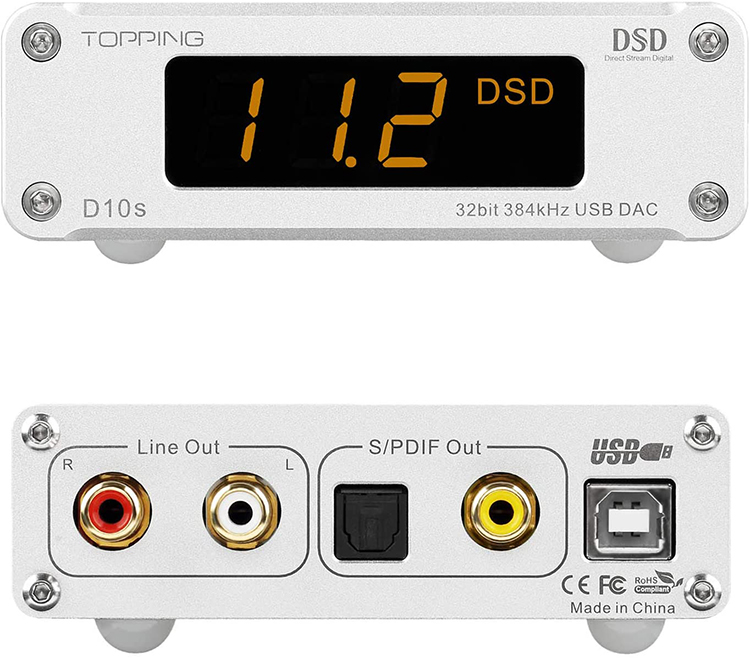 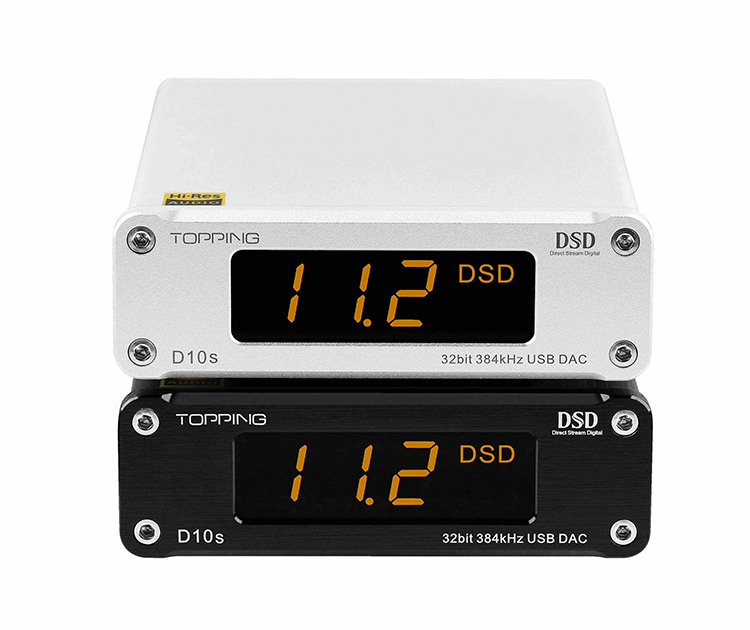 Externally, the Topping D10s looks identical to the unit it replaces. Same dimensions and same inputs and outputs. The only noticeable alteration is in the color of the LED display which has been changed from red to orange. The big changes have been made internally, primarily in the DAC chipset, switching the old ESS ES9018K2M out for the new ESS ES9038Q2M chip. These chips (with the K2M and Q2M suffixes) are both the low-power 2-channel versions of the big 8-channel “PRO” chips of the same numbering. These low-energy chips also allow the D10s to be USB-powered only. No wall wart required. This also means that the product is confined to just having single-ended RCA analog outputs. Not enough juice for XLR and, for the asking price, you shouldn’t expect them anyhow. I went ahead and measured a solid 2VRMS output coming from said jacks with a 1kHz, 0 dBFS test signal applied at the USB input. Plenty of output for any standard RCA hookup. 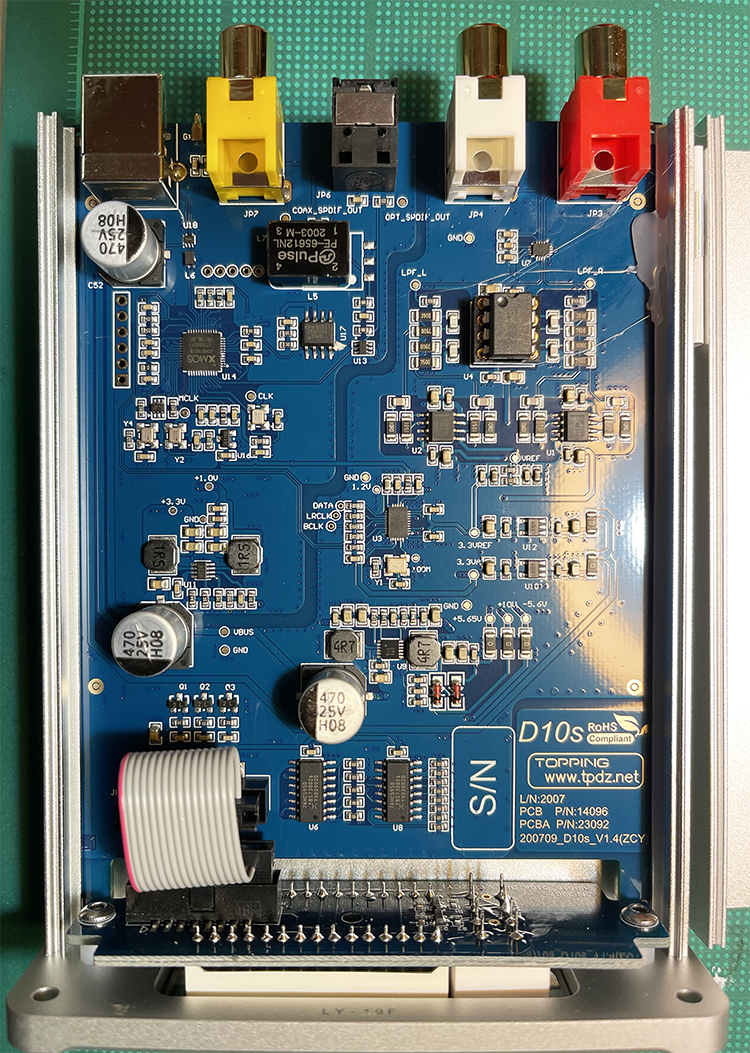 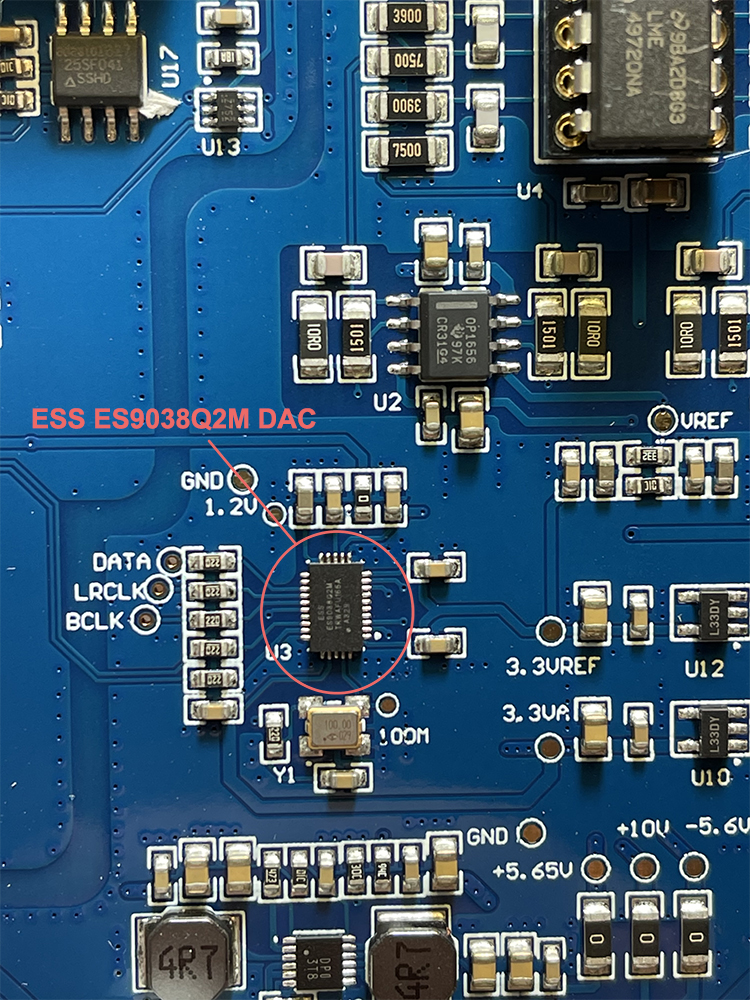 The singular input and limited outputs of the Topping D10s might beg the question of who exactly is this little box for? Well, if you happen to have a laptop or tablet that is chock full of music files or is connected to your streaming services, attach it to the D10s via USB and now you can connect it all to your hi-fi system by analog RCA jacks or either coax or optical SPDIF jacks if you have digital connections available. This is especially appealing if you have a simple or modest system with an integrated amp (or the like) at the center. And compared to the digital and analog guts that are typically found in most laptops today, the little D10s gives you a serious audio upgrade for $110 bucks. If Topping’s specs are to be believed, your laptop with this little box attached will give you a digital front end that will outclass a lot of significantly more expensive hardware out there. And, for that extra little bit of audiophile cred, you can run your laptop and the D10s completely on the laptop’s batteries, no mains power. Some folks are actually into that sort of thing. I even used the Topping D10s to bridge my DIY Raspberry Pi ROON endpoint to a pair of active speakers I had in for review and also to my regular Benchmark HPA4 preamp.

I went ahead and ran some bench tests to see how it compared objectively to the original D10 that David reviewed. I used my Microsoft Surface 3 PRO tablet with J. River Media Center 27 playback software as the source and running a custom series of digital test tones. Connection to the D10s was obviously via USB and J. River was using the downloadable Topping ASIO drivers to complete the audio chain. Output from the D10s was sent to my Lynx 2B sound card and analyzed using SpectraPlus audio measurement software. I should note that I reran several of these tests with the Topping WASAPI audio driver as well and noticed no discernable difference in the results. 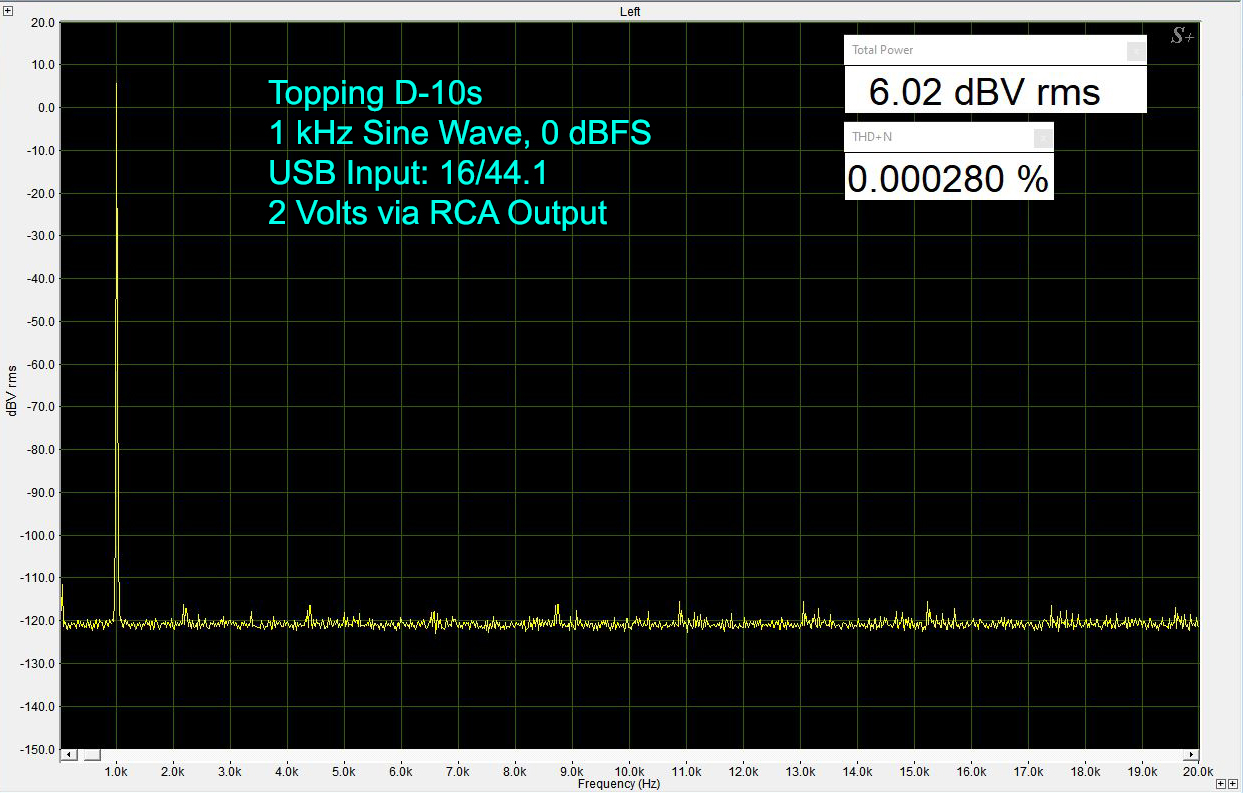 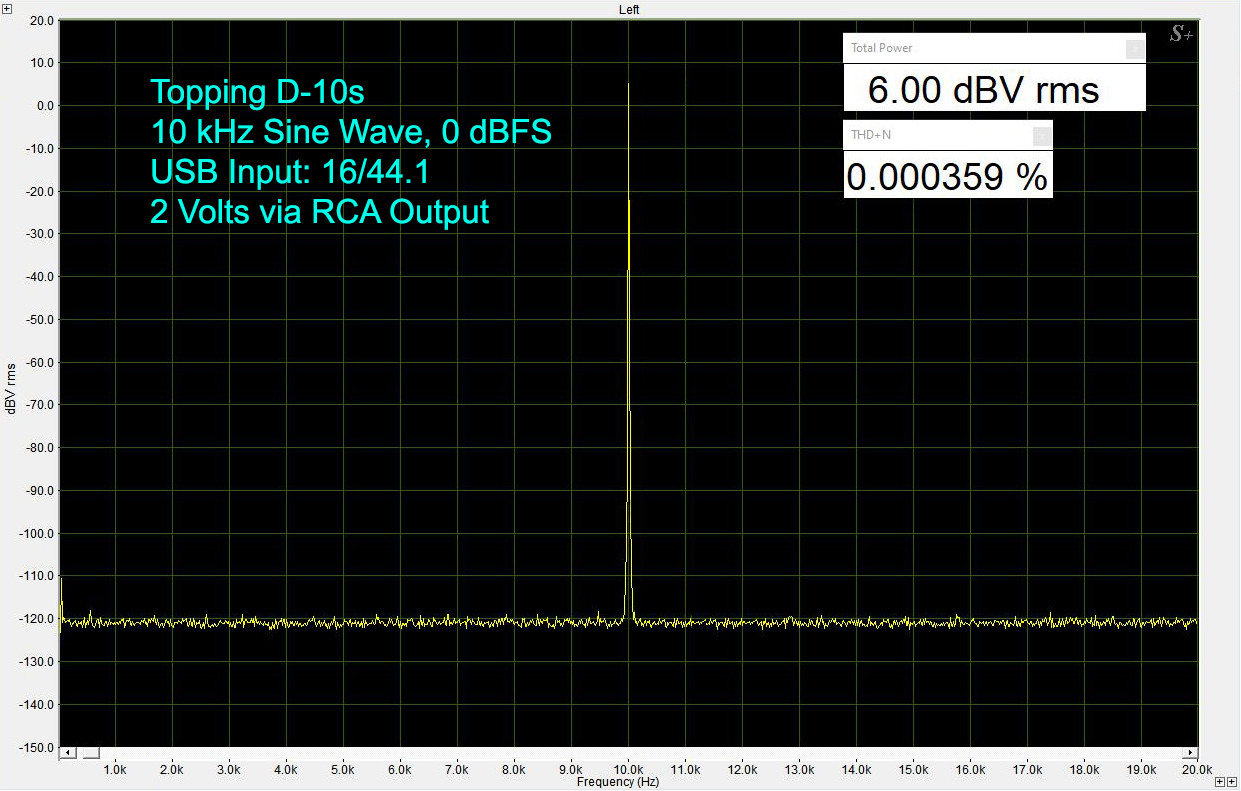 Using a 10 kHz tone of the same bit length and sampling frequency gives us an equally spotless result with a THD+N of 0.00036%. 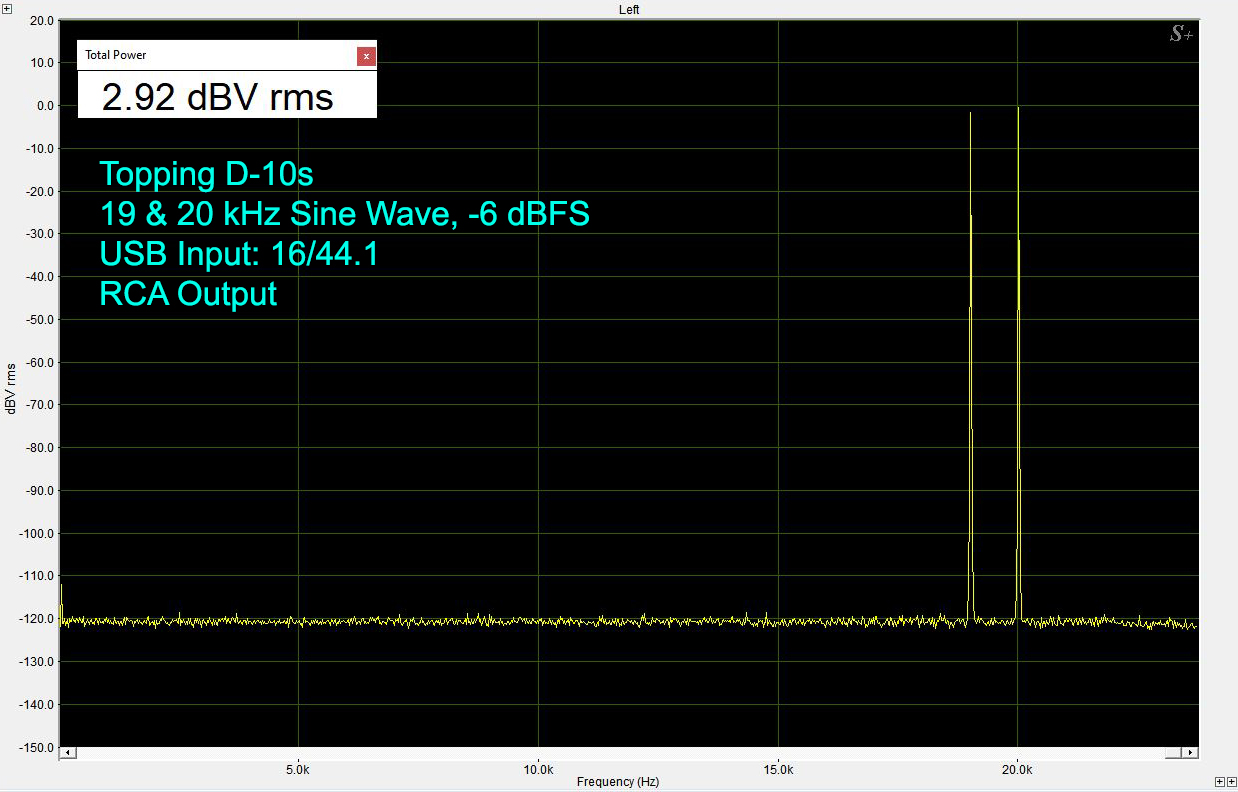 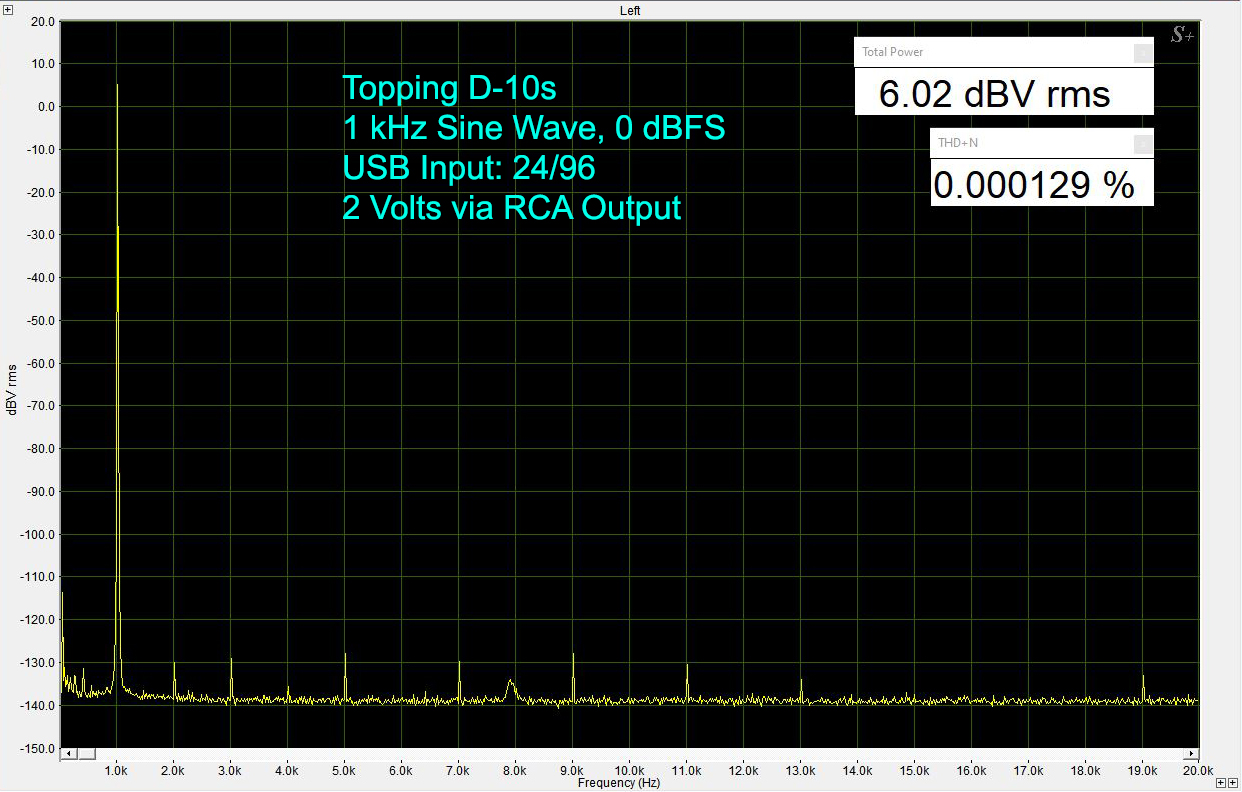 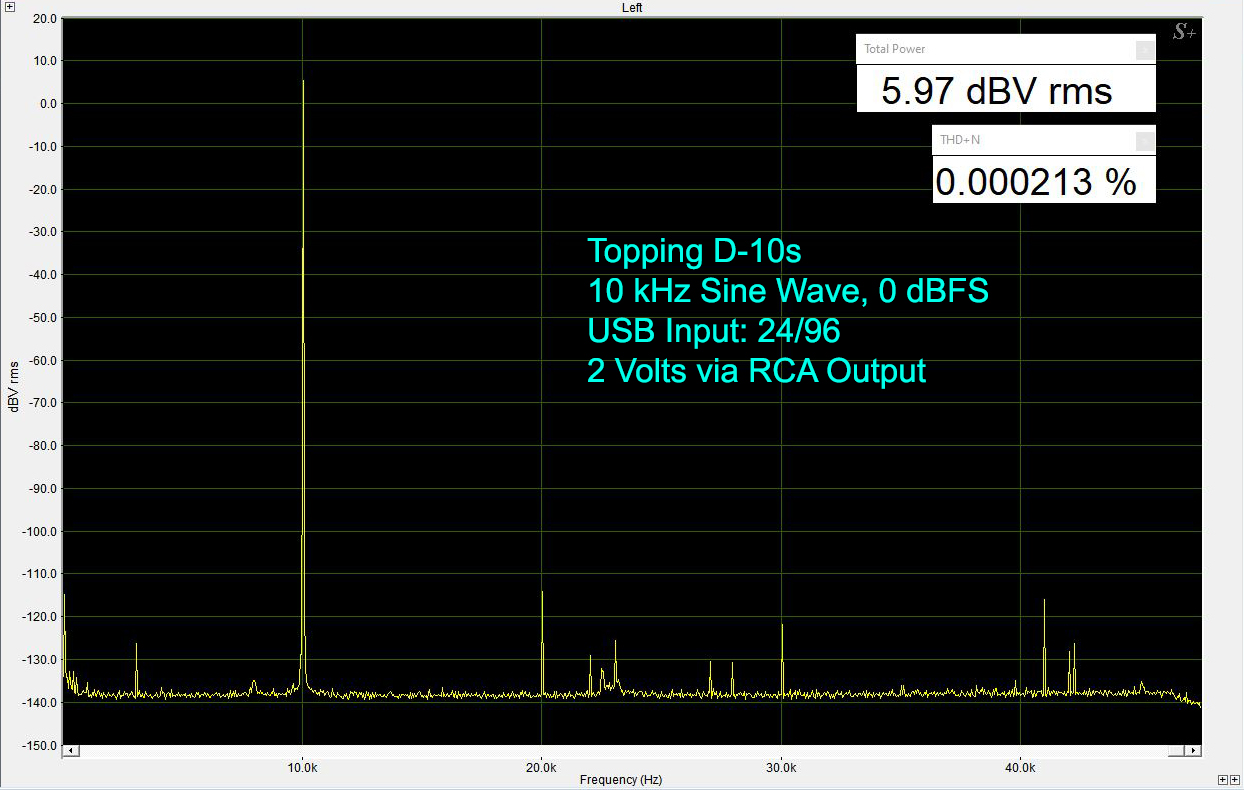 A 10 kHz tone of the same bit depth, sampling, and output level shows a THD+N of just over 0.0002%. The second-order harmonic checks in at 120 dB below the fundamental, with the third-order harmonic coming in at 112.8 dB below. 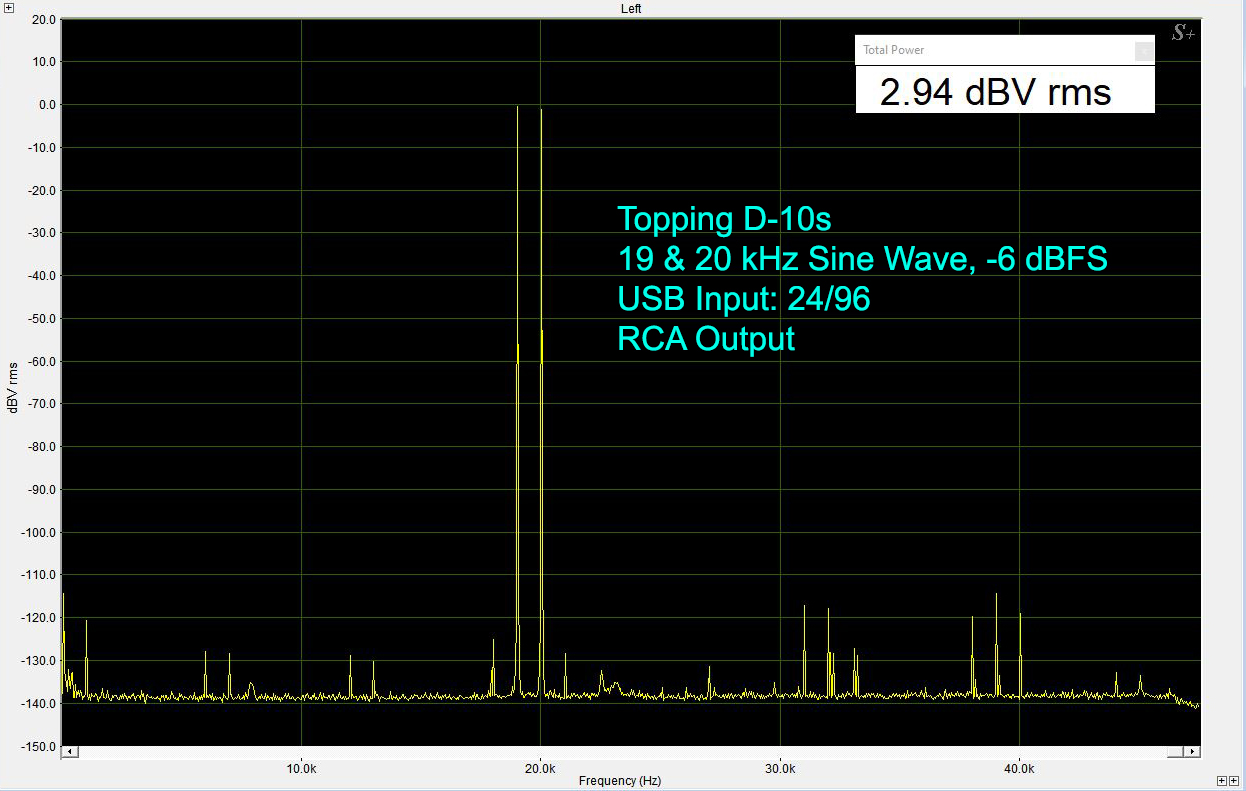 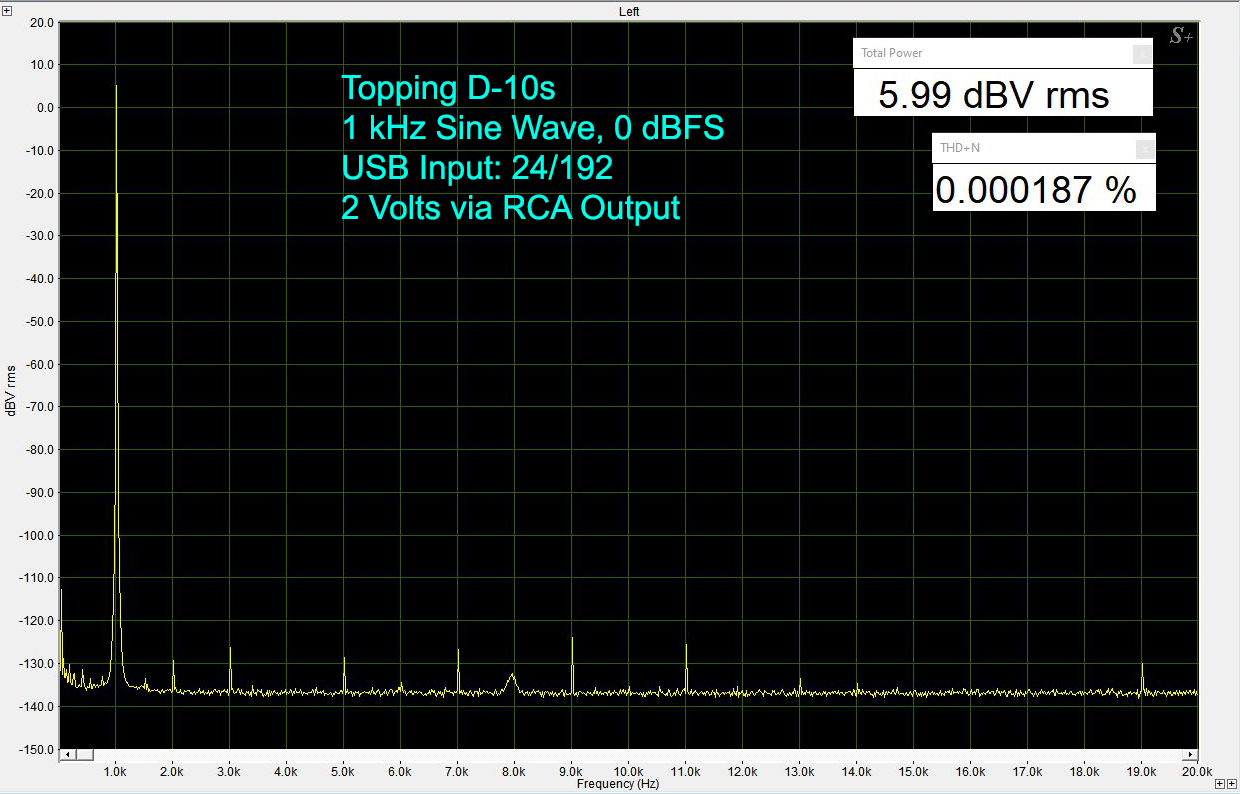 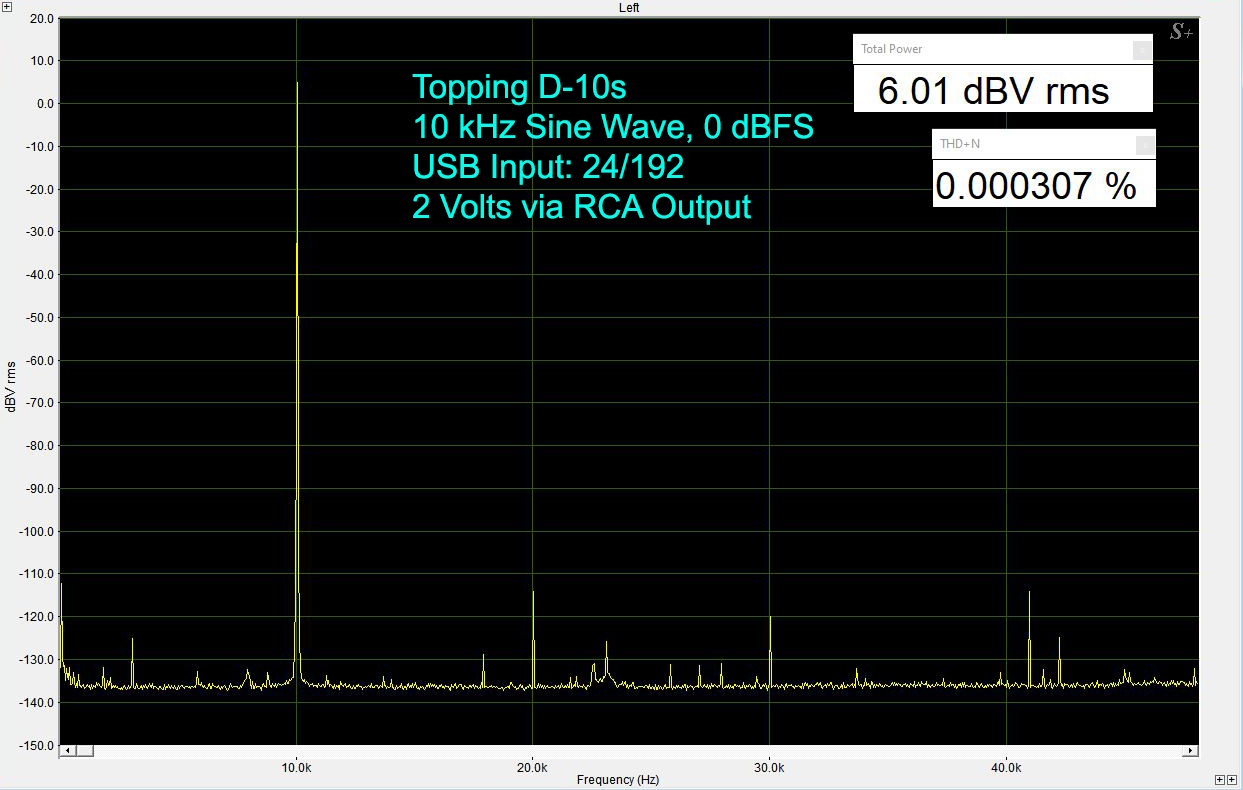 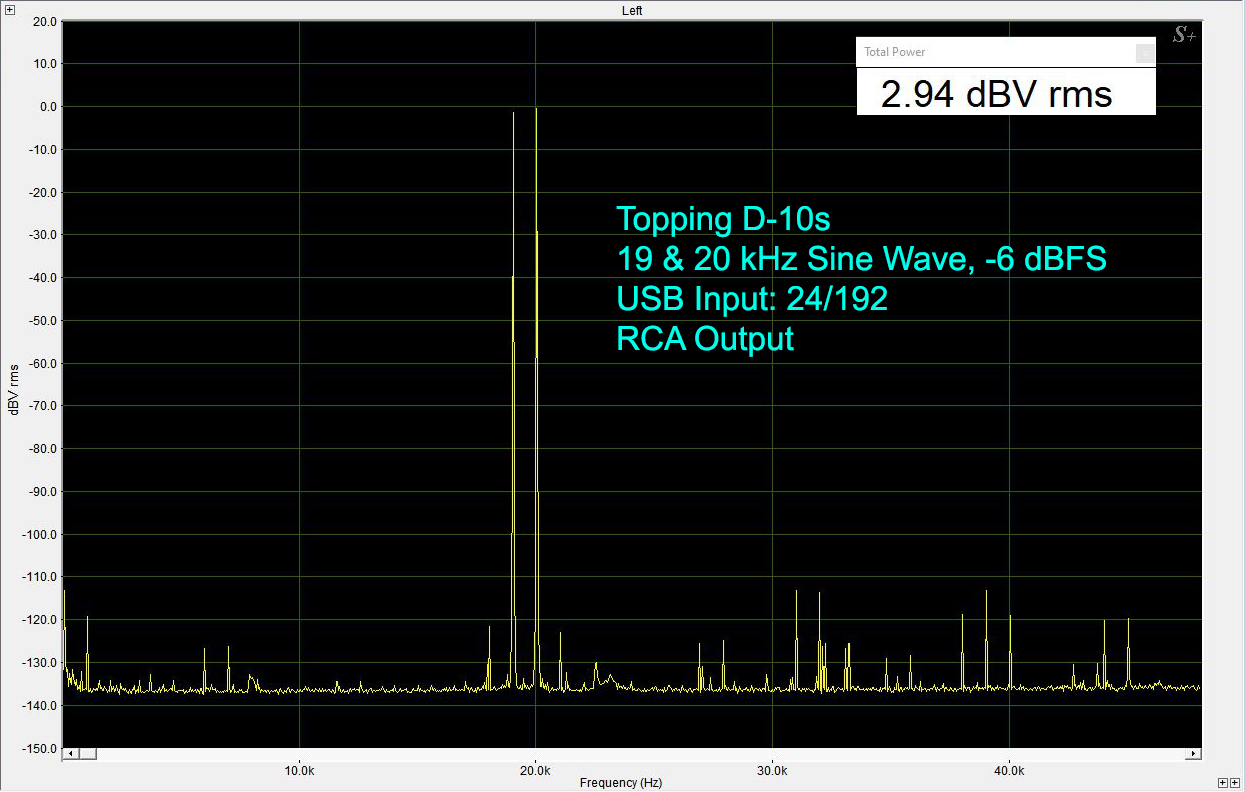 Above are the same three series of tests but done at 24-bit/192 kHz. The results for them are almost the same as the 24-bit/96 kHz tests. 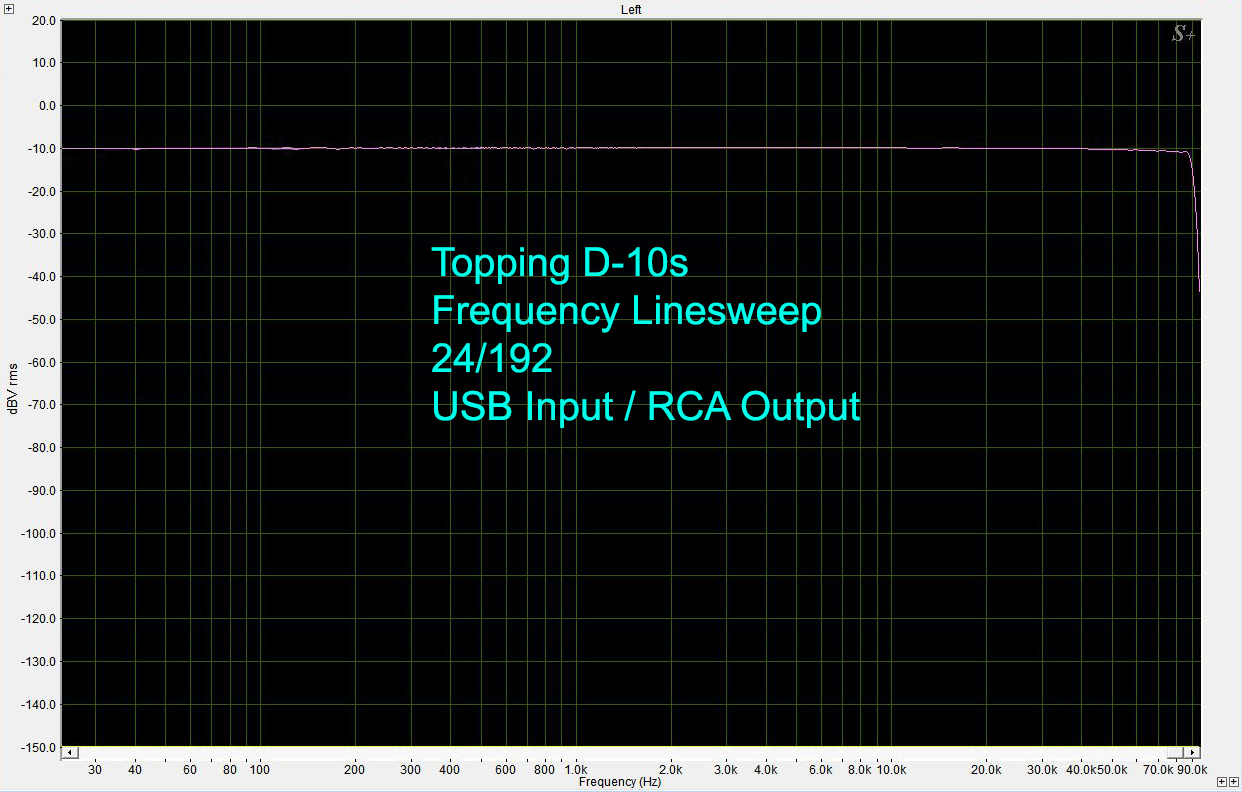 Here are the results for a frequency line sweep performed at 24-bit/192 kHz. The frequency response of the Topping D10s is flat out to about 85 kHz before it begins to steeply roll off. 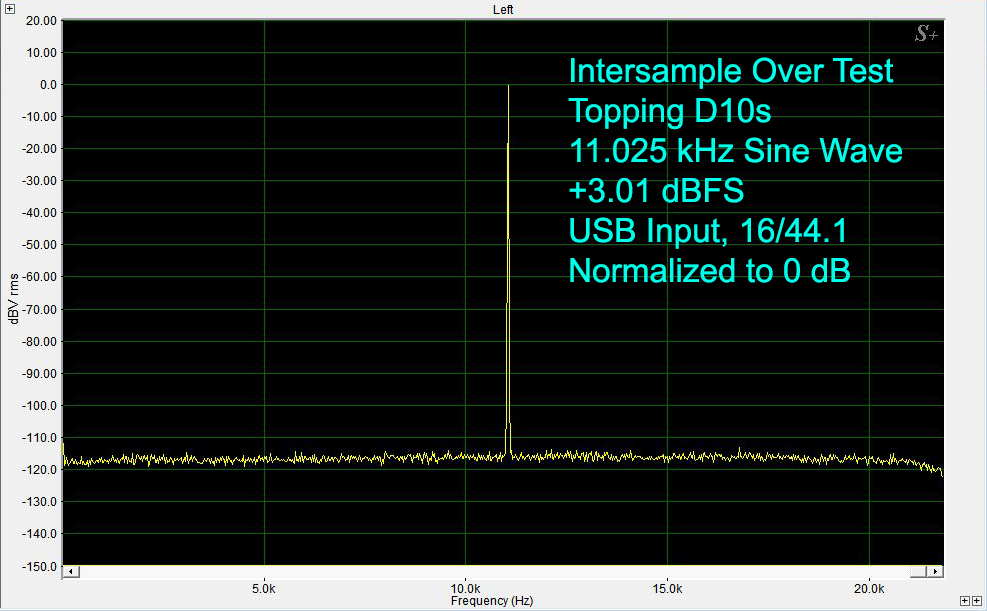 The Intersample Over test, inspired by John Siau at Benchmark Media Systems. It consists of using an 11.025 kHz tone with +3.01 dB signal peaks occurring at a phase angle of 45-degrees from the sample clock. This puts the maximum waveform peaks (higher than 0 dB) between the digital samples. According to Siau, “If audio peaks always fell exactly on a sample, there would not be an intersample overload problem. Obviously, musical peaks rarely fall exactly on a sample and most often fall somewhere between samples. This means that most recordings will have peaks that are over 0 dBFS if the highest sample values are just reaching 0 dBFS.” This condition is more prevalent in 16-bit/44 kHz CD recordings and lower bitrate, lossy formats like MP3, and can produce DSP overload problems in DACs. A poor performing DAC would show several spurious tones with some possibly being audible during regular playback. The test results for the Topping D10s show no spurious tones or distortion created by the test signal. 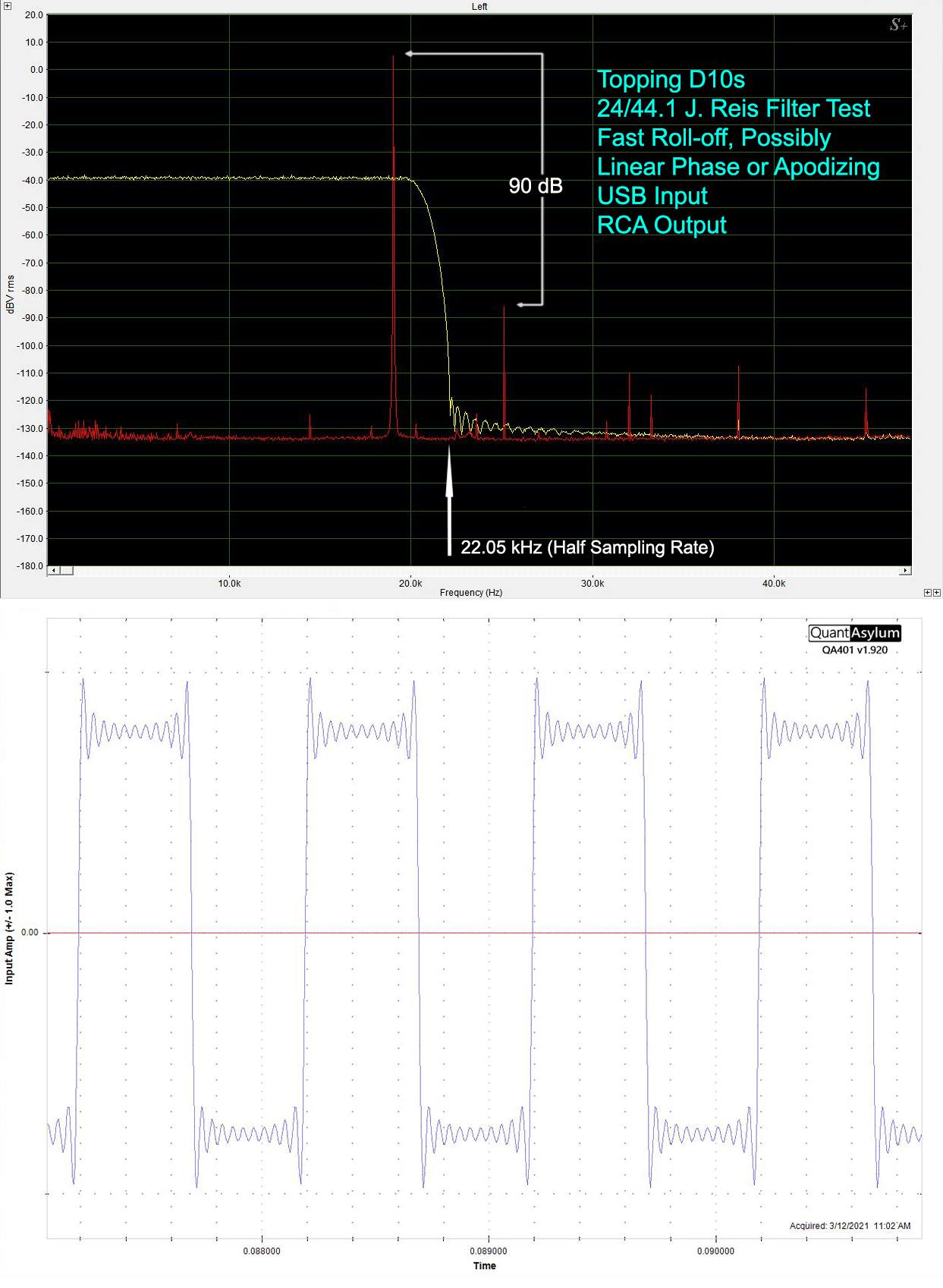 The following digital filter test, first suggested by Jurgen Reis of MBL Germany and used by John Atkinson of Stereophile, is designed to give us a look at the type and performance of the digital filter that a given DAC uses. Unique to John Atkinson’s presentation is applying the Reis white noise only in the left channel. In the right channel is a 19 kHz tone. This tone will produce reconstruction spurs if the digital filter is not sharp enough to attenuate them. I’ve also combined the test results with the corresponding square wave that the filter would generate, for comparison. The results show that the single available filter is a fast roll-off type. Not sure if Topping settled on a Linear Phase or Apodizing filter here. The plot shows that we get the first reconstruction tone down -90 dB (red trace). The passband is nice and flat past 20 kHz and then the transition band falls like a brick. The stopband looks to be a consistent 94 dB. An excellent result for a $110.00 DAC. 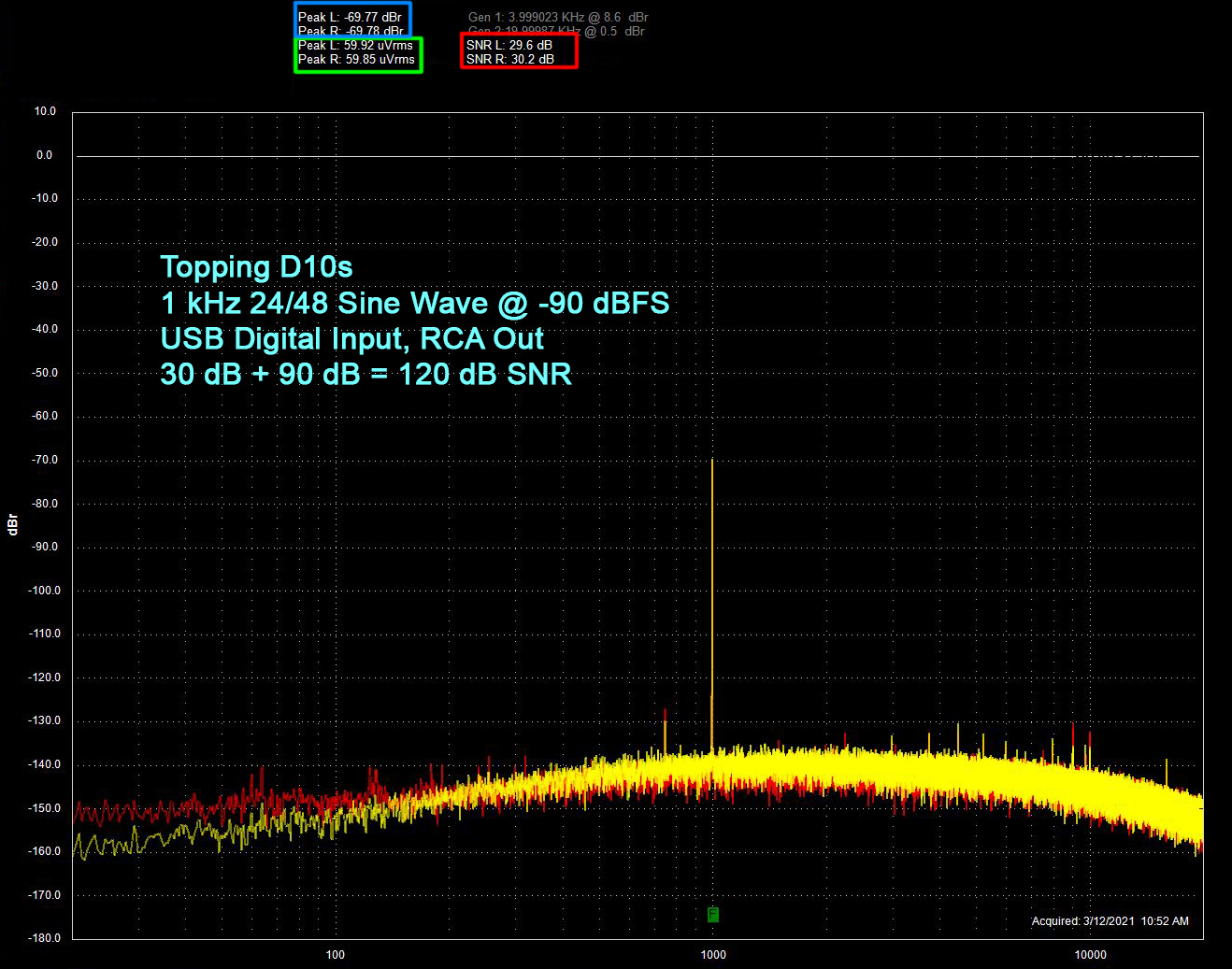 SNR measurements were done using the QuantAsylum QA401 Analyzer. Using a -90 dB 1 kHz test signal, we determined the digital SNR (A-Weighted) of the Topping D10s to be 120 dB. Converted to bits that means the D10s can resolve 20-bits. On the top of the spectrum, you see the SNR of the D10s and then see the signal to noise of the left and right channels relative to the -90 dB tone (red box). We want the ratio of the full-scale signal to the noise, so we add 90 dB. 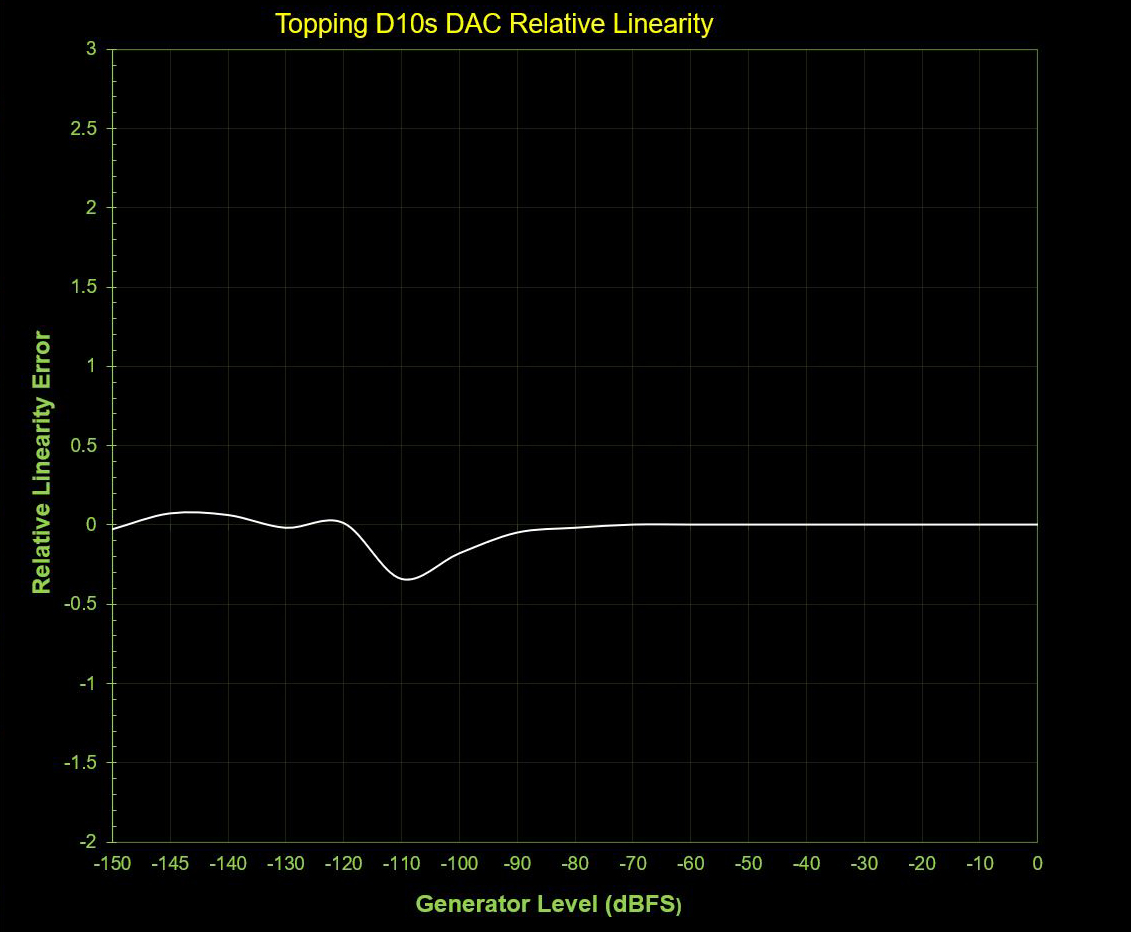 The above graph shows the relative line linearity performance of the Topping D10s. The ESS ES9038Q2M DAC architecture shows minimal amounts of deviation beginning at -90 dBFS in level. The largest deviation (-0.35 dB) occurs at -110 dBFS, after which the inconsistencies return to being much smaller. A very good result for a mobile DAC chip running on USB power. 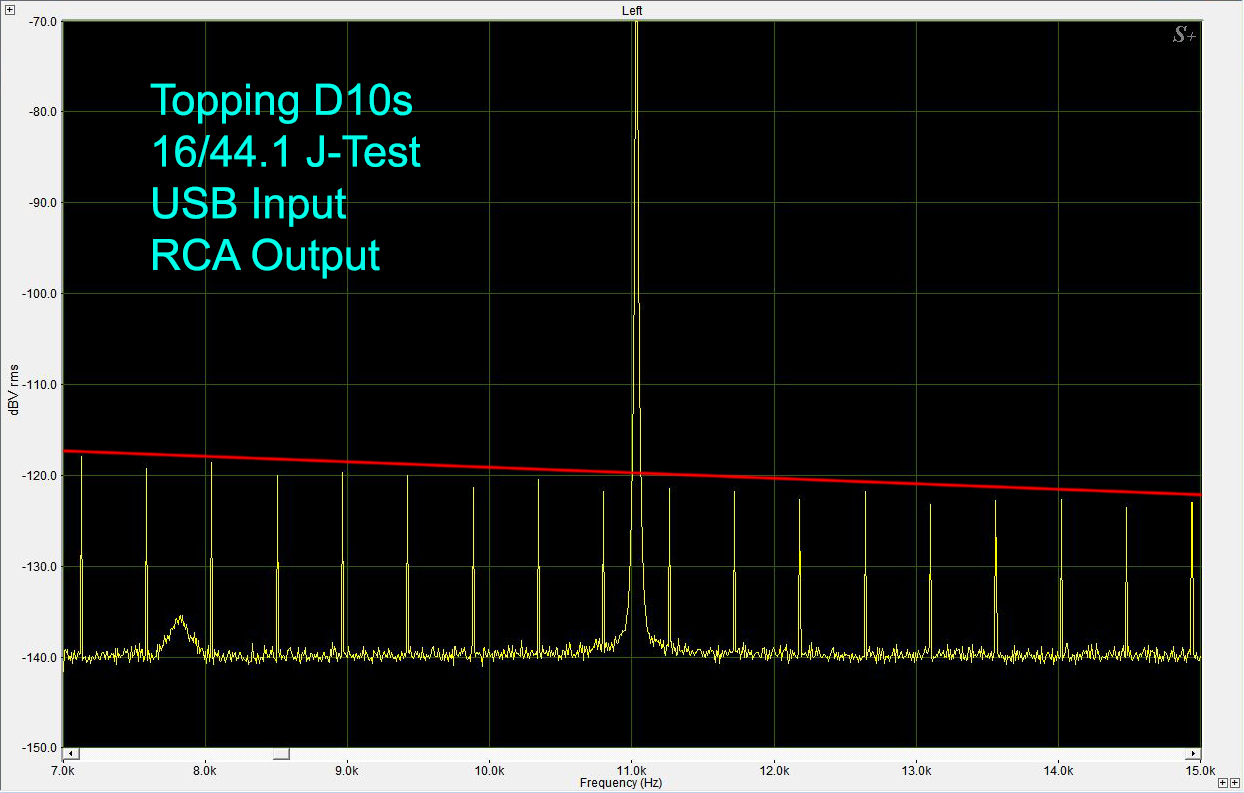 The final spectrum is the Julian Dunn J-Test for jitter at a sampling rate of 44.1k samples/sec.
The test is close to an 11 kHz tone at –3 dBFS down and is a small, low-frequency square wave that creates activity in the PCM data which makes it harder for the clock recovery circuit to produce a clock without some phase noise. I used a 16-bit test generated by REW introducing the square wave at an amplitude of the smallest level possible for 16-bit data which is called the least significant bit. An excellent explanation of the J-Test and the spurs the test produces can be found here.

John Atkinson identifies the spur’s amplitude and frequency of the J-Test in absence of jitter. John then comes up with an innovative line to be placed on a spectrum of the analog output of a DAC box which is reproducing the J-Test. Any spur below the line is inherent in the test and not from the DAC box.

As can be seen, the jitter of the Topping D10s is below the limits of the test. The small residual spurs between the lines are small enough that we cannot tell if it is jitter from the D10s or the ADC we use to translate the signal back to digital to produce the spectrum.

So, the measurements show that the D10s surpasses the original D10 in many respects, but how does the D10s sound? 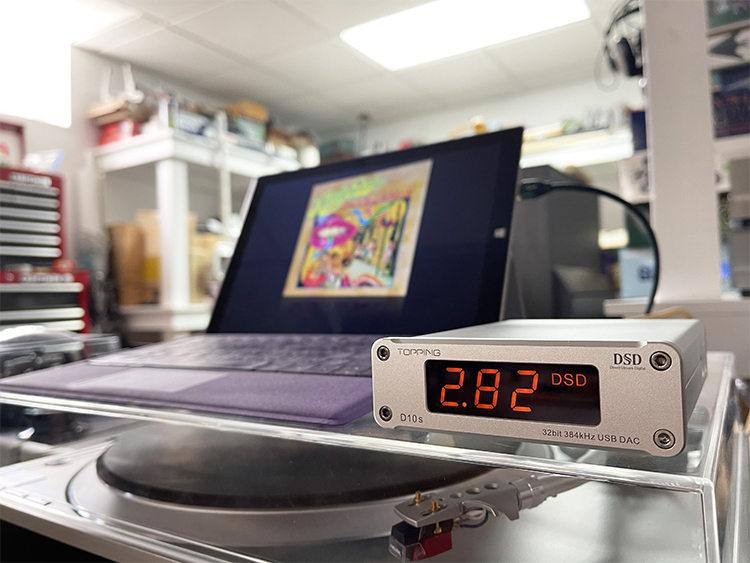 With my Surface tablet or my DIY endpoint playing files through it, the sound was clean, clean, and clean. A completely spotless and neutral presentation whether I used the analog RCA or digital outputs. The results compare very favorably with some more expensive SACD and CD players that I’ve had in my system over the years. For playback software, I either used ROON or J. River Media center along with the ASIO windows drivers downloaded from the Topping website.

So, to make a long story short, Topping has successfully updated and improved on a very handy and targeted little DAC box. The Topping D10s is an improvement over the original D10 in every way. Needless to say, if you have money to burn, you have lots of other options for digital solutions. But if you are of more modest means and aspirations, spending $110.00 on the D10s to bridge a computer playback system to your stereo is a really great way to go. You’ll end up with a digital front end that sounds way more expensive than it has any right to, and you can put the money you saved away to save up for other audio upgrades down the road. Enthusiastically recommended!

A Word from Technical Editor David A. Rich: Your next question is “What low-priced integrated amp can I use to get anywhere near this DACs performance?” Most of you will already have electronics that you are updating to accept a USB input with the Topping D10s, but what do you get if you are just starting out? Much of what I used to recommend as a starter system with phono analog and a tape monitor, such as the sub $200 RX-4109 Sherwood, are long gone. Among the current slim pickings available, I am going with the Yamaha A-S301 integrated amplifier at $350 which looks way better than the old Sherwood. The Yamaha’s preamp section uses an AVR LSI which is all you get at this price point. The textbook design power amp puts out 60 Watts into 8 Ohms at 0.02% distortion 20Hz -20kHz. Not much current drive with the A-S301 but it should be more than happy to drive most good floor standers in the $1500 price range such as the PSB Imagine X2T. Despite all the analog-looking controls, including the tone controls, it’s all just for show with the microprocessor in control of everything involved in making selections.