Up NextFIBBR Pure 2 Fiber Optic HDMI Cable Review
MartinLogan recently invited some audio journalists to attend one of a series of events to promote the unveiling of their updated Motion line of loudspeakers.

The event I attended was hosted by independent A/V dealer Georgia Home Theater located in Marietta, Georgia. So, as I found the prospect interesting and I really had never had a chance to hear the previous Motion speakers before, I hopped on a plane and schlepped down to Georgia to see and hear what the deal was on this.

I’m based out of Columbus Ohio and the hour-long flight was an easy one to make but I had forgotten how huge Hartfield-Jackson International Airport in Atlanta was. That and after chatting a little with a fellow reviewer who made the trek in from my old hometown, Toronto, it made me extra glad for the smaller, more approachable size of Columbus’ John-Glenn airport. 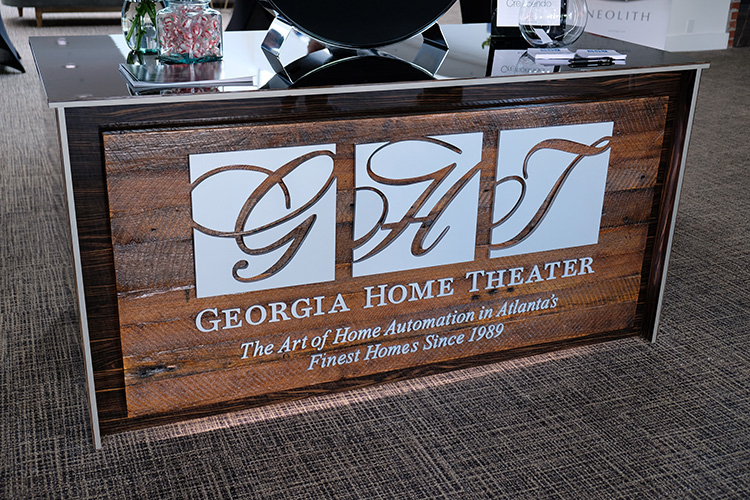 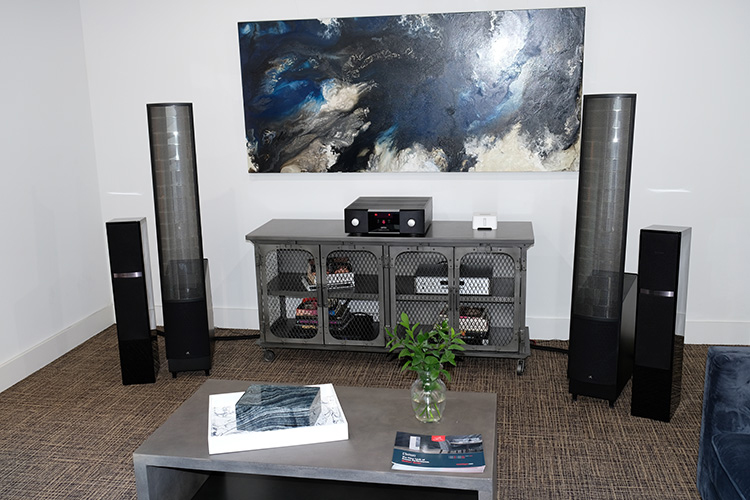 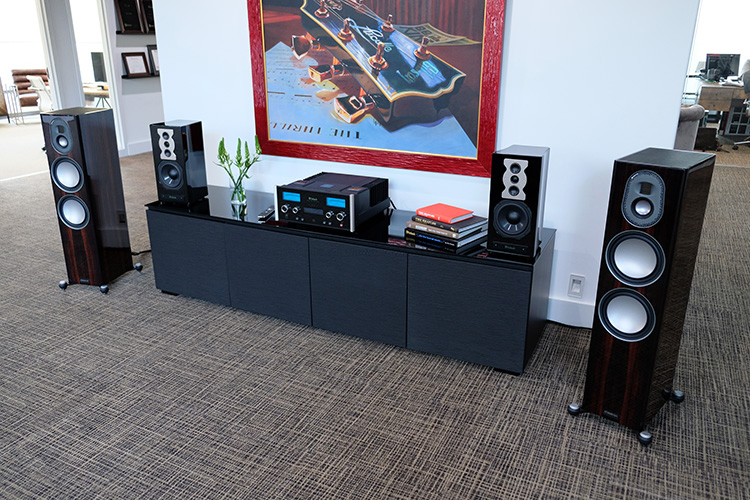 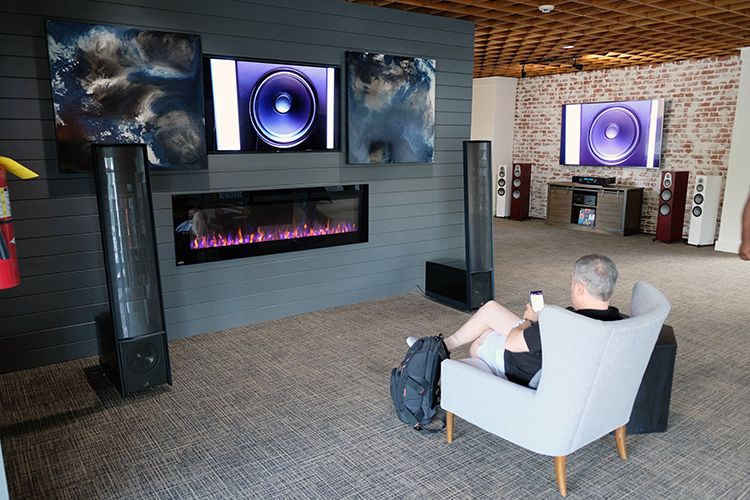 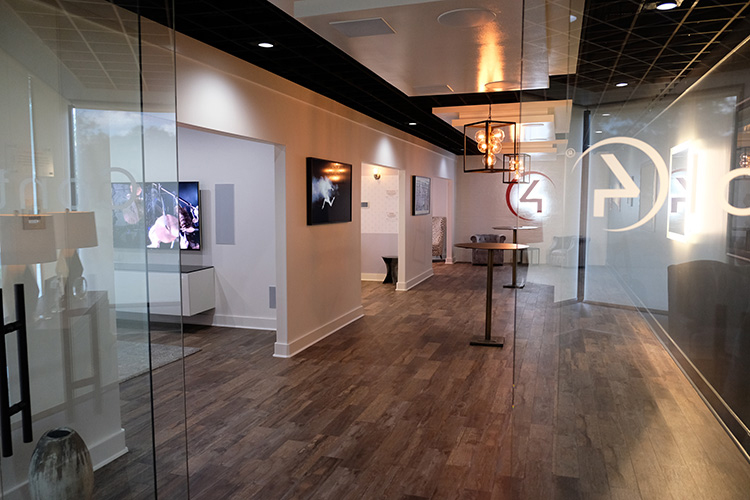 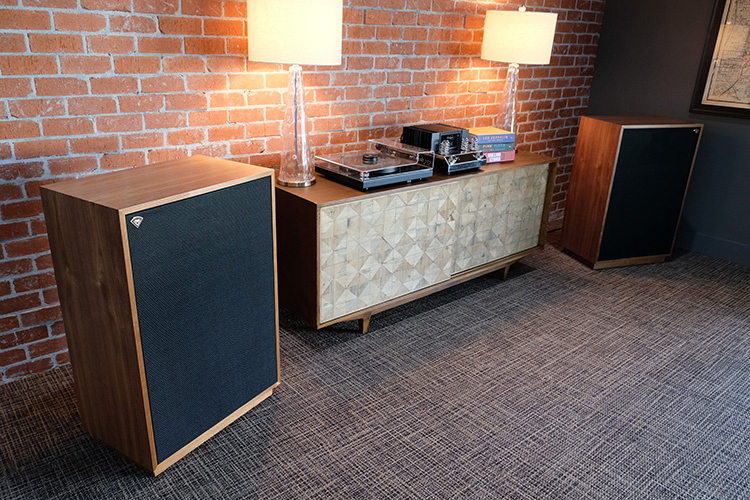 The event host, Georgia Home Theater, has been in business for 30 years. Apparently, they started life as a Laserdisc retailer (remember those?) and expanded over the years into a full-service A/V retailer. They moved into the large custom space that is their current location about 3 years ago. The retailer had several custom rooms set up with equipment from the various brands that they feature. They also had some large devoted home automation and custom install rooms for clients in search of those sorts of solutions. The overall feel of the place was airy, and all demo rooms appeared to be thoughtfully laid out, with many having room treatments to dial in the overall sound. It personally felt good to see an independent brick and mortar A/V retailer flourishing in a time of chain outlets and increasing online audio sellers. Georgia Home Theater seemed to offer a little something for everybody, from simple soundbars all the way to Klipschorns. The only thing they didn’t have were headphones. Attending the MartinLogan launch event were both audio press and invited clients and guests of the host store. 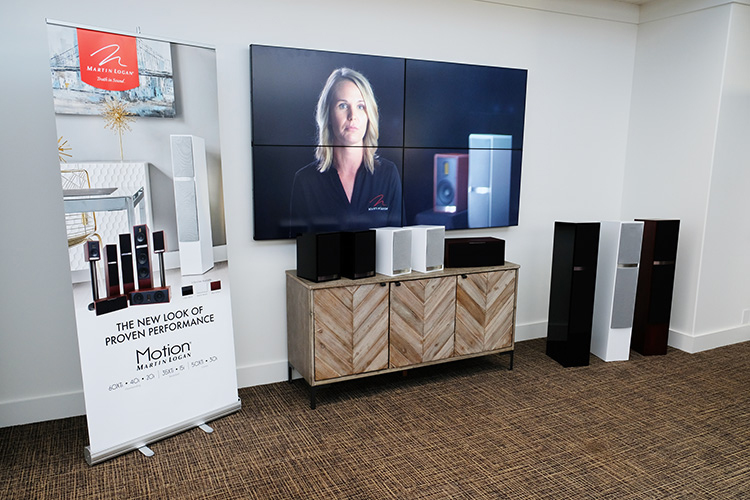 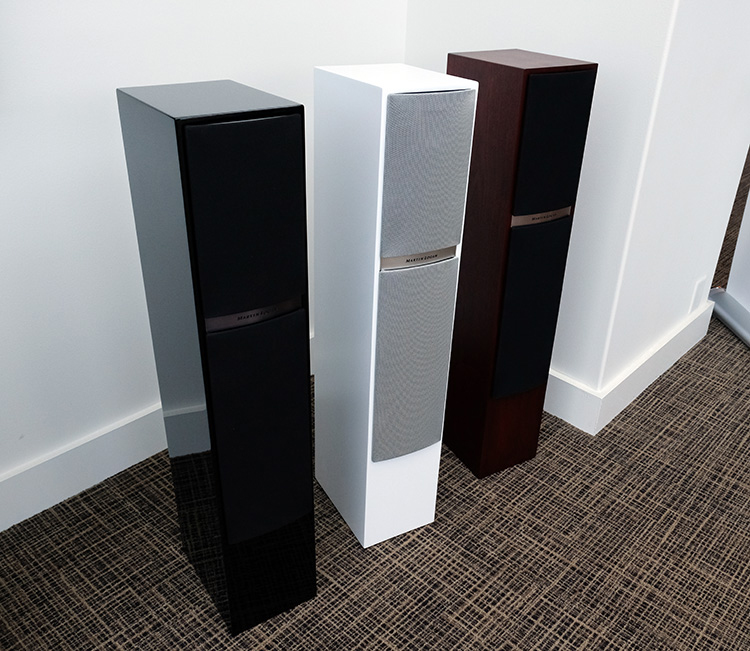 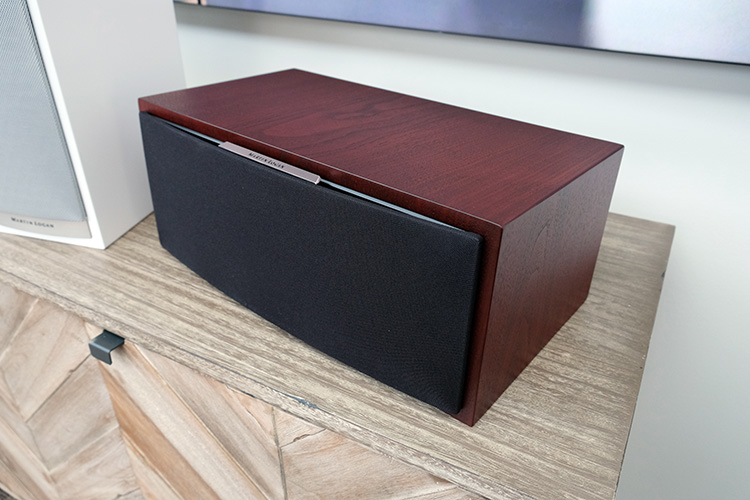 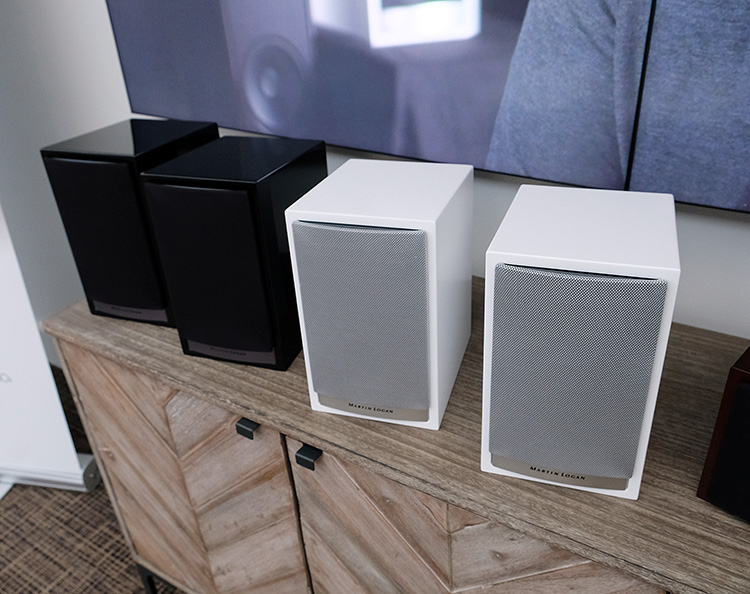 Getting down to the nitty-gritty of it, MartinLogan’s updates to Motion line are almost exclusively cosmetic, save for a new concave dust cap on the aluminum woofer drivers. This new addition is said to improve the rigidity of the cones and reduce breakup modes. The largest tower and center channel speaker models have also been given some additional internal bracing. Otherwise, we are treated to some new and modified finish options on the series. We now have gloss black with black grilles and gunmetal trim, matte white with silver grilles and silver trim and red walnut with black grilles and champagne-colored trim. The actual grille material has also changed from a perforated metal to fabric across the whole line. The overall look is clean, handsome and slightly elevated over the previous generation. Driver types, complement, and crossover design carry over into the updated models following the “If it ain’t broke, don’t fix it” strategy. Devin Zell, Marketing Manager for MartinLogan elaborated on how the entire Motion line has been very popular amongst their customers both for stereo and home theater applications. Many have praised the sound quality brought on by the Folded Motion tweeter, aluminum coned drivers and proprietary Vojtko crossover networks. So, the charge became to maintain the sound quality and enhance the aesthetics where appropriate.

The new Motion line consists of:

The new speakers will officially begin shipping in October 2019. 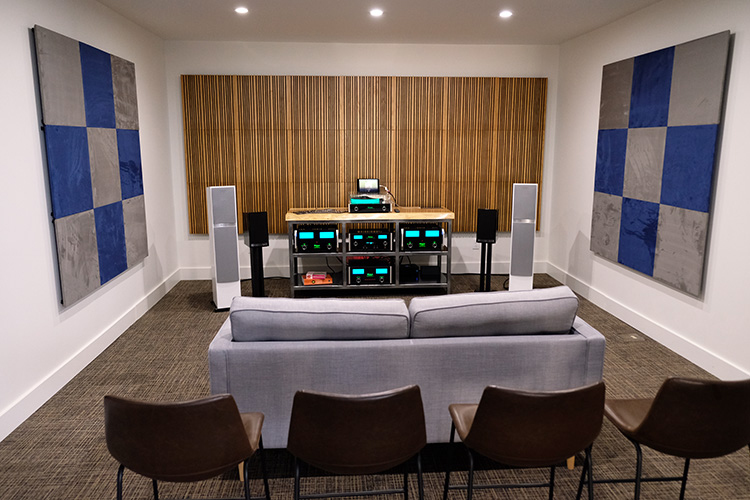 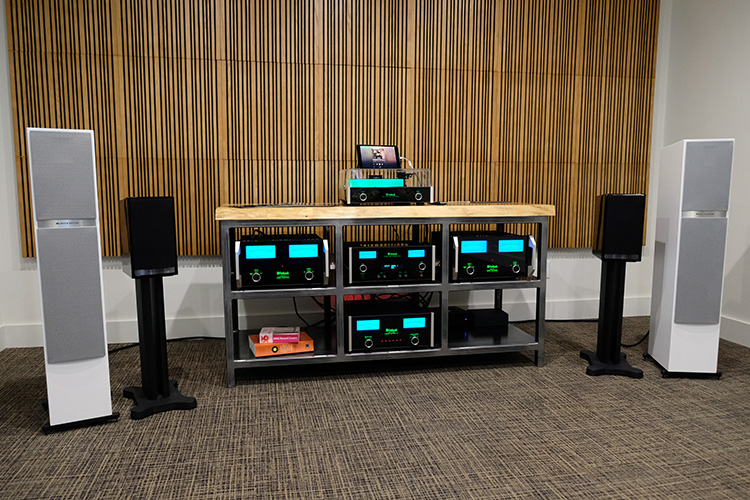 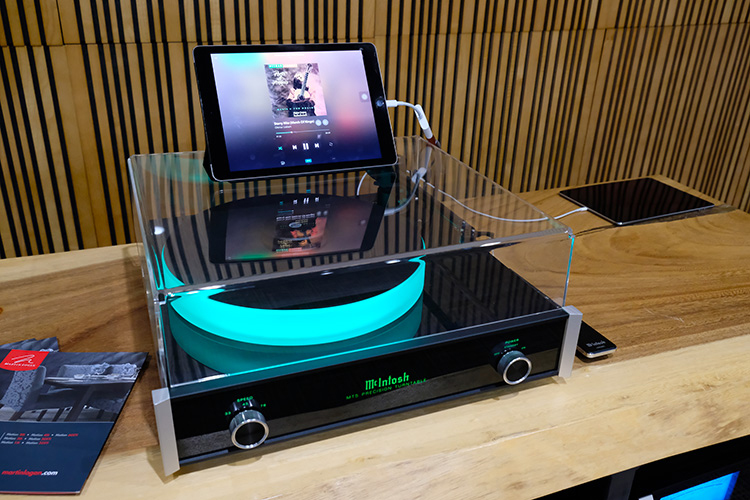 After a brief formal introduction to the line, I sat in on a stereo demonstration featuring a pair of white Motion 60XTi towers. They were fed music via Tidal streaming on an iPad, routed through a McIntosh C2600 preamplifier and to a brawny McIntosh MC 462 stereo power amplifier. Probably a little bit of overkill as most owners would almost certainly be pairing these speakers with more modest gear, but it was fun nonetheless and no one in the demo was complaining! I was very impressed with what I heard from the 60XTi in this admittedly well-tuned environment. They exhibited a big and spacious sound quality that extended well out beyond the speaker boundaries. They also maintained an admirable level of detail retrieval with most instruments that I heard, particularly piano and acoustic guitar. Bass was deep and powerful with excellent reach and impact. Most listeners were requesting modern jazz and pop recordings with most of the listeners indicating approval with what they were hearing. Holly Cole’s vocals on “Train Song” sounded especially rich and present with precise imaging. This is exactly what you would want from a $3200.00 pair of speakers.

The other demo featured another pair of Motion 60XTi towers for left and right duties and a 50XTi center channel speaker playing select parts of the Live Aid concert sequence from the film Bohemian Rhapsody. Only these front three channels were playing, again in a purposely treated room. I hadn’t had a chance to see Bohemian Rhapsody yet, but those concert sequences, especially the expansive crowd shots, looked amazing projected onto a 100-plus inch screen. The 50XTi provided a seamless bridge between the two towers when audio panned across the front channels and Remi Malek’s vocals as Freddie Mercury sounded impeccably clean and clear. Those Folded Motion (AMT style) tweeters really did a good job at keeping the treble sounding detailed and dynamic without getting harsh or thin. I did wish they would have had a complete surround system set up with rears and maybe some ATMOS speakers as well, buts as a demonstration of what the main speakers were capable of in a more ideal situation, I’d say it was fairly successful. If nothing else, it showed that the Motion series was quite capable for home theater use when set up well. 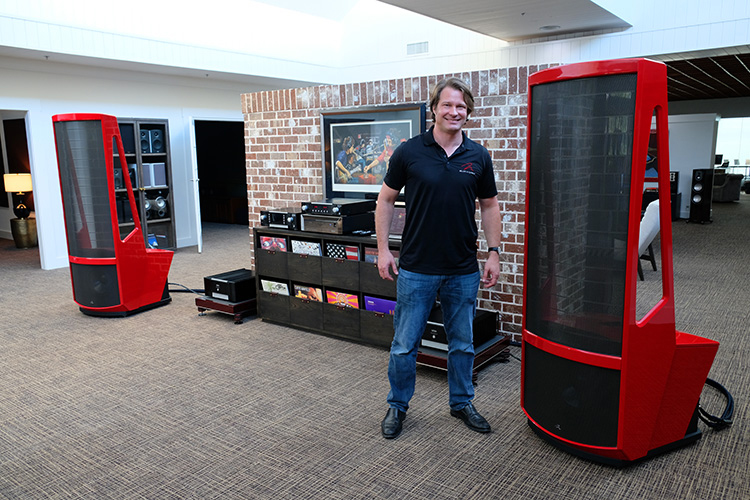 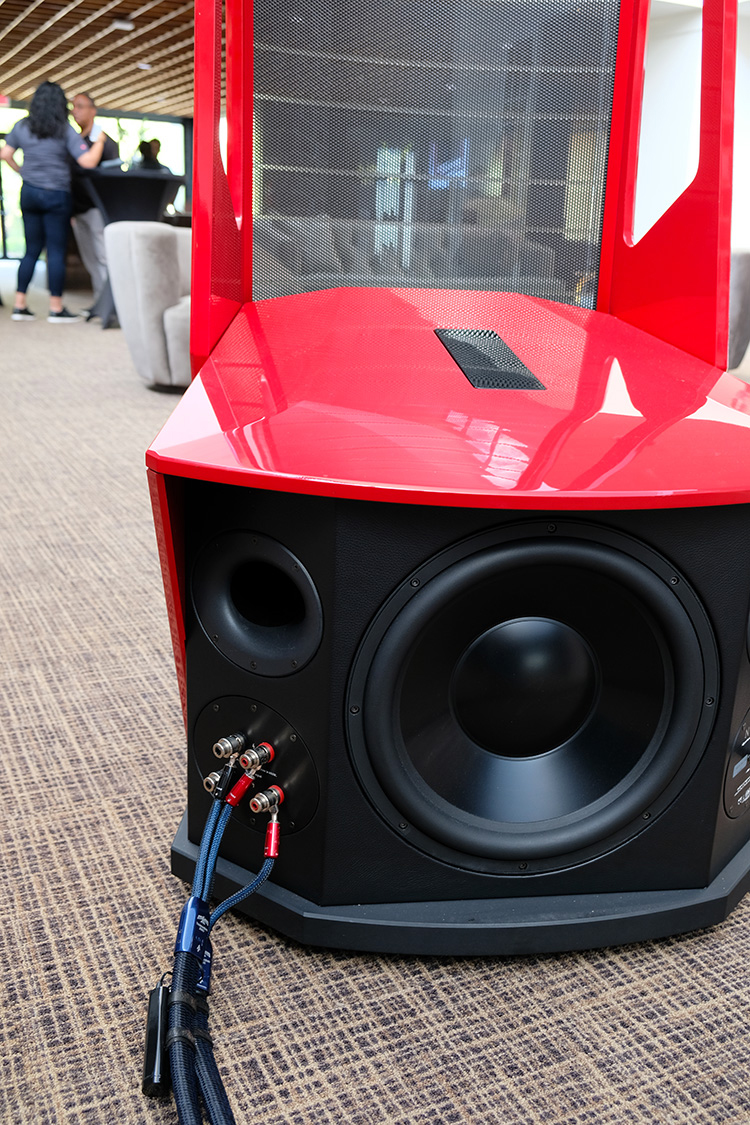 Now I would be remiss if I didn’t mention the, very red, flagship pair of Neolith electrostatic speakers conveniently positioned and playing music right in the middle of the store. Not at all garnering any attention whatsoever from the attending guests…. yeah, right! Powered by another “stack of Mac,” they sounded about as good as I’ve ever heard them, perhaps a little bit bass shy, being in that huge open area. I’m glad to say though that both the Motion demos seemed to be holding their own against such imposing competition. 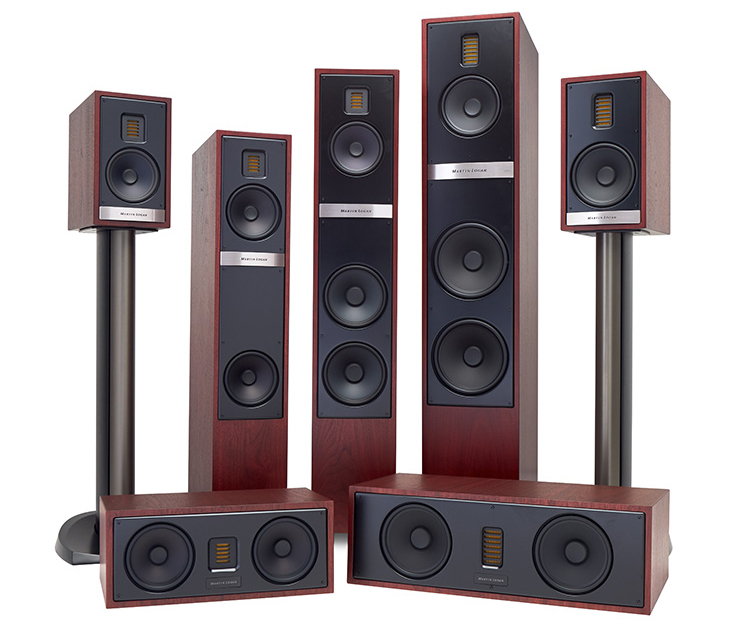 All in all, I think MartinLogan’s Motion series provides a lot to like about them. Good, tasteful looks and great sound quality for the asking price. And the unveiling seemed well attended in an extremely favorable host location with positive impressions going all around from genuinely interested attendees. Not bad at all!

Keep an eye on Secrets of Home Theater and High Fidelity for a review of the new MartinLogan Motion series coming soon.