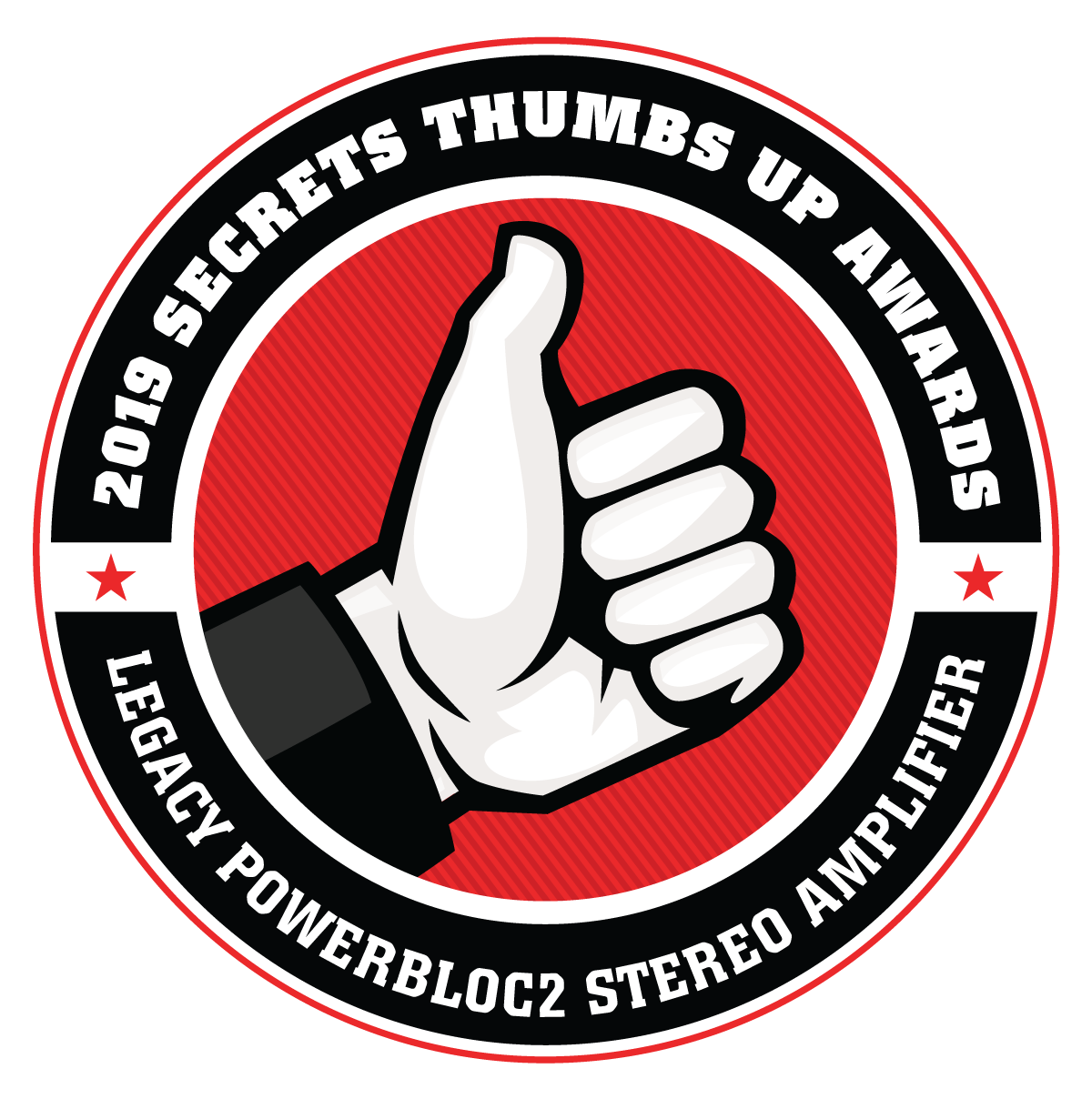 Rated at 325 watts per channel into 8 ohms, its dual-mono design offers a separate dedicated power supply for each channel. It has more than enough headroom to drive the most demanding speakers while delivering premium sound quality to any audio system.

Legacy Audio has been a well-respected maker of some of the finest speakers since Bill Dudleston founded his company in 1983. I have had the opportunity to review the Studio HD and Silhouette speakers in my home and have visited with Bill at the Legacy HQ in Springfield, Illinois a few times over the years. When they decided to make an “ideal amplifier” for their speakers, they built both two-channel and four-channel Class D designs called Powerbloc2 and Powerbloc4. Today, I’ll be reviewing the Powerbloc2 Stereo Power Amplifier.

Having family living in Springfield, Illinois has afforded me the ability to drop in on the Legacy Audio headquarters on several occasions and the team there have always been gracious hosts. I have seen the manufacturing process for most of their speakers, from the CAD cutting tables for the cabinets to the assembly areas, the studio where they voice and tune the speakers, the shop with the sheets of exotic wood veneers and the guys who hand stain them. Then at the end of the tour, Bill took us into his music room, and we listen to tunes and enjoy swapping out speakers. One year I got to see his plans to build the Wavelet. Upon the next visit, I got to hear it in action. It came as no surprise to me that Bill would eventually make an amplifier that would make his speakers sing. It was a logical progression.

Class A is a musically sweet design, but very inefficient because much of its power is lost to heat. Class A/B gives you more muscle and those amps are usually big and heavy. Class D (with the ICE modules) offer an efficiency of greater than 90% and they run cool. Advances in their design now allow for extremely low distortion levels. Switching power supplies push distortion out of the range of human hearing. The Powerbloc2 has a THD of 0.005% at rated output and a TIM of 0.0045%. Dynamic range is a wide 117dB. I have listened to several Class D designs over the last few years and have been generally very impressed with their performance and musical finesse. See my review of the Lyngdorf SDA-2400 Amplifier for another fine example of the breed. 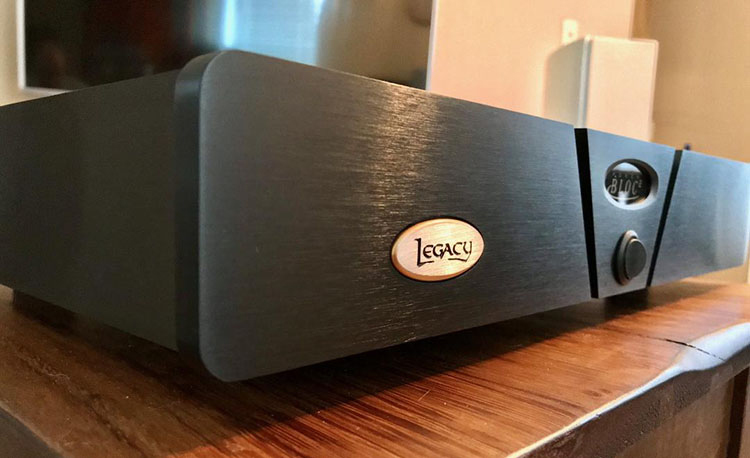 ICEpower is a powerful amplifier design that is stable under hard loads, offers low distortion, high efficiency (power goes into the music, not into the air as excess heat) and in the case of the Powerbloc2 design, lots of power with plenty of reserves. If your speakers are hard to drive or inefficient, the Powerbloc2 will be able to drive them with no trouble.

The front panel is made of thick milled aluminum and has a nifty blue logo that lights up when the unit is powered on. There is a master on/off switch on the back, and a switch on the front as well. On the back side, there are hand-soldered XLR balanced inputs and gold-plated RCA inputs. A single 12-volt trigger allows the Powerbloc2 to be powered on/off by a pre-amp or receiver. The power cord is detachable, should you desire to swap it out with a different one. 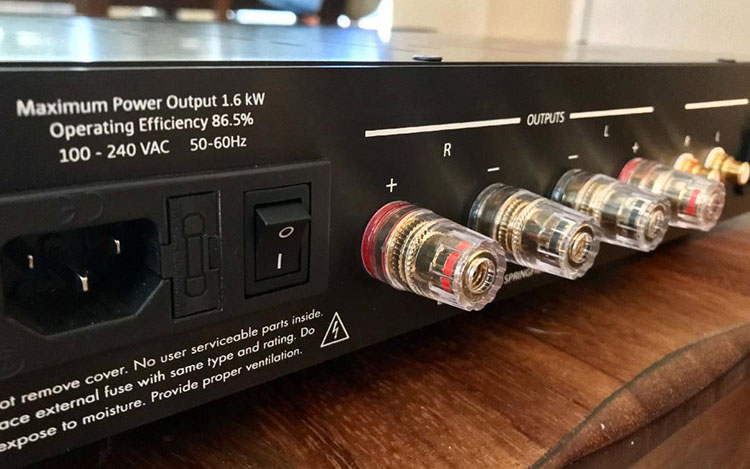 On the top of the unit are thin slots for air convection. There are no internal fans as they simply are not needed. This keeps internal dust build-up to a minimum. The top is made of a thicker-than-average grade of aluminum which adds to the quality feel of the amplifier. 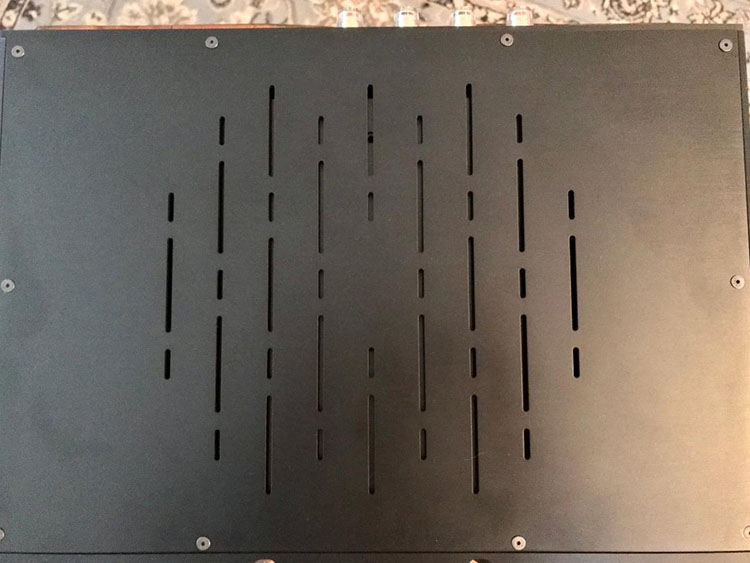 Just holding the Powerbloc2 in your hands, you’ll be impressed with the construction and the quality of the unit. The Class D design also allows for the amplifier’s light weight of just 13 pounds. What would a 325-watt A/B design weigh? I own a 125-watt, seven-channel amp now that is a back-breaking 70+ pounds!

That’s a major advantage of Class D, it affords a compact and lightweight chassis. Because they don’t need space for air circulation, they can be placed into tighter spaces or inside a closed audio cabinet. After hours of playing music and movies, the top of the Powerbloc2 barely felt warm.

For my review, I ran unbalanced inputs (XLR on one end, RCA on the other end) from my Emotiva UMC 200 pre/pro to the Powerbloc2. My speaker cables were Zu Audio Julians (8ft pair) to my Revel F38s. I also got to pair the Powerbloc2 with a brand-new McIntosh C49 preamplifier (a review of this unit is forthcoming). I listened to all music with no EQ, room correction or the benefit of extra low end from a subwoofer.

Now, during my course of musical evaluating, I listened to 70’s rock, classical orchestra, male & female vocalists, New Age to Jazz and the Powerbloc2 sounded amazingly clean and articulate. The bass was noticeably punchier than my current Class A/B amp and the soundstage was well balanced from both left to right and front to back. This is no small thing as I have recently moved to a new place and my intimate music space has roughly doubled in size. I’m still adjusting and experimenting with my new digs and still playing with absorption and diffusion throughout the room. I like being able to crank the volume to 11 sometimes (when no one else is at home), and I like the sound of the extra room.

As destiny would have it, I was in possession of a music test disc that was authored by Mr. Dudleston himself. Last time I visited the shop, he gave me a copy of a disc he burned at a show in Toronto from 2014. If these tracks were good enough to demo the sound quality of his speakers, they should be equally adept at showing off the sonic prowess of the Powerbloc2. There are over 16 tracks on the disc, and I will only comment on a few of the standouts (I think they all sounded great, but not all genres were my cup of tea). 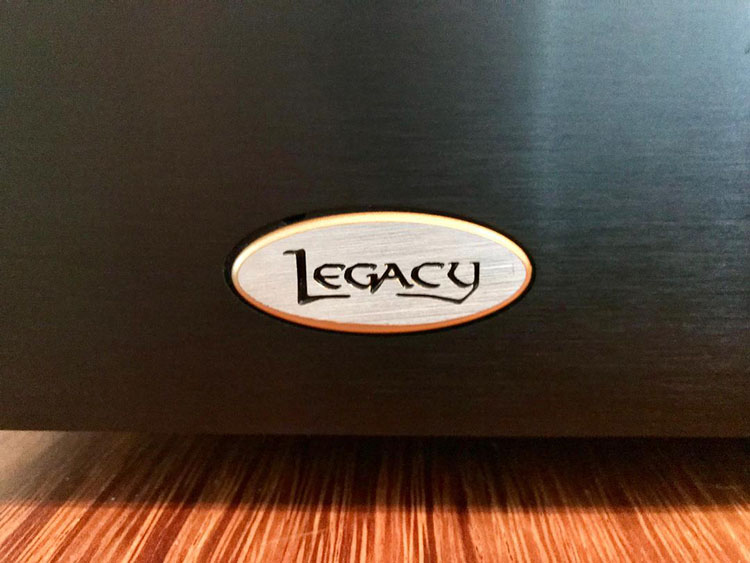 First up was Loneliness House by Greg Brown; a delicious blend of blues with a thumping, driving beat. Brown’s voice has a nice mid-range that reminds me of a smoky bar from The Big Easy. The bass was solid with interspersed acoustic and electric guitars that spread out across the front of my room. Everything sounded laid back and natural. Considering I was not using any EQ, my speakers pumped out bass with authority. It was not loose or tubby but had an impact that you could feel gently, deep in the pit of your stomach.

Next, I listened to Nils Lofgren on acoustic guitar playing Keith Don’t Go (Ode to the Glimmer Twin) to a live audience. Wow! His playing is amazing. The close mic made it seem as though he was playing just a few feet in front of me. I was struck with how real it sounded. Every nuance of his strumming was laid bare, every scrape or thump on the guitar body was easily heard. This made me want to see a live performance of him playing. The sense of the venue’s large room was palpable.

Christian McBride is a jazz double bassist that showcased his skills in Night Train. The deep notes resonated, vibrated and skipped back and forth with ease. Even the decay of the vibrations had a natural feel to them. Acoustic instruments are a great way to evaluate sound on a speaker and in this case, the degree of control from the Powerbloc 2. Not only for the loudest passages, but also the quiet nuanced sections as well.

Girl in the Red Dress by Gregg Karukas is that late-night jazz piece with a punchy bass line and a tinkling piano overlay. The drums have both punch and snap. The sound stage is both very wide and deep. I could listen to this music with the lights out on a rainy night and be deeply satisfied by the time I called it a night and went to bed. From the tinkling of the chimes and driving bass guitar, the sound was marvelous. Because of the huge power reserves of the Powerbloc2, you could really pump up the volume and it just sounded more “live”. What a fine jazz ensemble demo piece!

Sweet Emotion by Aerosmith starts with a startlingly loud thunderclap. Did the Powerbloc2 care? Not at all. I am not a big fan of these guys, but their music is pretty catchy and foot tappingly good sometimes. I noticed a nice sense of space around my Revels. Next, the late Stevie Ray Vaughn played some of Tin Pan Alley (Roughest Place in Town). Here is another master guitarist that is so well recorded, you wonder why you haven’t sought out his music before. His guitar duetted with his rough voice, all while the bass line carried the two along in its loving arms.

Alright, time to skip through some tracks and comment on a few of my favorite tracks: Amazing Grace, sung by a tremendous baritone named Wintley Phipps. Even with a full orchestral arrangement, his voice pierces through and hits your soul. He has such depth and range and it was beautifully captured in this recording. The Powerbloc2 had no trouble with either the subtle sounds of the opening or the incredibly dynamic crescendo of the climactic finish. If I weren’t so manly, this music could make me cry from the sheer beauty of this gentleman’s voice. I noticed in between tracks that my speakers fell into complete silence. Class D amps are ON when the music plays and complete OFF when there is no signal. No hiss whatsoever!

Finishing up and skipping through some wonderful tunes, I closed with a real speaker buster; the recently deceased artistic genius of Jean Guillou playing Gnomus from Moussorgsky’s Pictures at an Exhibition on the pipe organ. The range of the deepest pedal note is felt in the gut as well as heard. I was impressed by the Powerbloc2’s ability to deliver tight deep bass. The ambiance of the venue the organ was placed in came through with some good reverberation time. The decay of the reverb was natural and demonstrated the complete control over the Revels. If there was a sonic chink in the armor of the Powerbloc2, I could not get it to reveal itself. All styles and genres sounded superb with the Powerbloc2.

The silence between soundtracks was as black as could be. Even with my ear up to the tweeters, I heard no hiss. Deep bass and sweet highs with silence in between songs is exactly what you want in both the speaker and the amplifier.

If you can’t afford a Legacy speaker system, perhaps a LEGACY POWERBLOC2 can make your current speakers sound their very best. Clean, dynamic power is achieved with a Class D amplifier that is built to last for a very long time.

I enjoyed listening to my music with the Legacy Powerbloc2. It had finesse and muscle, imaging was excellent, and it had complete control of my speakers, allowing me to hear what they can do without the need for EQ or a subwoofer. Because ICEpower runs cool, thermal shock and heat are eliminated which should add years of life to this well-built dynamo. And there are no fans to pull in dust. If you need power in a tight space, the Powerbloc2 can easily fill a cozy spot in an equipment rack with less ventilation space than a Class A/B amp would need.