Projectors are often described as having a “film-like” image. We are all trying to replicate that movie theater experience at home and so it seems that achieving that look is what we would strive for. The SIM2 SUPER LUMIS has shown me that in a modern projector; film-like is no longer what we want.

All our sources now are pixel-perfect digital sources. Ideal projectors are razor-sharp and incredibly bright. We can focus down to a single pixel on the screen. Very little we see in the theater today is film sourced or projected from film, and nothing we watch at home is stored on film. So “film-like” is not what I’m after in a projector. What I’m after is something that shows me every last detail and imperfection in what I’m watching. A projector as true to the source as possible.

With that in mind, the SIM2 SUPER LUMIS projector is a machine that is capable of doing just that. Powerful, precise, and utter revealing of everything it projects onto the screen.

The Design and Setup of the SIM2 SUPER LUMIS Projector

The SIM2 SUPER LUMIS is a 3-chip DLP that can put out an eye-popping 5,000 lumens. SIM2 offers three different lenses for it, depending on your throw distance. Despite the size and light output, the whole projector has an 18″ x 18″ footprint. Zoom and focus are electric while vertical lens shift is done on the unit with an Allen key. There is no horizontal lens shift available.

The SUPER LUMIS can switch between six different memories, each of which allows for its own picture settings as well as zoom and focus. The SIM2 can also shift the image up or down on the DLP chips. This allows you to move between a 2.35 and 1.78 image without using a motor for vertical lens shift. The benefits of this are faster shifts between two image settings and a more accurate one due to fewer parts.

Setup of the SIM2 SUPER LUMIS was performed in part by Alberto Fabiano of SIM2. Anyone that buys this projector will have it professionally installed, as you can’t go pick it up on Amazon. Once properly positioned for 1.78 and 2.40 support on my Screen Innovations SolarHD 2.40 screen, it is easy to set up the rest of the features. The menu system in the SIM2 provides support for a full range of gamma, white point, and color space settings. Your screen will affect all of these, but you can get very close with no calibration.

Setting up lens memories for the multiple positions took very little time. With focus and zoom being controlled by the remote you can stand at the screen to get it perfect. Rename the source memories and you can access the correct one quite easily.

Other features in the SIM2 SUPER LUMIS include a variable gate that acts like an iris system. For dark scenes it lets in less light to enhance shadow detail and lower black levels. There is a motion interpolation mode for those who enjoy that effect. For 3D is uses the DLP “triple-flash” technology that runs at 144 Hz to allow each eye to see a frame three times.

The SIM2 SUPER LUMIS Projector In Use

Our opening film was the JJ Abrams reboot of Star Trek. A good choice as SIM2 informed me that he has one of these projectors himself to use for watching his films. The opening attack sequence looks fantastic with good black levels, even skin tones and amazing levels of detail. Skin tones are clean and accurate and motion resolution is fantastic. Even with the lights up in my room I could still watch and enjoy the film, as the SIM2 is capable of over 45 ftL on my screen in low lamp mode. 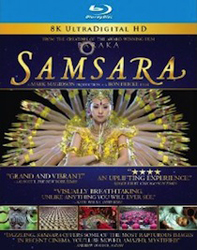 Samsara offers a high-resolution, 70mm transfer that is one of the best available on Blu-ray. With the SIM2 SUPER LUMIS I saw something on it that I had never seen before: aliasing. No previous projector that I have used has been able to resolve the fine detail required to show aliasing on this transfer. However seated 10′ away from a 122″ 2.40 image I could make out this issue. The SUPER LUMIS does not treat flaws and imperfections in your content nicely. It exposes the raw detail of the transfer, warts and all, and doesn’t smooth it over.

The dark shots that fill the opening sequence of Drive look wonderful. The contrast ratio in the scene stands out with bright lights reflecting against a dark background. The nighttime hill scene in Harry Potter and the Deathly Hallows, Part 2 made it easy to see the detail on everyone that was there. There is nothing that disappeared into a fog or was obscured away.

With the Dynamic Black feature enabled I could see slightly darker blacks but I also could notice when it engaged and disengaged. This was particularly true when watching Argo and you had a scene with jump cuts. If the light level was slightly different between the jump cuts the light level would change more radically with Dynamic Black enabled than it should so I wound up leaving it off. 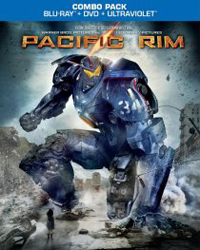 Pacific Rim boasts a reference quality transfer and almost all of it takes place at night. The giant robot vs. monster battles here jumps off the screen. The image that filled by screen was razor-sharp and all the details are clearly visible. Shadow details are easy to make out and the neon lights of Hong Kong pop off the screen. The beautiful image keeps me watching long past the plot does, a testament to the power of the SUPER LUMIS.

I am not a fan of 3D, and really never have been, but that is mostly due to the technology behind it. If all 3D looked like it does on the SIM2 I would be happy with it. With the triple-flash technology it has a rock-solid image that is free of artifacts and ghosting. The powerful bulb inside allows you to have a 3D image that is bright, punchy, and full of color. Hugo, Toy Story 3, and Cars 2 all looked wonderful in 3D on the SUPER LUMIS.

The most impressive about the SIM2 is the amazing level of sharpness and detail. Every single texture is on display with the utmost detail and nothing obscured. Swapping between the SIM2 and other projectors it is immediately apparent how much sharper the SIM2 is. Even with a 3-chip DLP setup, which can have trouble with alignment, nothing is out-of-place. Combined with the accurate colors and bright image, the SIM2 image is nothing short of amazing.

The SIM2 SUPER LUMIS Projector On The Bench

All measurements are done from the projector lens to remove the screen as a variable. A C6 colorimeter is profiled using an i1Pro spectrometer and CalMAN 5.2.0 software is used with an AccuPel DVG-5000 pattern generator.

I made no adjustments to the SIM2 beyond what you can do without calibration equipment. I set the Brightness and Contrast controls to avoid clipping, I adjusted the Color and Tint slightly, and I used the presets. With the HDTV color space (Rec. 709) and a D65 color point it is very close. The grayscale is very good with no visible errors at all and an average dE2000 of 1.62. The gamma tracks very close to my desired 2.4 as well at 2.38.

In the colors there is a bit of an issue with blue but all the other colors are free of issues. Measuring blue error, especially at lower saturations, is very tricky as there is very little light to measure. There is some slight blue error but I didn’t notice it in my time viewing it. 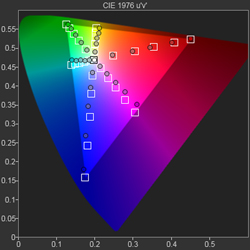 SIM2 also has a software package, their Live Colours Calibration, which lets you dial in these settings beyond the user tools. With my screen I don’t find them to be necessary. If you have a screen that isn’t truly color neutral, perhaps a Black Diamond, then this will let you adjust the SIM2 SUPER LUMIS to account for that.

The video processing in the SIM2 is very good as well. It passes the full luma and chroma resolution from all colorspaces I tested it with. It also does well with 2:2 and 3:2 deinterlacing. I imagine anyone spending this much on a projector would pair it with a video processor to handle those duties, though.

Using a lux meter I measured just over 2,000 lumens off the SUPER LUMIS and a native contrast ratio of 5,000:1. That contrast ratio is very good for a DLP projector. The lumens number seems low compared to the specifications but my bulb had a large number of hours on it and I was using the high-contrast lens which drops the light output. Still it provided over 45 ftL of light on my 122″ 2.40 screen in low lamp mode. The brightness was closer to an LCD than a projector and I had no trouble watching football with the lights on.

If you want to play video games on the SUPER LUMIS you will be perfectly fine. The input lag measures in at a very nice 22.2 ms using the Leo Bodnar lag tester. All three locations have the exact same measurement as well. This is very fast for a home display and you won’t be able to blame the SIM2 if your gaming skills aren’t up to par. 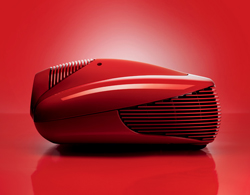 Images are tack sharp, exposing slight aliasing and artifacts in movies that had never been present before. Colors are neutral and accurate out of the box with a full selection of adjustments to make. 3D movies look fantastic and make me actually want to watch them, which I never thought possible. The motorized lens system works far been that those of cheaper models by working much faster and being more accurate. The image is bright enough that you never need to worry your screen is too large.

The flaws that I have with the SIM2 are relatively minor. The dynamic black feature is too noticeable to me in daily use, and so I disabled it. Additionally the contrast ratio of 5,000:1 that I measured comes in below JVC units but ahead of what you’ll see in a real movie theater. Watching movies this difference never once bothered me as the image popped off the screen and was not dull in any way. The SIM2 SUPER LUMIS brings the movie theater experience home in ways no other projector has before.

It is obviously expensive but it has provided me an example of what is possible for a home theater projector. It is the best image I have seen in my home to date. With it installed I would have no reason to go to the movie theater again. A true reference product that will deliver an image that will never disappoint.