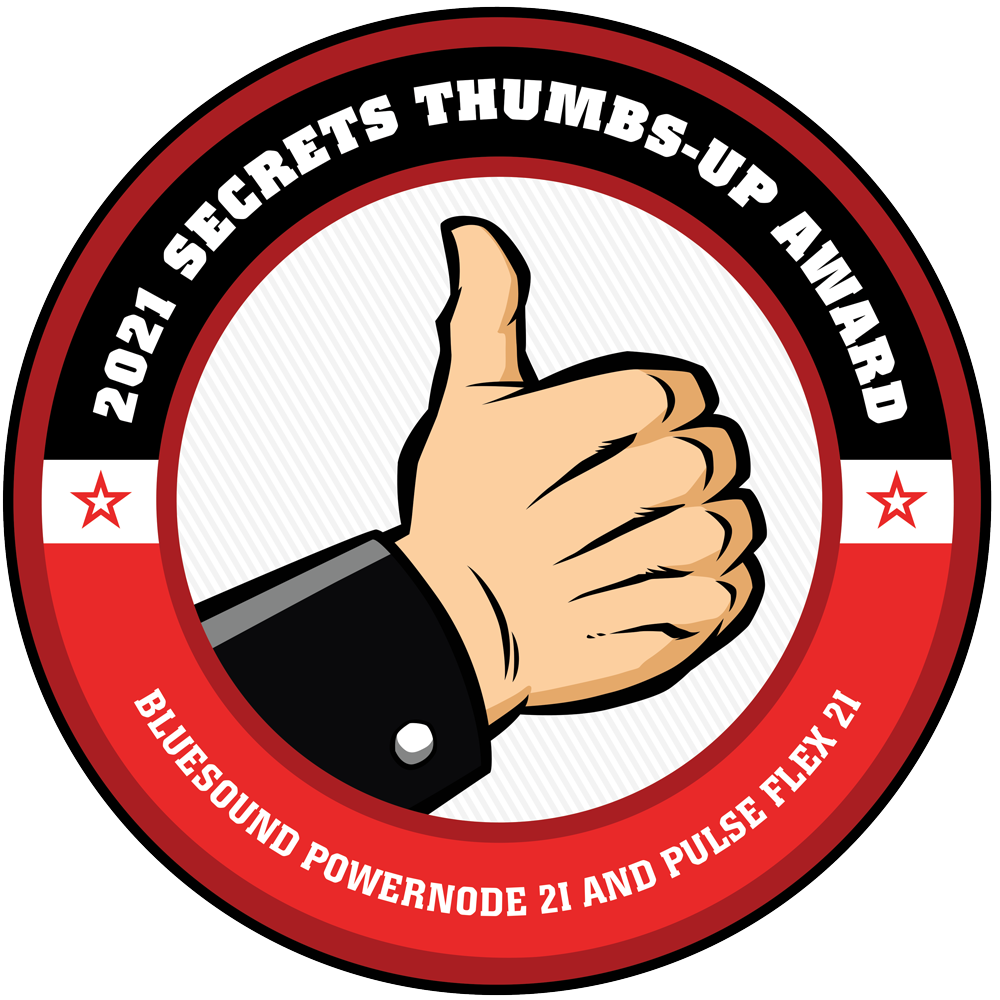 But they can do more than just play music from the internet. With a few tweaks in the Bluesound app, they can serve as wireless surround speakers in a home theater system.

Bluesound’s Powernode 2i Wireless Streaming Amplifier and Pulse Flex 2i Wireless Streaming Speaker deliver high-quality audio, premium convenience, and great value. But they can do more than just play music from the internet. With a few tweaks in the Bluesound app, they can serve as wireless surround speakers in a home theater system. Lenbrook, distributors of Bluesound, NAD, and PSB; have sent me a Powernode 2i amp and two Flex 2i wireless speakers which I plan to configure as rear surround channels in my home theater.

Bluesound is well known as a maker of convenient home audio components that deliver great sound and great value. I’ve covered their products before; namely the Pulse 2 wireless stereo speaker which is now supplanted by the Pulse 2i. Streaming music to speakers and amps is certainly nothing new; it’s most definitely “a thing.” The number of components that can stream music from the internet is vast.

Today though, I’m trying something new; suggested to me by Lenbrook, distributor of Bluesound, NAD, and PSB. With the latest firmware and the Bluesound app, it is possible to group components together and use them in new ways. Specifically, I’ll be employing a Powernode 2i two-channel amp and a pair of Pulse Flex 2i speakers as wireless surround channels. Since the Powernode 2i includes two analog/digital combo inputs, I can connect my surround processor to it, then stream the information to the speakers wirelessly. This is a great way to add extra speakers to a media room or small theater without running cables from the rack or entertainment center to the back of your seating area. 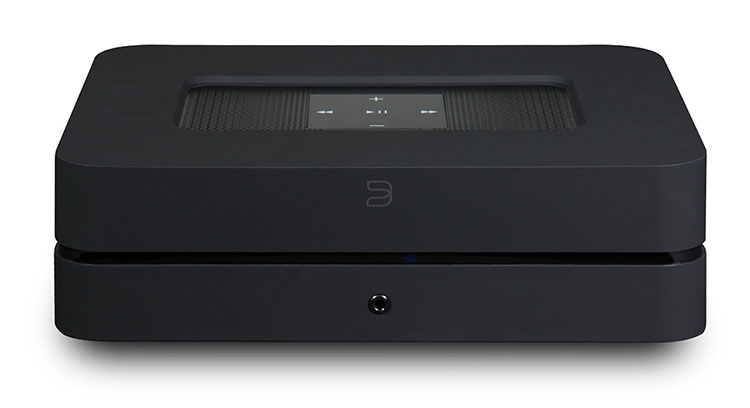 Some might argue that the traditional two-channel integrated amplifier is no longer relevant. With so many ways to listen to music that don’t involve physical media, one wonders if there will continue to be a need for amps that just manage disc players, tuners, and turntables. By adding a few internal components to an amp’s chassis, the need for physical source devices is eliminated. The amplifier acts as its own source by bringing the music in from the internet or your local network storage. At most, you might need an asynchronous USB port to connect a laptop.

Fortunately, Bluesound’s Powernode 2i has not done away with physical inputs. It includes two combo ports that can accept optical cables using the included adaptors, or 3.5mm analog plugs. And you get an HDMI port that supports ARC and eARC, perfect for smart TVs, while a USB port can handle a memory stick or external hard disk. But of course, streaming is its forte and for that, you get support for every conceivable file format and online streaming service. Through the BluOS app, you can bring in music from thousands of radio stations; or fire up a subscription to Tidal, Spotify, Amazon, Qobuz, and the like. You can also stream your iTunes library and Apple Music content using Apple AirPlay.

The Powernode 2i is all about driving your favorite speakers and it does that with a pair of 60-watt amplifiers. They use HybridDigital™ technology which ensures efficient power delivery and cool running. They can drive just about anything to high volume levels; enough to provide music for a party or plenty of exciting sound for movie night. And bass-heads will delight in the included subwoofer output. Bluesound provides traditional five-way speaker binding posts that can handle heavy-gauge cable, bananas, or spade connectors. 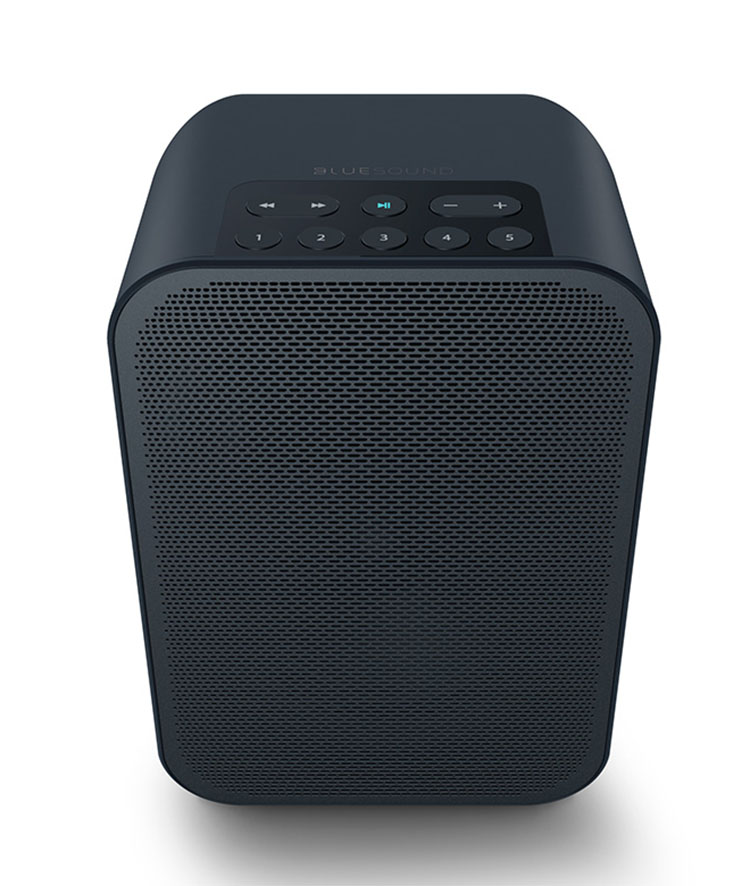 To pair with the Powernode 2i for my wireless surround sound experiment, I also received a pair of Pulse Flex 2i speakers. These diminutive boxes are surprisingly hefty and once fired up, produce an impressive level of quality sound. You can use them singly, placing them anywhere near a wall outlet, to stream music from all the same services mentioned above. They also include a single combo analog/digital input if you want to connect a disc player, and a USB port accepts thumb drives or external hard disks. 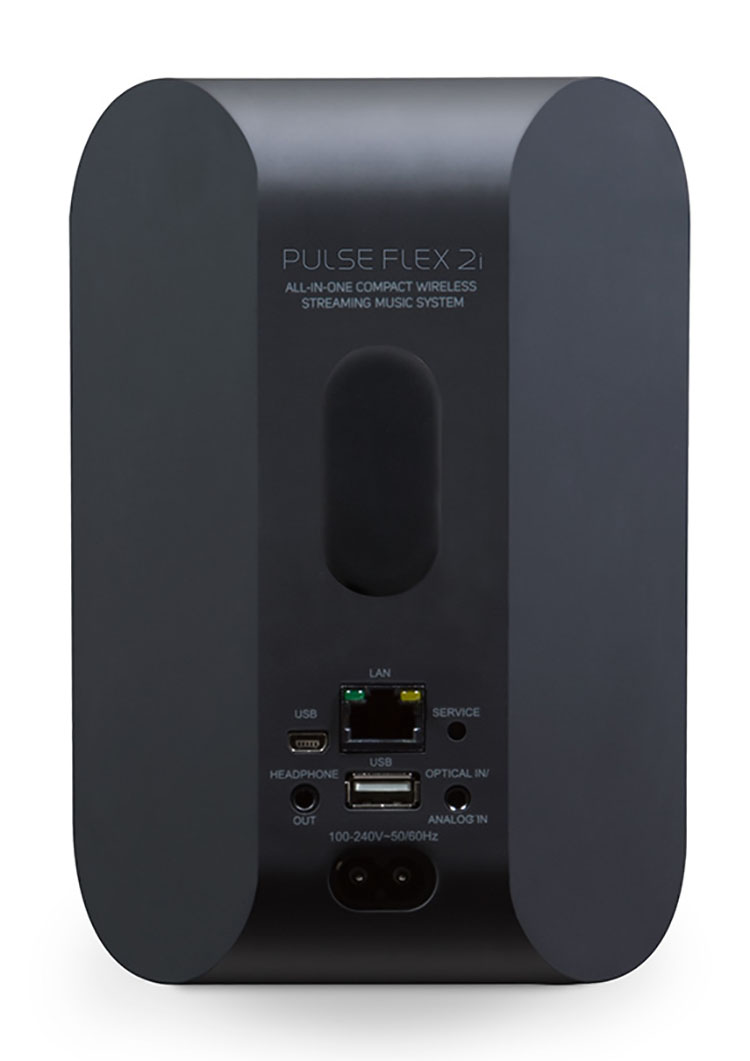 Both the Powernode 2i and Pulse Flex 2i are simply styled with a rubberized coating that resists fingerprints. They are small enough to put just about anywhere without calling attention to themselves. Available in black or white, they can blend into or enhance any décor. 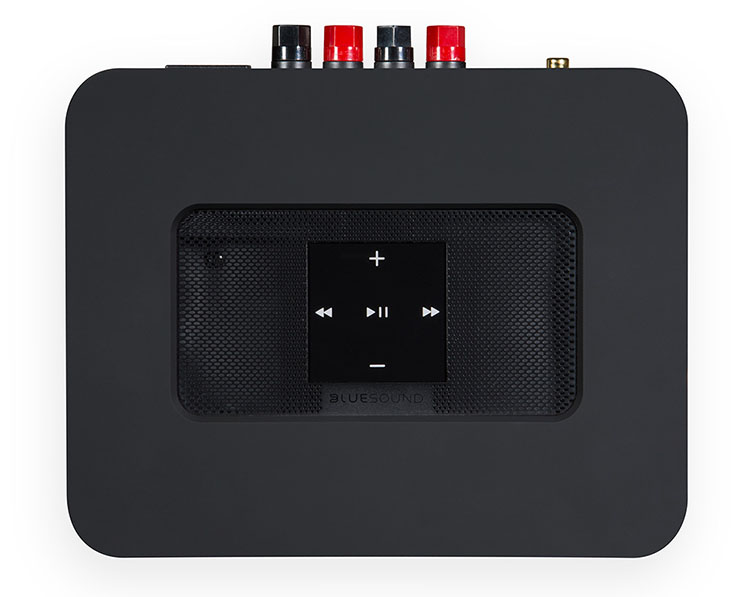 For control, the Powernode 2i and Pulse Flex 2i include small panels on top to adjust volume and select the next music track. Further settings are made from the BluOS app which runs on a phone or tablet; iOS or Android. Or you can control them with Amazon Alexa and Google Assistant. The app is where I turned to make this combination of components into a pair of wireless surround channels. BluOS allows one to group components, thereby sending the amplifier’s output to the Flex speakers. 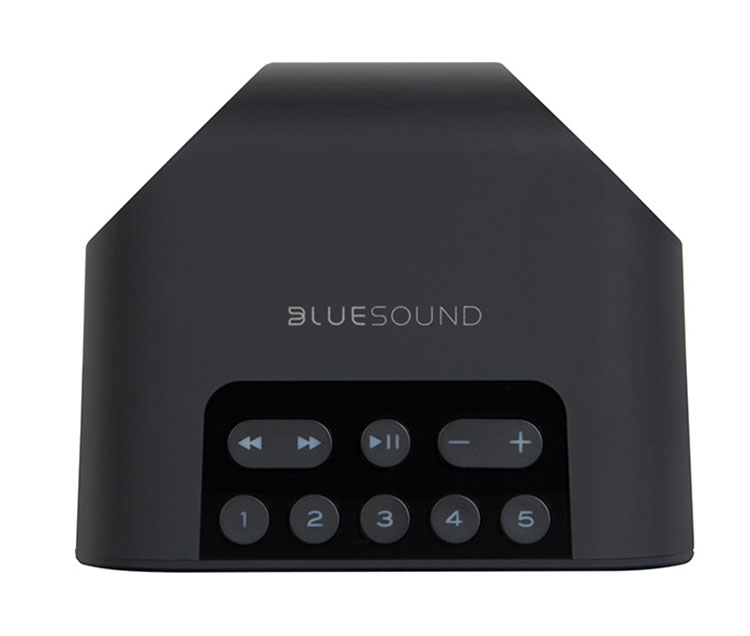 Initial setup of any Bluesound component first requires the installation of the app. I used an iPhone to configure the Powernode 2i and Pulse Flex 2i. I started by clicking “Add Player” which searched for components on my home’s Wi-Fi network. Once complete, the Bluesound app can see them and you can send music to any one or all of the players listed. 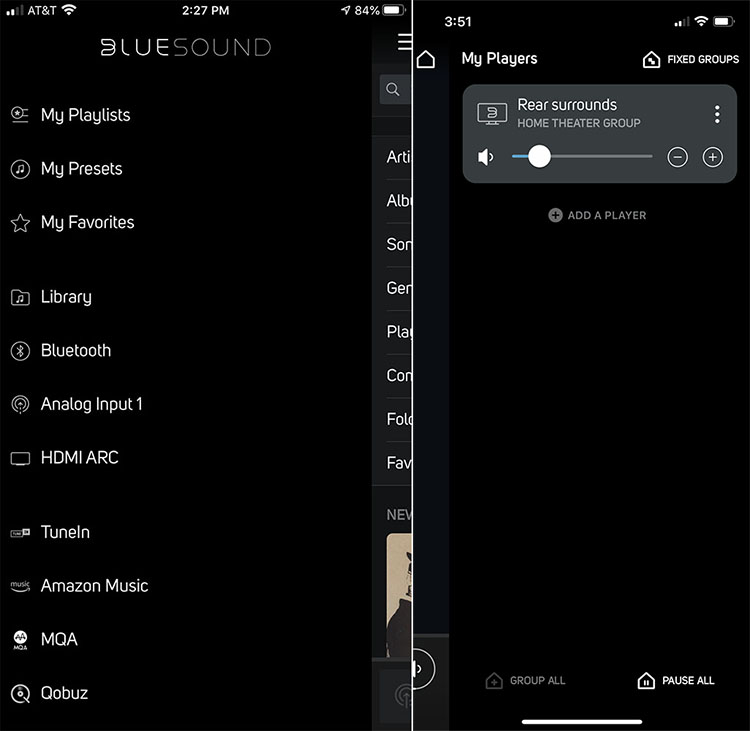 To turn the Powernode/Flex combo into wireless surrounds, I grouped them in the app as shown. That process also lets me set levels and assign the right and left channels. Then I connected the rear surround RCA outputs of my Integra DHC-80.1 processor to one of the Powernode’s combo inputs using an RCA to 3.5mm cable. This is an unusual item, but I was fortunate to have one in my magical drawer that seems to accumulate unused AV bits.

With a source connected to the Powernode 2i, Analog Input 1 appeared on my list of sources in the app. I selected it, then turned on the surround rear speakers in the Integra’s setup menu. I played a test tone and voila, the sound came out! It’s pretty cool that one can combine a 10-year-old processor with the latest in wireless gadgetry and have it work on the first try.

With the speakers set up in the back of my room, I balanced the volume using test tones and an SPL meter. I set the sliders in the BluOS app to around 75%, then fine-tuned levels using the Integra’s controls.

I have quite a few Blu-rays that include Dolby True HD and DTS-HD Master Audio 7.1 soundtracks. It was a cool experience to actually hear the rear surround channels in my theater for the first time. They add a good bit of extra spaciousness to an already broad and deep sound stage.

Starting off small, I watched a few episodes of Star Trek the Next Generation. These Blu-ray re-masters turn the original stereo audio into a well-realized 7.1 encode. Though the bulk of the action takes place up front, the surround and rear channels carry a lot of ambient effects which were more present thanks to the addition of the Pulse Flex 2i speakers. They also added a bit of punch to the dialog which I wasn’t expecting. Putting my ear close to one of the speakers revealed subtle bits of consonance that expanded the actor’s voices into a larger presentation. More presence = always a good thing.

I also watched both Guardians of the Galaxy films. They have a DTS-HD Master Audio 7.1 encode which really shone in this configuration. The more I got into the movies, the more I wanted to add the extra speakers to my system. Everything sounds larger and fuller even though there isn’t a tremendous amount of extra information coming from the rear channels. It only takes a few small cues to make a big difference.

To finish up with a classic, I watched 1979’s Alien. The original film is mixed in Dolby Stereo, but the Blu-ray delivers a superb DTS-HD Master Audio 7.1 remaster. Again, the subtle ambient sound effects became the star; not because they called attention to themselves, but due to the way they added to the overall presentation. You won’t hear a ton of sound coming from those rear channels but when taken as a whole, they add a tremendous amount of realism.

The Powernode 2i Amplifier and Flex 2i Wireless Speakers offer an easy, convenient, and unique way to add wireless surround channels to any home theater or media room for a reasonable price.

The Bluesound Powernode 2i Wireless Streaming Amplifier and Flex 2i Wireless Streaming Speakers are more than just music players. Their versatility as extra channels in a home theater or media room is something I haven’t seen from other wireless audio products. With an app-based setup using a phone or tablet, creating those extra channels is easy to accomplish. And the Flex 2i speakers’ small size and simple styling make them easy to place where they will blend into your room. If you haven’t experienced rear surrounds, or any surrounds, before, this is a great way to improve your experience for a reasonable price and without the need for extra wiring or bulky speaker cabinets.

I was quite enamored with the extra presence provided by rear surround channels. The larger and deeper soundstage was apparent even though the actual audio cues were subtle. The dialog was especially impressive with just a small added bit of sound from the rear. It made voices even clearer and more detailed than before. And with a few clicks in the BluOS app, I could listen to music quickly and conveniently.

I’ve always enjoyed my experiences with Bluesound products and the Powernode 2i and Flex 2i are no exception. To use them in this new way has just made them even easier to recommend. If you’re looking for an easy way to add wireless sound to your home theater, media room, or any room, definitely check them out.