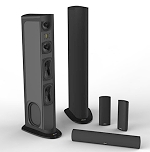 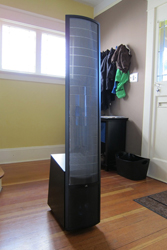 For many years now I’ve had a love for Martin Logan’s speakers. Though they have always been beyond what I was able to afford for myself, I’d often make a trek over to the dealer to have a listen when a new model was released, or I had a recording I really wanted to hear. The speed and transparency that their electrostatic panel seemed to offer compared to a conventional box speaker was always enchanting, and unlike many other speakers of similar designs, they played well without a massive amplifier and with rock and roll music.

At the CEDIA Expo in 2010, Martin Logan was giving one of the first demonstrations of their new Theos electrostatic speakers (ESLs) for the press and dealers. Though the conditions at shows are often less than optimal, when seated in the sweet spot of the room, the experience was nothing short of amazing. Sounds came from all around, causing me to check and make sure that there were no surround speakers setup in addition to the Theos. The soundstage up front was huge and open, and the speakers themselves were amazingly detailed. After I wrote about the experience, Martin Logan asked if I’d like to be one of the first to review a pair when they started to ship them, and without hesitation I said yes. So, here is the review of the Martin Logan Theos, which is a hybrid ESL, meaning it has an electrostatic panel with a conventional cone woofer.

Design and Setup of the Martin Logan Theos Electrostatic Speakers

Martin Logan made their name designing and building electrostatic speakers (ESL). An ESL speaker works by combining a thin diaphragm that is coated with conductive material between two electrically conductive grids (MicroPerf Stators, in this case). The movement of electricity over the grids causes the diaphragm to move, creating sound. The use of this technology has many benefits, including no crossover, very fast response due to the short transfer distance, and very low distortion. The potential downsides compared to a standard loudspeaker are that a panel isn’t as good at low bass frequencies, and the bidirectional nature of the panel can make setup and placement tricky, as well as provide a smaller sweet spot for the audience. 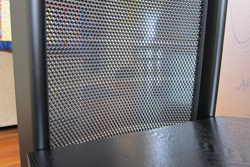 Knowing these limitations, Martin Logan has been addressing them for years. With one exception, all of their ESL speakers also include a conventional cone woofer to handle the lower bass frequencies. The Theos has an 8″ woofer that is crossed over with the panel at 425 Hz. This lets the panel handle all midrange and high frequencies while still providing frequency response down to 43 Hz in a standard tower speaker. Martin Logan has also designed their Curvilinear Line Source (CLS) panels to be curved and help to provide a larger sweet spot for listeners. 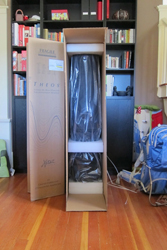 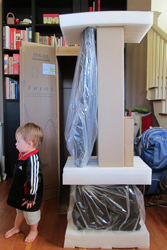 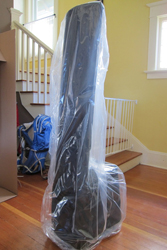 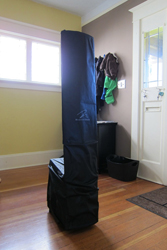 One surprise to people might be that both speakers have their own AC adapter. This is necessary to provide power to the MicroPerf Stators and helps to keep the sensitivity of the speakers higher than other panel technologies. The Theos also has two sets of binding posts on the back in case you wish to bi-wire your Theos, and nickel-plated jumpers are included if you don’t wish to. Adjustable feet that can be replaced with included spikes round out the features on the speaker that the user will interact with. After removing the Theos from their well-packaged boxes, I hooked them up to my Anthem Integrated 225 using a shotgun bi-wire pair of Wireworld Eclipse speaker cables terminated with spades. The binding posts on the Theos were very easy to tighten and took the spades easily, though they will also accept bare wire or banana plugs.

I initially setup the Theos with very little regard to position, as I wanted to get going as fast as possible. The initial reaction was that the sound stage seemed to come from a spot around 7′ high on the wall behind them, above even the speakers themselves. While the soundstage was also reasonably wide and deep, the very high nature of it was a bit odd. I also found that if I was standing up, my ears were high enough that I lost lots of the treble and midrange but the bass stayed strong. That narrower sweet spot was coming into play, though dome tweeters also have better horizontal than vertical dispersion as well.

After a couple of days, I finally had some more time to work on the placement of the speakers relative to my listening chair. I started by moving them further apart, and having the panel around 3′ away from all side and rear walls. I also toed them in so I could just see the panels themselves and the rear of the woofer was hidden behind it. After doing this, the soundstage came back to resemble what I had heard at CEDIA. No longer were voices coming from a couple of feet above the speaker but were anchored between the two panels. Instruments would extend beyond the edges of the panels, though not quite as far back as it has been in the smaller room in Atlanta.

Now that the speakers were better positioned in the room, I was ready to start playing a stack of records I had been accumulating waiting for these to arrive.

The Martin Logan Theos Electrostatic Speakers In Use

Once integrated into my system, I put the Theos through their paces with a wide variety of music. Leading off was the recent 45 RPM remastered version of Rumours from Fleetwood Mac. I had never been a big Fleetwood Mac fan, but I’d also never listened to them much as I just assumed it wasn’t my style of music. Once this release was announced I went back and listened to my wife’s copy of Rumours and then went ahead and ordered this set. I’ve been glad that I did as the sound quality is just fantastic and it’s been a go-to recording for evaluating a component, or impressing friends, since.

With the Theos, there was a clear delineation between instruments, but more impressive was the rendering of the instruments themselves and the detail. On one of my favorite tracks, “Never Going Back Again,” the upper end had wonderful sparkle of detail, but was not harsh at all.

Listening to Broken Social Scene’s self-titled record was another great test, as they are a band with a very dense, busy sound that can easily come across as a muddled bunch of instruments.  On “7/4 (Shoreline)” the opening few seconds are filled with a couple of guitars that play back and forth, and each had their own distinct location on the stage with the Theos. What was very impressive is once the drums kicked in after a bit, they were set well back in the soundstage, just a touch to the right of center, and I could clearly see exactly where all the members of the band were meant to be on stage when this was recorded. Being able to clearly pinpoint the instruments and performers in a band with a dozen people was quite a feat for the Theos.

Tea for the Tillerman is the first vinyl title from Quality Record Productions, and boy is it a good one. The album is dead silent in the background, very nice treble extension, and solid bass all around. Cat Stevens voice comes out from the Martin Logans anchored in the center, and the rest of the band surrounds him well. When “Hard Headed Woman” kicks up a gear, the Theos packed a punch with the drums while keeping the strumming of the guitars detailed and not blurring the sounds together. 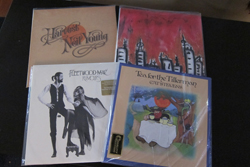 Since ORG released Nirvana Unplugged on vinyl, it has been an album I keep going back to. The Theos brings across details I hadn’t noticed before when I listened to the album, such as Cobain slightly clearing his throat at the start of a song. Fingers moving over guitar strings come across with the metallic edge that they should have, without being edgy and harsh as they often sound on some speakers. Solo guitar sounds just wonderful and natural with the reverberation of the strings hanging in the air. This can be a depressing album to listen to, recorded so shortly before Cobain took his own life, and the Theos brings across the emotion in his voice that makes it even more touching.

With my diverse musical tastes, I eventually made it onto some Metallica, as I had an idea that this would be a challenge for the Theos. To test just how well the woofer was integrated with the panel, I skipped ahead to “One” on the …And Justice For All album. At first, it was very impressive as the Theos brought across the lower quality of the CD recording. There was a bit of high-end noise and a bit of harshness at the top end on the album, which was recorded before they went huge with their Black Album. What I really wanted to hear was the drumbeat that kicks in during the middle of the track, and once I got there it was a bit of a disappointment.

This was the first place where I could hear a bit of disconnected between the panel and the woofer. With the fast drumming of Lars Ulrich causing the 8″ woofer to sound a bit fat and bloated, and a bit slow and out-of-step with the panel which was still handling the guitars and vocals. The rapid fire pace of the snare drum was just too much and broke up the illusion of a single, cohesive source. Of course, other speakers will suffer from similar issues, but the incredibly fast response of the panel just made the bit of slowness in the woofer that much more evident.

Unfortunately there are no bench tests for the Theos as when I was preparing to run them, my amplifier shut down and is currently being repaired/replaced, so I don’t have those available for you. 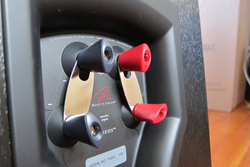 The Theos is overall a wonderful speaker and a joy to listen to. It had some issues with Metallica so if you are a head banger, this might not be your ideal speaker. With almost all other material, including most classic rock and alternative rock, the Theos handled everything with aplomb.