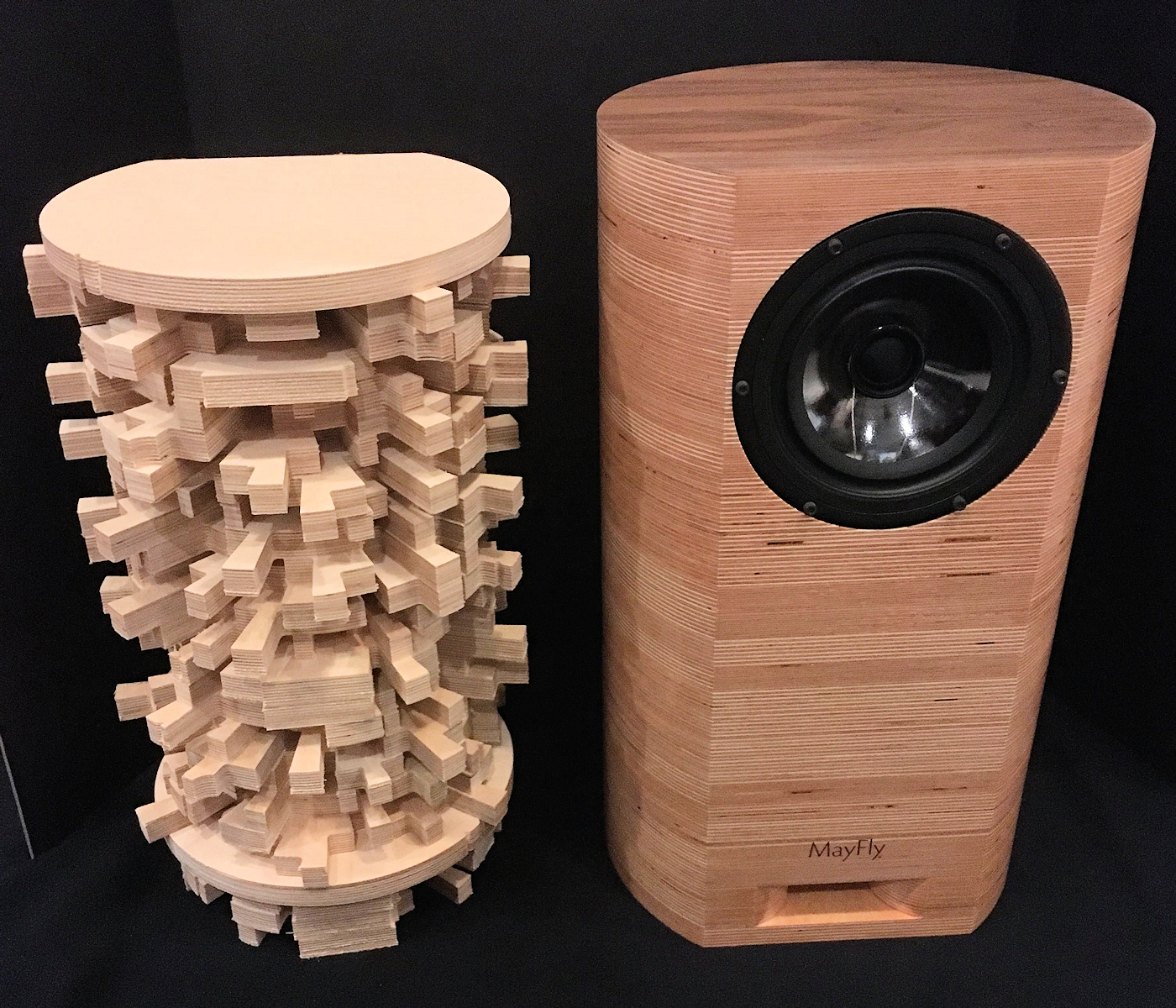 Those familiar with skyline diffusers, and what they contribute to your audio room, may find the MayFly 201A flagship speaker of interest. Skyline diffusers are essentially wall-mounted panels typically made of wood and usually mounted to make corrections in your room usually caused by reflections by scattering the problem echo aberrations. This hand-crafted, stand-mounted loudspeaker is highly refined in both sound and innovation and features the first internal skyline diffuser.

Designed and hand-crafted in Canada, the hotbed of speaker design, from engineering through testing, the 201A was the brainchild of Trevor May, a song-writing electrical engineer that up until the MayFly project, was involved with building professional audio gear, guitars, and amps. 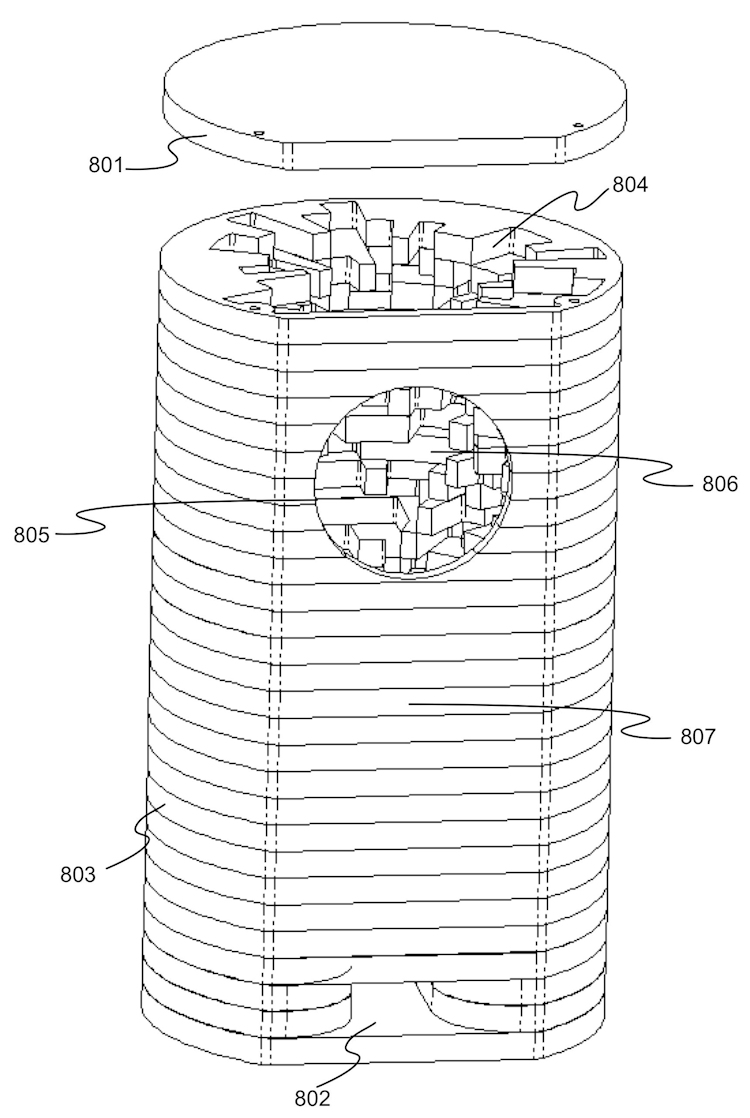 The specifications themselves aren’t all that remarkable, but that isn’t what this speaker is about. Speaker designers have varied their speaker cabinet configurations predominately for two reasons, internal standing waves, and resonance. Most speaker designers deal with this in several forms but most use internal damping material. May decided that the better way to deal with the problem is to disperse the sound energy using skyline diffuser theory, He was experimenting and came up with something really remarkable.

Influenced by a BBC paper he read on skyline diffusers, May realized the potential benefits and with a CNC machine, he could combine the speaker cabinet with a skyline diffuser design. His further experimenting led him to control some frequencies while omitting others, thereby “tuning” the cabinet for bass and mid-frequencies. A byproduct of the design was the controlled resonance in the cabinet allowing the sole driver to deliver the sound, not the cabinet. 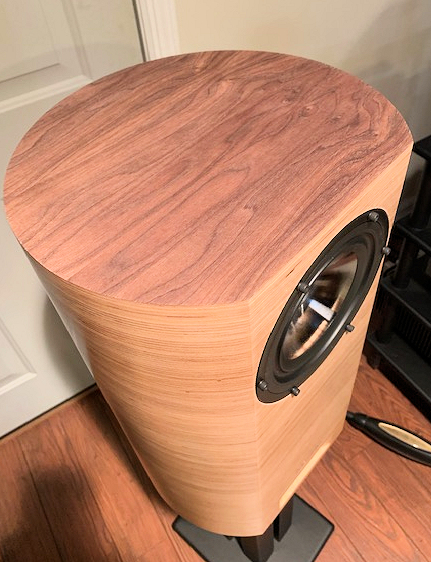 The MayFly 201A is really a visually gorgeous speaker for several reasons. I’m a big fan of layered birch veneer plywood and have used it myself on several projects throughout the years. I’ve built speaker stands and CD racks out of it, I just admire the look and find the layered plywood to be a strong as well as handsome material. The layers are easily visible and the wood grain color varies. May also hand finishes with a French furniture polish technique. I love the shape of the 201A as well, a full cylinder with the face flattened to accommodate the driver.

Trevor comments about his influence:

Trevor was influenced by the Loudspeaker Design Cookbook where he says “author Vance Dickason re-did all of Olsen’s diffraction experiments and produced very good results with a cylindrical cabinet, almost as good as a spherical cabinet. I chose a round shape to reduce external cabinet diffractions as noted by Dickason.” 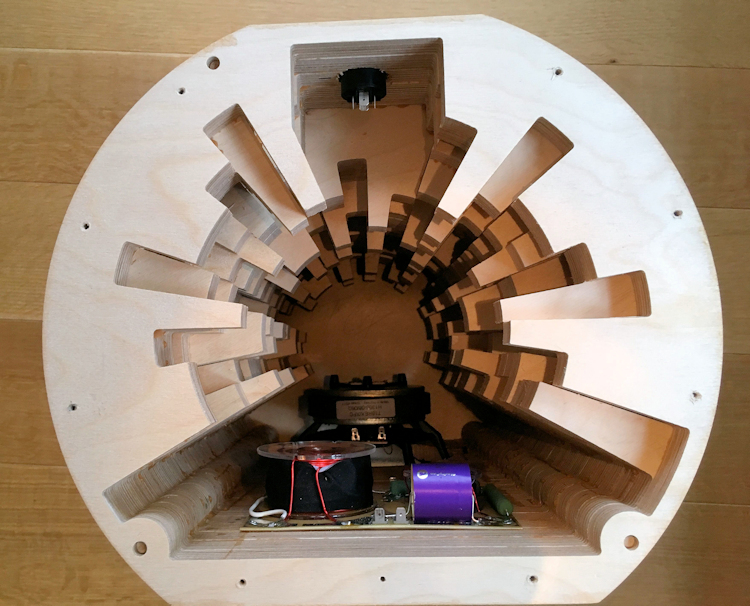 Functionally the front port and the matching rear indentation allow it to be carried, like handles, especially important taking it in and out of the packing container.

I just like the look, almost a DIY’rs delight, and I did read somewhere that May used the golden section for his speaker proportions – the ratio between the driver diameter and the cabinet diameter.

But I’m straying slightly from what I’d call a first in speaker design and integral internal skyline diffuser. Integral is the keyword as the layers of birch plywood are cut with a CNC machine and the internal side is varied. It is one layer thick, with no veneer on the outer surface. The speaker is made of 24 layers or rows which you can see and count, in the internal image. Each varied layer is hand-glued. 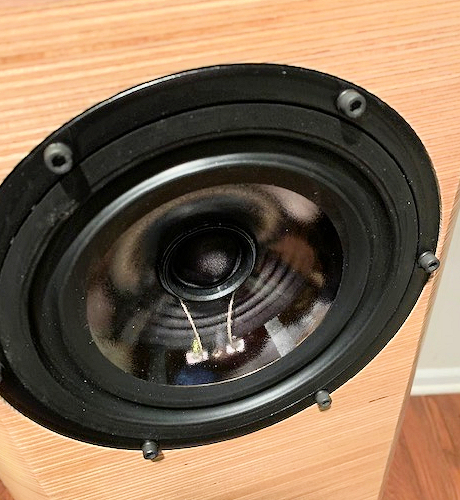 The next thing to notice is the singular driver, and what strikes me as interesting is the transparent cone. It’s almost as if May wants you to see the internal construction. Made by Seas, this OEM combination 8” woofer and 1” tweeter driver however is coaxial, with the tweeter and woofer aligned. This is not new but used, I think, wisely here in lieu of a multiple driver configuration and therefore perhaps, harder to control those internal waves. It is also a designer’s choice – I believe May’s intent was a smooth and full soundstage especially off-axis!

The rear of the speaker has low-mounted speaker posts just above what first appeared to be a rear port, but turned out to be simply, a handle to aid carrying the speaker, clever frankly. 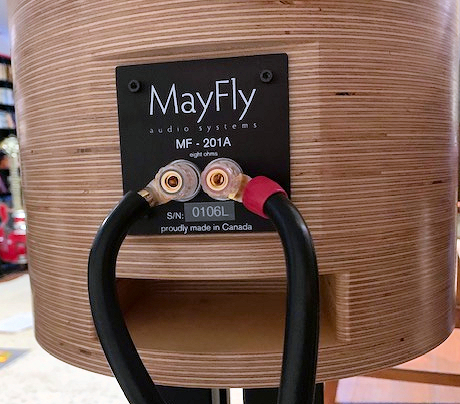 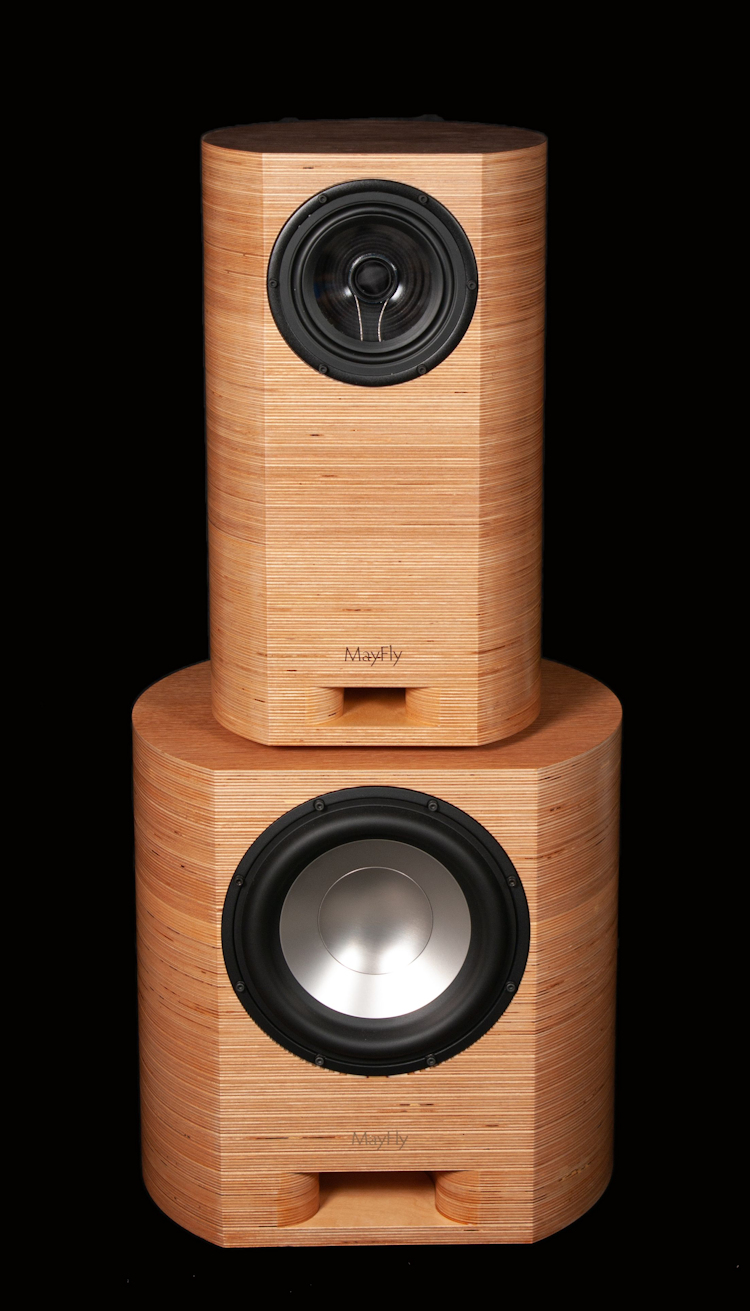 Because the speaker is so new, I wasn’t able to review the MayFly 201A with the now available 301 bass units that feature a 10” cone and reaches down to 18 Hz. C’est la vie, I made do with placing the 201A on my 24” stands which set the coaxial driver just above my ears while sitting. I played with toe-in and spacing and found in my limited room size, that most speakers sound right about the same spot, 8 ft apart and 2 ft off the rear and sidewalls. 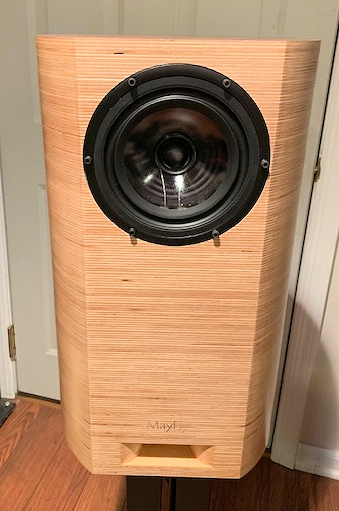 Sources used included a NAD C658 BluOS Network Player (primarily used for this review), an Oppo UDP-205 disc player, and a Marantz TT-15S1 turntable. I leave the amplifier for last because, during this review, I had begun another and found pairing the MayFly 201A speakers with a Cambridge Edge A integrated to be a match made in…You get the gist. The Cambridge is a remarkable amplifier that you will read the review for, shortly.

I enjoyed my time with the Mayfly 201A, might even say I loved them. The lasting impression is how they offered a warm, fully dimensional sound, and having a pleasant and warm soul to them. Perhaps it’s the acoustic guitar-sounding pedigree to them or the clean “deep enough” bass and upper range that I found so effortless. In a very short time, I proclaimed I could easily live with this speaker for a long time, even permanently.

Notwithstanding that grandiose orchestra music reveals the potential or the exact opposite, flaws, leaving gaps in the music; it is acoustic material I most enjoyed from the MayFly speakers. Listening to vocals, both male and female revealed clearly, why the 201A resonates with my musical tastes. Joni Mitchell’s Blue album sounds fresh and clear from Tidal, the music service. In fact, it sounds so good; I have yet further appreciation for her music. A Case of You, Joni is joined by James Taylor’s guitar work – the delicacy of both her voice and the guitar plucking is mesmerizing. 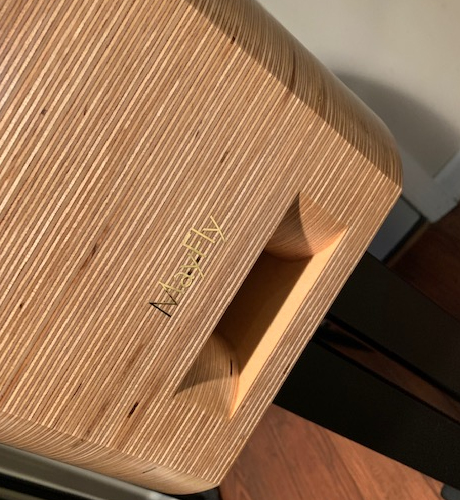 Similarly, switching to Van Morrison tracks, I find the sense of layers; guitars and pleasant percussions accompany his gruffness a rich mixture. The simulated “foghorn” sound from the alto saxophone is so airy and rich, it echoes off my walls, turn it up!

Discovering again, the track from Simply Red, Holding Back the Years, I discover how superbly engineered this track is. Just enough reverb on the lead vocals from Nick Hucknall and the really warm keyboard and horn sounds from the MayFly 201A make this one of those guilty pleasure songs now on my playlist for future speakers.

Amazing Jazz bassist Brian Bromberg reminds me how the MayFly handles complex lower range strings. The sound is superb, as I listen to the predominately solo track, Come Together from Bromberg’s album Wood. The twang of the strings, along with his ability to add percussion slaps to his playing is remarkable. The 201A gives the music, space, resonance, and air while reminding you this is “acoustical”, warm and earthy.

If you haven’t listened to the 1961 release of Ben E. King’s Spanish Harlem since the release of the MQA version, do yourself a favor, find it, turn it up and enjoy the melodic sounds, the musical separation of his voice with his backup singers and the sparkle of the xylophone playing. Giving the MayFly credit for giving the voices and instruments their individual space.

Experimenting with the toe-in, I found, as usual, a slight toe-in about 5-8 degrees. With the concern for the uniqueness of the MayFly 201A design, Trevor May gave his take on toe-in. I find it a nice tool for anyone looking for a methodology. And his short playlist is cool! Here is how he does it.

Here’s what I do to tune the speaker placement:  I put on a CD that I’m very familiar with and has a lot of spatial imaging.  When it’s playing I adjust the toe-in until I get the best 3D image in the room.  Then I confirm this with other music just to make sure.  My favorite test tracks are ‘slow disco’ from St Vincent’s ‘piano album’ (the one with just her and a guy playing piano – not the heavily produced electronic version).  If you get it right, then Anne Clark and the piano suddenly appear in the room with you in this huge sound image.  Then I follow that up with some orchestral stuff, like ‘pictures at an exhibition or something really big sounding like that.  I like to make sure that I can imagine the placement of each instrument, not just left/right, but front row/back row as well.  Then I follow that up with “what kind of man” by Florence + The Machine.  Although the latter track is heavily produced, you can get a big image out of it, especially the horns and backing vocals which, if you get it right, appear as a cluster of voices in the middle.  Once I have that, I pronounce myself satisfied.”

I don’t know how the MayFly 201A would fair on the bench, I’d sure like to see the results and someday I’ll get my act together and perform some basic tests. But I will also say, I really don’t care how they test, I just enjoy the sound. I did run some basic unscientific test tones, looking for unusual balance or frequency drops, found nothing significant from my handheld spectrum analyzer. Given the fact that from about 20 to 100 Hz I found quite flat and a slight uptick about 2 kHz and a roll-off reached 20 kHz, easily.

The MayFly 201A has to be one of the most conceptually unique loudspeaker designs that I have ever come across. And that uniqueness pays dividends in the sound department too! 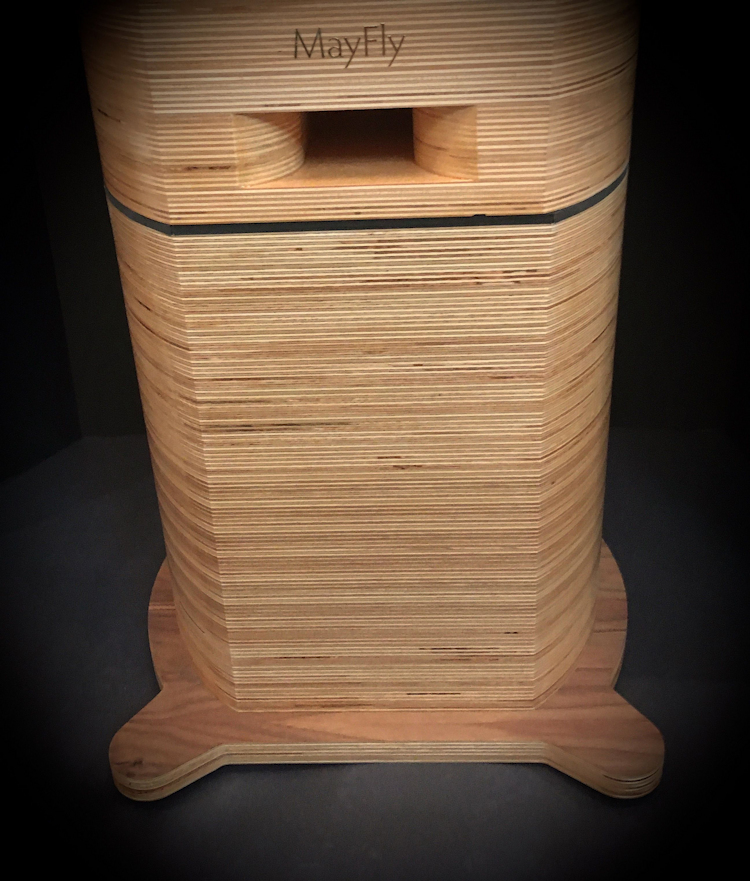 If a speaker could be described as sounding “un-digital-like”, I’d say the MayFly 201A is that speaker. Perhaps what I describe some may say is more about the music you feed the speaker, but I found this speaker just feels analog, like describing the difference between a tube amplifier and a solid-state one. The mid-tones are richly detailed while the bass effort is just right, not exaggerated or overwhelming. There is enough upper range sparkle and extension that the 201A is a great all-around speaker. Sad to see them go, but I do recommend them, nice work Trevor, can’t wait to see/hear what you do next.