Pass Labs, one of the most prestigious names in audio, has launched a terrific headphone amplifier.

It was only a matter of time before Pass Labs entered the headphone amplifier arena, and the HPA-1 is their first product in that category.

At $3,500, it is not cheap, but the build quality matches the price. It’s a heavy piece of equipment, and the sound is fantastic.

Headphone amplifiers seem to be the rage currently, with most audio companies marketing at least one model in their portfolio. They range in price from a few hundred dollars to several thousand.

Pass Labs has just released their entry into this market, the HPA-1, which is fully analog (it does not have a DAC).

The HPA-1 has two gain stages, both running in Class A. The power supply is analog (not a switching power supply), with the transformer having a mu-metal shield as well as a Faraday shield to minimize noise. The transformer has three times the capability that would otherwise be required.

The HP-1 was designed more like a small power amplifier than a traditional headphone amplifier. It will drive headphones that have impedances from 15 to 600 ohms.

The amplifier uses a complementary topology with a cascoded J-Fet input stage and a Mosfet output stage. The design is fully discrete and uses very small amounts of feedback and has a wide bandwidth. 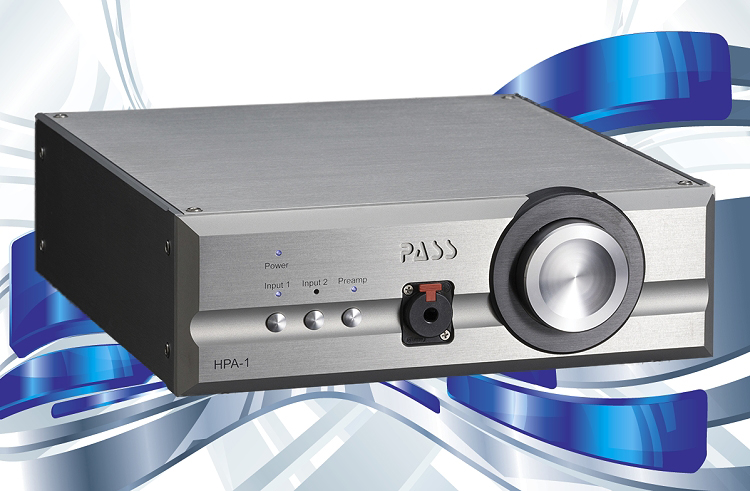 On the front panel, three inputs can be selected: Input 1, Input 2, and Preamp. The headphone jack fits a ¼” phone plug that is on headphone cables. It is a locking phone jack, so when you want to remove the headphone plug, you must push the red “T” above the jack towards the chassis, and then pull the headphone plug out.

The volume control is very large and typical of Pass Labs products. I love the large volume knob as I have very big hands.

The outputs use vertical Fairchild Mosfets, and a single pair of devices are used for each channel.

There is local capacitor decoupling for each channel, plus CRC filtering before the regulator. The result is a noise level that is extremely low, allowing the listener to hear very fine detail in the music.

The volume control is made by Alps and is an industry standard. Great care has been taken in the parts selection like the use of 1% metal film resistors and fiber glass circuit boards.

Switching and mute functions are controlled by a custom programmed microcontroller.

I thought perhaps that the HPA-1 might use some trickle-down technology from the new X.8 amplifier series, but the topology is different from the X.8 amplifiers in that current mirrors the voltage amplification stage, but the input Toshiba Fet transitors are the same.

The rear panel is shown below. 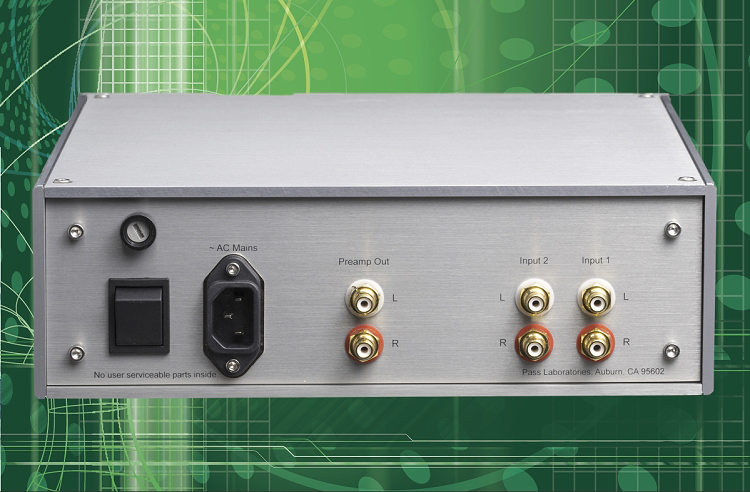 It is very simple, with two pairs of analog RCA inputs, and one pair of analog RCA outputs. The AC connection is three-prong grounded.

The unit is designed to stay powered on all the time. It uses only a small amount of power under this circumstance. If you wish to turn it off when not in use, it takes about an hour for the HPA-1 to come to its full performance. I found this to be so, and if I started listening to the unit before that hour was done, the HPA-1 had a slightly overstated sibilance.

The HPA-1 has a Preamp Out feature that lets you use it strictly as a two-channel preamplifier. This is selected from the front panel, and when it is used this way, the power amplifier output to the headphone jack is turned off.

One might question why Pass Labs did not include a DAC with a USB input that could be used with a computer. I spoke with the designer, Jam Somasundram, and he said that DAC technology is changing so fast that if they included a DAC, it would be obsolete within a year or so. Most consumers already have a DAC which they can update anytime, and the HPA-1 will still be up to date with its totally analog circuitry.

I used the HPA-1 with my reference headphones, which include the OPPO PM-1 and HiFiMAN HE-1000. I fed the input using the analog RCA output from an OPPO BDP-105 universal player in one of my two-channel listening rooms (Lab 3, see below).

One of my favorite albums is Hymn to the Virgin, a 24/352.8 DSD stereo Flac download from 2L in Norway, which was nominated for the Best Engineered Album at the 2013 Grammy Awards. The download page can be seen here.

In this case, I used my reference outboard DAC, the AURALiC VEGA, which decodes music files up to 32/384.

The album is also available on a Blu-ray disc. As far as choral music goes, this album is wonderful, and it sounded that way using the HPA-1 and the stereo version of the music (I also downloaded the 5.1 version for use with my home theater surround sound setup).

Most of the tracks will take your breath away, which is certainly what it did using the HPA-1. It validates Pass Labs’ decision not to put a DAC in the HPA-1, but let the consumer use their own DAC, and the AURALiC VEGA is one fabulous DAC. 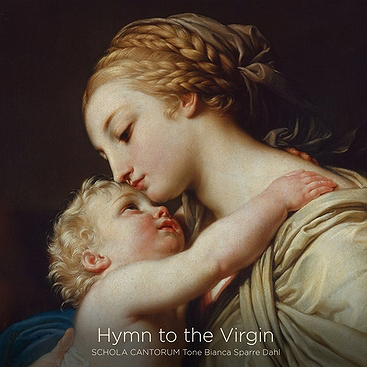 To test the bass response of the HPA-1, I used another download, this one from an old Dorian release of Mussorgsky’s Pictures at an Exhibition . It was performed by Jean Guillou at the Great Organ of the Tonhalle, Zurich, Switzerland.

In particular, track two, “1. Gnomus”, is replete with deep pedal tones, and the HPA-1 did not flinch, even at loud volume (although I only listened at this volume for a few seconds, as it is not good for our hearing to listen to loud sounds for extended lengths of time).

I used the HiFiMAN HE-1000 headphones for this, as they are difficult to drive (they need a more powerful amplifier than most headphones, but they have a fantastic sound, so it is worth shopping for the bigger amp).

So, with the pedal to the metal, the HPA-1 is fully capable of driving any headphones with music that is very demanding. You can go to the link shown above and tick the Listen button, and then hear part of the track I described. 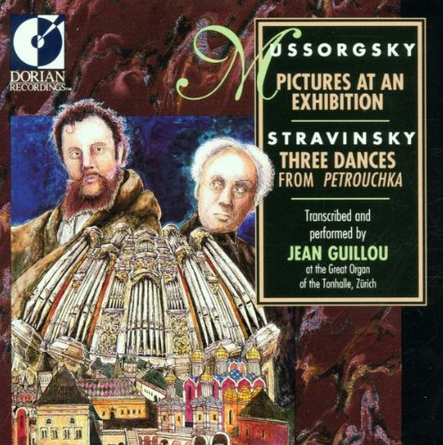 Beethoven’s Piano Concerto No. 5 (Decca 478 3350) is a flourish of virtuosity on the piano that had not been heard by audiences before (in Beethvoven’s time), and the microphones for the piano in this recording were beautifully placed to deliver a terrific stereo effect with headphones.

The HPA-1 delivered in spades, and I thorougly enjoyed this great recording. It gave me goosbumps when the soloist played the famous melody line that anyone interested in classical music is very familiar with. 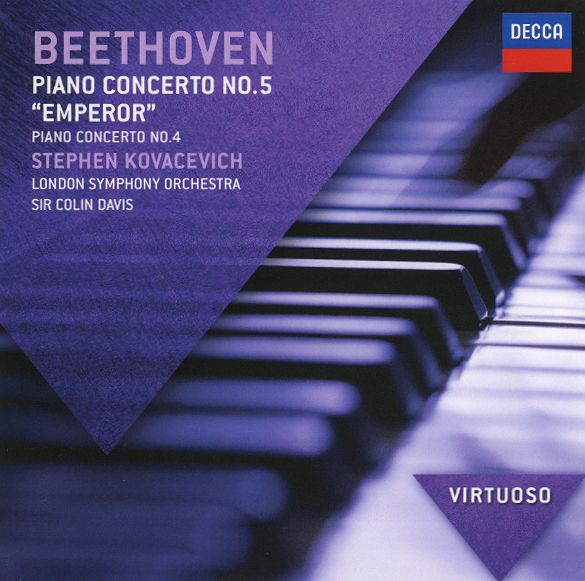 Saint-Saëns’ was famous for many pieces that he composed, and one of them is Symphony No. 3, also called the Organ (Telarc SACD-60634). It is a full orchestral composition that includes the Organ at Symphony Hall, Boston. This particular recording is an SACD remaster of the original 50 khz digital recording.

It is an excellent rendition of Saint-Saëns’ masterpiece, and I heard every nuance with the HPA-1, using the OPPO PM-1 headphones. The low frequency pedal tones are part of why this composition is called the Organ. 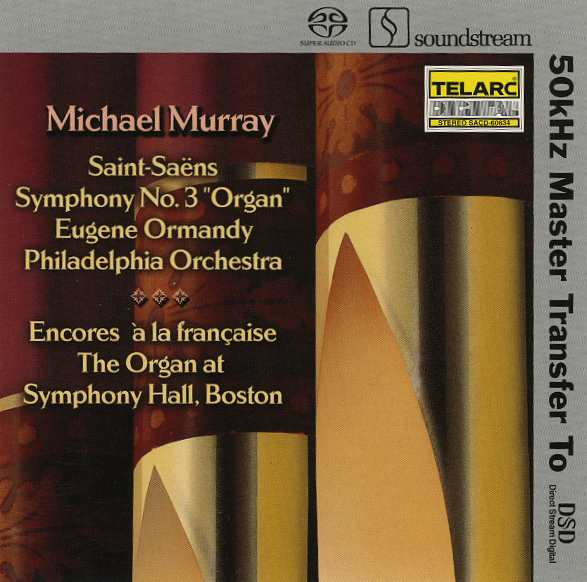 Enya’s latest album, The Humming (Warner Bros. Records ‎– 0825646856305) is an excellent choice not only to test how the HPA-1 reproduces the human voice, but electronic music as well (Enya composes and performs the electronic music herself – she is one talented lady). There is also some terrific deep bass that came through perfectly.

The HPA-1 proved that it does not distort the human voice in any way. 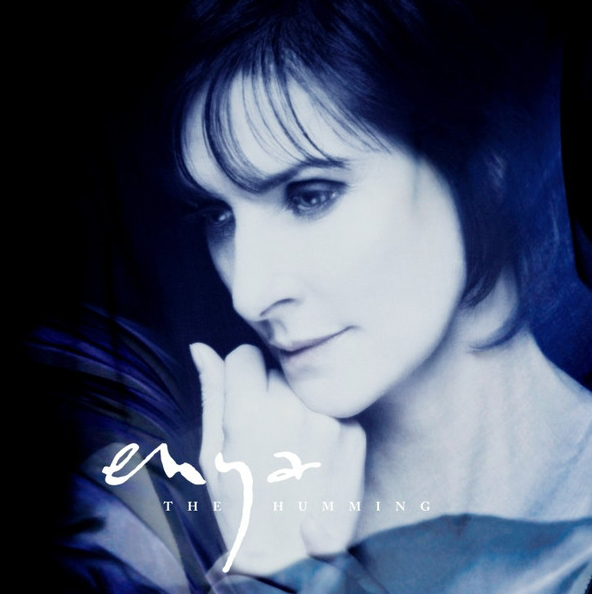 I also connected the BDP-105 in Lab 2 to the HPA-1 and used the preamp output to feed a pair of Pass Labs Xs 300 power amplifiers. I have three BDP-105’s, one in my home theater (Lab 1), one in my two-channel room that has both tube and solid state preamplifiers (Lab 2), and one in a two-channel room with an all-tube preamplifier and power amplifier (Lab 3). The Xs 300 power amplifiers in Lab 2 drive a pair of MartinLogan CLX full-range electrostatic speakers. Here is the list of equipment in all three rooms.

Although the HPA-1 preamplifier was not quite as musical as the Pass Labs Xs preamplifier that is also part of my system in Lab 2, it held its own and had very good detail. It also had very low noise. So, you could comfortably use the HPA-1 in a two-channel system, and have it serve the purpose of the preamplifier for your power amplifier and speakers, as well as a headphone amplifier. You could leave your power amplifiers plugged into the preamp output jacks on the rear panel and your headphones plugged into the headphone jack on the front panel and simply switch between the two from the front.

For the bench test measurements, I used an Audio Precision spectrum analyzer, with an 80 kHz bandwidth for the distortion tests. The load was 39 ohms.

At 1 kHz and 1 volt output, THD+N was 0.005% (exactly on the specification), with only two distortion peaks, one being the second harmonic, at -87 dB and the other being the third harmonic, at -106 dB. This pattern gives the HPA-1 its musicality, with a tube-like distortion pattern.

For the 19 kHz, 20 kHz test, at 1 volt output, there were only two side peaks, one on either side of the fundamental test tones. This is a really fine result.

Intermodulation distortion (IMD) was also very low, at 0.016% and 1 volt output. There were two harmonics of the 7 kHz test tone, one at 14 kHz (second harmonic) and -115 dB, and one at 21 kHz (third harmonic) and -117 dB. Both of these harmonics would be inaudible. The low IMD would give a very detailed sound rather than being muddy.

To produce 1 volt output, the volume control was set at its full position (all the way clock-wise). The result was that 400 mV – 550 mV input was required.

The Frequency Response was superb, being down only 0.1 dB at 200 kHz at both 1 volt as well as 2 volts output.

The Frequency vs. Output indicated that the HPA-1 was capable of outputting 4 volts at clipping (1% THD+N), and its lowest distortion level on the spectrum was 0.0038% with 200 mV output on the spectrum curve. Note that the maximum output will depend on the nominal impedance of your headphones, which varies widely, much more than with speakers. 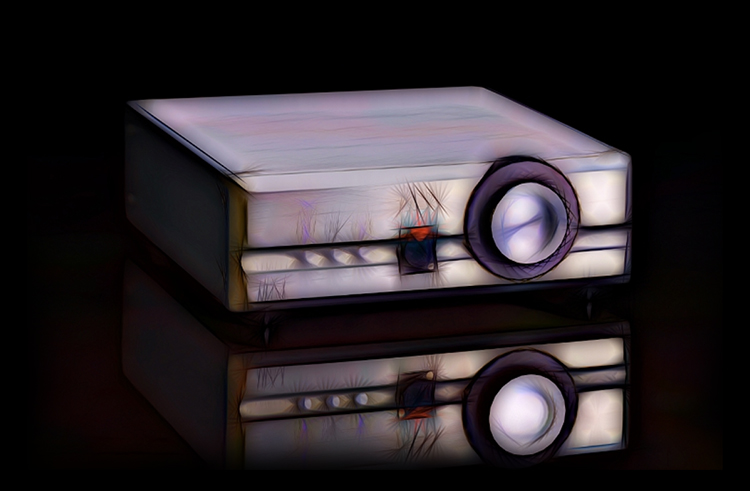 THE PASS LABS HPA-1 is One of the Finest Heaphone Amplifiers on the Market Today.

The Pass Labs HPA-1 is a very fine product. They have remained true to their plan of keeping all circuitry analog. Although I also have a headphone amplifier that includes a Wi-Fi DAC, I was perfectly happy just using the analog input on the HPA-1 because it sounds so good. For use with music on your iPhone or Android phone, all you need is an adapter that has a 1/8” stereo plug on one end and a pair of RCA plugs on the other end. I found an array of choices here.

At over 14 pounds, the HPA-1 is heavy for a solid state headphone amplifier, but typical of Pass Labs products. Their Xs 300 power amplifier monoblock weighs 298 pounds and has a spectacular sound. Now, they add another great item to their lineup.