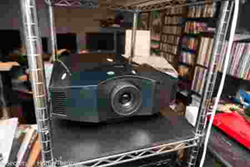 Since I review multiple projectors every year, I do this dance too many. By the time I get a projector perfect it’s almost time to box it up and send it back to the company. The PJT40 projector mount from OmniMount is designed to make this easier than before and so I decided to install one in my home theater to find out.

Unfortunately one rule in my rental house is that I can’t mount anything to the ceiling. So because of this I’m instead mounting the OmniMount to my projector tower using a 2×4 and some rubber grommets to replicate a single stud mounting. It might look a bit different, but the process is the same as installing it to a ceiling joist.

Design and Setup of the OmniMount PJT40 Projector Mount

The PJT40 can hold a projector up to 40 lbs. That will handle every projector I have reviewed and so it should handle yours. With its adjustable mounting arms you can install models with three or four mounting points and the connectors are almost infinitely adjustable. No matter how big or small your projector is the PJT40 should fit it. Adjusting it for a projector is easy with OmniMount’s QuickMount system. You can loosen the mounting points to move them around and then tighten them once they are aligned. Attach it with the included screws and Allen wrench and you are halfway home. 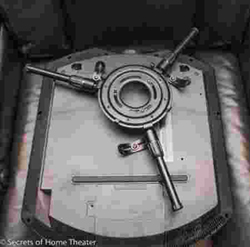 The ceiling mount attaches with two bolts to a single stud. You can secure it at four points if you want to be really sturdy. Once attached to the ceiling you simply screw in the post and adjustable mount, and then secure them with two tiny screws. Attaching this to my fake ceiling joist took 15 minutes total, even with a 1 year old “helping” me out.

The projector then attaches with a small twist and you secure it with three more screws. The design lets you do this solo instead of requiring someone to hold the projector while another person attaches it to the mount. The total time for everything is under an hour. It may take me longer with a real ceiling, but only because of my innate inability to locate a ceiling joist. For someone that is not inept at this you can have it done in an hour. 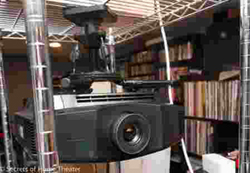 After mounting the Sony VPL-HW55ES projector I can slightly rotate it to get perfect alignment with the screen. I tighten the screws and I no longer worry about being misalignment if I bump the unit. The MicroDial adjustment knobs on the mount let me get the Sony perfectly level and tilt correct. These adjustments take me under 30 seconds with the mount, a big improvement.

Now there are no keystone issues and the image is perfectly aligned with my screen. I can do this without the mount, but it takes longer and it is far easier to throw off the alignment later. If this is actually on the ceiling instead of a stand, my projector is now safe from little kids a instead of being in constant danger. 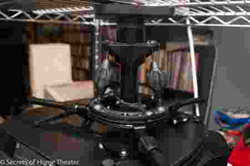 In an hour I have gone from having my projector on a shelf, where it is easy to touch and throw off the alignment, to a secure ceiling mount and perfect screen alignment. I’m not handy with tools or installing things at all, but this is easy for me to do. OmniMount includes everything you need in the box and the construction is top rate. This is how I will mount all my review projectors going forward and I can highly recommend it to anyone looking for a well built, easy to install, and easy to adjust projector mount.