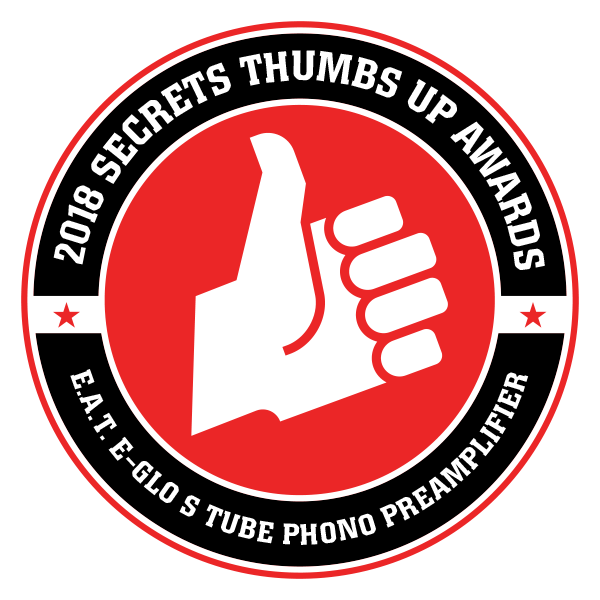 Frankly, I didn’t know much about EAT, (European Audio Team) out of the Czech Republic, founded by Jozefína Lichtenegger and distributed in the U.S. by Vana Ltd. In addition to an extensive line of turntables, tonearms, phono preamplifiers and other things vinyl, they make their own vacuum tubes. That may partially explain the design of the E-Glo S that I have in for review; hybrid phono preamplifier that places twin triode tubes in the two gain stages with low-noise J-FET transistors for the output.

In 2013, EAT introduced the E-Glo, an all-tube phono preamplifier, the frontrunner to the Hybrid E-Glo S. The predecessor sells for about $6,995 while the new “S” hybrid is $2,995.00. The big difference is the outboard power supply for the E-Glo, whereas the E-Glo S is one chassis with an 18V power adaptor. For those concerned about feedback or hum, in reference EAT says; “…advanced power supply that uses anode voltage regulation and a well filtrated voltage. Filtration is in three steps, this result is a perfect S/N ratio…” The RIAA curve is passively equalized. Also gone are independent RCA inputs for MM and MC cartridges leaving just one pair spaced far apart.

Note: Since the beginning of my time with the E-Glo S, I’m told E.A.T. is coming out with the LPS – a dual linear external power supply as an option to the hybrid adding $1,295 for a total of $4,290. When purchased together, there is a savings of $495, bringing the package price down to $3795. 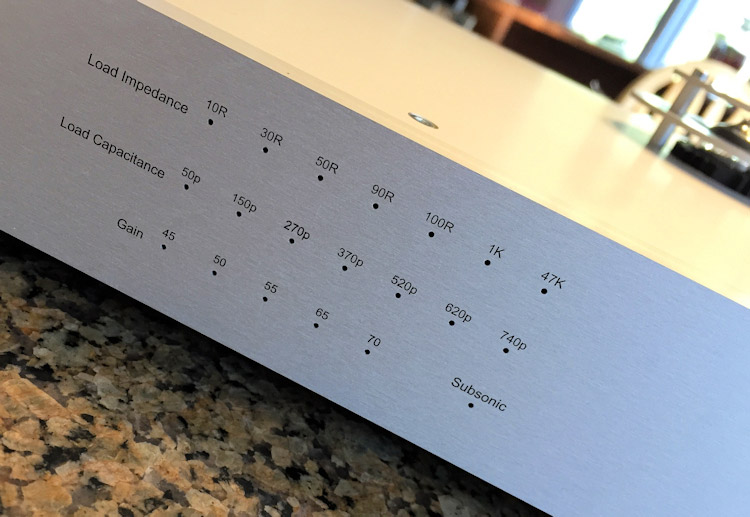 It certainly is beautiful; side panels of high gloss Makassar, (or available with gloss black if you’d prefer) melds with a soft-colored aluminum cover and faceplate, delicately designed toggles on top of the unit and the triode tubes protruding the top, are protected by two aluminum “donut -shaped” disks, which may also act as heat sinks. The tubes are also wrapped in an EAT cooling damper. The E-Glo S is not a stackable component, those delicate tubes and all. 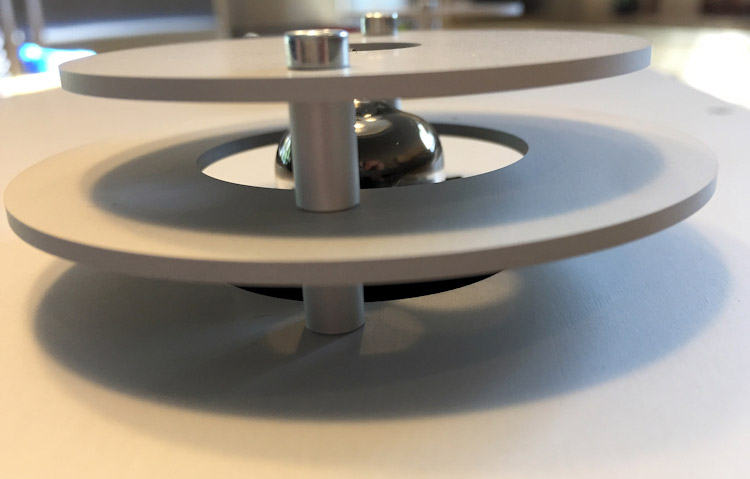 The rear is spartan; right and left gold-plated RCA input/outputs, a grounding screw and hook-up for the power supply.

Changing impedance, load capacity and gain is accomplished easily and quickly using the toggles top-mounted on the chassis, an excellent feature giving the capability to play, especially changing cartridges. Additionally, placed on top are toggles for on/off and a subsonic filter, more on that later.

Taking the lid off, EAT includes everything on a single circuit board that includes the power input along with the phono signal input and right/left channel outputs. The dual gain stages are separated to lower the noise floor. 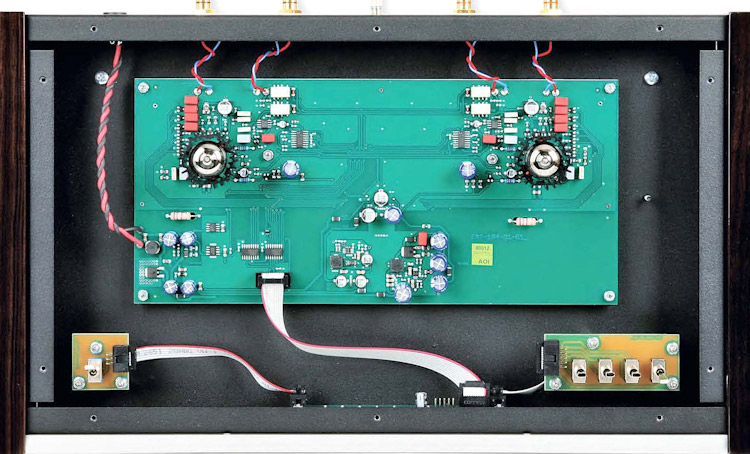 I may have broken a few “cardinal” rules in reviewing the EAT E-Glo S phono preamplifier; I changed speakers and cartridges, that would be one too many variables changed. Nonetheless, it didn’t alter the result of my findings of a truly superior-sounding preamplifier.

Although I predominately used my MM Clearaudio Ebony cartridge, I did swap out for two Sumiko cartridges I have in for review; the (MM) Olympia and the (MC) Songbird, but that will be a future review. I also was not inclined to roll out the tubes but thought it best for this review to keep those already installed in the E-Glo S, upgraded as they are. Besides, I didn’t have anything better on-hand.

The EAT E-Glo S I must say, is just fun to use. I’m impressed immediately by the on-the-fly setup, and simplicity. But getting to serious listening, I thought about clean instruments, John Coltrane’s Blue Train LP is easy to listen to with an easy tempo presented a modest challenge. Although highlighted by Coltrane’s tenor sax, there is so much subtleness in the complimentary instruments; go right to Side B, Locomotion, the opening track features Joe Jones on drums, is quick and weighty, tightly controlled by the Eat preamp. The thwack of the drum skin sounds crisp and taut. It doesn’t take long before Coltrane flares up the sax, brassy and sweet. Kenny Drew on piano sounds full and rich.

I’m a big fan of the big voice of Jonny Hartman; I’m puzzled why he doesn’t get more recognition as a true great American baritone singer. I listened to the 45 rpm version of, I Just Dropped By To Say Hello, features his ability to show deep strength, delicate details and control, the EAT E-Glo S simply nails it! The fine texture in his voice is sumptuous and throaty.

A favorite contemporary album is Beck’s Morning Phase, a bit folk, a bit rock – melodic, melancholy, mellow. The EAT E-Glo S brings out the lushness of the music, the instruments mysteriously slide across the soundstage, especially in the ethereal track, Heart Is A Drum. Yet the delicate acoustic guitar and banjo plucking are clearly delineated on the following track, Say Goodbye. The E-Glo S does this album justice as a modern masterpiece of music, at least IMHO by expressing some rangy dynamics.

Donald Fagen’s, The Nightfly is a must for anyone wanting to show off their system, especially on vinyl. It is a tight and polished recording, but also very rich acoustically, drop the needle on the first track I.G.Y. The speakers light up, the EAT E-Glo S goes to work, so well balanced, so musical, so enjoyable. Excellent tempo and fullness, the EAT preamp expresses the highs cleanly.

The inclusion of a subsonic filter of course begs to be tested, what is it, what’s it for? Hmm, well for example, warped records can cause woofer drivers in the very low frequencies in some speakers, to create unwanted noise. The subsonic filter on the E-Glo S with a slope of 18dB per octave, removes anything below 18dB. Some argue it’s inaudible anyway and others swear by it; cleans up the rest of the frequency chain, while the demand on the amplifier to deliver those lowest frequencies is relieved. I found no discernible difference switching it on and off. 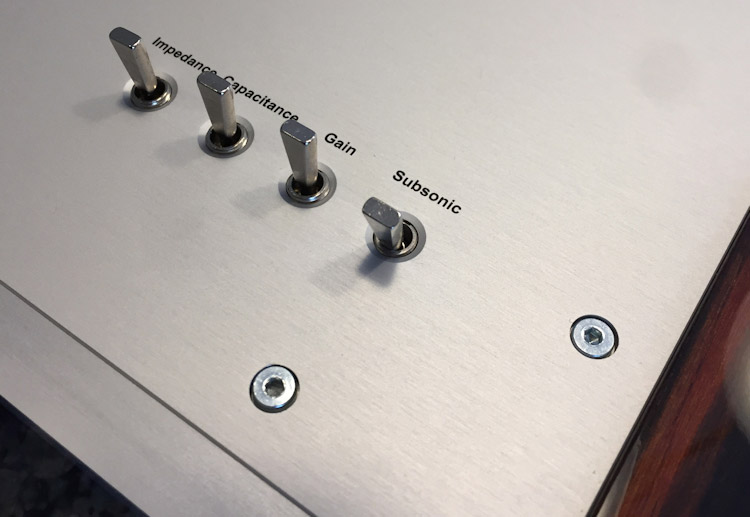 Most sub-$1k phono stages are frankly, simple metal boxes. This is not a glamorous component I suppose, but the EAT E-GLO S elevates the status of the phono preamplifier both visually and in performance. To most, $3,000 for a phono preamplifier may just be too much, given so many products for so much less, even counting the phono stage included in a good quality integrated amplifier or preamplifier. This I will tell you with a straight face, there is a difference sonically that once you hear how greatly the hybrid E-Glo S sounds and elevates your system, you may not think twice about the upgrade and cost.

I can’t imagine a significant difference between the original EAT E-Glo and this new hybrid. But I will say if the pricier E-Glo sounds “better” than the E-Glo S, then I’m intrigued, because the Hybrid unit is thorough across the spectrum. I felt it resolved bass beyond adequate, clean and natural highs and especially finite detail. This is an elevate-your-system kind of product. I highly recommend it.