Introduction to the Parasound Halo A 31 Power Amplifier

Parasound has been making their Halo line of products for quite a few years now, but they are not one to make updates for the sake of change. Their A21 and A51 amplifiers have been unchanged since they debuted and remain a mainstay of most Top Equipment lists that publications put out. They finally have listened to many in the home theater community and put out a matching three-channel amp, the A 31, this year.

Design and Setup of the Parasound Halo A 31 Power Amplifier

Offering the same 250 WPC into 8 ohms and 400 WPC into 4 ohms that the A21 and A 51 do, the A 31 makes an ideal mate for your front three speakers without having to spend money on extra power for surround channels that may not need it. With the balanced inputs it also allows you to keep the amplifier close to the front channels, allowing for shorter, more convenient speaker cable runs and longer runs of the balanced interconnects that are less prone to picking up noise.

Looking at the specifications for the A 31, it is effectively a three-channel version of the Halo A51 amplifier that has been in their line for years. Each channel has the same number output transistors and filter capacitance, though there is a bit larger toroid power transformer in the A 31 on a per-channel basis. Using the same John Curl designed amplifier circuit that is in the A51 is a good thing, as the A51 has been thoroughly analyzed and tested over the years and always has performed well.

The silver front panel of my unit looked quite nice, with a single power button up front for controls, with lights to indicate power and channel status. The rear contains all of the inputs and outputs for the A 31, as well as a set of handles to help you move it into position. Each channel has XLR and RCA inputs, with a switch to change between the two, and an adjustable gain knob. By default it comes at the THX reference level of 28.28 V of output for 1 V of input, but you can adjust this by up to +6 dB per channel to level match amplifiers in your system that might run higher than the THX standard.

A 12V trigger input allows you to set the amplifier to turn on based off the trigger, or it can power on when it sees an input signal, or from the front power switch if you want the manual option. Both sides of the A 31 are covered by large heat sinks to dissipate all of the heat given off by the amplifier, and there is no fan to introduce noise while in operation. Rated for 250 WPC into 8 ohms, and 400 WPC into 4 ohms, the first 5 watts of the Halo A 31 are actually Class A before it crosses over into Class AB. With most listening actually taking place at 5 watts or less, this offers sonic benefits to the user with lower distortion and odd-order harmonics.

I used the unbalanced RCA inputs with my Marantz AV7005 processor, and the 12V trigger input for controlling power. The 12V trigger out was used for an Emotiva UPA-5 to power the surround channels.

The Parasound Halo A 31 Power Amplifier In Use

Ideally an amplifier should reach out and grab your speakers tight, exerting full control over them at all times. A well-designed amplifier should perform like the most ideal car, able to start and stop instantly, take a 90-degree turn without slowing down, and be able to keep the accelerator pressed to the floor without worrying about damaging the engine.

From the time I plugged it in until I wrote this review, the A 31 grabbed my speakers by their throat and never let go. Listening to all my favorite music cuts and films, the A 31 never hiccups or backs off, and even driven to the limits that I could provide the case was never hot to the touch. On the SACD version of Wish You Were Herethe front soundstage was huge and dynamic, with guitars coming across clear and natural, with smaller details remaining clear and not obscured. Bass notes were clear, fast, and tight, as the A 31 never lost control and allowed the bass to turn muddy and fat.

On Simon and Garfunkel’s iconic Bridge Over Troubled Water, the soundstage thrown by the A 31 was very wide and deep, more so than the Emotiva could manage. The location of the instruments and vocals were precise, and their vocal harmonies sound fantastic. Melodies were smooth and clear and the treble isn’t fatiguing at all, but a pleasure to listen to.

The Mobile Fidelity version of Sea Change from Beck continues to be my reference CD recording, with clarity and detail I find unsurpassed. Though the A 31 the heartache of his voice was palpable, with words lingering on his tongue and in the air. Accompanying instruments effortlessly floated in the air around his voice, which anchored between the speakers but well behind them. Delicate acoustical instruments sound crisp and clear, with each note distinct and clean. The power of the A 31 might be overkill for a laid back album like this, but it certainly hasn’t sounded much better. The A 31 amplified everything in the music: backgrounds were blacker, instruments had more space around them and notes were better defined. It took the quality I had and stepped it up another notch.

To make sure the A 31 could keep up with whatever I gave it, I went back to “One”, from Metallica’s …and Justice for All album. The rapid-fire drums in the middle of the track have always proven to be a challenge at loud volumes, demanding a continuous attack and release by the amplifier to keep up with the accompanying guitar. With both pairs of speakers I had on hand, I didn’t hear the bass get muddy, or had a timing disconnect develop between the bass and the guitars.

Films proved to be no challenge for the A 31 either. Dave Matthews and Tim Reynolds sounded wonderful on stage, while the mid-air crash in Fight Club attacked me from the front speakers with reckless abandon.Even Nine Inch Nails didn’t cause the A 31 to blink as the industrial riffs from Trent Reznor blared from the speakers. With all material I pulled out, the A 31 performed wonderfully and didn’t leave me missing anything. I refrain from

The Parasound Halo A 31 Power Amplifier On The Bench

When put onto the test bench, the A 31 performed up to its rated specifications on all the tests I could subject it to. 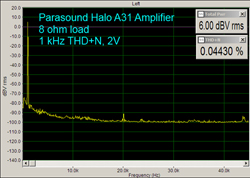 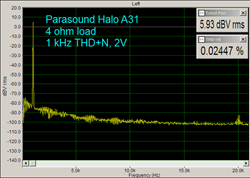 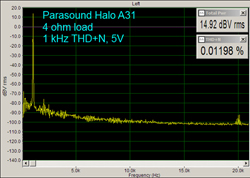 Rated at <0.2% THD+N, the A 31 outperformed that for both 4 ohm and 8 ohm loads. There was over 85dB of headroom on the tests, and no noticeable artifacts from any of the tests. 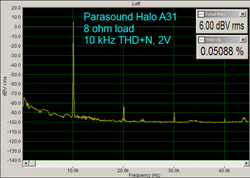 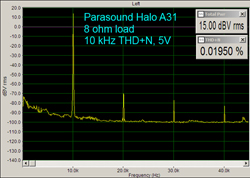 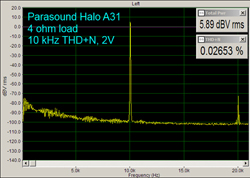 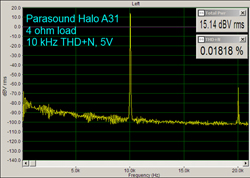 With 10 kHz there were artifacts at the odd and even fundamentals, though they were 75 or 85dB below the primary and outside of the audible spectrum. THD+N numbers were still well below the rated numbers from Parasound. 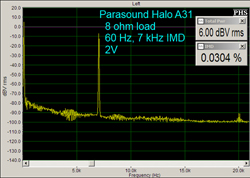 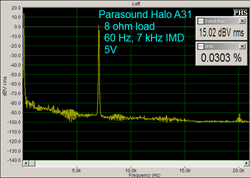 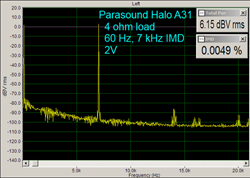 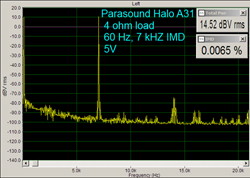 IM Distortion was specified at 0.04% but scored 0.03% or better on the testing. Looking to the sides of the 7 kHz tone you can’t see any artifacts and the noise floor is very low. 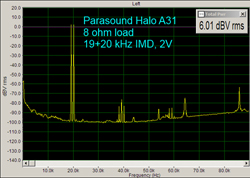 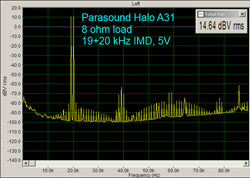 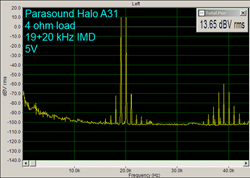 With 19 kHz and 20 kHz tones we see almost no artifacts on the 2V tests, but we do see some begin to develop on the 5V tests but they are still close to 90 dB below the main tones. There are small artifacts out in the non-audible spectrum as well, and a slow rise in the noise floor out to 95 kHz. 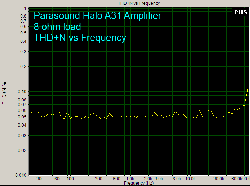 Looking at THD+N vs. Frequency, we see that THD+N stays right by 0.05% out until almost 50 kHz where it begins to rise. 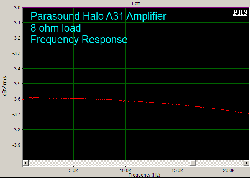 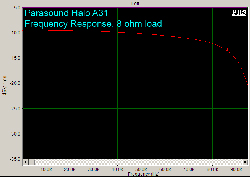 Looking all the way out to 95 kHz we see there is a gradual roll-off in frequency response that accelerates around 60 kHz.

Overall the bench tests on the A 31 indicate very good objective performance, with no clearly visible flaws that would need to be addressed, and numbers that surpass their own specifications.

Conclusions about the Parasound Halo A 31 Power Amplifier

The A 31is a superb amplifier during my time with it. Impeccable in fit and finish, meeting all its specifications on our bench tests, and handling all the material I threw at it with no issue. The A 31 is powerful but refined, presenting a large, detailed soundstage and bringing out all the details in the recordings that I listened to. Movies that used the fronts and center had no issues pushing the speakers to reference level without losing control or leaving the bass muddled and slow.

Really this review was a challenge to write. Amplifiers don’t have an interface or user experience where I can complain about the interface, or a large number of controls that can be too complex to setup. When an amplifier works, it should become invisible to the user and just do its job without getting in the way. By staying out of the way and letting me enjoy the music, the A 31 made this review a challenge to find new ways to say that it sounded wonderful.

The only faults I found with the A 31 were the lack of a black finish finish, which has been remedied by a new finish that Parasound is releasing now, and the bright lights on the front of the unit. As many three-channel amps will be placed at the front of the theater, it is nice to be able to disable all the lights on them so they don’t distract from your movie experience, but with the Halo you have to cover them with tape to do so. Beyond these two cosmetic issues, I found nothing to complain about with the performance of the A 31. In fact, it performed so well I let Parasound know I’ll be paying for it and keeping it as my reference amp going forward.

The Halo A 31 is able to drive any speaker you are going to throw at it and not complain, as well as impeccably built and beautiful in appearance. The Halo A 31 is a wonderful amplifier and a product I imagine will remain in the Halo catalog for a long time to come.