Digital audio room correction is nothing new of course yet researchers from Uppsala University in Sweden have developed their own. Dirac Research was founded in 2001 and has not only applied their technology in the automotive world working with the likes of BMW, Rolls Royce, and Bentley, but also with digital theaters and now home audio equipment.

Dirac Technologies includes Dirac HD Sound™ which is a speaker correction technology that uses a “near-anechoic” environment to “optimize the speaker’s overall acoustic behavior through real-time digital control”. Dirac also developed Dimensions™ which has been applied to the automotive environment, said to “alter the acoustic sound field” allowing for creative placement of speakers unique to a car’s interior.

I had the opportunity to listen to the third technology called Dirac Live® which is geared towards the listening space and more specific to the high end computer audiophile. With the new realm of audio playback from high resolution digital sources Dirac Live® supports 96KHz/24 bit files in both Windows and Mac operating systems.

Live® sets out to correct room deficiencies by measuring and correcting both frequency and impulse responses and applying a “proprietary filter structure”. I’ve included some room correction images below so you can see both the frequency and impulse corrections. There is technically so much more to Dirac than my simple comprehension, but I’d be glad to pass on their white papers to anyone interested.

I was introduced to Research Engineer Mattias Arlbrandt and Christoffer Ahlén, the Marketting Director who walked me through the system. Using a USB microphone and a Live® calibration tool and audio processor, the process is no different than most room corrections.

Test signals are sent and measurements are taken from as many positions as you’d like but at least nine. Software then analyzes and suggests a target curve response, although the user can make any adjustment to the suggested curve. Models are written and stored for calling back anytime through the playback. The software in action was amazingly user-friendly and even I understood it which prompted Chris to respond favorably as their goal was to make it as simple as possible; difficult in itself.

This screenshot shows the frequency response for both channels in light grey. The software suggests a response curve which through adding and subtracting nodes, can be altered. 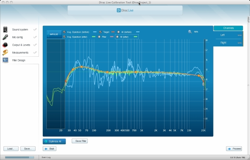 This screenshot shows the applied correction with the yellow lines. Note that below about 25 Hz, the graph is darker blue. There is no frequency response measured, what you see is “room noise”.

You can see that the impluse response was off about 16 ms which it corrected.

The results were not night and day but rather sophisticated in the end. What seemed like congestion and flat lifeless music through bookshelf speakers without Dirac Live® activated became clear and cohesive. What sounded terribly harsh (think of really bad computer speakers trying to play too loud) without the correction became delineated and voices sounded natural. And yes, bass was fuller and present, in fact non-existent without Live® active.

I’m sure you will hear more from Dirac very soon; room correction keeps getting better and better!