The Panasonic PT-AX200U is a three-panel LCD projector with 720p resolution. Although 720p is not as high a resolution as 1080i (converts to 1080p by the projector), the difference is minimal depending on how large your screen is and how far away you sit. So, if you can’t afford to go all the way to a native 1920×1080 projector, this is a good choice, especially because you can get it for less than $1,700 at ProjectorPeople, and this price includes a screen, ceiling mount, and cable (if you want just the projector, it’s $1,299). I have always liked Panasonic’s projector designs, and the PT-AX200U continues my pleasure.

It’s a very light projector, as most of them are these days, and along with the fact that it has vertical and horizontal lens shift, it would be very easy to set up. The 200 is rated at 2,000 lumens output and 6,000:1 ANSI contrast, but as we all know from past reviews of various projectors, the final calibrated brightness and contrast tend to be somewhat less than the specs.

The rear panel has all the necessary connections, including two HDMI jacks, which is the connection you probably will be using. If you have to use component video, don’t worry, because component is still an excellent signal.

Click on the various photos to enlarge them, then click them again to reduce them. You can move the enlarged photos out of the way to read text.

The remote control is typical: small with just the buttons we need. I am amused that manufacturers have the projector remotes truly under control, but are still having problems giving us good remotes for other products.

The only thing I don’t like here is the AC power socket. Of course, a power cord comes with the projector, but it would be nice if projector AC sockets were the same as our PCs and other components, so that if you wanted to use an after-market power cord, or just replace it with a longer one, you could.

I found the 200 to be a simple projector to set up, and the menu structure is a snap, with plenty of options.

Here are some screen shots of the menu. The first one is the Picture Control, which includes contrast, brightness, and the other ususal suspects. 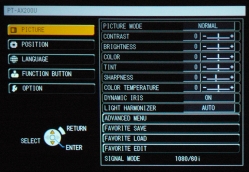 The second menu is Position, for adjusting the image position electronically, such as keystone correction. Remember, the lens shift is a mechanical adjustment. 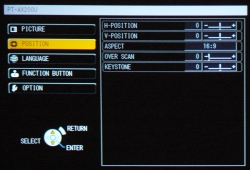 This menu has the various Picture modes, such as Dynamic, and several Cinema modes. I would suggest using Normal or Natural, and then calibrating it from there, which is what I did. 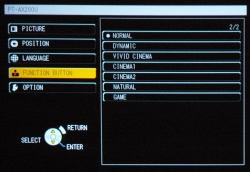 Here are shown the Installation Options. 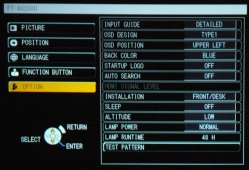 The Advanced Menu lets you adjust the gamma, contrast, and brightness of each primary color. What this means is more control over the gray scale response, as the RGB levels at the low end of the IRE scale can be adjusted independently from the RGB at the high IRE levels. 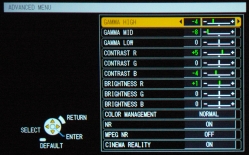 And, RGB, uncalibrated. Too much blue, not enough red.

After calibration, the Color Temperature and RGB are much better, but the gamma was actually a bit worse. I tried adjusting the gamma in the projector menu, but it made the RGB response worse, so I decided to maximize the RGB and let the gamma fall where it may.

At $1,699 street price – which includes a screen, ceiling mount, and cable – and if you are on a budget but want a very nice projector, here is one to consider. It looks fine out of the box, but I think all consumers should get some sort of calibration kit – such as from Datacolor or GretagMacbeth – to get the best possible performance. You can use these systems to calibrate flat panel monitors, rear projection TVs, and by putting the sensor on a tripod, you can calibrate your projector too. Bite the bullet and get one.