Introduction to the Onkyo LS-B50 Soundbar

The “soundbar” business must be booming, or at least manufacturers are banking on it doing so, as just about everyone has come out with one if not several offerings. The gambit seems logical: jam a bunch of audio transducers into an enclosure which tucks in under the typical display panel, usually with a separate small subwoofer, offering better-than-built-in sound. Onkyo is a big name in consumer AV, best known perhaps for their much lauded Surround Sound Receivers. The subject of the current review is their latest take on this mass market soundbar segment: The LS-B50, part of their “EnvisionCinema” line of products.

No one can claim a unique offering as such. While getting the bare basics of audio fidelity right should be a matter of course, a sizeable appeal for the target market is something which “just plain works” out of the box.

Onkyo is a big name in consumer AV, best known perhaps for their much lauded Surround Sound Receivers. The subject of the current review is their latest take on this mass market soundbar segment: The LS-B50, part of their “EnvisionCinema” line of products.

Design and Setup of the Onkyo LS-B50 Soundbar

The system was packed well, and the box was easy to get into and unpack (assuming one notices the “open here” labels on the fat end of the carton). Out slides an open-face box with the bar itself encased in good quality #6 expanded styrene (not the cheap kind which flakes apart and leaves you finding little white bits everywhere for a week!). The woofer unit came strapped between two more such pieces.

The main unit is a curious piece of gear in terms of its transducer arrangement. Working from the outside in, each half gets a pair of 2.75″ midranges and what looks like a coaxial midrange/tweeter but which in reality is an unorthodox 1″ ring tweeter. Additionally, the ends of the bar each have an additional 2.75″ midrange firing sideways. The drivers are all covered in a rigid metal grille, something that I appreciate more than most, since our cat has something of a penchant for cloth speaker grilles! On top there are buttons for power (which doubles as the input selector), volume +/-, and sound “mode” (which we’ll delve into later). On the back, in addition to the power jack of course, we find in a blessedly decent spaced recess Optical Digital and Coax inputs, a 1/8″ stereo analogue input In a separate recess are a single USB port and an IR blaster jack. This last can be used with the included IR emitter: if the soundbar blocks the IR remote control receiver on your TV, the Onkyo will pass along anything that its receiver picks up. Wall-mount hardware per-sé is not supplied since keyholes are built-in (a decent sized screw appropriate for your wall material should be all you need).

Onkyo claims a frequency response of 120 Hz -20 kHz, which is meaningful only in that it suggests a nominal crossover frequency to the woofer module of 120 Hz. Amplification power is not discussed, but the wall wart specifies 21VDC/17watts, which means even with switching amplification, the output will be low.

The woofer unit is characteristic of these types of products: a diminutive cube with a single bottom mounted 6.5″ woofer next to an associated reflex port. Being of the wireless design, there is no umbilical connection to the sound bar, leaving us with just the power cord and a “link” button. Onkyo claims a 20 Hz-120 Hz frequency response which seems a bit of a stretch given the diminutive size of the woofer. 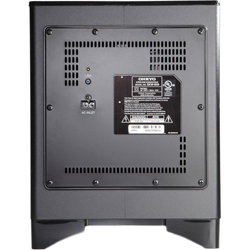 Setup was a snap…I mean, this is by a wide margin the easiest deployment I have ever done. The “hardest” part was screwing the included feet to the sound bar. After setting it on our cabinet in front of our living room TV, I connected its power cord and used the included Toslink optical cable to connect our Motorola HD box. Likewise, the woofer unit’s power cord got plugged in, and I was done.

The Onkyo LS-B50 Soundbar In Use

The supplied remote is of the ubiquitous miniature type. The buttons were mushy, lacking a positive feel, and we were forever losing it between the cushions. Facilities include power, mute, volume +/-, woofer level +/-, input selection, and play/pause/Fwd/Rwd (USB device control). In an unusual twist from the norm, the power button does NOT turn the unit on, only off. To turn it on you press one of the input buttons.

Of course in order for any such system to live up to its “simple to use” promise, it would have been better not to have to deal with a remote control at all.

The unit will respond to the remote codes of the top nine brands of TVs. At first this seems like genius: our incumbent remote did in fact change the volume on the Onkyo. Unfortunately it also continued to change the volume on the TV’s built in speakers, resulting in both voicing sound. This not only disturbs the attempt at audio fidelity, but introduces a nasty echo into the room (as the onkyo’s sound is substantially delayed by its DSP). This may not be the case for all TVs in that some will have an option to simply disable their built-in speakers altogether, but in my experience, that’s the exception, not the rule, so the feature was useless in my situation. 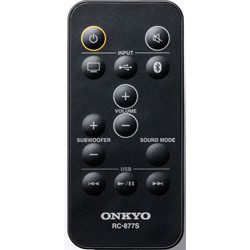 That detail aside, the system’s function is pretty straight-forward. It’s worth noting that the Optical, Coax, and analog inputs are really one, the idea being that you will only use one of them to connect your TV (or primary cable box): With a digital source connected, the analog input is mute.

Pairing the Onkyo to our iPad Air via Bluetooth was simple and trouble free, though the audio quality was what one would expect from a unit with a 6.5″ woofer. We did use the feature, but for quiet background music only.

These days, virtually everything outside of the most basic receiver and speaker arrangements employ DSP (Digital Signal Processing), in many cases by necessity. Without it, it would be next to impossible for speaker systems like sounds bars, and their accompanying woofer units, to achieve anything resembling a decent output, particularly given the austere amplifier power available. Instead of simply targeting a traditional, neutral and balanced stereo output, Onkyo employs what they call AuraSphere “Panoramic 3D Sound”. You are forced to choose between three settings, colloquially labelled “Music”, “News”, and “Movie”. .

Each mode is radically different from the others, thanks to both the nature of the EQ applied, but moreover in their use of the “side” drivers versus the front ones. None of the choices presented deliver what I would consider a high-fidelity output. It is of course impossible to know what Onkyo is doing under the hood but my ears break it down as follows:

Music – This mode seems to deliver a fairly in-your-face sound. The audio content from the sides is identical to the main channels with some sort of shaping applied. While tolerable for its namesake, any other material just sounded wrong on this setting.

News – Clearly some sort of steep band-pass filter is applied here, almost sounds like people are talking through a paper cup compared to the previous mode. The side drivers are not used at all. Indeed it omits the boomy sound which is a consequence of boosting the upper bass, though in my mind if the system has a balanced, neutral output to begin with you never have the issue to address in the first place. Movies – Of the three this is the one we ended up using the most, not because it was particularly pleasing, but because it was the best among the three choices. As with the music mode, the side drivers simply duplicated the fronts in terms of content, but in this mode, seemed shaped with a treble bias.

It should be noted that there is no evidence of pseudo-surround. I had thought the side firing drivers might deliver the surround channel of a 5.1 (or matrix encoded 2.0) source (if done out of phase it can produce a vague facsimile of surround sound if you are seated just so), but that is not the case. By all accounts everything is downmixed to 2 channel and the side drivers are simply eq’ed copies of their respective front channel.

Bass response in all modes was fairly boomy, with a noted punch in the upper bass and usable in-room response of no lower than 40 Hz or so. Hitting the ceiling of the systems output was not too hard to do, with the characteristic harshness which sets in.

On the whole perhaps most telling is that my wife never used the Onkyo when watching TV, it just wasn’t enough of an improvement for her to bother turning it on and having to use two remotes. I’d also be remiss if I didn’t mention our sample was very temperamental in terms of turning on: sometimes it would, but all too often it required unplugging and reconnecting the power cord to get it to work.

Conclusions about the Onkyo LS-B50 Soundbar

Soundbars aren’t for everyone. Simple physics dictate that they cannot match the fidelity of even the most basic traditional stereo speaker arrangements. Conversely, nothing out there can match their ability to blend in visually, or their ease of setup. The wireless woofer alone is a deal maker for some.

It comes down to what you want for a given installation. The greater value may lie less in it being an instant home theater and more in it doing double duty as both an upgrade for the TV’s built-in speakers as well as a better than typical dock for your iPad/Phone. If however you buy into the hype that it will provide “3D sound” and fill your living room with high fidelity audio, you will be sorely disappointed.

If your TV speakers are particularly poor, upgrading them with this set will certainly help and you’ll get a background music device to pair with your Bluetooth enabled source, but those seeking satisfactory hi-fi in a soundbar are advised to look elsewhere.