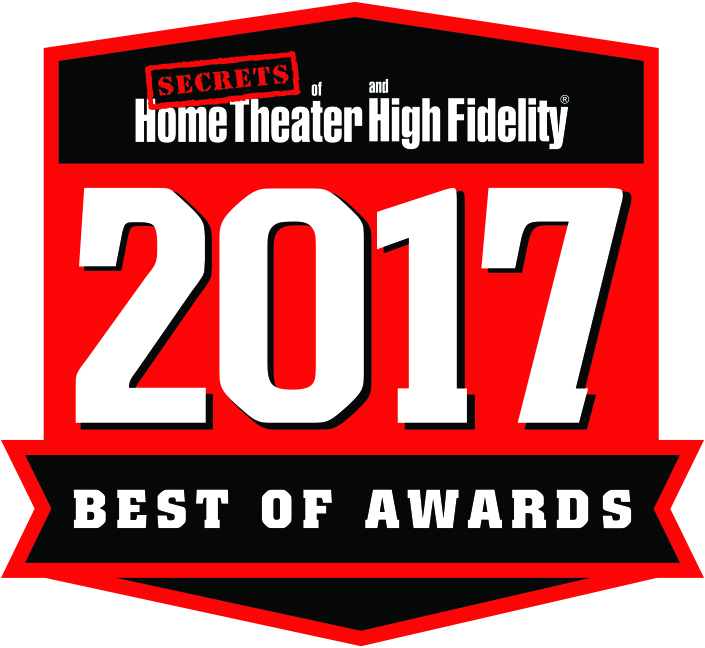 It looks very unassuming, this shallow black component sitting next to my workstation, with headphones tethered in readiness.

It doesn’t have any of the cool lights or fancy displays of some of the other headphone amplifiers that I’ve seen on the market. The Bryston BHA-1 is nothing, however, if not purposeful as it is simply designed to power your headphones, that’s all. And as a completely analog animal, it does that simple feat rather beautifully.

Bryston is one of the few smaller high-end audio companies that has an established presence in both the pro-audio and home hi-fi worlds. Truth be told, they very much cut their teeth in the pro audio area, with powerful, solidly built amplifiers that were made to withstand the rigors of constant touring. They make no bones about the fact that they engineer their product to last a good, long time. And while they do regularly refine and update the products in the overall line, they don’t tend to have multiple "flavors" of the same item targeted to some little niche of the market.

Each item is considered to be a statement in its category. Case in point, the BHA-1 Headphone Amplifier. It is the only headphone amp that Bryston makes. It doesn’t have a built-in DAC, it doesn’t have gobs of pre-amplifier inputs (although it can work as a basic pre-amp in a pinch). It doesn’t have warm glowing tubes that imbue the resultant sound with hints of honeysuckle and ambrosia. What it does do is cleanly and potently power practically any non-electrostatic headphone of almost any sensitivity or impedance without imposing any sonic coloration of its own. Subjectively speaking, it’s as close to a straight-wire-with-a-gain for your headphones that I have come across.

As is the norm with most Bryston gear that I have come across over the years, the design of the BHA-1 is simple, clean and purposeful without any extraneous glitz. The front panel on my review sample sports a thick anodized black aluminum faceplate with silver being the other color option that is available. If we begin at the far left of the front faceplate, the "switch-ery, knob-ery, and connect-ery" are as follows: first, is a mini-toggle switch that selects your source input from either balanced XLR, unbalanced RCA, or stereo 3.5 mm jacks in the rear. To the right of that is another mini-toggle switch that selects between high (20 dB) and low (14 dB) amplifier gain. Next to that is the volume control featuring a potentiometer that is sourced from Noble and is laser trimmed. Beside the volume control is a smaller knob that controls the Left and Right balance which is a rare sight on headphone amplifiers these days. We now come to the bank of headphone outputs that are comprised of a ¼" headphone jack followed by a pair of Left and Right 3-pin XLR jacks and finally, a stereo 4-pin XLR jack. To the right of these are the main power LED and the mini-toggle switch that controls the main power. 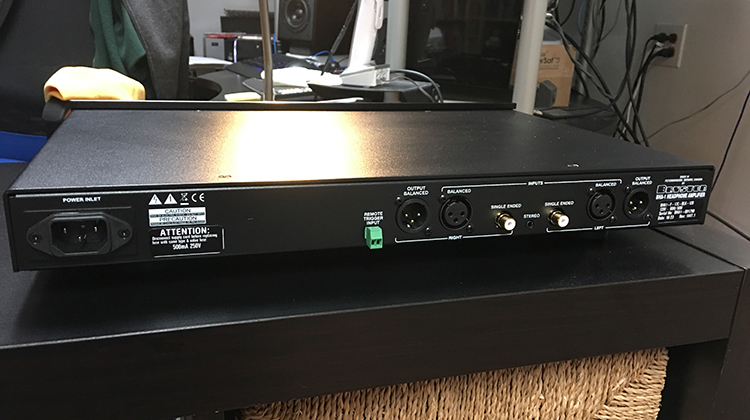 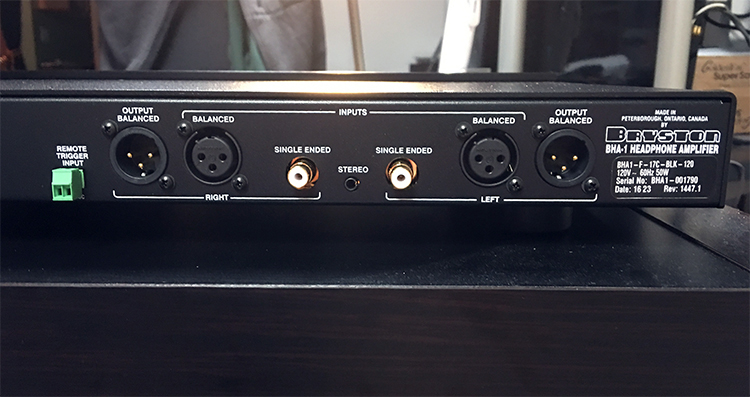 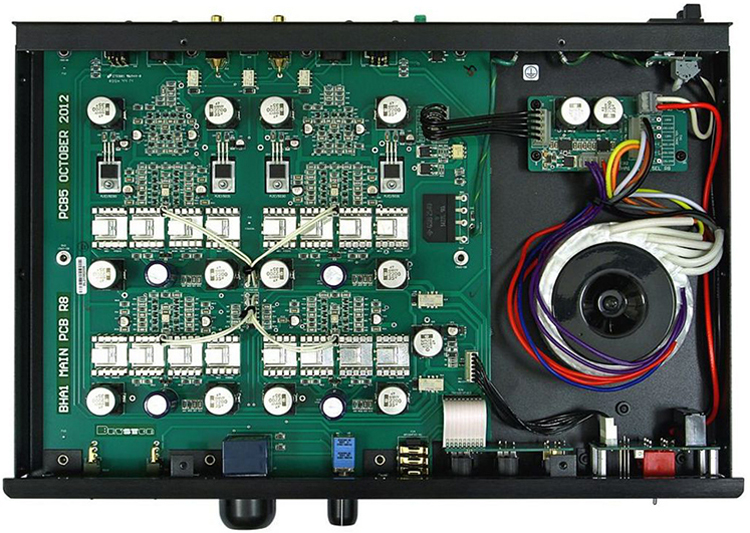 Around back are the aforementioned balanced XLR, unbalanced RCA, and stereo 3.5 mm input connectors. There is also a pair of balanced XLR outputs so that the BHA-1 can do double duty as a basic stereo pre-amp. And to round it off, Bryston also provides a remote 12 Volt DC input trigger as well.

As an amplifier, the BHA-1’s circuitry is fully discrete and it is a balanced, dual mono Class A design.

For my testing, I had the BHA-1 set up by my computer workstation. My computer’s audio output was fed to the asynchronous USB input of my OPPO HA-1 headphone amp/DAC. I then ran a fixed line output from the DAC via balanced XLR cables to the balanced inputs of the Bryston. Music was served up using J. River Media Center software via ASIO drivers to the OPPO USB DAC. I listened with a variety of different headphones with various sensitivities. These included the HiFiMAN Edition X, Beyerdynamic DT-880 PRO (250 ohm) and the NuForce Primo 8 IEMs.

From a usability standpoint, it doesn’t get much simpler than the Bryston BHA-1. Plug in your headphone of choice to the output of choice (balanced and single-ended connections both sound equally good with this unit, so no arguments please), select the appropriate gain level, turn up the volume and away you go.

In terms of the sound quality afforded to me by the BHA-1, it was spotless as far as I could tell. There was no additional warmth or other type of coloration that made itself apparent throughout my listening. More than any other headphone amplifier that I have used in the past, I felt that this one allowed each headphone I wore to speak in its clearest most unadulterated voice. Over my time with it, I began to notice more of the distinct characteristics in each set of cans that I plugged in, even with headphones that don’t necessarily need a headphone amplifier. For example, it made me appreciate how versatile my OPPO PM-3 headphones truly are. They are my go-to travel and walk-around headgear because they sound great through my iPhone, but plugging them into the BHA-1 reminded me how good they could be for more "serious" at home listening as well. My Beyerdynamic DT-880 PROs, which are slightly more demanding to drive and are not noteworthy for their bass levels, gained some particular assistance in the lower octaves courtesy of the Bryston’s power and I found myself using them more because of it. With the gain switch set to High, they still maintained the clarity that I appreciated in the treble and mids, but now with a little more punch at the bottom end. My NuForce Primo 8 IEMs which have been sensitive enough to pick up noise in one or two other headphone amplifiers that I’ve used in the past, found the Bryston BHA-1 to be scrupulously silent in that regard. In its use with my computer setup, I found that the BHA-1 mated quite well with the DAC section of my OPPO HA-1 and I felt that I got just a little cleaner and clearer presentation from the Bryston over the OPPO’s warmer sounding head amp section. It also worked really well inserted in my studio 2 channel rig for a short stint, providing a welcome upgrade in sound over the onboard headphone jack in my own Bryston BP-25 preamplifier, now almost 20 years old. As the BHA-1 is a Class A amplifier design, it’s casing did get warm to the touch after about an hour but it never once got close to being unreasonably hot.

Ultimately, I think it’s fair to say that if you already have a DAC or source component that you really like, the BHA-1 will give you exactly what you put into it, leaving your headphones the enviable task of measuring up. Some of the music that stood out during my listening sessions are: 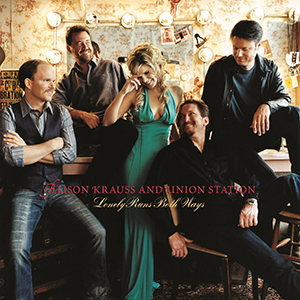 Lonely Runs Both Ways by Alison Krauss and Union Station on Rounder Records. A wonderful set of bluegrass compositions for this group’s sixth studio album. There is a lovely sense of spaciousness that comes across throughout the album which is enhanced by Krauss’ sweet and mellow vocals on many of the tracks.

Contrast this with the biting sounds of Jerry Douglas’s virtuoso dobro work and Ron Block’s banjo playing, along with Dan Tyminski on guitar, and you have a great set of diverse textures to try to reproduce faithfully. The HiFiMan Edition X and the Bryston BHA-1 proved to be an excellent combination for this music. The BHA-1 provided the clean foundation of reproduction, ensuring that all the details were there for the Edition X to do their open-back soundscape voodoo. The Edition X are efficient enough to not need a head amp at all but having plenty of distortion-free power on tap is good for any headphone to perform at its best, regardless of efficiency. In this case, it would have been easy to over-drive the HiFiMANs, but if you take care with the volume, you’ll be just fine. Switching to closed back cans with these songs, I found the detail, clarity and balance to still be consistently there, but with just a smaller soundstage afforded by the differing headphone design. Either way sounded good but, the Bryston’s party trick of getting out of the way and letting the headphones become the ultimate sonic arbiter was very obvious here. 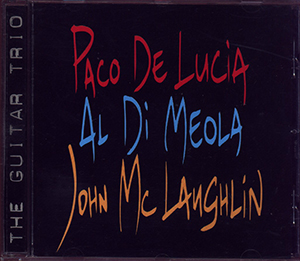 The Guitar Trio by Paco De Lucia, Al Di Meola and John McLaughlin on Verve Records. These three famously talented guitar players flaunt their chops here in a Jazz-Flamenco tour-de-force. My Blue Lola headphones and the Bryston came to be a very sympathetic pairing for listening to this album. Again, the BHA-1 provided the ample power reserves and kept the sonic editorialization strictly to the Lolas.

Their slightly more relaxed top end and lower midrange punch helped give the three acoustic guitars a little more weight in the lower strings and made for an easy, extended overall listening experience. Little details in the strings, hand slaps on the guitar body and background percussion sounds still came through cleanly and with proper sonic perspective. Spatially speaking, each of the players took a distinct left, center and right position and the BHA-1 helped make that easily discernable regardless of what set of headphones I was using. 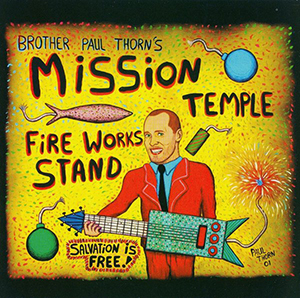 Paul Thorn Mission Temple Fireworks Stand on Perpetual Obscurity Records. The third album for this Southern Rock and Americana singer/songwriter. The BHA-1 definitely proved it could rock out the driving rhythms on all of these tracks and my OPPO PM-3 headphones showed themselves to be the perfect foil for this listening session.

The BHA-1 provided plenty of power to keep the basslines and kick drums sounding impactful throughout all the songs and Paul Thorn’s gravelly voice came through sounding very weighty and detailed as well. On the track, Even Heroes Die, a slower paced almost mournful song, Thorn’s voice is framed only by a piano for much of it and what is striking, beyond the excellent playing and singing, is how silent and noise free the background is during those passages. Not something you would particularly notice on anything other than classical or jazz music, but regardless of what you may be listening to, it’s nice to know that the Bryston BHA-1 will give you a completely noiseless background for it. 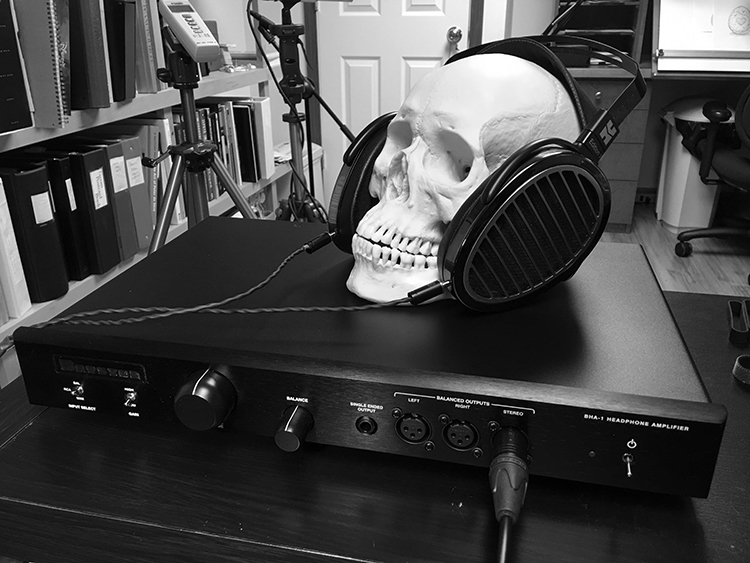 THE BRYSTON BHA-1 is a Quality Piece of Gear That You Could Pass on to Another Generation.

The Bryston BHA-1 is an impeccably designed and solidly built amplification device for speakers that you just happen to wear on your head. It has a fastidiously clean and neutral sound quality with an abundance of power and connectivity options that will allow almost any headphone to shine on its own merits, or lack thereof. In a time of increasing function and multipurpose usability in more and more products, it is nice to see something like the BHA-1 that is designed strictly to perform a single dedicated function with utmost precision and reliability. Combine that with Bryston’s standard 20-year warranty and you have something that is the audio equivalent of heirloom furniture. If you are in the market for a top-class headphone amplifier and don’t need a built-in DAC, you really cannot go wrong with choosing the BHA-1. Highly recommended.