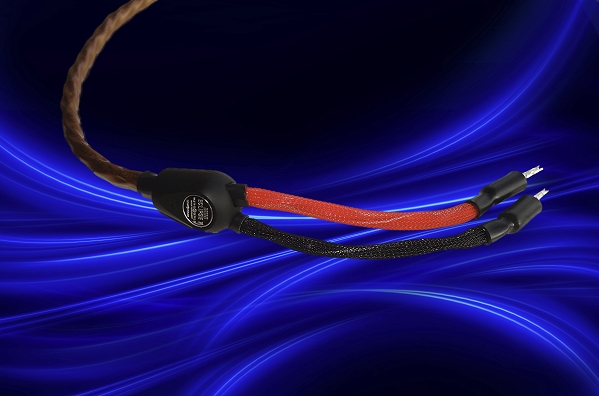 We have reviewed many interconnects and speaker cables over the years. Wireworld is a standout among them, because, in my opinion, they use real physics in the designs.

They consistently outperform generic cables, both in bench tests, and in the listening.

With speaker cables, on the other hand, the output impedance of a power amplifier is also low (0.2 ohms) and the impedance of a speaker is low as well (4-8 ohms). So, the cable impedance is much closer to those same values. The result is that speaker cable differences in sound are much easier to hear. Nevertheless, putting in a high end speaker cable does not always make a difference, because there are many variables involved. This is why the subject of cables is so contentious.

For this test, I used a pair of MartinLogan Summit X speakers, which are of an electrostatic hybrid design.

Below is the Impedance/phase plot for the Summit X. You can see that above 6 kHz, the impedance drops below 2 ohms, and it is less than 1 ohm at 20 kHz. The electrical phase is almost entirely capactive, with a small section at 500 Hz to 1.4 kHz being in the inductive region.

This presents an extremely difficult load for any amplifier, and because of the very low impedance above 6 kHz, the impedance of the cable can make a difference in the sound, which is what I found.

Here is a cross-section of the Eclipse 7 speaker cable. You can see there are four insulated (Composilex 2) 7N (99.99999%) copper conductors, each with 10 strands. Two conductors are used for each leg of the cable, resulting in an overall gauge of 14.

The Wireworld Mini-Eclipse 7 Speaker Cables Put to the Test

Besides the MartinLogan Summit X speakers, I used a laptop computer with JRiver software to play music stored on the laptop, an AURALiC VEGA DAC,  Pass Labs XP-20 preamplifier, and a pair of Classé M600 monoblock power amplifiers (600 watts into 8 ohms).

First, let’s take a look at the Impedance/Phase plot of stranded, 12 gauge speaker cable, 25 feet in length. You can see that the impedance is about 150 Milli-ohms up to 1.9 kHz, when it begins to rise, and is 575 milli-ohms at 20 kHz. The electrical phase at this point is + 720.

Here is the plot for a 25 foot Wireworld Mini-Eclipse 7 speaker cable, same lenght as the generic cable above. The impedance is 100 milli-ohms out to 2 kHz, and then rises to a maximum of 180 milli-ohms at 20 kHz. The electrical phase is + 550.

Well, I can sum up the difference in one sentence. In comparison to the Wireworld, the generic cable had some harshness (distortion) in the upper midrange, and rolled off high end. This is reflected in the not-quite flat midrange impedance of the generic cable, as well as its nearly 0.6 ohm impedance at high frequencies. This is so close to the actual impedance of the Summit X speaker at high frequencies, we get the interaction that results in the degradation in the sound quality. The harshness is something that occurs along with attenuation. If it were only a frequency rolloff, perhaps we could live with it. But, the addition of an edgy sound quality is not acceptable.

Not all speaker cables will perform the same with all combinations of power amps and speakers. It can be especially tricky with a tube power amplifier that has no global negative feedback, resulting in an output impedance of a few ohms. The best way to go about purchasing speaker cables is to get several models from your dealer at the same time, try them out, and buy the ones that work the best in your particular setup.

Just for the experience, I “rolled my own” speaker cable by using 10 gauge, stranded copper, polyethylene-insulated zip cord. I twisted two pairs of the zip cord so that there was a complete twist every 3 inches. Here are the results. The impedance begins to rise at 2 kHz and reaches a maximum of 100 milli-ohms at 20 kHz. It is capacitive (- 1800), until 2 kHz and then it swings abruptly into the inductive region (+ 1600). And this is just 10 feet ! Expanding the impedance to the 25 feet of the test cables would give us an impedance of about 250 milli-ohms at 20 kHz. This impedance is better than the 25 foot generic cable, but its conductors were 12 gauge.

So, making a cable that has almost no impedance and extremely low electrical phase is almost impossible. I said almost. The Wireworld does an excellent job of keeping these variables low. Their larger version of the Eclipse 7 speaker cable reduces the reactive impedance to nearly 0.

As an aside, I started this magazine 20 years ago based on a surprising experience with cables. I had been using 12 gauge zip cord for the rear speakers, but I hung it from nails that I had placed in the molding where the wall met the ceiling. My wife told me to get rid of that cable and find something that would go under the rug. At about that same time, I attended my first CES. A company with a small booth had just begun its business of selling flat cable (about 1/16″ thick) that had four flat conductors in it, insulated with Teflon. So, I got a 100 foot roll and cut the appropriate lengths, terminated them with banana plugs, and under the rug they went. My wife was happy because there were no lumps where the speaker cables were.

I went about my business, forgetting about the problem that had been solved, until one day, I was playing some music in surround sound mode. Whoa ! The high frequency range had expanded. It was at that point I realized speaker cable design could make an audible difference in the sound quality. I reviewed them on-line and what had started out as just a series of articles about the nature of high fidelity audio, turned into a magazine with reviews. And there you have it. I started an A/V magazine based on the most contentious subject in the arena. Cables.

In essence, speaker cables can make an improvement in what you hear through your speakers. But, depending on many variables, such as the output impedance of the power amplifier and input impedance of the speaker (some go very low, and there are some that are nominally 12 ohms), the effect will vary in amount of improvement. THAT is why the subject of interconnects and speaker cables produces arguments that occasionally border on violence. So, if you are going to meet with your friends, some of whom are rabid anti-cable in their opinions, and anticipate discussing your newly purchased high end cables, leave your semi-automatic at home. The nay-sayers will never be convinced that high end cables make a difference, regardless of bench tests that show the wide variation in electrical properties, so don’t try to pursuade them to listen to the music. What is important is that you enjoy them.