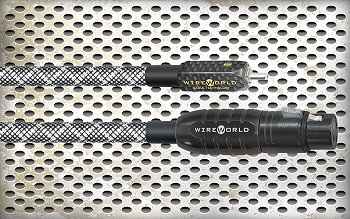 Wireworld’s newest iteration of its product line are the Model 7’s, compared to the previous Model 6’s. They have incorporated a DNA-like spiral to the conductors, which for the Platinum Eclipse XLR’s that I tested, are solid silver.

Because my past reviews of Wireworld showed almost unmeasurably low reactive impedance, I ran a little experiment by requesting review samples that were 20 feet long.

Finally, a measurable impedance, but it was less than 0.5 ohms. The 20 foot standard “Pro” cable (cables that are used for stage performances and connections from microphones to recording consoles) that I also tested for comparison, delivered an impedance of 5 ohms, 10 times more than with the Wireworld.

Here is a short video about the Platinum 7 XLR’s.

Here is a comparison between the Wireworld Eclipse 6 and Eclipse 7 speaker cables.

When I started pubishing Secrets, it was because I had an enlightening experience with cables. That was 20 years ago. I had attended CES, and a startup company gave me a roll of flat speaker cable. I wanted it only because I needed somethign to put under the rug in my home theater to go to the rear speakers. But, when I turned on the system and watched a movie, I noticed the rear speakers had more high frequencies than with the replaced cables, which were 13 gauge stranded zip cord.

I realized that cables could make a difference. Secrets was launched. However, further reviews of cables did not yield audible differences in most cases. I was disappointed. Then I began bench testing cables, and found major differences in the reactive impedance. I became more enthusiastic about the high end cables that began to populate the marketplace at an accelerated pace. Yet, still I was having difficulty hearing the differences that I knew in my heart must be there.

A few years ago, I met David Salz, the President of Wireworld. He showed his cables to me and explained the physics behind the designs. They made good sense, so I requested some for review.

What I found was the lowest reactive impedance of any cable I had ever tested. Some of them had such low impedance, the test equipment could not measure it. Now, I knew I had some cables that I should be able to hear differences. However, it was still difficult. I wrote it off to my age (I am almost 70 now, and my hearing has been affected by those seven decades).

I decided that I might be able to hear the differences if I used a long cable. So, I requested a 20 foot pair of their top model, the Platinum Eclipse 7’s in the balanced configuration. I used them with a Pass Labs Xs preamplifier and a pair of Pass Labs Xs-300 power amplifiers.

The Design of the Wireworld Platinum Eclipse 7 XLR Balanced Interconnects

As with most interconnects on the market, the Platinum Eclipse 7 comes in both XLR and RCA configuration, shown below. I tested the XLR version, partly because most of my equipment is fully balanced, and so I use mostly XLR balanced cables, but also because I had not yet put an XLR cable through bench tests. This is because XLR has three conductors, and only two conductors can be tested at any one time. But, I had a custom designed test box constructed for me that allows testing the hot conductors (+ and -) as well as a hot conductor and ground (+ and ground).

The Wireworld model 7’s use a configuration called the DNA Helix, which, of course, refers to the discovery many decades ago, that DNA in chromosomes is arranged in a helix (spiral). The diagram shown below is from Wireworld’s website, and shows the comparison of the conductor arrangement in a conventional cable with their design.

This second illustration provides more detail on the Platinum Eclipse, which is the model I tested, but in the XLR version. Note that the connector is made from carbon fiber. The graphic on the far right shows the helix. 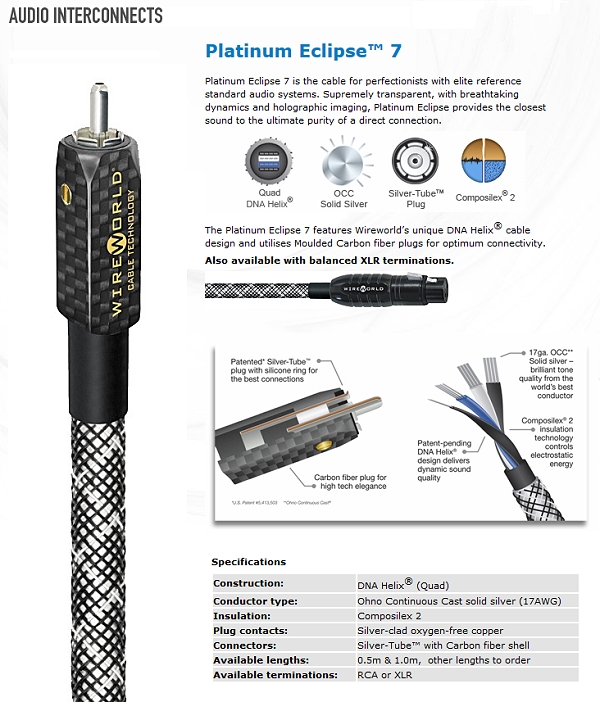 The Wireworld Platinum Eclipse 7 XLR Balanced Interconnects In Use

For the listening tests, I used an OPPO BDP-105 universal Blu-ray player, Pass Labs Xs preamplifier (fully balanced), Pass Labs Xs-300 monoblock power amplifiers, and Carver Amazing Mark IV ribbon speakers. All the cables in my high-end two-channel test lab are Wireworld, and I switched out the 20 foot XLR interconnects between the preamp and power amplifiers for the test. The test interconnects were the Wireworld Platinum Eclipse 7 XLRs and a 20 foot pair of “Pro” XLR interconnects that I purchased from an electronics catalog on-line. They sell to professional audio engineers who use them for musical stage performances and cost in the range of about $8 to $30 for a standard 20 foot cable.

Now, I am not going to put you through a list of albums that I listened to and try to mention the things that I could or could not hear between the two cables.

With the Platinum Eclipse 7 cable being 20 feet long, I could hear a difference compared to the standard Pro cable. However, what that difference was is not easy to explain. I can’t put it into words other than saying that the Wireworld cable allowed more “life” of the music to pass through. Remember, a good cable’s job is to NOT do anything to the music signal except provide a path. So, it could be said that the 20 foot Pro cable was removing some of that musical life that the sound had. Whether it was smeared detail due to the higher reactive impedance of the Pro cable, or a loss of some of the high frequencies, I don’t know. Since I am a senior citizen, my hearing is not what it is for younger people, and most of our readers are likely much younger than I, so I would expect that the effect I heard would be much more obvious to our readership. If you are an old geek like me, the effect you hear is probably modest, but I still think it is worth the cost.

The Wireworld Platinum Eclipse 7 XLR Balanced Interconnects On the Bench

Here is where you can see the major difference in the two cables. XLR cables have three conductors, connected to pins 1, 2, and 3 as shown in the following diagram.

First, the Pro cable. The Impedance-Phase plot is shown below for pins 1 and 2 (the + vs. the ground). The impedance is 4.4 ohms

Here is the same graph, but with a reduced scale so you can see the exact reading for the impedance. The phase varies more with the Wireworld, because a slight impedance rise at the high frequencies that is present for both cables, has a greater effect when the impedance is low. However, at an impedance of 0.45 ohms, this change in the phase is insignificant.

Well, afer 20 years of wandering the desert of indecision, I have found the oasis and become a high-end cable convert. If you are middle aged, you can probably afford these, but can you hear the difference? Probably, but maybe not, especially if you played in a garage band and didn’t use ear plugs. If you are young, say 20, you can hear the difference, but can you afford them? Probably not. Arghh ! !