Up NextBryston BR-20 Stereo Preamplifier Review
The SPL Director Mk2 is a preamp/DAC combo that keeps things simple while adding a couple of unique twists that make it something special.

Since its inception in 1983, Sound Performance Lab has been making professional-grade recording gear in their German factory. Now, SPL makes audiophile-grade items for the home as well.

The unit is not designed to fit in a rack as it is not very wide and has no rack ears available. It comes in three different finishes: black (like my review sample), silver, and red. It has two analog VU meters that can be adjusted based on the input signals gain (+10dB). It also has a tape loop should you want to run a graphic equalizer or tape deck with it. This is a rare item in this brave new digital world we live in, but it’s a nice option. Otherwise, the front has a large volume knob in the middle that has a silky-smooth feel to it and a selector knob that clicks through the ten inputs. Six are for analog sources and the other four are digital (including USB, Coaxial, optical, and AES). When a digital source is selected, the small bright red LED dot matrix display shows the selected source and sample rate. An example would be U768, which means USB at 768kHz.

In the back, the SPL Director Mk2 has two sets of XLR connectors as well as four gold-plated analog RCA connectors. The OEM power cord is detachable should you want to swap it out with one of your choice. The instructions that came with the unit were very concise and well labeled. Setting up the Director Mk2 took less than 15 minutes from unboxing to listening. After spending long periods of time setting up AVRs, this product was a refreshing snap to install.

I found the slightly retro design of the SPL Director Mk2 both intuitive and refined. The front of the unit is nicely balanced, and the display was easy to read from across the room. The volume knob also has a red light to indicate the volume level. So, what’s missing? Well, if you are looking for network connections or the ability to stream music, the Director Mk2 is not for you. Room correction? Not here either. And there’s no headphone jack. You can plug into SPL’s separate headphone amp if you are into private listening. There is no phono stage either. You also can not directly cast from Chromecast or Apple AirPlay2. In all fairness, you probably already have devices that do these functions and they can be plugged into the many inputs of the Director Mk2. I was able to play CDs with my Oppo UDP-203 and stream music via my PS Audio Direct Stream Digital DAC which gave me access to my Qobuz library and NAS. I ran my outputs to my Emotiva UPA-1 monoblocks via the balanced outputs on the Director Mk2. My speakers are the Sonus faber Sonetto V.

This is a good time to talk about the VOLTAiR technology SPL has developed. Almost all the audio devices we listen to have an internal voltage of 60 volts. The designers of the Director Mk2 do not think this is enough for true high fidelity and that the dynamic range of a product can be limited by this factor. Therefore, they have increased the internal voltage to 120 volts. Being increased by a factor of four allows for greater dynamic range and lower distortion. SPL has designed a special higher voltage op-amp section to handle this extra internal power. This video link will help explain the purpose the advantages of this technology VOLTAiR.

The preamp section can be used with amplifiers of your choice or with a set of powered speakers. There are two 12-volt triggers to power on/off external devices as well. A button on the back allows you to program a remote of your choice to control the volume and selector of the Director Mk2. It was easy to set up and functioned well by using the up/down, left/right buttons on my PS Audio remote. This made listening to music much easier as I didn’t have to add yet another remote on my coffee table. The large volume knob feels solid and has a silky-smooth feel when turned. A pinpoint red LED on the knob allows you to visually check the volume level from several feet away. 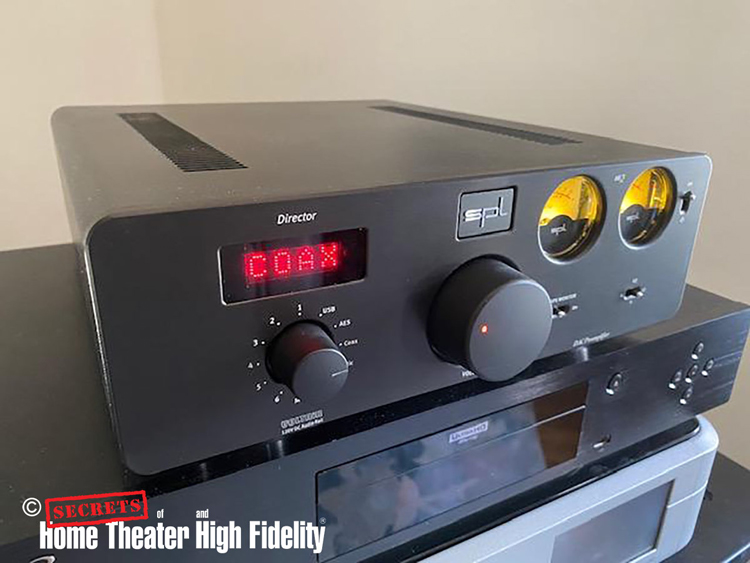 Setting up the SPL Director Mk2 was simple, and the easy-to-follow instructions are more than enough to get you up and running quickly. I ran balanced outputs to my Emotiva UPA-1 monoblock amps. For my main source, I used an Oppo UDP-203 to play CDs and stream from my NAS. I used a Mac Mini to stream DSD content (direct and DoP) via USB as well.

I noticed a few quirks early on, but none of these was a deal-breaker for me. First off, controlling the volume with any remote you already have on hand is genius. It was easy to set up and worked consistently well. My only complaint is that the volume would move in large increments and wasn’t granular enough for my tastes. It was often slightly too loud or too soft and the remote never seemed to find the precise level I was looking for at the time. Getting up and turning the knob worked fine, but sort of defeated the point of having a remote. Your experience may differ from mine. 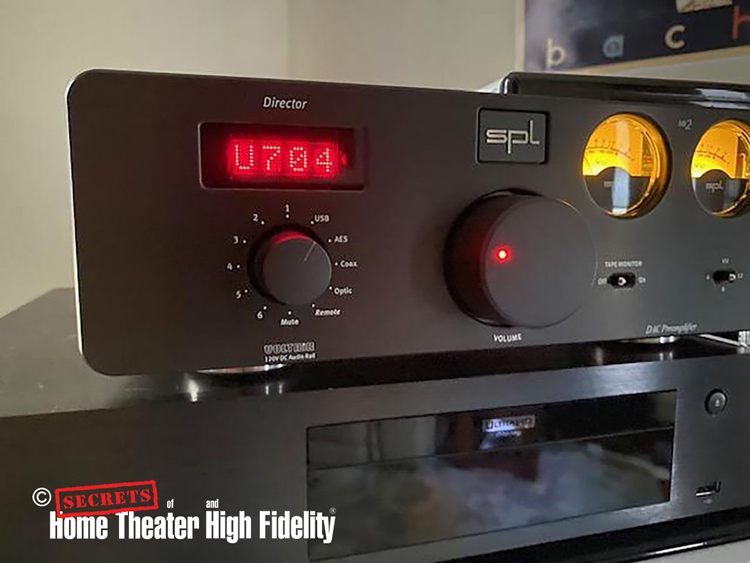 The second quirk was in the display when using higher sample rates. I noticed that an SR of 705.6kHz was displayed as 704kHz on the Director. It made no difference sonically, but it is odd. Also, after a few weeks I discovered that if I sent DSD to the Director instead of DoP, it would display U1, U2, U3, or U4 depending on the DSD signal, and not a sample rate like the DoP carrier. I’m fine with that, but I could not find that specific info in the user’s guide. I learned of it by accident, so it is something to be aware of when listening.

The listening tests went very well. I immediately noticed a broad 3D soundstage with nice front-to-back depth perception. All music, from solo instruments to full orchestras, had a solid feel and the dynamics were impressive. Sonically, the Director Mk2 was as fine sounding as anything I have reviewed this year.

This recording (from Qobuz, 24/96) of Brahms Academic Festival Overture conducted by Herbert Blomstedt boasts high dynamics and a wide soundstage. It has very soft passages with strings and great horn fanfares with plenty of exciting details that the Director Mk2 handled superbly. How much of this was due to VOLTAiR technology, I cannot say. But the performance on the Director Mk2 was as good as what I heard from other equipment I’ve auditioned this year. Treble was extended without being harsh and bass had punch without overemphasis.

Riders on the Storm (Qobuz, 24/96) by The Doors presented the soft rainfall with the occasional thunder roll off in the distance with a nice sense of rain coming down all around you and the thunder was well off into the distance directly in front of you. The loping bass line was tight while Ray’s keyboard playing had clarity and detail. Jim’s voice was spot on. His whispers were distinctly noticeable and seemed to float in the air. That effect can be lost on a lesser system during playback.

Hey Now by London Grammar (Qobuz 24/44.1) has some sound effects that extend well off to the sides of the speakers and a female voice that is plaintive and wonderfully emotional. When the synth bass kicks in halfway through, it can rattle the windows. It’s a short song, but you’ll want to hear it again when it finishes. The Director Mk2 made it sound musical and emotional.

The SPL DIRECTOR MK2 is a sonic powerhouse that combines musicality with a modern/retro design; a state-of-the-art DAC with cool-looking VU meters. Though I can’t claim VOLTAiR technology is the secret sauce, it certainly did not hinder the music from sounding its very best.

I found the SPL Director Mk2 to be well-engineered and sonically without blemish. If you are looking to set up a stereo system, the Director Mk2 would be a good choice if you prefer musical detail and dynamics to be paramount in your system. It doesn’t stream, but a streaming device can be hooked into it. Same with a turntable or headphones (which SPL also makes line stages for). VOLTAiR is more than a novelty as the sonics of the Director Mk2 were impressive. Pair this with a quality amplifier and you’re ready to go. With its detailed instructions, I would not hesitate to recommend this unit to a novice. I wish I had the Director Mk2 when I was in college, just getting into the stereo scene. You know, when VU meters first came out on all the cool receivers. The SPL Director Mk2 is a great balance of nostalgia and high-end audio.