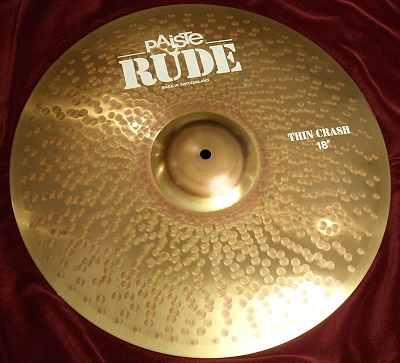 Paiste’s RUDE cymbal line was developed as part of the need for a heavy cymbal line that could take a pounding and produce volume that would cut through the high output amplifier stacks that were piled on the stages for Metal band performances. In this review, we take a listen to the RUDE 18″ Thin Crash.

Although classic cymbal bronze is 80% copper and 20% tin, a number of different alloys have been developed in the last several decades. In general, the more copper, the brighter the sound, other things being equal (hammering and lathing). They are often referred to as the letter B followed by the percentage of tin in the alloy, so in the case of the RUDE cymbals, which are 8% tin, it would be classified as being made from B8 alloy. There is also B10, B12, B15, and the classic B20.

A close-up photo, shown below, illustrates that there is heavy hammering, but no lathing. 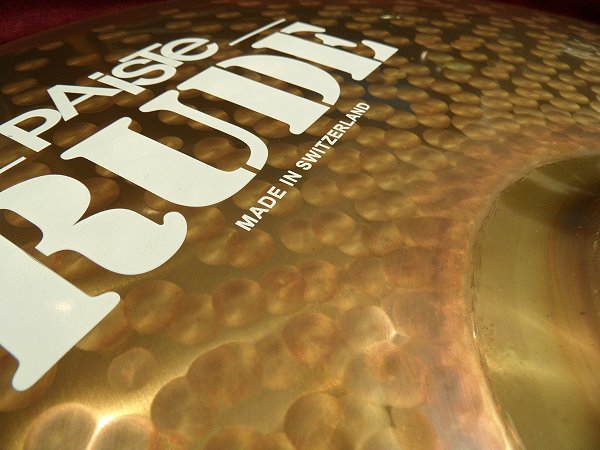 The RUDE 18″ Thin Crash shows its muscle every time it’s struck. It has excellent projection, and because it is not as thin as more conventional “thin” cymbals, it can serve as a ride cymbal as well. However, this is a Metal drummer’s cymbal, and most likely, you will not be giving it any love taps.

Shown below is a spectrum of the crash. The magenta graph line indicates the response at the initial strike from the drumstick (5B with nylon tip), and the yellow line is the spectrum 2 seconds later. The second graph shows Level vs. Time. At the attack (the leading edge of the sound when the cymbal is struck), the frequencies peak in the 3 kHz to 8 kHz region, followed by a slow decline to 60 kHz. After 2 seconds, the spectrum is the same shape as it was at the initial attack, illustrating excellent sustain.

Level vs. Time indicates that the peak volume occurs at 0.17 seconds.

Click to HERE to listen to an audio sample, which will include crash (when appropriate), ride, and bell sounds (these are 24 bit, 176.4 kHz wav files, so be sure your sound card is capable of handling these high resolution sound files).