Up NextA Collection Of New Vinyl For The Audiophile – September, 2019 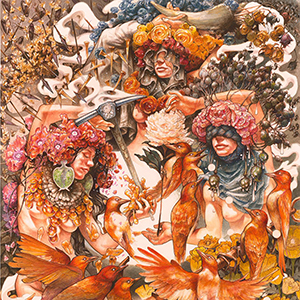 During Baroness’ tenure among the ranks of sludge and alternative metal, the Savannah, Georgia quartet has cemented itself as a household name for those who seek melody and anthemic ballads whilst still delivering riffs that get the head moving. As someone who started listening to Baroness several years ago, I was excited to hear that the band was aiming to release its fifth studio album this year. Now that over two months have passed since the album’s debut, I sat down with my vinyl copy of Gold & Grey to ascertain whether or not Baroness managed to again deliver the balance of clever composition and powerful grooves that are their trademark.

I am excited to say that the band hasn’t lost their touch. Gold & Grey delivers that same equilibrium that they have become known for, with their 17-song, hour-long album flowing together with ease. Baroness is able to successfully weave songs that reminisce on their roots, while not dwelling on the old. Tracks such as “Can Oscura” are largely composed of heavy-hitting riffs that remind the ear of songs like “Isak” from the band’s Red Album. This is not to say that Baroness has forgotten their recent work, however, as they maintain their seemingly effortless grasp on atmosphere and melody, allowing Gold & Grey to appeal to headbangers and classic rockers alike. Through the band’s deft combination of the aggression of their early work with the mystique found on the albums Purple and Yellow & Green, they fashion a truly enjoyable and versatile listen.

The vinyl itself was released on Baroness’ own label, Abraxan Hymns, and is adorned with beautiful art designed by frontman John Baizley. The gatefold LP also includes a lyric booklet and yet more stunning art on the inside. Abraxan Hymns has not slouched on the vinyl itself either, as the record plays smoothly and clearly, with the production clearly reciting each instrument in a balanced manner, allowing the listener to hear all the nuance of the record.

All in all, Baroness’ fifth effort is an enjoyable listen for those who appreciate skill and craft in music, and a worthwhile purchase for one who wishes to let his or her home listening rig stretch its legs. 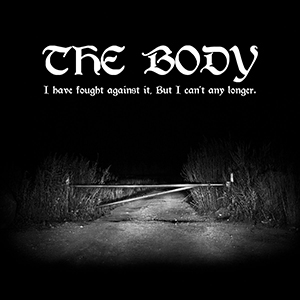 The Body
I Have Fought Against It, But I Can’t Any Longer.
Thrill Jockey Records
Performance:
Sound:

The Body is not for everyone. In fact, there are only a handful of people that can tolerate Chip King’s Nazgul-like, high pitched screams that remain consistent throughout the album. Most people that I have played The Body for scarcely want to listen for more than a few seconds. However, I adore The Body’s disregard for convention. The duet’s songwriting defies almost all accepted and abided rules in music. From their roots as a fairly straight-shooting sludge metal outfit, The Body has slowly journeyed further and further into the murky waters of experimental noise music. The Body’s abrasive and grating sound aims to make the listener uncomfortable.

And this is exactly how I felt during my first listen to I Have Fought Against It, But I Can’t Any Longer. Sounds ooze out of the albums every pore, and these sounds never leave the listener with a moment of respite. There is the occasional female guest vocal part, which is the only thing on this album that could be considered pretty. Walls of static seethe from King’s guitar and the mind reels to think of how he could produce such a harrowing scream without seriously injuring himself. I Have Fought Against It, But I Can’t Any Longer elicits chills and goosebumps (at least from me) just because of how off the wall it is, and how much emotion is packed into each note. The songs “Blessed, Alone” and “Sickly Heart of Sand” form an emotional and compelling climax, while “Ten Times A Day, Every Day, A Stranger” serves as an eerie afterthought.

The LP is plain, largely consisting only of the picture of a desolate-looking gate on the front. The two black disks that are contained within the gatefold are, likewise, void of decoration, leaving the speaking to the music. The album is produced with grit and tension, furthering The Body’s symphony of noise.

The Body has a niche crowd, there is no doubt about that. But while I Have Fought Against It, But I Can’t Any Longer is filled to the brim with sounds that make the listener shudder, it is a compelling experience that rewards those able to tolerate it. 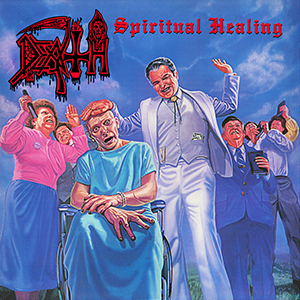 Any metalhead worth his salt knows the name Chuck Schuldiner and knows it well. The man is considered the godfather of death metal, and his band’s 1987 debut Scream Bloody Gore is widely regarded as the first album in the genre. Death’s 1990 effort, Spiritual Healing, has become a classic album over the years and marked a stylistic change that would introduce more technical and melodic elements as well as the move away from gore-oriented lyrics into more politically conscious territory. Death left its mark on metal with this seminal album, along with others that would proceed it, and lifted Chuck Schuldiner to a seat of respect and reverence within the world of death metal.

I can’t say anything about the music itself that hasn’t already been said. Having been on the shelves for almost 30 years, the album has rightfully earned the respect it commands. The musicianship is nigh flawless; the solos are melodic yet aggressive; the messages are poignant, and the composition leaves nothing to be desired. For those who have a stomach for heavier forms of music, Spiritual Healing is a must-listen.

However, I do wish to spare a few words about the Relapse reissue of the album. Relapse Records reissued the LP in 2012 since the album had been out of print for some time. The reissue pays proper homage to the original, relaying Schuldiner’s furious guitar work with fidelity and accuracy (If Relapse had botched the reissue, it would certainly have leagues of aggravated fans on its tail). The reissue also includes an insert that features a nostalgic collage of pictures, all taken from Death’s Spiritual Healing era. The notes include interviews with Schuldiner’s widow and members of the band, all especially collected for the reissue. The reissue also returns producer Eric Greif’s name to the credits, after a conflict with Schuldiner left him without recognition.

Spiritual Healing is a piece of death metal history, paving the way for future experiments and paradigm shifts. After the reissue, there is no shortage of copies, and thus there is no reason not to have this vinyl in your collection.