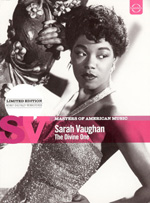 Up NextCD/DVD Music Reviews for the Audiophile - May, 2010 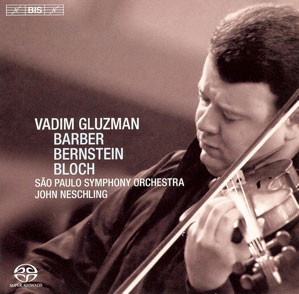 Perhaps it’s only natural, given violinist Vadim Gluzman’s spiritual roots, that his latest recording of 20th century repertoire showcases music by Leonard Bernstein, Samuel Barber, and Ernest Bloch. Beyond the fact that two of these composers share Gluzman’s Jewish-American identity, all three are united in their gift for lyrical, heart-tugging melody.

The five expressions of love that comprise Bernstein’s Serenade after Plato’s â€˜Symposium’ (1954) cast an oft-thrilling, sidewise glance at Greece via Broadway. As controversial as Bernstein’s genre blending may have been at the time the work was written, his Serenade communicates the unstoppable exuberance and love for human beings that led the composer to champion civil rights and concertize at the fall of the Berlin Wall. The musical language of Bloch’s Baal Shem â€“ Three Pictures of Chassidic Life (1923) may be different, but it grew out of a similar quest for inner truth and cultural authenticity. The work is named after an 18th century rabbi who believed in a direct link to God through singing, dancing and ecstasy.

Barber’s contemplative, ultimately rousing Violin Concerto (1939), on the other hand, expresses beauty without thematic limitations. The soaring, heartfelt longing of the opening theme, on which Gluzman does not linger as long as some, is unforgettable. Gluzman and his â€˜ex-Leopold Auer Stradivarius’ join John Neschling and the Sao Paolo Symphony Orchestra to infuse these performances with soaring beauty. 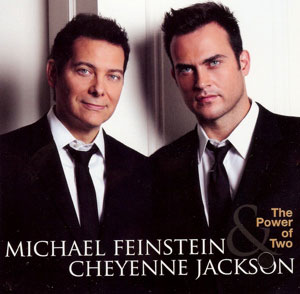 No political slogans, no rainbow flag on the cover. Just two of our finest male Broadway and cabaret singers blending together perfectly on love songs initially intended for people of the opposite sex.

On The Power of Two, Michael Feinstein, 53, pre-eminent classics cabaret crooner of the past few decades, and Cheyenne Jackson, 34, handsome male lead in the Broadway revival of Finian’s Rainbow, join together in song. There’s nothing self-conscious about the recording to distract from the fact that two men singing about love is as wholesome as sugar-free, organic Apple pie. But what is uncanny is how easily their voices, styles, and vibratos merge into one, while the differences â€“ Feinstein’s lighter, sweeter ease on high and Jackson’s more assertive baritone â€“ make for perfect musical contrast.

The CD includes nine solo outings, with Michael playing piano on Cheyenne’s recordings of the Gershwins’ â€œA Foggy Dayâ€ and â€œSomeone to Watch Over Me. â€ Most rewardingly, the boys sing together on â€œI’m Nothing Without You,â€ â€œMe and My Shadow,â€ â€œThe Power of Two,â€ â€œWe Kiss in a Shadow,â€ â€œSalt and Pepper – I’m Nothing Without You,â€ and â€œSomeone to Watch Over Me. â€ There’s no need for innuendo; it’s all out in the open. Need I say that the singing and accompaniment are impeccable and a total joy? 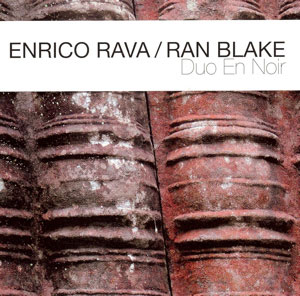 In 1999, Italian trumpeter and flugelhorn virtuous Enrico Rava teamed with pianist Ran Blake for a special evening of duos. Amidst clinking glasses and low voices, the two giants performed a set partially inspired by film noir.

Their marvelous music making began with a moody version of a Nat King Cole fave, Ehben Abbez’s â€œNature Boy,â€ and ended with Richard Rodgers’ â€œThere’s a Small Hotel. â€ In between came two noir classics, Bernard Hermann’s â€œVertigo/Lauraâ€ and Roy Webb’s â€œThe Spiral Staircase.â€ These pieces may be in some ways dark, but their beauty is haunting. After works by Kelly Donahue, Rava, and Al Green came music that Thelonious Monk made his own, Paul Weston’s â€œI Should Care. â€ Ran Blake explains in the original liner notes, â€œI never had the courage to do it until I could be inspired by another performance. My thanks for Abbey Lincoln, and how I loved playing this with Enrico.â€

Blake may be famed for his noir-inspired musicality, but Duo en Noir is far more laid back than dark. The duo’s version of Vincent Youmans’ â€œTea for Twoâ€, for example, may question and ponder before its melody emerges in bits and pieces, but it ultimately swings rather than broods. The same goes for Rodgers’ classic. Incongruous pairings that sing wonderfully. 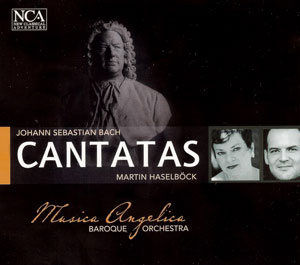 The two vocal soloists on this recording of three Bach Cantatas, performed by Martin HaselbÃ¶ck and the Musica Angelica Baroque Orchestra of Los Angeles, are both first-rank artists. Canadian/American soprano Dominique Labelle, whose sensational performance as Athalia in Philharmonia Baroque Orchestra’s performance of Handel’s oratorio in the spring of 2009 inspired gushing reviews, first made her mark in Peter Sellars’ acclaimed production of Mozart’s Don Giovanni. While Austrian baritone Florian Boesch is less well known, he is also becoming a soloist of choice in early music, Mozart, Mahler, and art song.

The CD contains two of J.S. Bach’s greatest solo cantatas, Jauchzet Gott in Allen Landen, BWV 51 (Acclaim God in All Lands) for soprano, and Ich Habe Genug, BWV 82 (It is Enough). (The CD misidentifies the cantata as Ich Habe Genung. Not only critics make mistakes). Because Bach arranged Ich Habe Genug for both baritone and tenor, singers of virtually every voice type, including counter-tenor, have recorded it either whole or in part. Soprano Natalie Dessay not only dared record both cantatas, but also wins ArkivMusic.com’s top recommendation.

The program starts with Ich Geh und Suche Mit Verlangen, BWV 49 (I Search by Request). A delightful warm-up, it not only gives both soloists a chance to shine, but also begins with an extended Sinfonia that allows the instrumentalists to shine.

Nonetheless, it is for the two solo cantatas that most will gravitate to this CD. As does virtually every soprano I’ve heard save for Elisabeth Schwarzkopf, who sounds like she’s leading the entire German army in an assault on God’s kingdom, Labelle navigates Bach’s ultra-challenging line by adopting a light, sweet tone. Her sound is so different from her Athalia and Donna Anna that you’d be hard pressed to guess who’s singing. The voice needs a bit more oomph to rock my boat — the coloratura is by and large clean, if unshowy — but it’s quite fine. Martin Patscheider’s trumpeting is exceptional.

Beyond requiring a seamless vocal line, Ich Habe Genug demands a singer who can sink deeply into feeling. Fine as Boesch may be, he does not seize the heart as do baritones Thomas Quasthoff and Matthias Goerne (my favorite), bass-baritone Hans Hotter, and mezzo-soprano Lorraine Hunt Lieberson.

The excellent recording is far cleaner and more colorful than most. Trading natural resonance for close-miked clarity, it marvelously conveys Bach’s mastery of instrumental color and contrast. 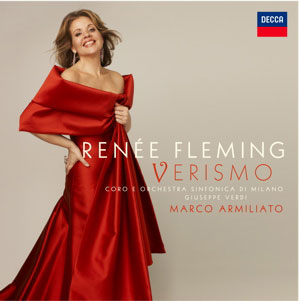 Eyebrows raise at the thought of RenÃ©e Fleming, a soprano who has built her reputation on the creamy beauty she brings to Mozart, Strauss, and other lyric soprano roles, singing the wrenching verismo repertoire of Puccini, Mascagni, Catalani, CilÃ¨a, and others. Verismo is about blood and guts, sweat and suffering, and enough over the top singing to sear the makeup off Ms. Fleming’s ubiquitous glamour shots. It’s about vocalism with an edge, vocalism that takes risks. You can’t utter a convincing death shriek while insuring that your tonal center always remains intact.

Nonetheless, it’s hard for an artist to resist the urge to branch out. Thus, following up her 2006 mixed bag recording, Homage â€“ The Age of the Diva, on which she sang heavier repertoire by Verdi, Puccini, CilÃ¨a, JanÃ¡cek, and Korngold, Fleming has ventured into the prime spinto territory often associated with Olivero, Callas, Tebaldi, Scotto, Muzio, and, in the latter part of her career, Freni. The results are far more satisfying than you may think.

Dismiss any thoughts that Fleming has gone slumming in verismo land because she’s going for broke as her voice has declined with age. Recorded in 2008, in her 49th year, her voice is as gorgeous as ever. If anything, a certain hardness that formerly crept into her upper middle range has been replaced with even creamier, generous tone, and the lower range has grown lusher. It’s hard not to fall in love with her sound.

She also knows what she’s doing. In her program note, she freely acknowledges that she has listened to what her predecessors have done with this repertoire. She knows how to sing with conviction, and summons forth the sobs, accents, and dynamic swings that this music calls for. She may lack tears in the voice and a classic spinto edge, but she sure knows how to play on her strengths.

To these ears, a major handicap is conductor Marco Armiliato’s refusal to indulge in the radical portamentos of classic verismo. Fleming alludes to this when she writes, â€œArmiliato kept the tempos flowing, and I attempted to bring a stylistic purity and clarity of text to the music, while retaining as much emotional expression as possible.â€ Translation: she did what she could. But nothing can alter the fact that a Wally who sings â€œohimÃ¨, ohimÃ¨, ohimÃ¨â€ in strict time does not lift the music off the printed page. Ditto for the two scenes from La Rondine when conducted with greater lilt. Where is Nicola Luisotti when we really need him?

Neither Fleming nor Muzio sounded young when they recorded â€œSi, Mi chiamano Mimi,â€ but listen to the difference in impact when a soprano born to sing Puccini is given enough space to make her point. As for Olivero, whom Fleming spoke with, she remains sui generis and definitive. Ultimately, this is a CD that you’ll want to hear, then use as a springboard to further explore verismo repertoire. 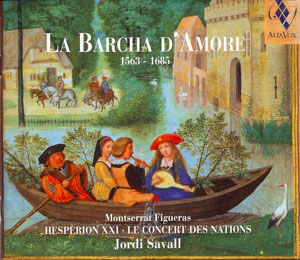 This marvelous collection of performances, recorded for various companies between 1976 and 2008, takes us on a musical journey to Italy, Germany, Spain, England, and France. In addition to Figueras and Savall, our shipmates include such luminaries as Hopkinson Smith on lute, Ton Koopman on harpsichord, Andrew Lawrence-King on harp, Rolf Lislevand on theorbo, and Maria Cristina Kiehr as soprano.

Another highlight is the group of three songs by Caccini, in which Figueras displays her remarkable facility with florid embellishment. The English set includes the charmingly accented soprano singing an extremely fetching lullaby, â€œMy little sweet darling,â€ and an almost nine-minute instrumental version of Greensleeves to the Ground.

The purely instrumental selections are no less captivating. In two cantus dolorosa (sad songs) by Scheidt, Savall and HespÃ¨rion XX prove as sonorous as Figureras, shaping phrases with remarkable sensitivity. These musicians play as if every phrase were a precious, vital heartbeat.