Up NextBluesound Pulse 2i Wireless Streaming Speaker Review
Do you have an OPPO or select other SACD/universal player with an HDMI output? Do you have a newer DAC that accepts DSD over DoP via its digital Coax or Toslink input? Then the GeerFab Audio D.BOB may be just the thing to consummate a more perfect SACD union!

Digitally speaking, yes, I still buy physical media. There, I said it. As much as ROON, Qobuz, Tidal, and seemingly everyone else want me to move to an internet-paved and cloud-powered musical existence, there are more than a few music lovers out there, like me, who stubbornly cling to our little silver platters of song. Stranger still, we purchase more of them! And for me, many of them are of the SACD variety. Why is that? Well, first I tend to like to own things that I happen to enjoy, so that means tangible goods. And second, while the SACD as a strictly stereo music carrier didn’t initially win me over, the recent proliferation of SACDs with both multi-channel and stereo mixes has. I am finding interesting musical material, both older and newer that I want to buy, and in most cases, the stereo portions are newer re-mixes and re-masters or new high-resolution recordings. And I want to hear them and experience them in their native format at full resolution.

Focusing on stereo here, until now I have been using my venerable OPPO BD-105D universal player as my SACD player of choice (OPPO please come back to us!). Taking advantage of its fine internal DACs and analog balanced outputs, its sonics have been very good. But time and technology march on, and I have since upgraded my entire system with better components including an excellent Benchmark Media DAC. A DAC that my SACDs couldn’t take proper advantage of… until now. In this rather specific and targeted instance, the GeerFab Audio D.BOB was the potential solution to my problem.

Due to the intricacies (and legalities) of SACD’s copy protection and because my DAC doesn’t have an HDMI input, I can’t pass a native DSD bitstream over a SPDIF connection to my Benchmark DAC. I could buy an HDMI capable DAC like the very fine Bryston BDA-3. I can use a different inexpensive aftermarket device called an HDMI audio de-embedder (as I discuss later) which requires that the OPPO player convert the DSD output to PCM and the de-embedder extracts an 88.2 kHz PCM bitstream and can output that via coax to my DAC. A workable but imperfect solution. But, again, up until this point I have not been able to send the native DSD bitstream from my OPPO player to my current new DAC. Enter the fine folks at GeerFab Audio. In a nutshell, the D.BOB Digital Breakout Box takes the DSD64 bitstream from the OPPO’s HDMI output and allows it to be sent over coax or optical to my Benchmark DAC3 B via the DoP (DSD over PCM) protocol without violating the embedded copy protection. If you have the requisite OPPO or other suitable SACD player and a DoP over SPDIF capable DAC (GeerFab has lists of compatible players and DACs on their website) you are in business. Just make sure to configure your player according to GeerFab’s recommendations. 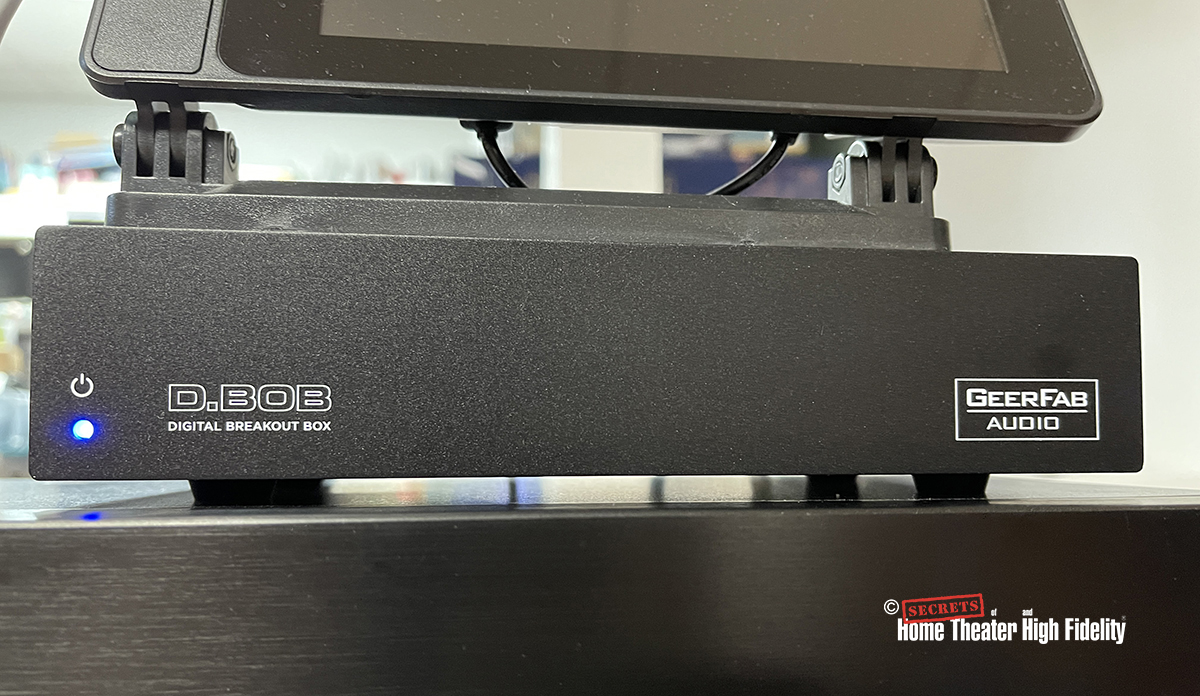 The D.BOB is just a simple black box with a little blue LED in front to indicate that it’s on. 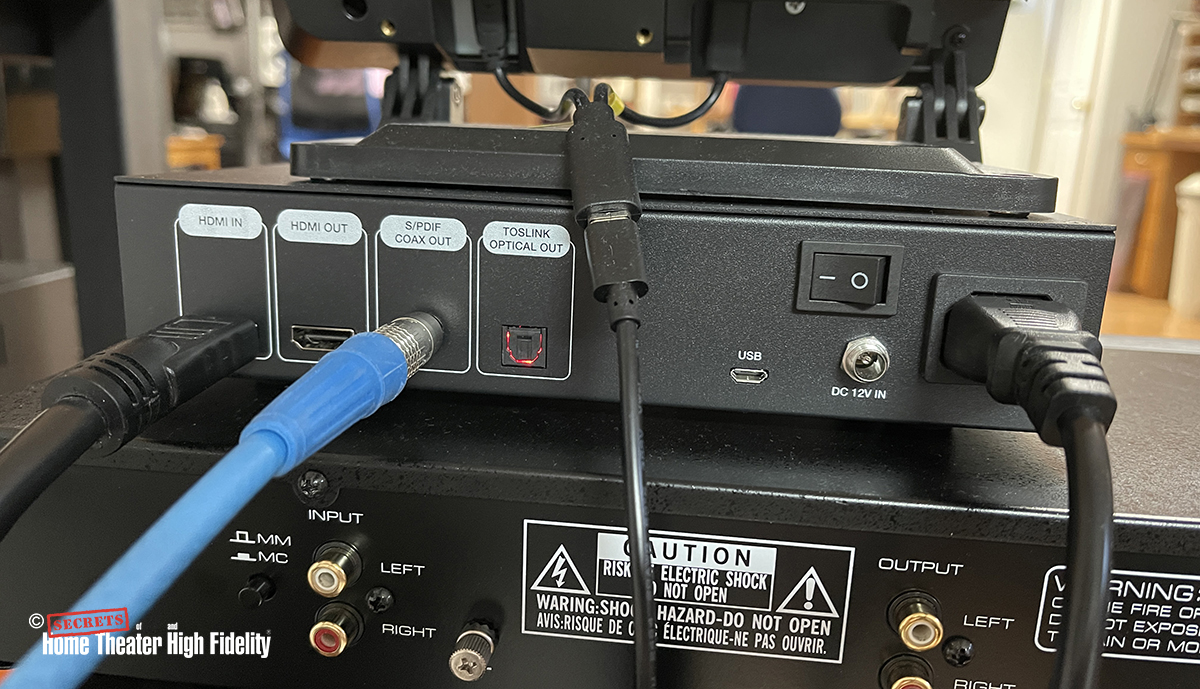 On the back, there is a power switch, an HDMI input, an HDMI output to pass the video (up to 4K) on through to your display, a coaxial digital output, and an optical digital output. There is also a mini-USB jack for firmware updates and a 12 VDC external power adapter jack and a grounded IEC connector for normal operation from your AC mains. Operationally the D.BOB uses a Sil9533 processor chip to handle the audio extraction and pass-through HDMI signaling and a separate FPGA (Field Programmable Gate Array) chip to encode the DSD data to SPDIF via the DoP protocol. The design and function of the D.BOB are unique enough that currently a US Patent is pending. The only included accessory is a detachable AC power cord. 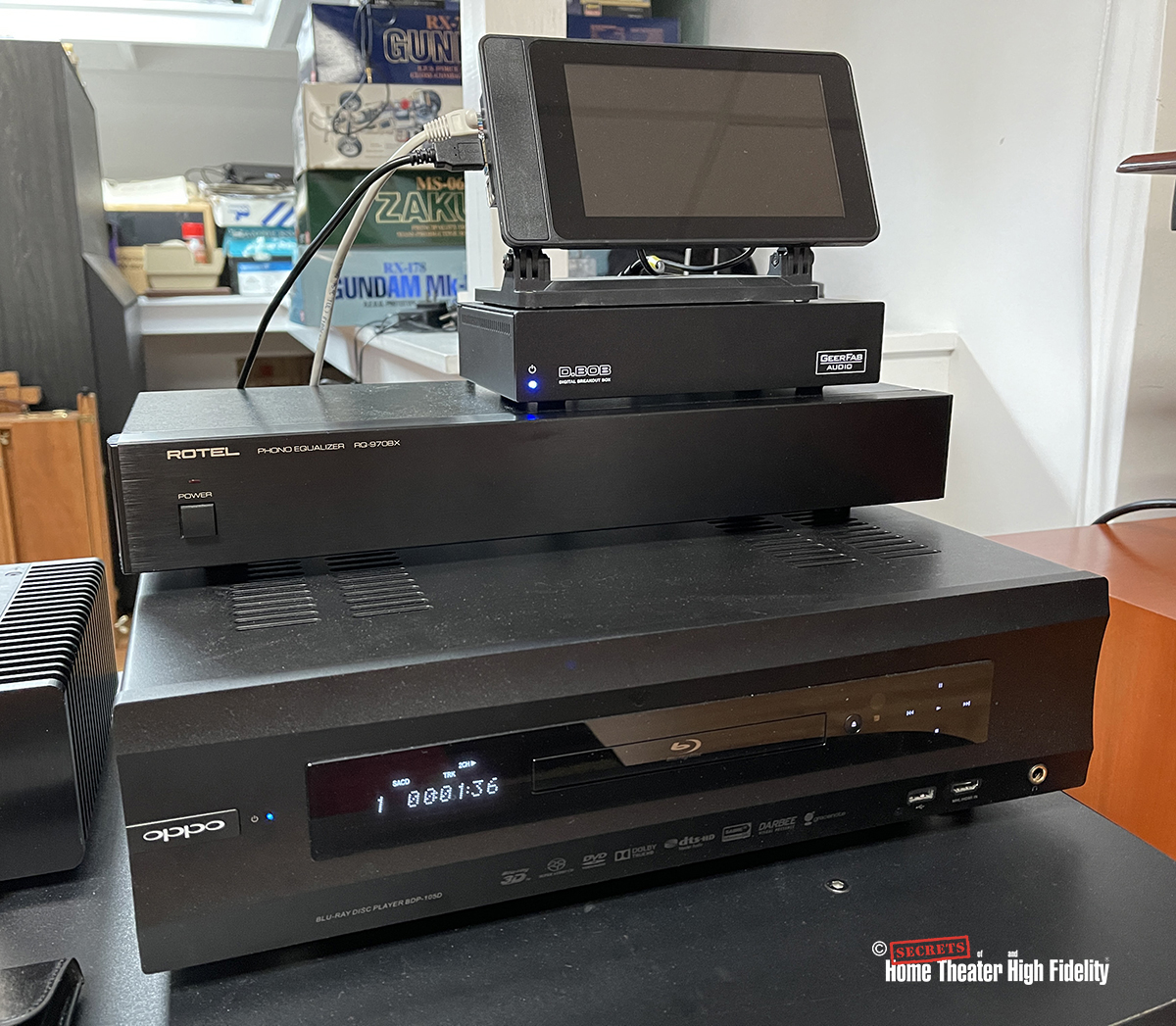 I connected the HDMI output of my OPPO BDP-105 Universal player to the HDMI input of the GeerFab Audio D.BOB. Then I connected the coax output from the D.BOB to one of the coax digital inputs of my Benchmark DAC3 B which supports DSD over DoP. The balanced outputs of my DAC were connected to my Benchmark HPA4 preamp and then onto my AHB2 power amplifier which powers my Revel F228Be loudspeakers. I was also able to connect the XLR balanced outputs of the OPPO player to another input of the preamp. This would allow me to quickly switch between the DAC’s output and the OPPPO’s analog output on the fly via remote while music was playing. The HPA4 allows me to adjust the level of the OPPO analog input signal to match the level of the DAC3 B signal so a volume imbalance wouldn’t sway my opinion. The OPPO’s analog output is quite capable and sounds plenty good on its own when playing SACDs as it has its own dedicated ESS ES9018 8-channel DAC running in stereo mode. This would be an excellent test to see if the newer Benchmark DAC would make my SACDs sound noticeably better or not.

It’s important to note that the D.BOB will also pass up to a 24-bit/192 kHz PCM stereo bitstream from any other silver disc you happen to be listening to, on to your DAC for processing. So once the little black box is inserted into your digital pathway, there it can safely stay. The manual expressly recommends that when powering on your system, the D.BOB should be powered on first, followed by your player, and then the rest of your system. I expect this is to allow the D.BOB to successfully “HDMI handshake” with your player so that the copy protection flags, or other digital sentries can be copacetic with each other. The one time I did power the D.BOB on after my player I got no sound at all coming out of my speakers when playing a disc. Shutting everything down and starting things back up in the correct sequence fixed the issue entirely. Eric Geer, the company owner and principal designer of the D.BOB told me that since the unit draws almost no current when active, it is fine to simply leave it on continuously. 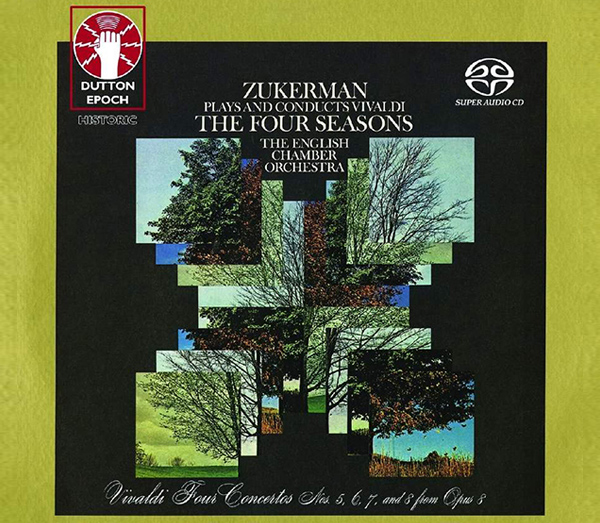 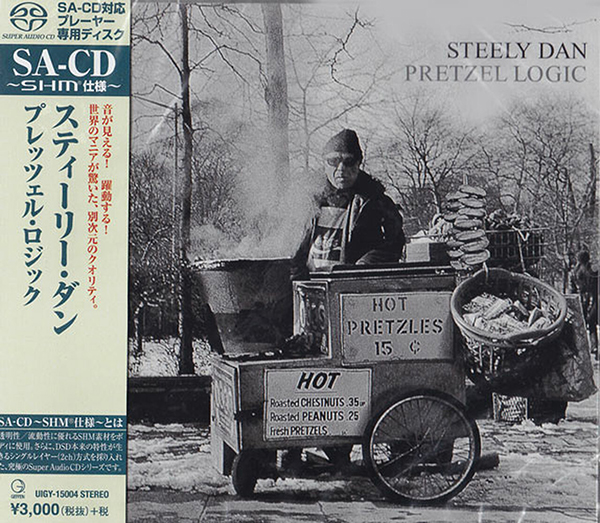 Listening to some of my favorite SACDs through the OPPO/D.BOB/Benchmark chain was a bit of an eye-opening experience. I wasn’t expecting a night-and-day sonic improvement and I was even prepared for the eventuality that I would not be able to tell a difference at all. But I did! It wasn’t dramatic but there was a noticeable improvement in subtle musical details and spatial cues that I noticed with the D.BOB and the DAC3 B over listening to the OPPO’s balanced analog output. It was most noticeable in classical music such as my Vivaldi’s The Four Seasons SACD with Pinchas Zukerman conducting the English Chamber Orchestra. When listening to the various movements of this classic piece, I was able to get a slightly better sense of the recording space with the D.BOB/DAC3 combo. Switching back and forth with the level matched inputs, I thought I heard a little smoother and sweeter tone coming from the strings in general and a bit more detail from the background harpsichord. Even when switching to my Japanese SACD pressing of Steely Dan’s Pretzel Logic the D.BOB/DAC3 B combo continued to impress with a modestly more dimensional and smoother presentation on “Rikki Don’t Lose That Number” and “Any Major Dude Will Tell You.” Those same tracks came off sounding a little flatter and colder through the OPPO alone.

I also tried using my Kanex HDMI Audio De-Embedder that would take the OPPO’s SACD over HDMI output and send a down sampled 88.2 kHz PCM signal to the DAC3 B. And while I couldn’t instantly switch between it and the D.BOB, I could between it and the OPPO’s analog output. I determined that I liked the sound of this option (Kanex) the least in that it had a little bit of harshness to its results compared to even the OPPO’s analog output. So, for me, the GeerFab Audio D.BOB does indeed appear to be a worthwhile little addition to my stereo setup.

Now let’s not kid ourselves, at $1000.00 the D.BOB is not for everyone. Even if you are into SACDs, many have elected to rip their collections to DSF files, via some of the methods that others have published online, (Secrets does not encourage or endorse this practice due to the questionable legality) and just stream the files along with the rest of their digital library. But if you are like me and still like to spin your discs, and you have an OPPO or other solid player, why should you remain saddled to the older and in some cases pedestrian DACs that are found in these players? Yes, if you’re committed, you could always buy a new high-end SACD player (and there are some impressive ones out there). But, if you already have a suitable player/transport (or are open to buying a decent affordable player like the Sony UBP-X1100ES for example) and a suitable external DAC, adding the D.BOB may be an inviting alternative to consider. 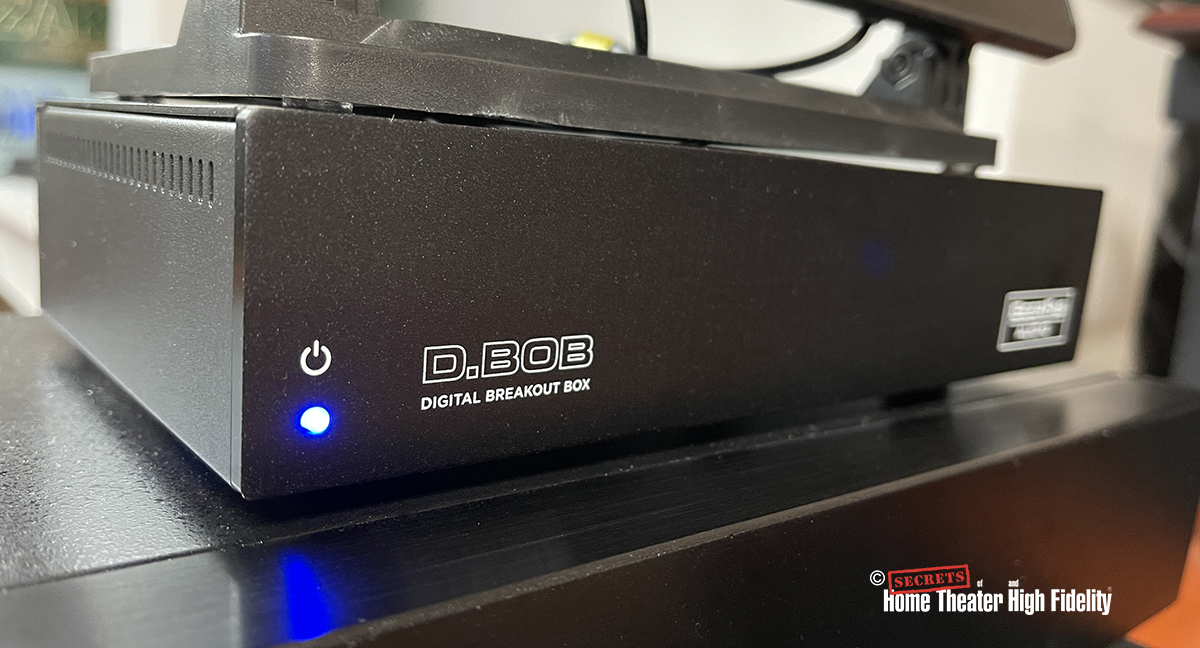 The GeerFab D.BOB Digital Breakout box is a solution for audiophiles with a specific use case. If you love your SACDs and you want them to sound their best, and if you have a compatible player and if you have an external DAC that accepts DSD over DoP, then the D.BOB is very much for you. Admittedly, that’s a lot of “ifs”, but I just so happen to fit in that category, and I have better things to do with my time than muck around with trying to rip my SACDs and worry about the legalities and ethics of doing so. The D.BOB just plain works for me. It lets me take advantage of my newer DAC and my SACDs sound better for it. It also sounds better than using my player with other types of cheap commercial HDMI audio extractors. And it does its job without running afoul of the SACD copy protection issues. Hi-Fi is full of little black boxes that are said to do all sorts of things to improve your listening experience. Most of these claims tend to be sketchy at best. But if you have the need, the GeerFab D.BOB is the legit little black box that actually works!