The focus of this product is squarely aimed at people that want the best sound reproduction they can get, while having the ability to take their movie library to the next level with 4K upscaling. After reading through the spec sheet, I could tell that this player was taking aim at a similar product, the highly-lauded Oppo BDP-103.

I’ve had my Oppo BDP-103 for several years now. It’s been the foundation of my review system, both for video and audio reproduction. It has never failed me in operation and has worked as a reference player for both movies and my large multichannel SACD and DVD-A library. For around $500, it is one of the most indispensable pieces in my equipment rack.

Now, along comes the Yamaha BD-A1060 for the same price, boasting similar specs and functions. Could this be an Oppo BDP-103 killer? Or will it be another product that is “close, but no cigar”? A true universal player should support all disc formats, but many products fail in some way or another… usually the ability to play the all but defunct DVD-A format. Looking at the labels on that are silk screened onto the player, DVD-Audio is conspicuously absent.

The BD-A1060 is a cleanly designed unit that looks similar to many other Blu-ray players on the market. A few distinguishing features meet the eye upon closer inspection. Around back we have a single HDMI output, optical and coaxial digital jacks, a network connector, IR in/out, RCA stereo analog outs and a pair of balanced XLR outs.

Up front are the power button, a USB jack, transport keys, a Pure Direct button and a peculiar toggle switch called CD Mode. The disc tray is centered on the unit and has a sturdy feel to it. The tray opens smoothly and quietly when operated. The unit comes with a comprehensive remote and instruction booklet, but no HDMI cable. If you are like me, you most likely have a half-dozen HDMI cables in your closet. For those few of you that are still into 3D, this player will have you covered as well. I liked the physical weight of this player. When picking it up, it felt every bit as substantial as my Oppo. I know that weight alone does not mean quality, but if you have ever picked up a feather weight player at a brick-n-mortar…well, you know what I mean.

Internally, the BD-A1060 has some nice features that really enhance its performance. It sports a 192kHz/32-bit DAC for excellent audio reproduction. All stages after the DAC through to the output terminals are balanced. When used with an amplifier that has balanced input terminals, you can achieve the highest possible music reproduction performance. Oddly enough, the player has no volume control, so an integrated amp (with volume control) would be a wise choice. The top and bottom of the player are made of steel (0.6mm top/1.2mm bottom). 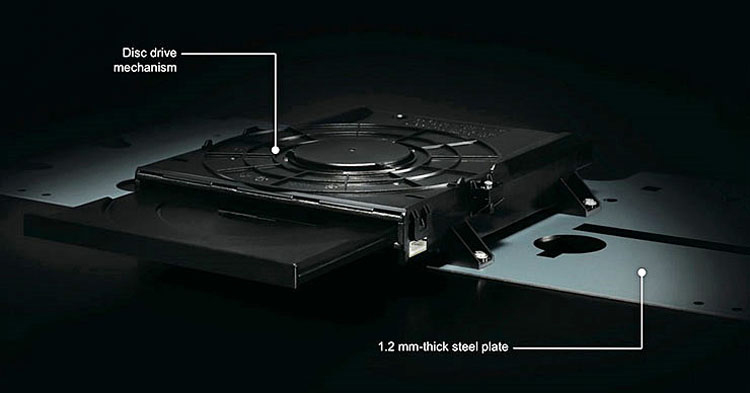 The disc mechanism is bolted to the bottom plate and positioned in the middle to help reduce vibration. The circuits are the same type of block chemical capacitors used in many premium AV receivers, with high-grade chemical capacitors.

The power supplies, as well as the digital and analog sections, are shielded from each other. In Pure Direct mode, the video sections are turned off so the audio reproduction chain stays pure. When the toggle for CD Mode is engaged, the revolution of the spinning disc is slowed by 30% to help reduce vibration and improve the error correction reading of the disc. 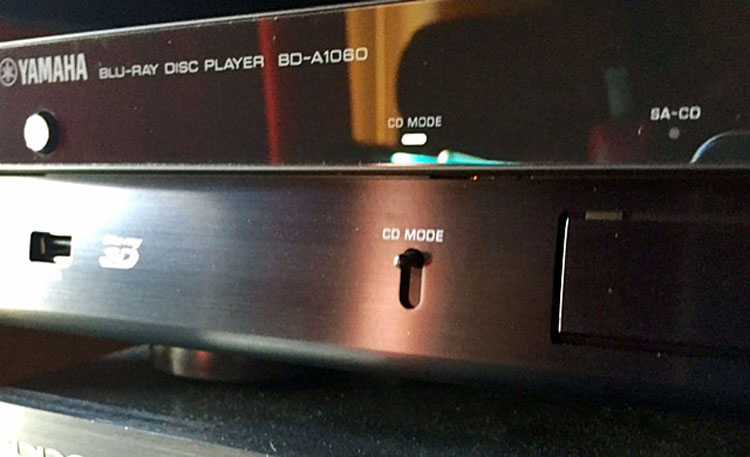 Though this feature looks great on paper, I found that the sonic benefit was beyond what I could hear. I couldn’t tell you if it actually works, but I can say it did not degrade the sound quality in any way.

Wi-Fi and Wi-Fi Direct are also built in. Wi-Fi is defined as connecting to a router and playing content from your network, where Wi-Fi Direct allows you to connect to the player directly via a device… say, your phone for instance. Miracast is supported as well for DLNA server content playback. Interestingly enough, there are no apps with the exception of Vudu. In my book, that is no big loss as I have several streaming devices now and hardly ever use the apps that come on the Oppo BDP-103.

Audio is one of the main focuses of the BD-A1060. It can play SACD, CD, DVD, BD-Audio, DTS-MA, Dolby TrueHD and HDCD, as well as FLAC, ALAC up to 192/24 and DSD at up to 5.6 MHz resolution. Though not listed, I can confirm that this player also plays DVD-A. Hooray! You only get two analog stereo outs in the back though, not the full 5.1 outputs available on the BDP-103.

The remote is somewhat cluttered and has a redundant Setup button. It lacks backlighting, which I feel is necessary on a piece of home theater equipment. However, all of the features you would need to operate the player are on it, including CD mode and Direct Mode.

Video-wise, the upscaler on this player is as good as my BDP-103. The main menu screen is very minimalist, but gorgeous. It shows a Yamaha grand piano and the black level is stunning. Here’s a screenshot which I hope conveys what I mean. 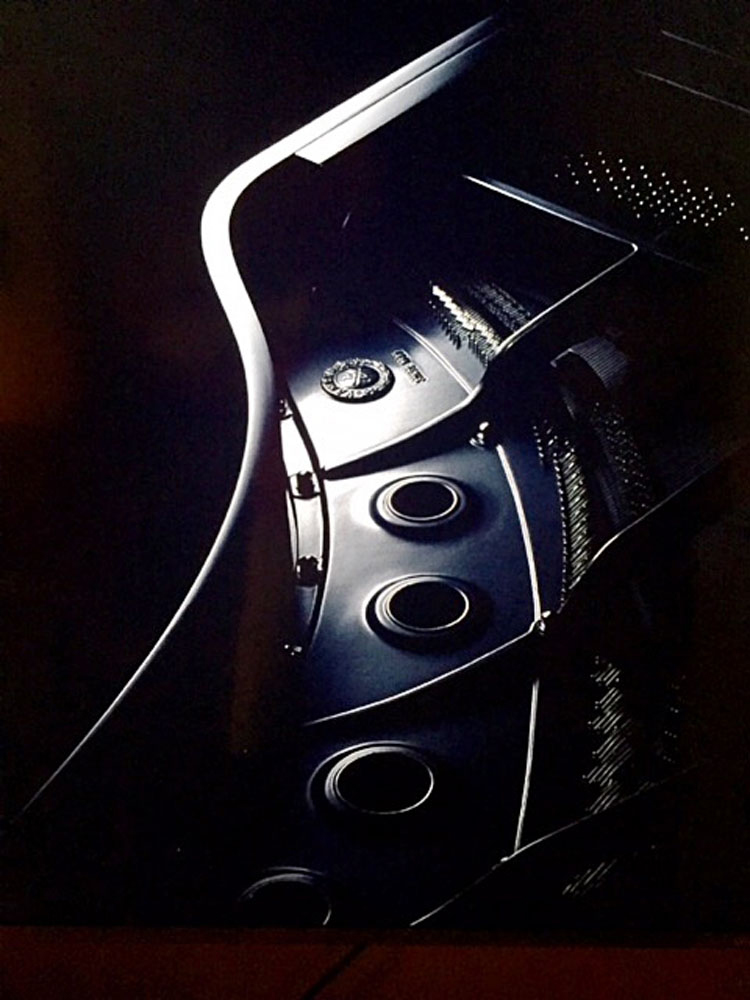 I have recently changed out my old DLP HDTV for a new 4K VIZIO P55C1, and I am still getting used to its superior black levels. A great example of the A1060’s ability to generate a beautiful picture with excellent contrast is the opening scene in Chapter 11 of the BD movie Prometheus. The screen starts in total blackness when suddenly a small but brilliant white light appears in the center. As the light grows, you begin to realize it’s a flashlight held by a pair of astronauts approaching you in a large cave.

As they get closer, more of the immediate area around them is revealed. The darkness of the cave was super inky black. Upscaled to 2160p, the picture looked razor sharp and the colors and contrasts were impressive. I could find very little difference from this verses the BDP-103. Skin tones were spot on too. Other players I’ve watched show a slight push to orange. 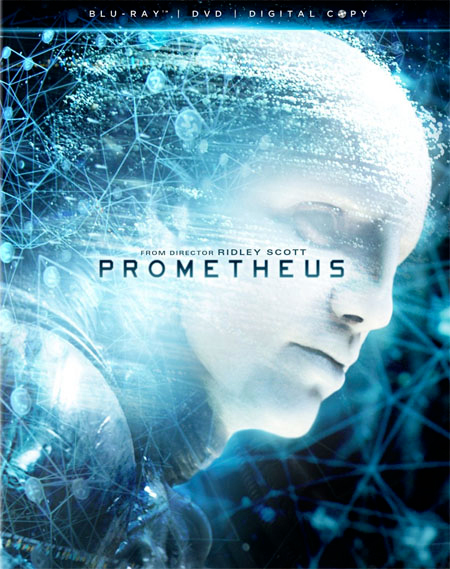 I saw no jaggies or aliasing, which usually rear their ugly heads when viewing static diagonal surfaces or quick panning scenes. I can see why some people will not be in a hurry to buy a new Ultra HD Blu-ray player when their 1080p library can look this good just by upscaling. In fairness, the loading of the disc and fast-forward or chapter-skip commands took slightly more time (3-4 seconds) than the Oppo. The BDP-103 can load a disc and reach the FBI warning almost 5 seconds faster than the A1060, but that is hardly a deal-breaker.

As fine as the video quality was, it does make one wonder why Yamaha didn’t make a true Ultra HD Blu-ray player with all of these features in the first place. Sure, it would have added to the cost…maybe even a lot. But let’s face it, the immediate future is going 4K, and if you want this player to be around for the next several years, well, why not 4K? I have no plans to dump my BDP-103, but an Ultra HD Oppo with HDR would sure give me pause! My other complaint with A1060 is its lone HDMI output. The pre/pro in my rack does not pass through 4K or upscaled 4K video. I had to run the HDMI video signal directly to my UHDTV and a coax digital cable to my Emotiva UMC-200. The BDP-103 has two HDMI outs; one for video to the TV and another for audio. I know I should upgrade my processor, as many of the new ones can do 4K pass through, but my piggy bank is showing its ribs at the moment.

The music chops of the A1060 are in almost every way equal to the BDP-103. It played just about everything I threw at it and it played it very well. The balanced outs are great, but because there is no volume control on the A1060, you will have to send the signal to a preamp of some type. Because the single HDMI is going to the TV, I lose the ability to send DSD to my processor. Of course my current processor cannot handle DSD, so I have to convert it to PCM. In any case, the single HDMI out makes life a bit harder for us who do not want to upgrade to yet another processor, and you will have to choose either better video or better sound if you own an older model. This might be a deal breaker for some of you.

I have a large selection of multi-channel SACDs that range from Jazz to Classical. They all sounded very good on the Yamaha. I threw in the DVD-A version of Emerson, Lake and Palmer’s Brain Salad Surgery, and lo and behold, it played perfectly with both sound and video. Many other universal players are compatible with almost everything except DVD-A, so this was a pleasant surprise. To make sure it was not a fluke, I played Yes’ prog-rock opus Fragile, also without a hiccup. I might add, the screenshots were upscaled and looked good on the screen, too.

Again, audio-wise, the A-1060 sounded every bit as good as the BDP-103, though doing a real A/B comparison was not possible or practical. So other than that single HDMI issue, I could easily trade one player for the other.

Build Quality, Along With Superior Sonic and Video Performance Makes THE YAMAHA BD-A1060 a Powerful Centerpiece For Any Videophile And/or Audiophile.

The Yamaha BD-A1060 brings a lot to the table in terms of both audio and video performance. It lacks all of the apps that the Oppo BDP-103 has and that single HDMI out is a bit of a disappointment. But these things may not have any bearing on what you are looking for in a universal player. As a standalone music player, the A1060 is excellent and in this case, truly universal. It costs about the same as an Oppo BDP-103 and the XLR balanced outs might meet your needs better than the Oppo. Frankly, if I had to choose one over the other, I could easily live with either. Not having dual HDMI outs may not matter to you if you have a newer AVR that passes Ultra HD. On the audio side of the coin, having dual balanced outs might be a compelling reason for you to go with the Yamaha if audio quality is an important feature. The Yamaha may not be an Oppo BDP-103 killer, but it sure is mighty close to being its equal. I guess that, in and of itself, is a high compliment. As far as I am concerned, I am waiting for the first company to bring forth a universal 4K player. But until that day, the Yamaha BD-A1060 is a worthy precursor!