The HiFiMAN HE-400i is the sequel to one of my favorite headphones, the HE-400. Dr. Fang Bian and his company HiFiMAN have taken the technical advances they put into the new, beautifully executed HE-560 and placed them in a more affordable package. Costing $499, this entry-level headphone may seem anything but entry-level to most, but in the world of planar magnetic designs, this is a bargain.

The HiFiMAN HE-400i is the sequel to one of my favorite headphones, the HE-400. Dr. Fang Bian and his company HiFiMAN have taken the technical advances they put into the new, beautifully executed HE-560 and placed them in a more affordable package. Costing $499, this entry-level headphone may seem anything but entry-level to most, but in the world of planar magnetic designs, this is a bargain. If you are looking for an absolute steal, the original HE-400 can be picked up for only $299 now, a ridiculous value indeed.

To better understand what the HE-400i delivers for $499, take into consideration that the big brother HE-560 rolls in at $899. So you are getting the new lightweight design, new single-sided planar magnetic driver, and the top notch comfort for almost half as much. Of course there are some sacrifices that must be made in order to deliver the HE-400i at a lower cost, but they are hardly deal breakers. 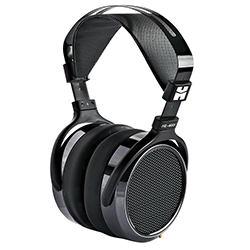 Design, Setup, In Use , and Rating of the HiFiMAN HE-400i Planar Magnetic Headphones

The HE-400i comes in a lovely looking presentation box, of which a photo will do more justice than my words. 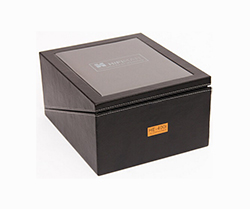 It adds a lot to the value of the product, making these headphones feel as special as they deserve. Although with their ability to play well via portable devices, perhaps a solid portable carrying case might have suited the job better. Nevertheless, a very pleasant unboxing experience. 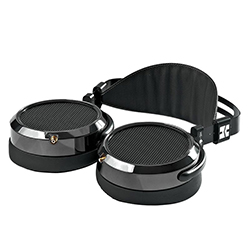 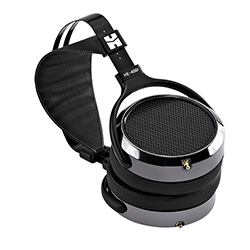 The HE-400i makes use of the brand new headband design HiFiMAN has engineered. The floating design suspends the headband underneath the main support band, allowing even distribution of weight. This also makes for a larger range of adjustment for different head sizes than the previous design. Up next on the list of improvements would be the new FocusPads. These new ear pads have a beveled shape, with more padding placed behind the ear and are made of pleather and velour. These changes were made to increase both comfort and performance.

I can confirm that they do help with comfort, but determining the FocusPad’s effect on sound performance was a bit trickier. Much like the HE-560, the HE-400i is easily the most comfortable over-the-ear headphone I have had chance to wear. They are snug, but never clamp with too much pressure. The soft, but breathable, FocusPads cup around the ears and the overall light weight keeps your head in the music. The ear cups are finished in a high gloss paint, instead of the HE-560’s wood. The finish is essentially black, but some lights reveal a hint of color. There are no complaints in the looks department from me, but larger cans like these may not win any fashion awards. When your music sounds this good, you won’t care.

Connecting the HE-400i to your favorite source is a 5 foot cable, with HiFiMAN’s admittedly difficult to twist on connectors on the headphone end and a 3.5mm miniplug on the other. There is just the slightest bit more room between the screw and base of the earcup for the twisting action that seemed to make connecting the cable on this new model a tad easier. Also, the connection point is placed a bit towards the front, whereas previous models had the connector bottom center, allowing the cable to fall more naturally on the chest.

I will say, even though they are bulkier, there’s something very satisfying about the locking mini-XLR type Audeze uses, but given I am not changing cables out often, this isn’t a big complaint. The cable has a nice fabric sheathing that seems to resist tangles. I find the shorter cable and miniplug quite telling as to what HiFiMAN believes the HE-400i should be used with and that’s portable equipment. That’s where the sensitivity of the HE-400i comes into play.

With a sensitivity of 93 dB and impedance of 35 Ohms, the HE-400i are 0.5 dB more sensitive than the HE-400. I found them to perform even better with my iPhone than the HE-400’s, producing plenty of volume for my tastes.

The HE-400i is a high-end headphone, thus it is capable of delivering the subtle, and sometimes not too subtle, nuances of better amplification. Powering them with the beastly HiFiMAN EF-6, a class A monster built to handle the demanding HE-6 headphones, and the AURALiC Taurus MKII let the HE-400i shine. Since many will choose between this $499 entry level model and the higher end HE-560, I thought it prudent to do a bit of comparison. 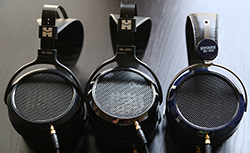 With Patrick Doyle’s track “Wedding Night” from Frankenstein, I heard a touch more clarity and transparency, especially in the bass, with the HE-560’s. The double bass, the lowest of the bowed string instruments, play with a sense of command in this track and the HE-560’s were better able to capture that. I could hear more texture and detail to the low end. On The Black Keys “Little Black Submarines”, the strum and pluck of the acoustic guitar is a bit more vibrant and tangible on HE-560 although the clarity and presence of Dan’s voice is still there with the HE-400i. Every so often, and only the slightest amount, these headphones can sound a little bright at higher volumes.

I noticed this in particular with M83’s “Outro” track, which I love to pump the volume on. That extra $400 for the HE-560 does get smoother high frequencies at louder volumes. Please keep in mind though, that the HE-400i still sounds better than any other headphone under $500 I’ve been able to listen to. It is tough to say whether or not the difference is worth the added cost, as that is always up to the individual buyer, but there is no arguing the quality of HiFiMAN’s newest entry level model.

Where the HE-400i clearly outshines its more expensive big brother, is when using with a portable device. I was almost taken aback at how well the HE-400i sounded. Full bodied sound, an open soundstage, and plenty of volume to hear all the details. Jonsi’s score for We Bought a Zoo was presented with a huge soundstage, left to right and front to back. Each mallet instrument hit with all the precision and clarity I have come to expect from HiFiMAN. Jonsi’s unique vocals were full, with a body behind the voice, and, thankfully, missing any chestiness that can come from unwanted resonance. Miles Davis’ muted trumpet buzzed with life on Kind of Blue and John Coltrane’s sax sounded spot on during “My Favorite Things.” The HE-560 needs a bit more juice to show its full potential, so you can count on having to fork over even more cash for a decent headphone amp, making the HE-400i an even greater value.

HiFiMAN has somehow managed to craft an even better headphone than one of my favorites, the HE-400. With its second generation HE-400i, the newly designed headband, new FocusPads, and significant weight savings have created the most comfortable over-the-ear headphone I have ever worn. Add on to that a lush, velvety sound that is both accurate and immensely enjoyable to listen to and you have a big winner.