NAD solved this problem with their M3 Integrated Amplifier, which has a rated output of 180 watts per channel, at 0.004% THD+N, and clipping (1% THD+N) at 220 watts. The power output is the same at 8 ohms or 4 ohms, and this is part of the reason they can pack so much power into an integrated chassis: by controlling the maximum output so that it does not interfere with the preamplifier circuit. Although the M3 was introduced several years ago, it still represents a break-through product, because the amplifier will drive low sensitivity, low impedance speakers to full volume, all in one integrated package. Some changes have been implemented since its introduction, so we felt a thorough look at this product, with bench tests, was warranted.

The M3 is officially classified as dual-mono rather than stereo, because each amplifier has its own separate power supply. This is not a defining feature, but rather, is just one item that does separate it from other integrated amplifiers. By having the two channels configured as dual-mono, this greatly reduces crosstalk between channels.

The preamplifier section uses JFETs in Class A operation. Volume, Tone Control, and Tilt utilize precise 0.1% tolerance resistors that are controlled by a digital circuit. This eliminates wiring that would otherwise have to go to the front panel and back to the circuit board. I know you might be thinking at this point, “But I thought that tone controls worked best if left in the digital domain.” Well, remember, the M3 is a totally analog product. There is no DAC input because the M3 doesn’t have a DAC, USB or otherwise, nor does it have A/D conversion. The only digital circuit is the one that switches the various precision resistors in and out of the analog circuit for volume, tone, and tilt control.
The output stage monitors the load impedance to prevent distortion levels from going too high, and thus, the amplifier tends to deliver volume levels that belie the 180 watt output spec.

The front panel (see large version of picture at the beginning of the review) has an On/Off power button and volume control knob. Underneath the LED display panel are buttons labeled “Listen” (You then select the input that you want from the remote control), “Record” (Sets the input to be sent to the Record output jacks on the rear panel), “Mode” (Stereo, Left, Right, Mono), “Balance” (Left vs. Right Volume), “Tone” (Tone Controls), “Biamp” (uses selectable crossover frequencies of 40 Hz, 60 Hz, 80 Hz, or 100 Hz,  if you want to drive the tweeter and midrange driver of a speaker with one of the power amplifiers, and the woofer with the other channel), and “Speakers” (A, B, A+B). The fact that you can connect two sets of speakers to the M3 is reflected by the fact that it is rated into 3 ohms – very unusual for a product of this type and price point.

The inside of the chassis wastes no space, and you can see the two separate power supplies along the sides at the bottom. The heat sinks are very large, and the unit got pretty warm during use. I would guess it is biased about 10 watts per channel into Class A. 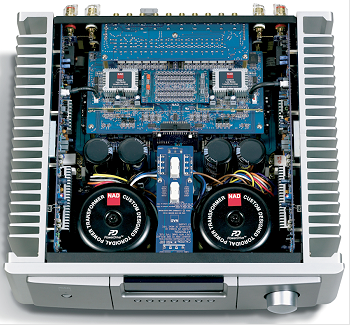 As you can see in the photo below of the rear panel, it is packed with connections, including the various pairs of RCA analog inputs, one set of XLR inputs, and also IR connections and trigger for remote turn/on of other amplifiers (which you would need if you use the M3 in Biamp mode). The Main In/Pre Out has removable U-shaped connections for ease of using the M3 as a bi-amplifier.

The XLR inputs are fully balanced, to deliver Common Mode Rejection, i.e., electrical noise that is picked up by the interconnect. The balanced +/- input pins feed into identical 100k//100pF discrete buffers and then to a discrete differential amp with unbalanced output  to the rest of the unbalanced preamp. There is a trim pot that adjusts common mode rejection to > 70dB. I used the XLR input for most of the bench tests.

The M3 package includes two remotes, one with all the buttons, and a small one that has the most often used buttons. They are luminescent in the dark but are not illuminated by back lighting. 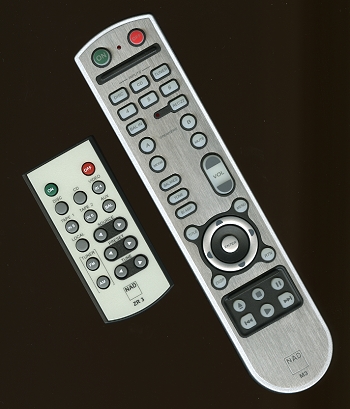 I tested the M3 with an OPPO BDP-95 universal player and Carver Mark IV ribbon speakers. Interconnects and speaker cables were Wireworld and Marc Audio.

I have to say that for the past several decades, I have been a “Separates” audiophile. I use individual components for the source, preamplifier, and power amplifier. One of the reasons I went this route was because integrateds just didn’t have enough power for the kind of volume that I wanted.

The M3 changes all of that. Its ability to deliver room-filling volume in my not-so-easy-to-drive ribbon speakers was amazing. Couple that with terrific detail, deep bass punch, and I realized that here was an integrated that could satisfy a “Separates” hifi enthusiast, but who might have limited space – such as a small apartment – or a spouse who won’t put up with seeing a rack full of components taking up one wall of the living room.

I am going to create a new term to describe the M3. It is a “Bias-Killer”, meaning my bias against integrateds disappeared with the first disc I put into my OPPO and pressed “Play”.

OK, so about all that detail I mentioned. Sarah Chang, Dvorak, and the London Symphony Orchestra are a challenge for any audio system. The very high frequencies of her violin, Dvorak use of multiple octaves, and an orchestra not know for being timid, make for great listening, if the audio system can deliver what is demanded of it. 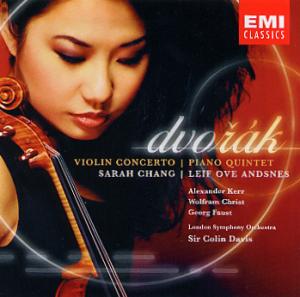 After Dvorak, I felt in the mood for something more laid back, so when I see album titles like, “The most Relaxing Classical Album in the World . . . Ever!”, the “Buy this album now” button in my web browser gets clicked.

The choice of musical selections on albums such as this one are not always my particular preferences, but they do indeed relax the listener, namely me. But, for the first two or three selections, I sat up and paid a lot of attention to the sensations that the audio was making me feel, rather than whether or not I liked the music. Did I feel irritating harshness? No. Did it sound soothing? Yes. And, I actually did like the selections. So, for the rest of the afternoon, I listened to this album, which has two CDs, measuring my heart rate and blood pressure every 15 minutes (after all, my degree is in the biological sciences). Both went down. Hey, you never know. Maybe Blue Cross/Blue Shield will pay for the M3 as cardiovascular disease prevention. 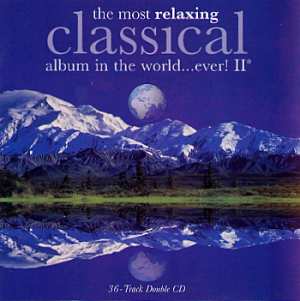 OK, back to reality. Below is shown the cover art of a test album that I have used so many times, I think the digital image is wearing out. In particular, the “Copland Fanfare for the Common Man” has bass drum thuds and brass played at fff (“Fortissimo – as loud as can be played), and maybe another f to go with it. If a preamplifier, power amplifier, or speaker is not up to the task, this album will let you know.

So, did I get the M3 to clip? Of course I did. I could get my previous 1,200 watt monoblocks to clip with this recording. It is typical Telarc, with no compression. However, the clipping with the M3 does not sound quite the same as with other amplifiers, and apparently, this has to do with the circuit that makes the amplifier deliver almost the same maximum output at 4 ohms as it does at 8 ohms. More succinctly, easier on the ears.

Notwithstanding, I don’t recommend playing any amplifier at full volume. It may not damage the amplifier or your speakers, but definitely, it is bad for your ears – and the damage (usually tinnitus, and eventually, hearing loss). And I certainly suggest you refrain from putting this album through its paces with a set of ear buds that seal tightly in your outer ear canal. Ear buds can easily generate 120 dB or more, and if you popped this album in your iPod, put in your ear buds, and started the Fanfare without checking to see what your last volume setting was, you might hear the left ear bud in your right ear, and vice versa.

With that said, I played the Fanfare at modest volume, and the bass depth was marvelous, courtesy of a robust power supply, and the brass was clean, detailed, and melodic, courtesy of low IM.

Overall, the sound of the M3 was slightly warm, not as much as a pure tube amp, but a bit away from neutral. I had a very enjoyable listening experience during the review process. 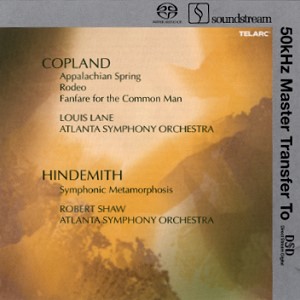 Distortion measurements were performed within an 80 kHz bandwidth, except where specified. The XLR input was used, except where noted. A Carver Mark IV quasi-ribbon speaker was used for the load, except for the THD+N vs Power Output, where an 8 ohm power resistor was used. The test signal was 10 volts RMS.

At 1 kHz, distortion was very low, at 0.002%. The third order harmonic is the predominant distortion peak.

IMD was a very low 0.003%. Secondary peaks in the 14 kHz region were very small, and there were no further peaks at 21 kHz and above. This is excellent performance.

THD+N vs Frequency showed one of the flattest response graphs I have yet seen in any power amplifier. Usually, there is a rise at the high end of the frequency spectrum, but there is none here.

Shown below is an Impedance and Phase plot for the Carver speaker that I used in the measurements.

At 4 ohms, the sharp knee was at 220 watts, and clipping at 240 watts. The output at 8 ohms vs 4 ohms was nearly identical, which is part of the NAD design. This keeps the amplifier stable into any load.

The M3 is not only an excellent integrated amplifier, it is an unusual one as well. The distortion measurements did not change much between 8 ohm and 4 ohm loads, which means the output tended not to move into areas that the power supply could not handle. This was by design, and it’s no wonder that the M3 is still around after five years, with only minor changes. It’s great. I am not sure anything else needs to be changed.

If I lived where space was a consideration, an integrated amplifier would be appropriate, and based on the listening and bench tests, this is the one I would choose.