Unfortunately, it was defective, and I luckily got a refund. Then, I purchased an Akai GX-625 reel-to-reel tape deck. It also turned out to be defective. The right channel was fine, but the left channel was very weak. I tried to have it repaired, but it sat at the first repair shop for five months. The technician said he was having trouble finding parts. He said he tried two different sources with no luck, so I had him return the deck to me.

Once I got the Akai GX-625 tape back deck from the repair station that kept it for five months without repairing it, I found and sent the deck to another repair station on the East Coast. He repaired it in one week, saying that the parts were generic and easily obtainable. He replaced three transistors, fixed the electronic speed control, lubricated appropriate parts, cleaned everything, and fully calibrated it for ATR tape. It is now in superb condition. So, it appears that checking out the potential repair station where you might be sending your vintage reel-to-reel tape deck is absolutely critically important.

He returned the deck to me. It cost $225 for the repairs. Shipping to and from the East Coast where the repairs were done was about $135 each way (I live in California). The parts were generic, so there is no reason why the first repair guy I sent the deck to in the middle of the country (USA) should have had the deck for five months without repairing it. He said the parts were on back order. I don’t think so.

I went around in circles getting the insurance that I bought at the same time to agree to pay the repair claim. When I purchased the deck, the company selling the deck said it was serviced. The deck originally arrived with brown tape residue all over the guides and heads (photo below). 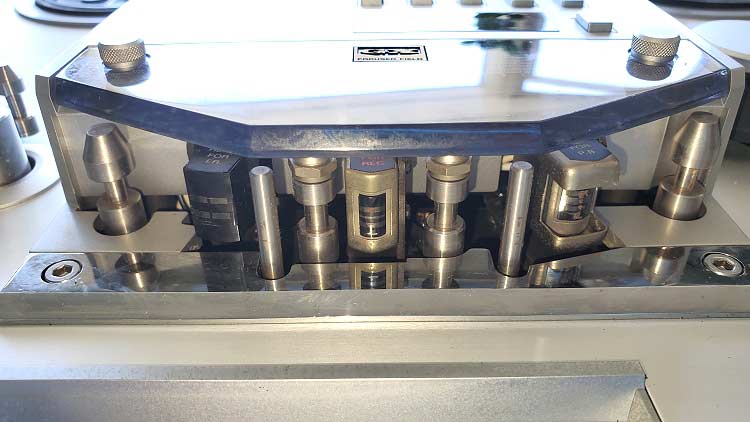 The left channel did not work. I don’t believe this deck was serviced at all. If you plan to purchase a used deck, which just about all tape decks are, you have to be really careful, and expect that it will need repairs. Repair parts on the Akai were easily available. This is not the case for all brands of tape decks. Check for availability of parts before purchasing the deck. Ask about the brand and model number on reel-to-reel tape deck forums as to the quality of the deck and any known design problems. If you purchase a deck, and it needs repairs, go to reel-to-reel forums and ask for opinions on the best repair shops for your brand and model. Ask about any negative experiences with the repair shop you are considering.

I had our resident Ph.D. electrical engineer, Dr. David Rich, advising me. If I had not had his advice, I would have been screwed because I might have ended up with a deck that has reliability issues. The Akai GX-625 is supposed to be one of the best consumer reel-to-reel decks that Akai manufactured. It is not a fancy deck with a lot of features. Perhaps that is why it is so good. Not many things to go wrong.

I found information stating that certain brands and models had reliability issues such as motors, capacitors leaking or exploding, etc. I had originally considered a deck with 15 IPS speed capability. I was told that such decks were used by radio stations and got heavy use, and thus, the heads are usually very worn (they look flattened) and may require what is called re-lapping, which means polishing them so that the surfaces are not flattened. Expensive to have done.

Here is a photo of the repaired GX-625 deck. 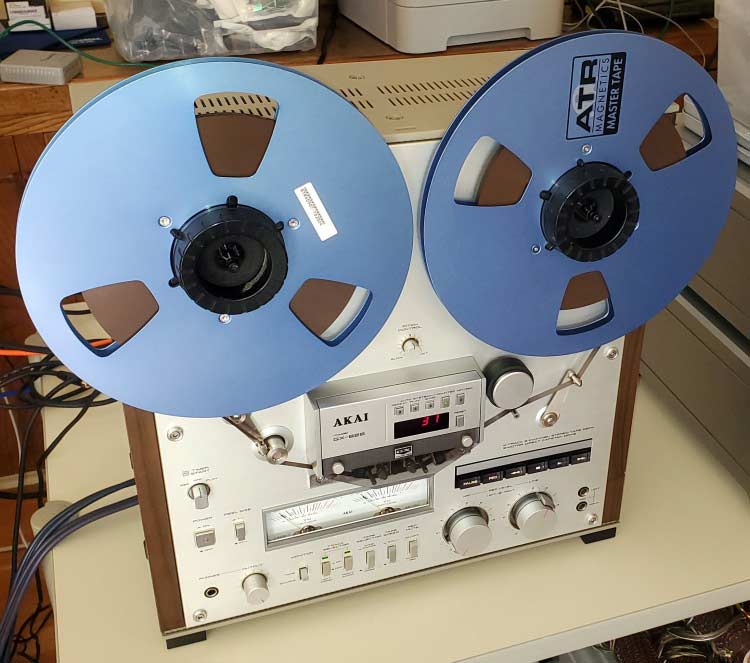 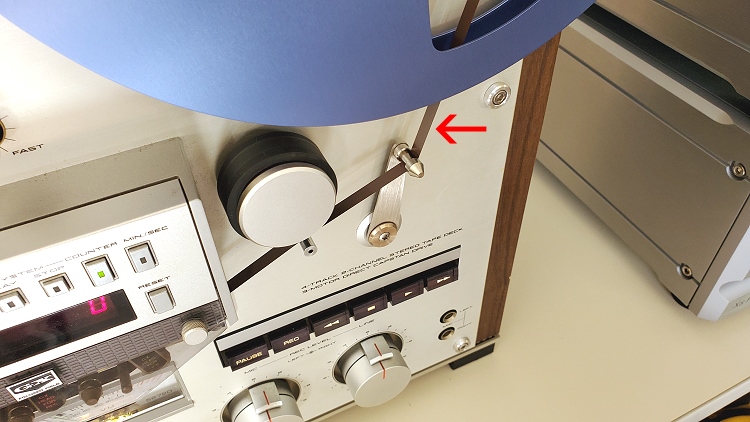 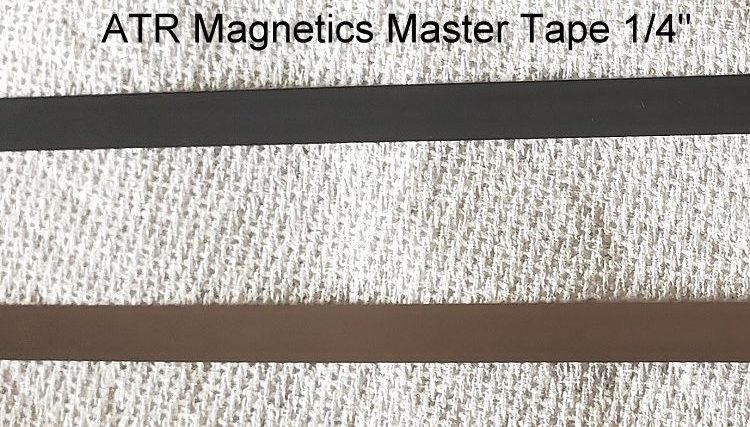 LPR35 tape from Mulann Industries also should have the brown side facing the tape heads.

March 16, 2021 – When using the deck, including winding and re-winding, make sure the tape is wound smoothly with no visible ridges of the edges of the tape (photo below). If there are visible ridges, this can cause tape damage over time. The ridges appear as an irregular surface rather than smooth. 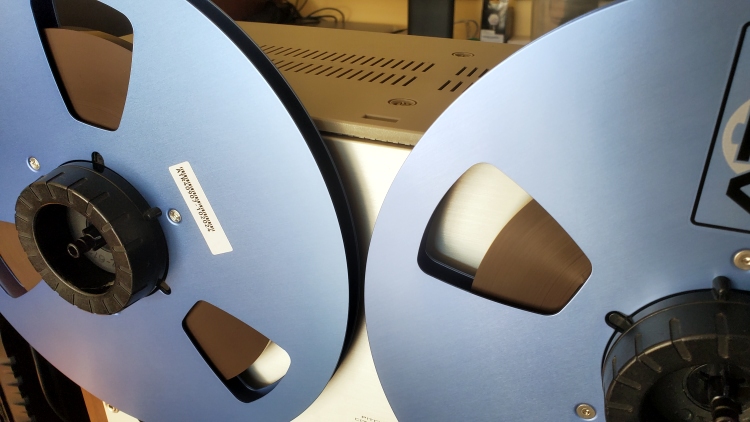 Here are some bench tests. I used the line-in and line-out RCA jacks on the rear panel. The phones output level control (red arrow) was turned up all the way. This is because that control affects the line-out as well as the headphones jack output. The left/right microphone input level (yellow arrow) was turned down all the way to reduce noise. The left/right line-input level (green arrow) was set to the desired dB VU when the test signal was recorded. 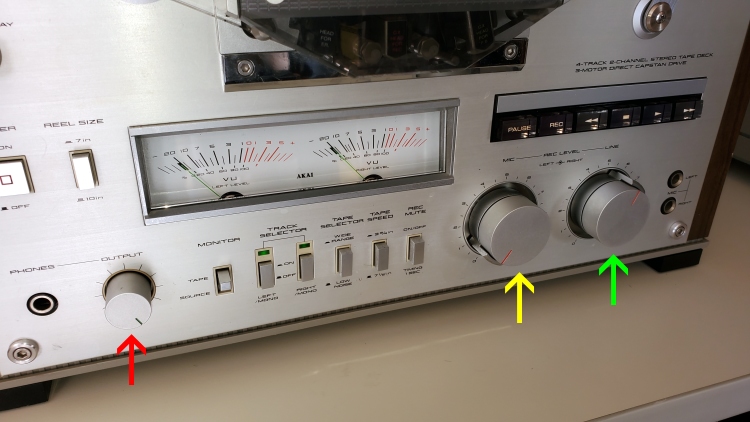 First a 1 kHz sine wave. The recording level was set at 0 dB on the VU meters (using the line input level control dial).

March 26, 2021 – I have had a number of phone calls about the name of the company where I had my tape deck repaired. It is as follows:

April 2, 2021 – Frequency Response (FR) of the source vs. off-the-tape is shown below. Tape deck specifications for FR are usually at minus 10 dB VU, so let’s start with that. First, the source. I used an Impulse Response (IR) to derive the Frequency Response. This is produced by sending a short frequency sweep from the low end to high (20 Hz to 48 kHz).

The FR is within about 7 dB between 20 Hz and 25 kHz. Distortion is high between 20 Hz and 35 Hz, and then it drops to between 0.1% and 1% for the rest of the FR. Notice that the highest signal output is in the midrange, between 100 Hz and 1 kHz. This may be what gives tape one of its desirable sound characteristic. Our hearing is most sensitive in this range. Also, the 2nd harmonic is the highest of the three harmonics measured here, i.e., 2nd, 3rd, and 4th. A high 2nd order harmonic is also a desirable characteristic.

For the 0 dB VU off-the-tape sweep (below), the FR is now within 12 dB, 20 Hz to 20 kHz, instead of the within 5 dB at -10 dB VU. The midrange region is, again, prominent. Distortion is also quite a bit higher than at -10 dB VU. I imagine this is why tape deck specifications are usually stated at -10 dB VU. The 2nd harmonic is the principle one even at 0 dB VU, which is good.

For the Tape spectra, notice a small bump at about 50 Hz. This is typical of tape. Impulse Response-derived FR for tape decks have not been published before, as far as I can find. Nor have 2nd, 3rd, and 4th harmonic data for the complete frequency response range.

April 13, 2021 – Shown below is a frequency response measurement made by using white noise instead of an impulse response. The recording level was at 0 dB VU. The yellow line is the source frequency response. It is underneath the sound card frequency response (green and blue lines), so it is a little difficult to see. However, below 20 Hz and above 30 kHz, you can see that the source response drops off below the sound card response. Also, because I used a high resolution FFT, the sound card response declines 5 dB from the high frequencies to the low, so you have to take this into account when evaluating the source and tape frequency response. The tape response is shown in the red line. The response is boosted in the midrange, but drops off starting at 500 Hz, with a rapid decline above 10 kHz. The decline is larger than the tape response using an impulse response. What this tells us is that when there are a lot of simultaneous frequencies, the high frequencies are recorded at a lower level than when the frequencies are presented one at a time for longer periods. The white noise signal is more like what we would have when music is being played rather than with an impulse response or with singular frequency test signals. The boosted midrange is probably why we like the sound of analog tape so much, along with a high frequency rolloff which reduces the sharp “edges” of the sound.