The Invisa HTR-7000 in-ceiling speakers are the top of the line GoldenEar has to offer for this product category. Having already created absolutely wonderful products that drive price/performance to new heights, the Invisa HTR-7000s are meant to compliment most of their current systems or stand on their own as great primary listening speakers. They feature the GoldenEar signature High-Velocity Folded Ribbon (HVFR™) tweeter and High-Definition Cast-Basket MVPP™, and have a range of 25Hz-20kHz with a 90 dB efficiency rating. Their grilles can be painted, making them blend in beautifully with the existing aesthetics of the room. 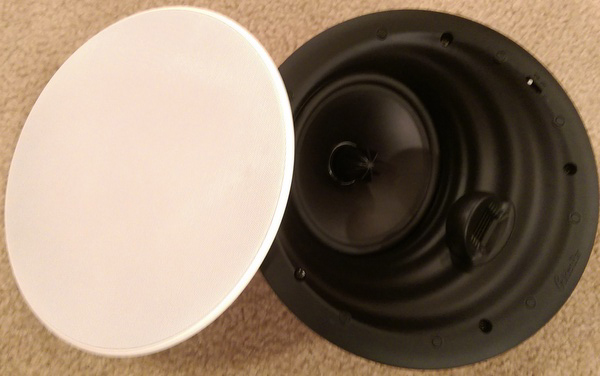 I haven’t had a ton of experience with in-wall/ceiling speakers in the past, but with the advent of Dolby Atmos for the home, the time has come to consider them. At first, I was going to look at mounting the GoldenEar SuperSat 3’s (which I use for the rear surrounds) on my ceiling. I reached out to Sandy Gross, the founder and designer of GoldenEar speakers, to get his opinion on this. Of course, he suggested the Invisa HTR-7000’s as they are clearly more suited to the task. He also mentioned that these are the speakers used in the booth demo at CEDIA this past September. After the “duh” moment passed through my head, I proceeded to have four HTR-7000’s installed for a full 7.0.4 channel Dolby Atmos-enabled theater configuration. Of course, it is important to review these speakers as both Atmos channels as well as standalone speakers as they can obviously be used in non-theater rooms as well. 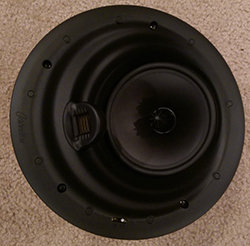 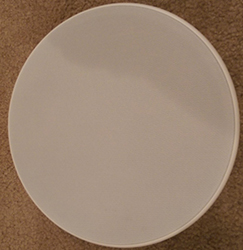 The Invisa HTR-7000 speaker is a 10” diameter circular speaker that when installed blends in perfectly with the ceiling or wall. The grill is nearly flush with the surface and can be painted to match the color of the wall or ceiling. I really love the understated, subtle look of the speakers when installed. They feature the GoldenEar High-Definition Cast-Basket MVPP™ mid/Bass Driver which is the same component used in their Aon 3 speaker. In addition, the signature High-Velocity Folded Ribbon tweeter (HVFR™) is here, which I know from prior experience with my other GoldenEar speakers, produces a wonderful sound. With a frequency response rating of 25Hz-20kHz and an efficiency rating of 90 dB, all indications are that these speakers are certainly capable of holding their own.

Here is the “before picture” to give an idea of what the ceiling looked like prior to the installation:

While I have experience constructing my own theater and doing all of the drywall work that comes along with that, I preferred to have the speakers professionally installed. The Invisa HTR-7000’s are angled so as to be able to direct them at the primary listening position rather than straight down. This is doubly effective because it allows them to be focused at that primary sweet spot in the theater, but also prevents directly radiating sound at people sitting right underneath them, which can be very distracting for movie viewing. I was actually surprised, at first, with how close the front and back speakers were to each other, but after reviewing the Dolby recommendations and understanding how they are to be positioned based on seating, it made a lot more sense. Dolby puts great information about this right on their website here: http://www.dolby.com/us/en/guide/dolby-atmos-speaker-setup/index.html

The GoldenEar Invisa HTR-7000 In-Ceiling Speakers In Use

Of course, the first thing I wanted to do once the setup was ready to go was to audition the Dolby Atmos trailers on the demo disc provided by our friends at Dolby. This reminded me of the days of yore when I got my first Dolby Digital demo disc and how ear-opening of an experience it was to hear for the first time. I can truly say that this was a similar experience! The immersion in the sound field now extends in a more natural spherical way. When done well, it truly adds a new level of enhancement to the experience of films and TV shows. But specifically speaking, how did the Invisa HTR-7000’s fit?

I am happy (and not at all surprised) to say that they performed fantastically. The clarity of sound is absolutely stunning. In one Atmos trailer, there is a maple tree seed that falls from a tree and as it does so you are intertwined with it. The rush of the wind and surrounding insect sounds seemingly come from everywhere. The Invisa HTR-7000s create a huge extra dimension above you that truly feels integrated with the traditional surround sound field. In another trailer there is a computer animated little girl dressed in an orchestra conductor outfit. As she raises her baton to begin, we hear jungle sounds from everywhere, including behind and above. The Dolby logo rises from the ground and she grabs a vine and begins swinging towards and past you, then again back from behind you to the front. The spatial locations of the sounds are fantastic, clear, and accurate.

Perhaps my favorite demo track is the Amaze trailer, which showcases natural storm sounds including thunder and rain. Rain is a perfect use-case for height channels because it comes from, well, above you. The first time I heard this trailer I was absolutely blown away. Closing my eyes, my ears were telling me that there should be rain hitting my body, but I could not feel it. The realism is almost scary. Perhaps the best compliment I can give speakers that create a surround field is that they don’t call attention to the fact that they are speakers at a certain location. I can easily say that about these Invisa speakers.

Of course, demo discs are perfect for showing off the capabilities of a system, but it is equally if not more important to perform with actual content. I tested these speakers with both Dolby Atmos encoded Blu-Ray discs, as well as standard surround encoded material that was then output as 7.0.4 channel audio by my receiver. This included other Blu-Ray discs, as well as some live sporting events with surround soundtracks. By and large, this works very well, especially for discrete 5.1, 6.1 and 7.1 multichannel mixes.

Dolby was kind enough to send me a copy of Transformers 4: Age of Extinction on Blu-Ray, which has a Dolby Atmos encoded soundtrack. Chapter 6 is a particularly great demo scene for Dolby Atmos, as Optimus Prime emerges from his barn hiding spot to save the Yeagers. As he explodes from the floor and subsequently blasts his way through the government agents, the detonations are all around you. The Atmos soundtrack truly adds an immersive experience. The Invisa HTR-7000s match perfectly with the other GoldenEar surround channels to create a truly seamless sound field. Not only are the explosions accurately tracked from front to back and around your head, but even some of the music effects make use of the extra channels in a particularly effective manner. As the four heroes escape into a fantastic Transformer-rific chase scene it culminates with their attempt to get away from the vicious alien transformer, Lockdown, who throws an immensely damaging bomb-like weapon at them. In typical Michael Bay fashion, the scene transitions to slow motion, with the sound effects amplified to enhance the moment. With the crystal clear effects pulsing all around me, I was enthralled by the performance of the system as a whole, and the Invisas in particular. Not only the explosions themselves, but the subtle detail of the fire burning all around was reproduced flawlessly.

Next, to test a non-Atmos high resolution soundtrack, I selected one of my favorite films of 2014 – Guardians of the Galaxy. One of the best scenes from this movie is the Guardians’ escape from the Kyln. As they battle to get to the control tower, the prison drones are flying in circles around the room shooting at them. Again, without specific Atmos encoding, I was curious as to how well the decoding would accurately place audio in the Invisa channels. Laser blasts and the whoosh of the thrusters spun around and above me as I would have hoped. Later, as the Guardians are trying to escape Ronan’s and Nebula’s grasp on Knowhere, the sound of the ships whizzing about through the industrial complex was fantastic and enveloping. Even as I cranked the volume towards reference level, the Invisa HTR-7000s maintained their tight, clear sound without wavering. They were truly up to the task.

Obviously, Dolby Atmos is only one application for these speakers. I went ahead and configured a pair of the Invisa HTR-7000s as my left and right main channels and set my receiver to stereo so I could test them out as primary music listening speakers. I started with some music from Trey Anastasio’s self-titled debut solo album, which features a full band including a horn section in addition to the traditional bass, guitar, and drums, making it an excellent album for testing. I was extremely impressed (though not surprised) with the sound stage created by just the HTR-7000s. They are rated to go down to 25 Hz as well, and they certainly did hold their own with the funky basslines put down by Tony Markellis. The horns sounded fantastic as well – reproduced by the Invisas without any harshness.

Next, I moved to some classical music, choosing Edvard Grieg’s In the Hall of the Mountain King as performed by Sigurd Jorsalfar and the Gothenburg Symphony Orchestra. Not only do I love this piece of music, but as it features both pianissimo and fortissimo passages, it is great for demoing speakers. The HTR-7000s conveyed both very well. I was able to hear the subtle detail of the strings at the beginning, and as it built, the clarity was maintained without any distortion. The loud crashes of the cymbals came across perfectly. This particular rendition also includes the choral portion performed by Gosta Ohlin’s Vocal Ensemble, Pro Musical Chamber Choir. The vocals came out wonderfully balanced with the rest of the music. I was quite pleased with the performance of these Invisa HTR-7000s.

The fact that these speakers are aimed at the listening position certainly contributed to accuracy of the imaging when in “front” of their firing range. However, as I walked around the room there was a definite drop off in volume and imaging as I moved “behind” them. Again, these speakers were installed specifically for Dolby Atmos and are thus aimed as recommended for that application. I have no doubt whatsoever that should they be intended as primary listening in-ceiling speakers, they would be configured differently (likely in the corners of the room) and would provide an amazing listening experience from any point. 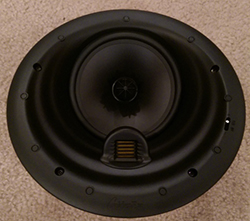 Having gone from never owning a pair (let alone 2 pair) of in-ceiling speakers, I was definitely unsure of the value I’d be adding to my system, but decided to take a chance anyway. I am extremely pleased I did. Of course, the primary function of my Invisa HTR-7000s will be for Dolby Atmos/Surround in my home theater, I would have absolutely no problem additionally purchasing some down the road as primary listening speakers in another room of my home. I was truly stunned by how fantastic they sounded; particularly with the historic “bad rap” that many in-wall/ceiling speakers get in terms of what they can’t do. Well, I have told you what these speakers CAN do, and I highly recommend them for anyone considering this type of speaker for your needs. The GoldenEar speaker line continues to grow, and with each new one, they have consistently constructed high performing, high value speakers that are simply fantastic. The Invisa HTR-7000s are just that.