Up NextSVS Ultra Bookshelf Speakers Review
For those consumers who want to start building a stereo audio system with an eventual home theater planned, there are some bookshelf speakers out there that will help, and they will have the word “Budget” in mind.

Everything is expensive these days. Cheetos® are $9 a pound at our local grocery store. Nine dollars a pound for corn chips.

The world of A/V is not immune to this. The prices are a reflection of the cost of fuel to transport products to stores and consumers, and the cost of parts that also have to be transported to factories. Parts come from all over the world.

For those of you who want to start building a hi-fi rig, with a home theater down the road in mind, where do you begin looking?

Getting a pair of speakers is a challenge. You don’t want to waste money getting something that you might have to take to the E-Waste pile when you expand your system.

You can spend a ton of money on speakers but now is not the time if you are just starting out.

Bookshelf speakers (stand-mounted) are a good arena for consideration. They won’t cost as much as the same product line in a floor-standing model. They won’t take up a lot of space. You can use them as surround channel speakers when you put together a home theater.

I took all these things into consideration when I decided to start reviewing items for newbie audiophiles. Focal came to mind. They are an excellent brand, and their speakers are built in France.

MDF with veneer on sides
Ported 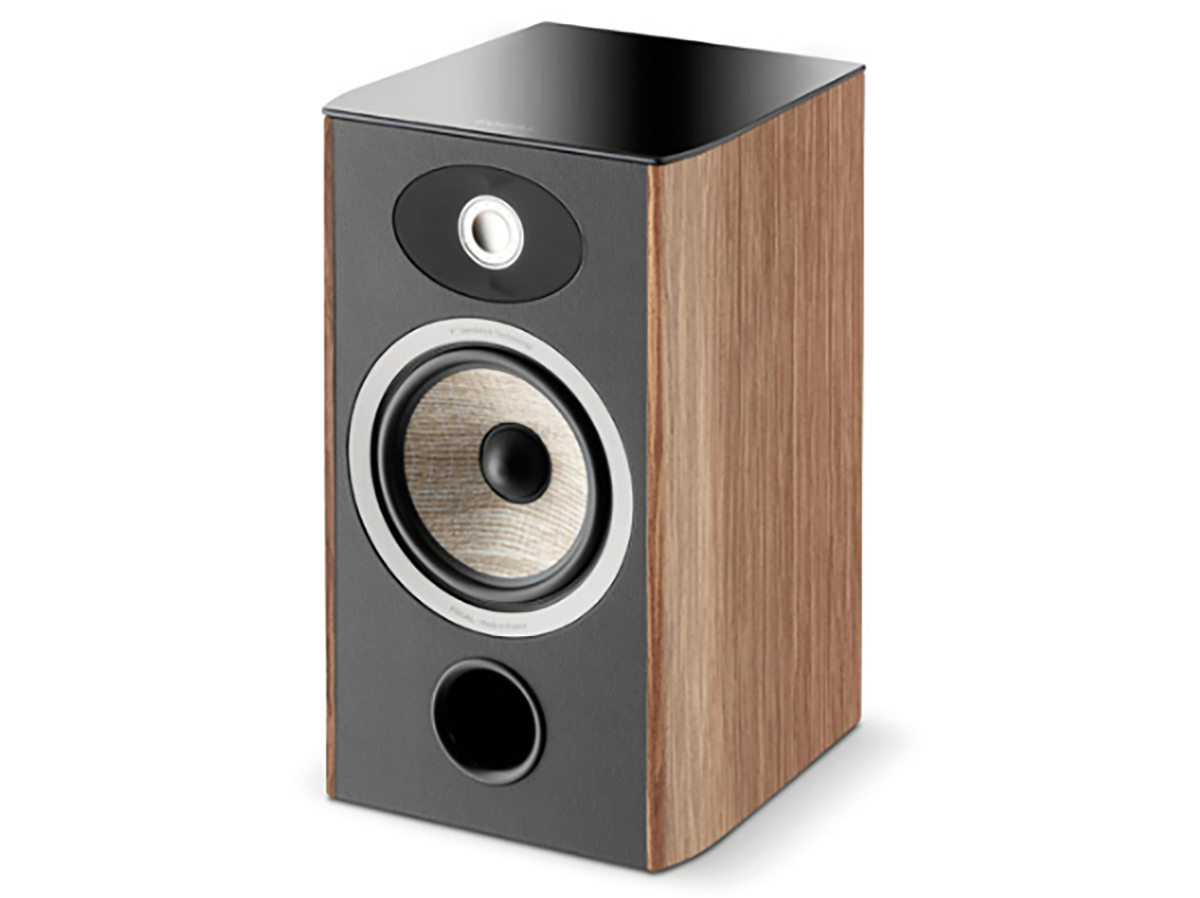 The tweeter is a 1” aluminum/magnesium inverted-dome design. Inverted domes are said to have better control of sound compression. The mid-bass driver has a 6-1/2” flax-fiberglass cone. The enclosure is ported and has a real walnut veneer, and you can choose other finishes as well. The review pair arrived with the walnut finish. 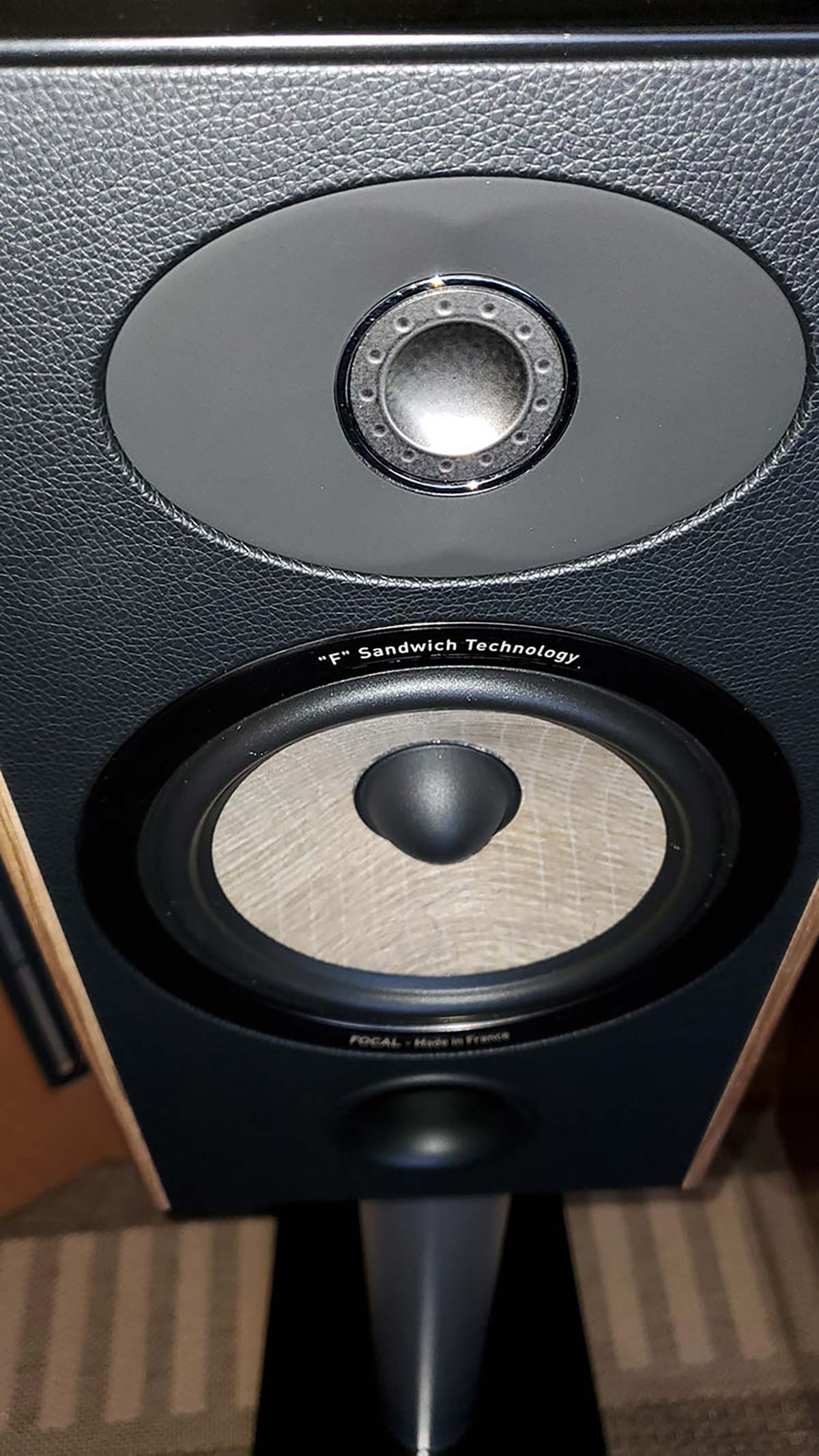 You can see that the mid-bass driver cone material is quite unique. 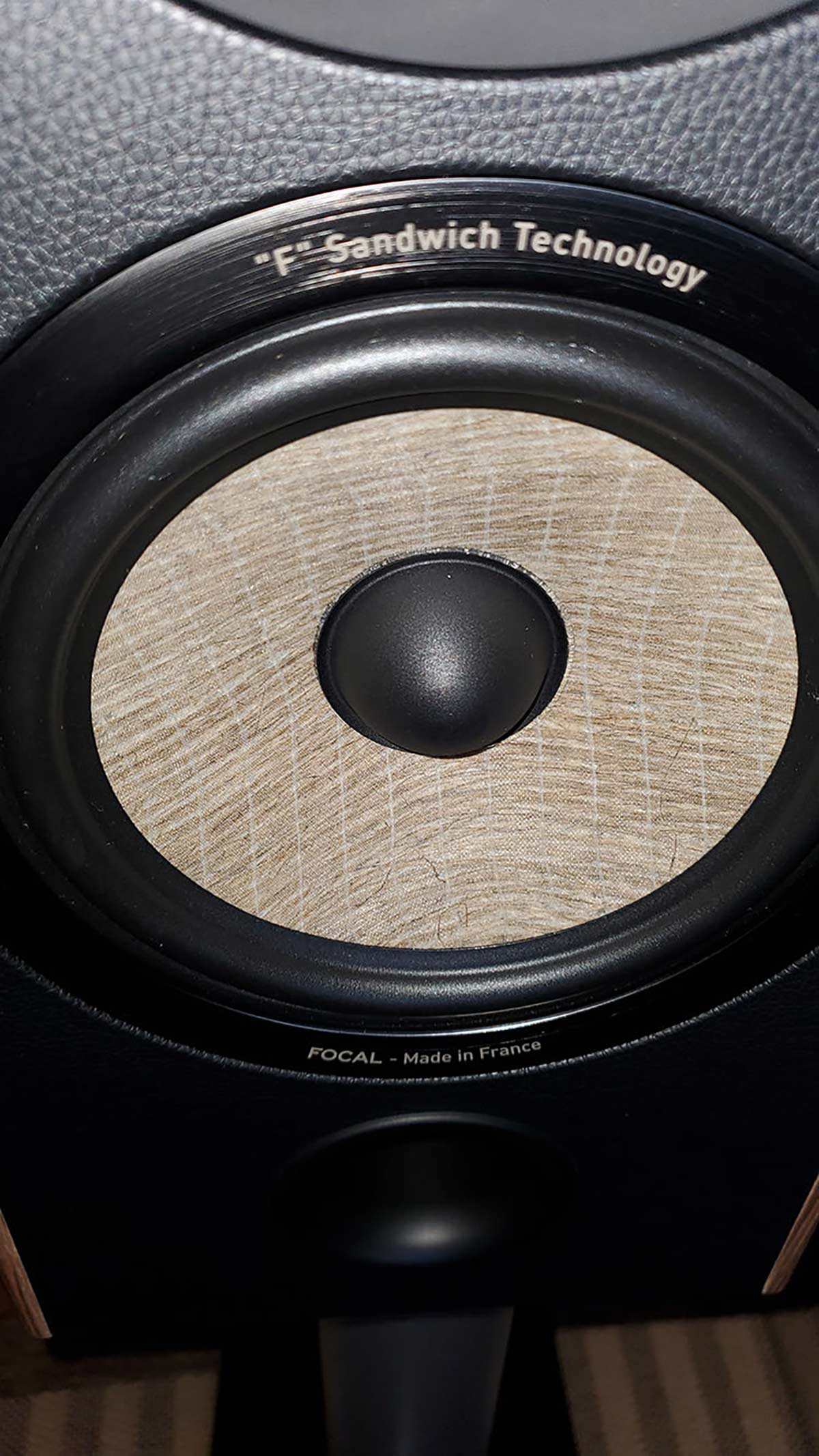 The binding posts are plastic with plugs that can be removed for use with banana plugs. There is no provision for bi-wiring or bi-amping, but that is not really necessary for such small speakers. You can see an opening at the top of the stand where the cable would exit in case you want to have the speaker cable run through the inside of the stand. 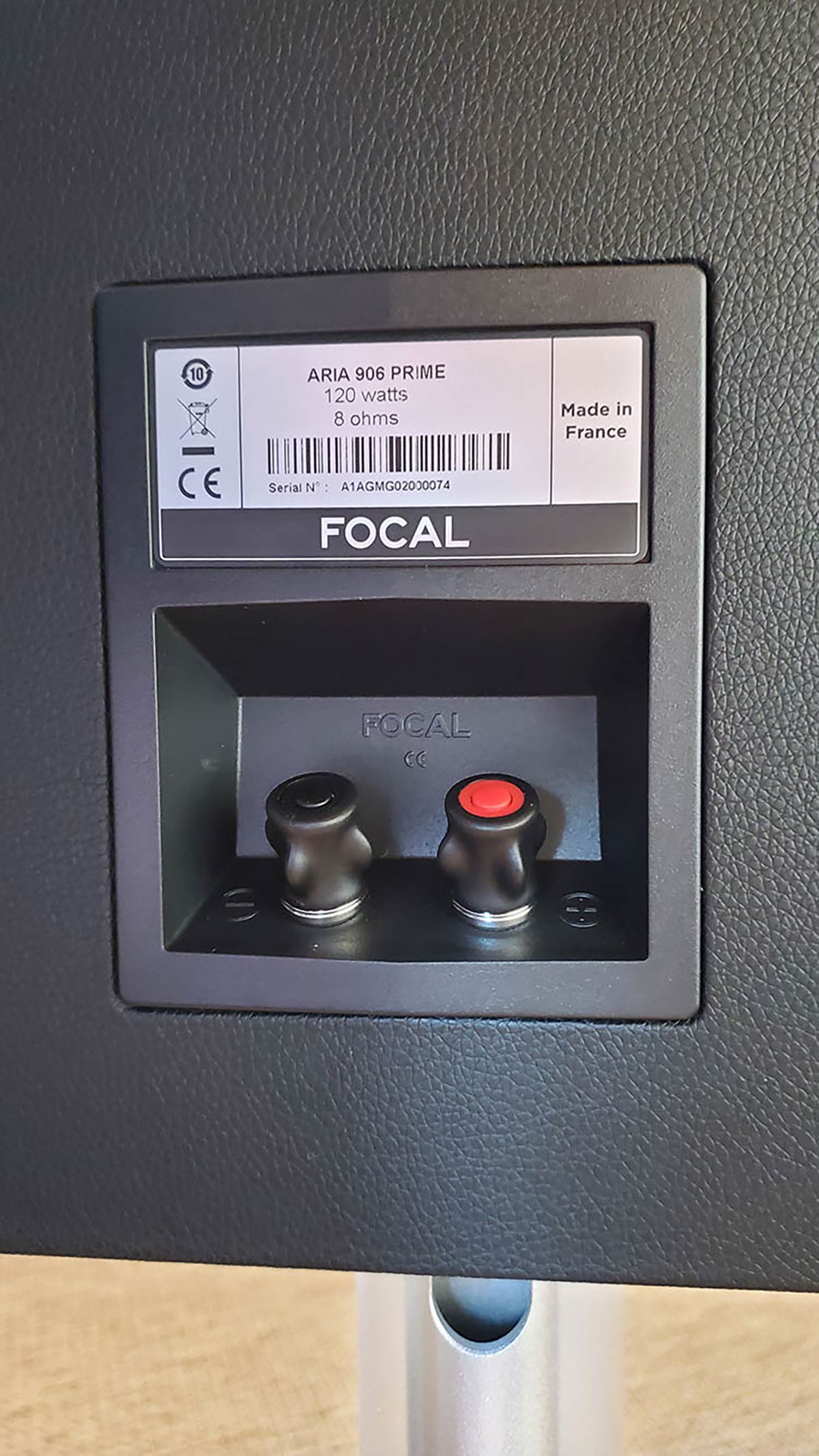 At a cost of $2,198/pair, the ARIA 906’s are not the cheapest on the block, but if you go really cheap, you might very well be disappointed and have to discard them down the road.

A set of the Focal S-900 speaker stands arrived with the speakers. They are designed specifically for the ARIA 906 speakers and are a good idea since you will likely need stands. They can be placed to the side or rear later on if you want to get large speakers for the front left/right channels for your home theater. They are priced at $589/pair. Less expensive speaker stands are available from various sources. 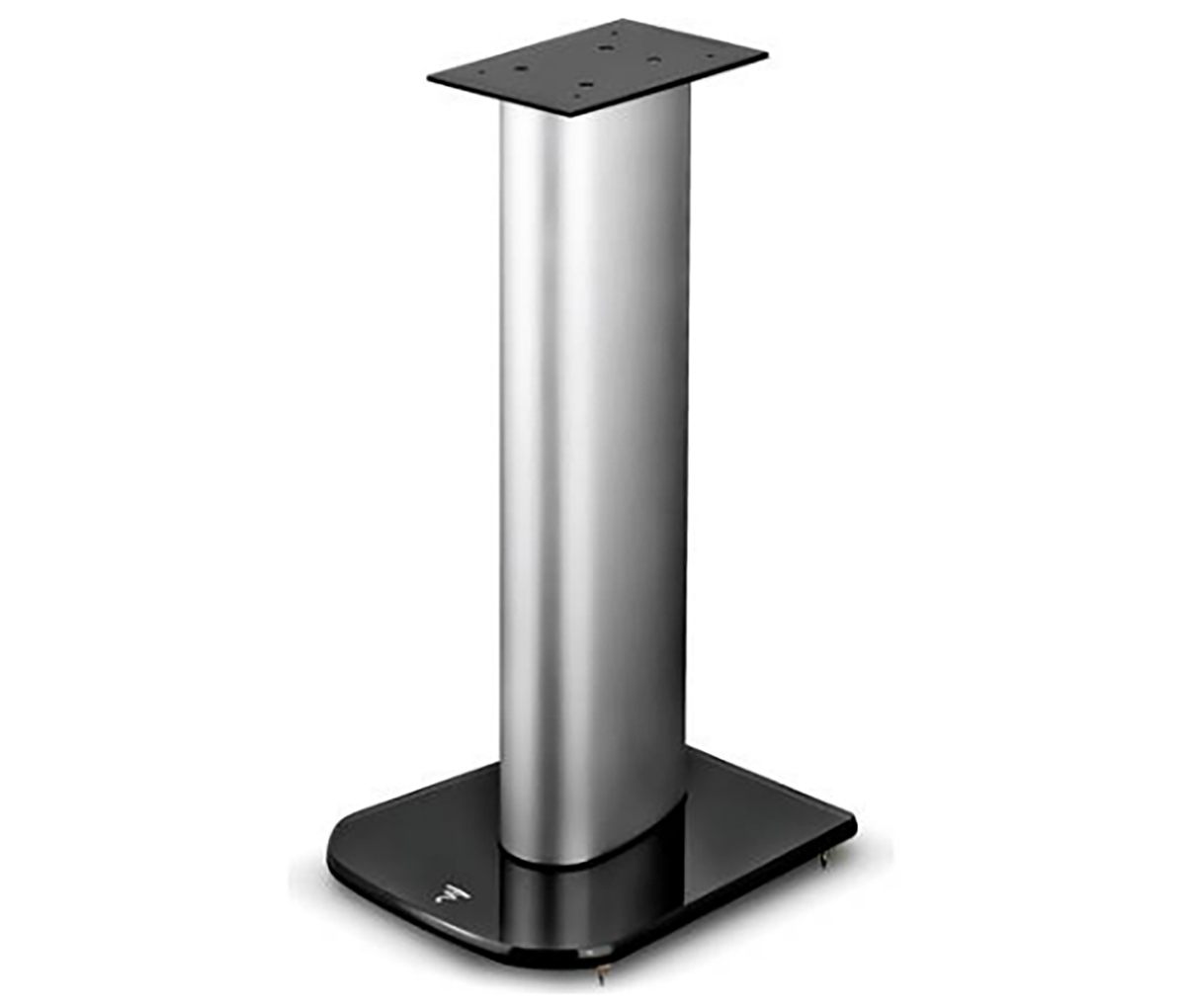 For the review, I used a Win 11 laptop feeding the DAC, via USB, in an AURALiC ALTAIR G1 Digital Audio Streamer. The DAC’s balanced analog outputs were connected to a Bryston BR-20 Stereo Preamplifier. Power amplifiers included Pass Labs Xs 300 Monoblocks, Starke Audio Fiera4 four-channel Class D (also under review), and Parasound JC 1+ Monoblocks. Cables were various. The speakers were placed about 8’ apart and toed in. I sat about 10’ from the speakers. Bench tests were performed with a calibrated microphone placed 1 meter from a speaker on-axis. 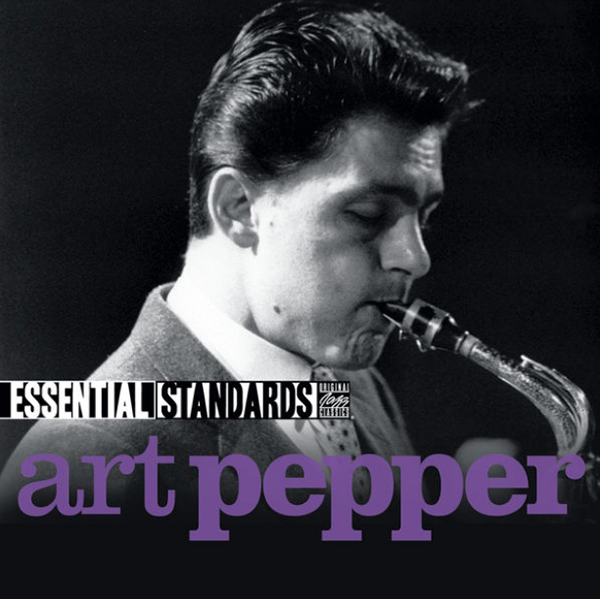 Essential Standards, Art Pepper
This album has great tracks from various other albums. My favorite track is “You’d Be So Nice to Come Home To”. I use it a lot in my reviews because I know how it should sound, and it sounded great with these small speakers. Not a huge sound that it has with big floor-standers, but that is expected. However, it was clear and detailed. The 906s have a slight brightness to them, and this is due to the metal dome tweeter. It is a matter of preference to listeners. Focal is known for this type of treble. There is more edge detail with metal than would be the case with a soft silk-dome tweeter because metal is stiffer than silk and will flex less, so the transient edges are sharper. Again, it is a matter of preference. Silk domes are smoother.

There is an abundance of bass, more than I expected. The 6-1/2” mid-bass driver here is amazing. I would suggest adding a subwoofer though and setting the crossover to about 75 Hz. I will talk about this later.

As you will see in the bench test section, the response is quite flat, with a bit less midrange than bass or treble. You can easily modify this with room correction software that is present in so many processors and receivers these days. You can also modify it in digital music software players that have EQ available. I use Amarra and Audirvana digital music players and MAAT linear EQ plug-ins with my laptop outputting digital streams to my audio systems via USB. My SSP has Dirac Live room correction. 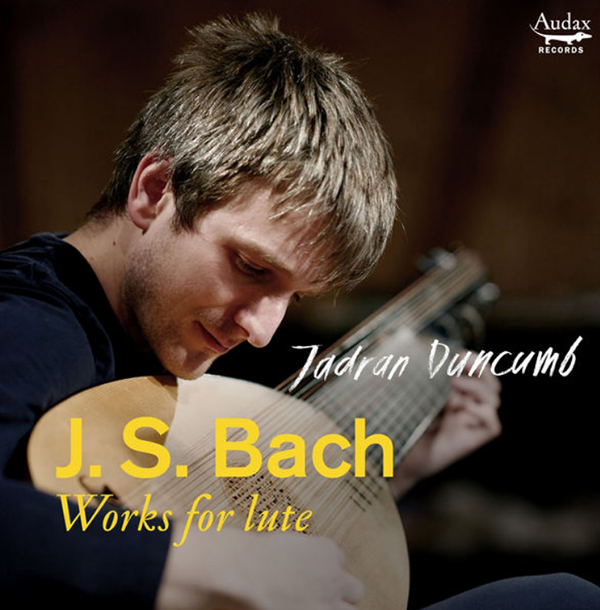 Works for lute, J.S. Bach
Lute and guitar are good tests for all kinds of audio equipment because of the edge transients. This particular album is no exception, and Jadran Duncumb’s skills on this beautiful instrument also make it worthwhile just to listen to the music. The edge “twang” was quite clear. 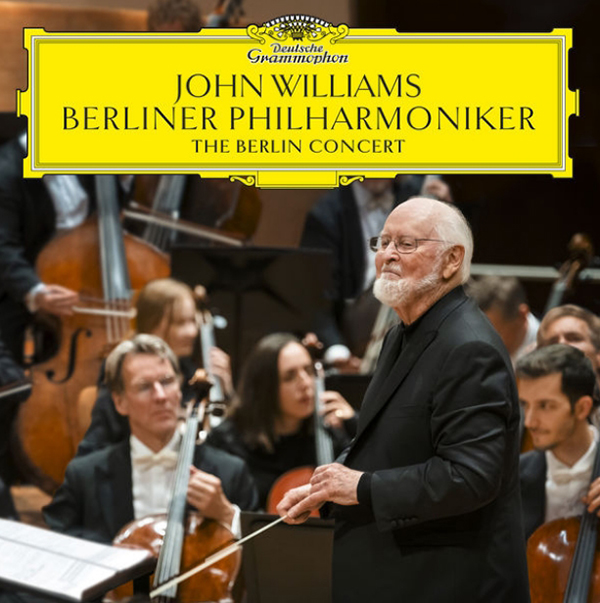 The Berlin Concert – Berliner Philharmoniker, John Williams
This is a relatively new album and is available on Qobuz with 24/192 sampling. It has themes from various movies that Williams scored, including Star Wars, Indiana Jones, and Jurassic Park. It is truly a fabulous album, and I earmarked it in my Favorites folder.

I continued to be surprised at the amount of bass this speaker produces. And an amazing overall loudness with clarity maintained. 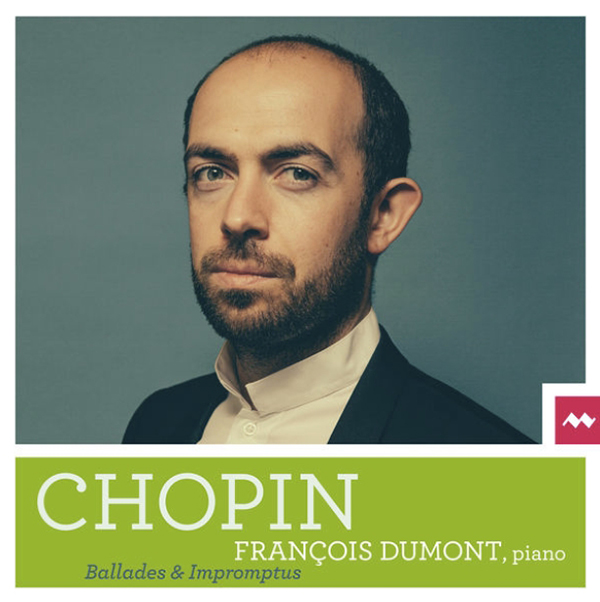 Chopin – Ballades & Impromptus, François Dumont
Another terrific new release by a fantastic pianist playing music from one of my favorite classical composers.

Piano is good for listening tests because there can be 10 notes played at the same time, although with Chopin, that doesn’t happen frequently, at least with Ballades and Impromptus.

Nevertheless, the piano sounds excellent on these speakers. Very natural tonality, which is what I was looking for, and this is a testament to their relatively flat response. 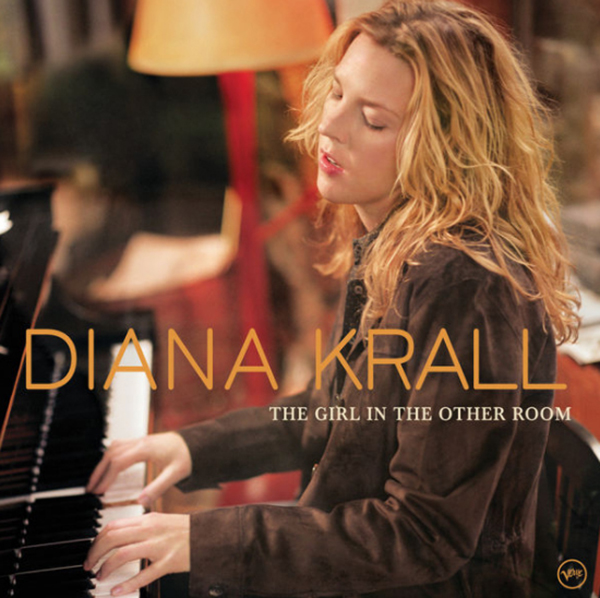 The Girl in the Other Room, Diana Krall
Diana Krall has the perfect female jazz voice, and it is on perfect display in this album. I have listened to her so many times, I know if there is the slightest inaccuracy with new equipment. Bookshelf speakers do voices really well because the instrument (vocal) is small too. Floor-standers can sometimes make a voice sound too big.

I was surprised overall at how well these babies performed, but I feel that the mid-bass driver is being asked to do too much. Perhaps a small cap to roll off the bass sharply below 70 Hz. I know that would induce some phase shift, but that is not quite so noticeable in the very low frequencies. However, if you have room correction, this can easily be accomplished in the preamp or processor. If your preamp or processor has tone controls, then simply roll off the bass below 70 Hz. 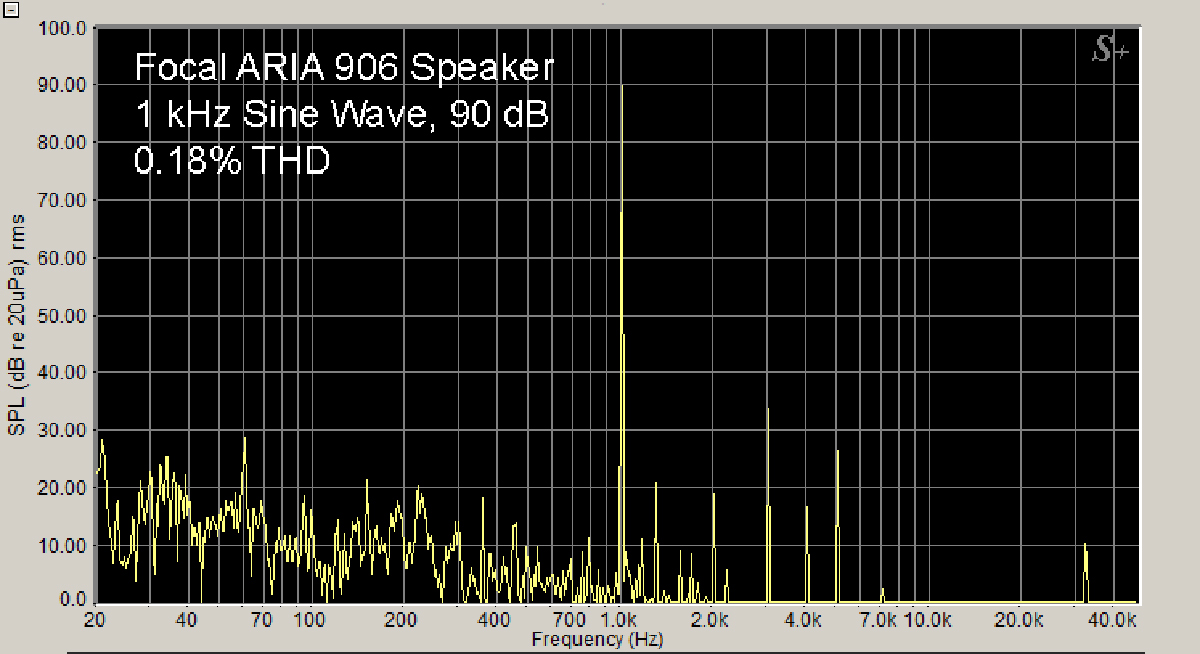 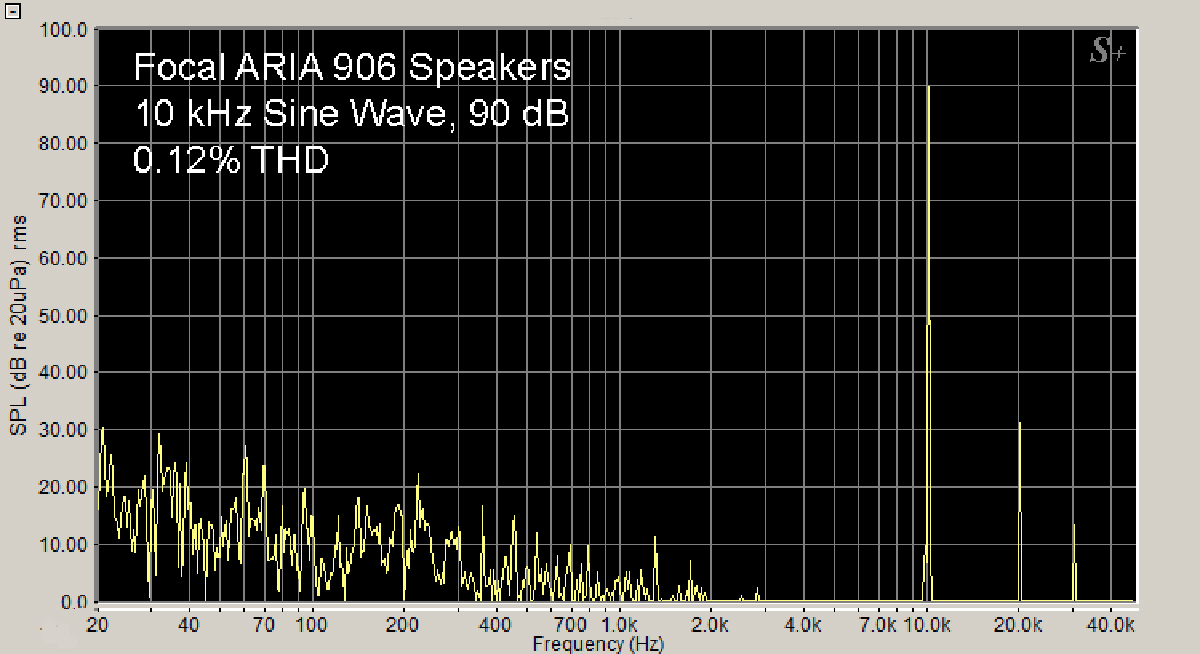 Let’s take a look at the mid-bass output.

At 50 Hz, distortion was nearly 2%. I had left the volume control at the same level as for the 10 kHz test, and the output was 86 dB. I decided not to try and increase it to 90 dB. 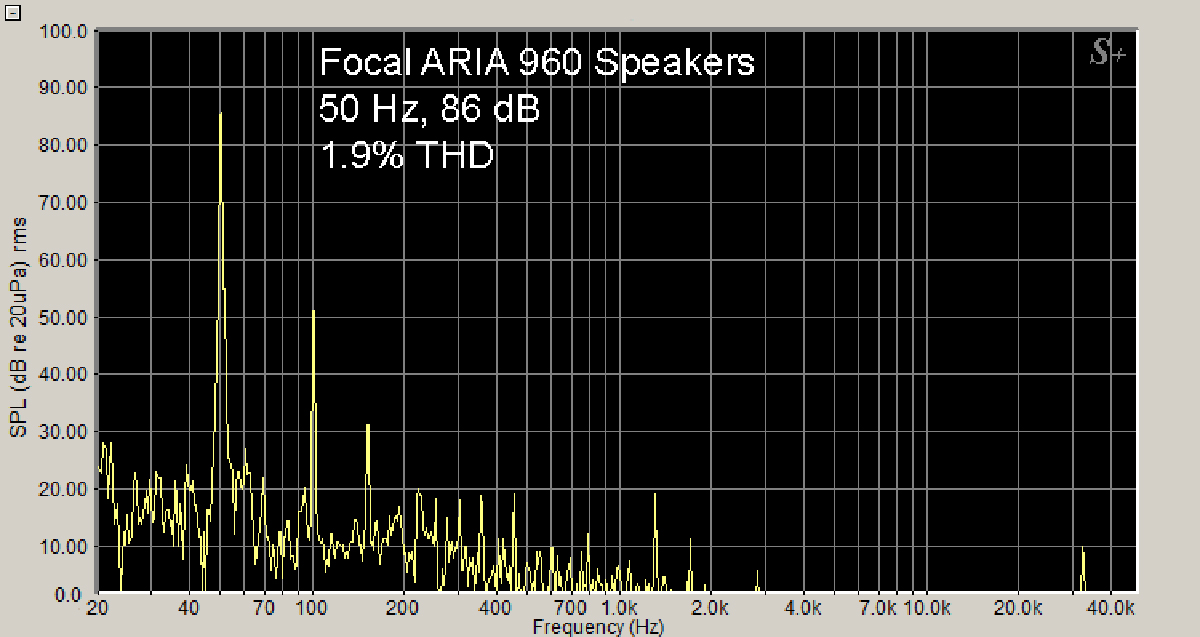 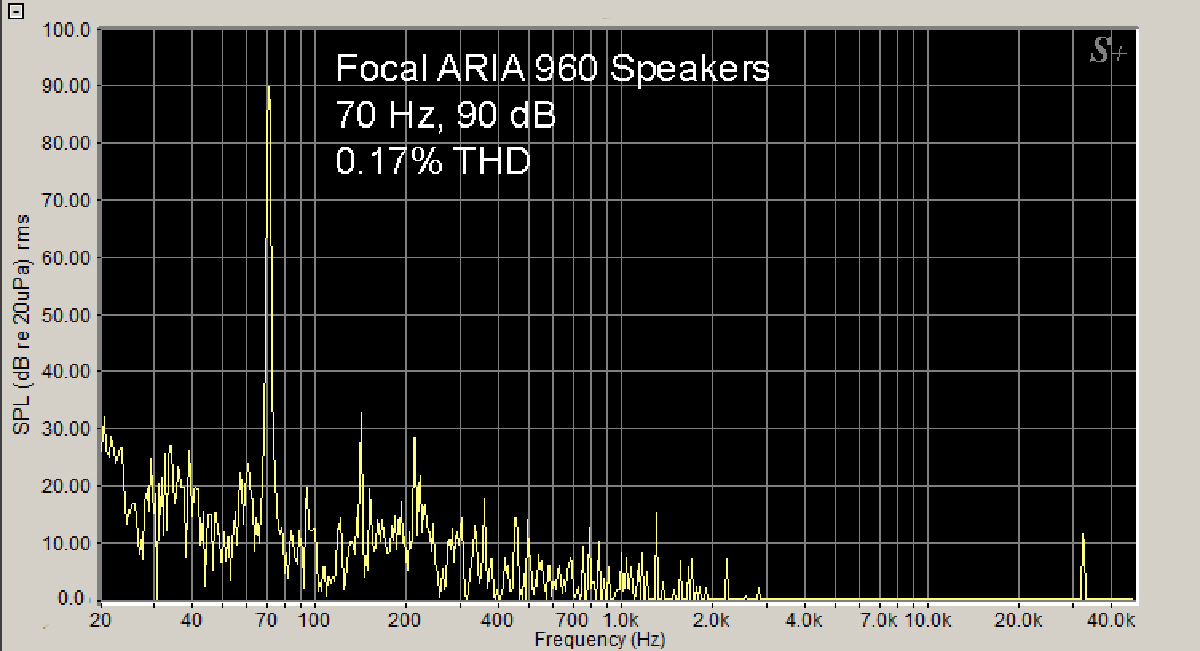 A Frequency Response sweep at 75 dB (average) output shows a relatively flat response with room effects included. It tends to increase above about 16 kHz. 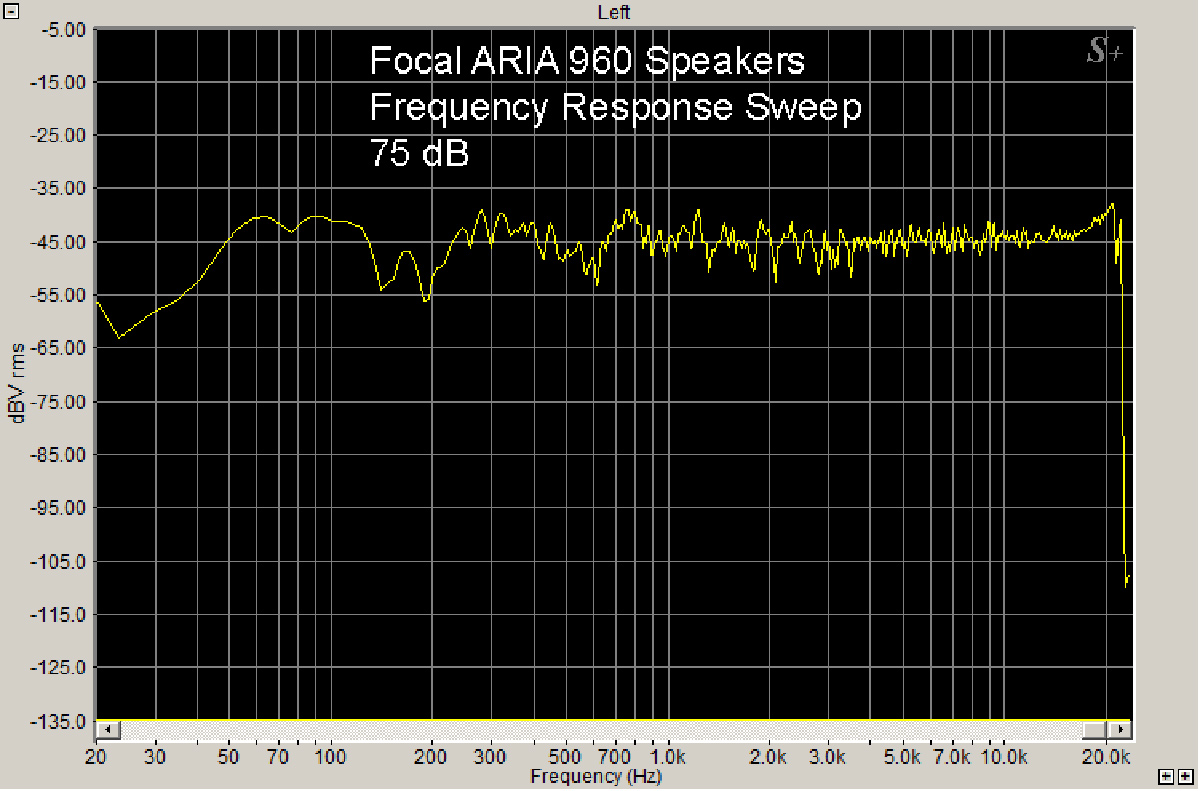 The Frequency Response derived from an Impulse Response is shown below. The volume is around 87 dB SPL. The IR-derived response greatly reduces the effects of the room. It shows a slight roll-off in the midrange and a sharp drop below 60 Hz. This is why I suggest using a subwoofer with the crossover set to about 75 Hz. In fact, I subsequently, stupidly, and accidentally input a very loud test signal that included low frequencies which resulted in the mid-bass driver failing.

Distortion is higher than with single sine wave tests because the drivers are constantly having to alter the push and pull of the cone from previous frequencies that are still playing when the frequency is changed.

The speaker Impedance and Phase response are below. The impedance is low in the bass which is why the driver outputs so much. The low is 4.5 Ohms at 200 Hz. In the treble, the impedance peaks at 32 Ohms at 2.4 kHz. This reflects the slight attenuation in response in that range. The phase reaches a high of +52o at 1 kHz, and a low of -41o at 120 Hz. 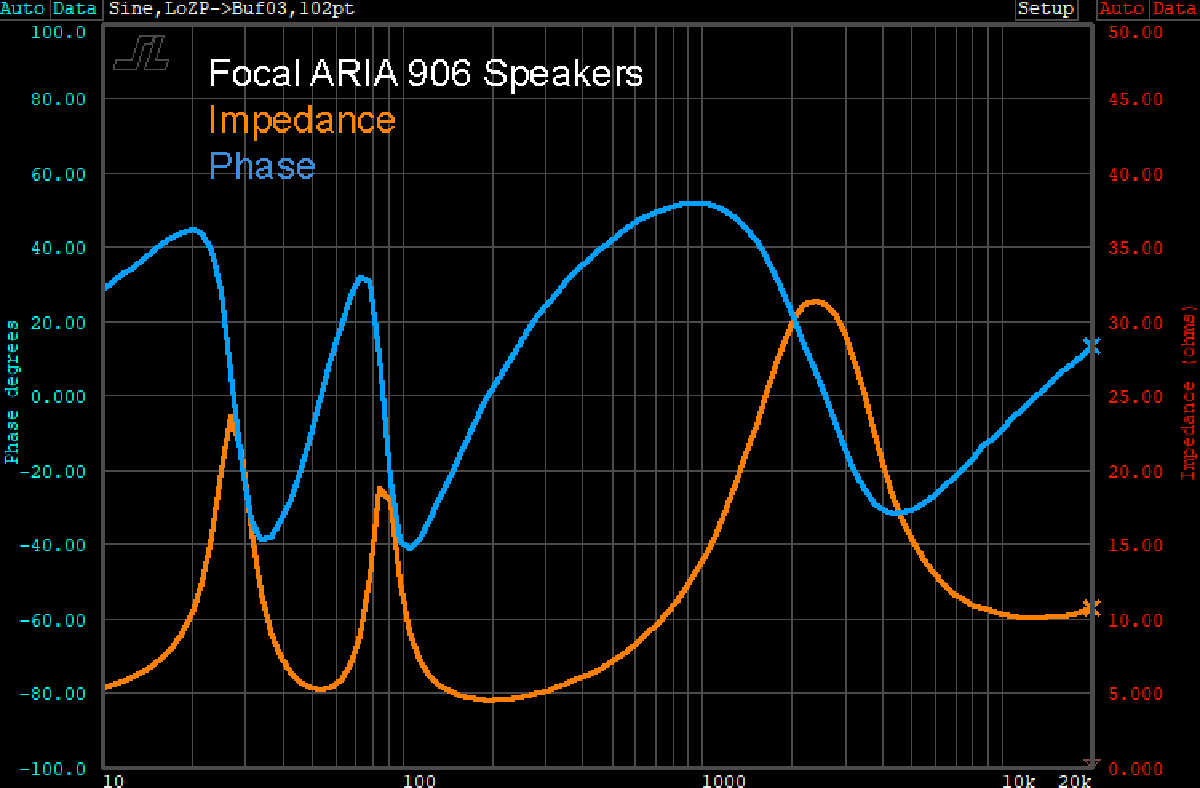 Focal has a winner with their entry-level ARIA 906 Bookshelf/Stand Mount speaker.

It has a full-bodied sound with a flat room response which can easily be modified with room correction software. They would make a great first purchase for a new-Audiophile stereo system.