Although everything seems to be getting more expensive, there are still some things that are a true value. SVS Ultra Bookshelf Speakers are in that category.

If you are just starting out in building a stereo system with home theater in mind for the future, you should consider bookshelf speakers. Although you can actually put them on bookshelves, this will result in less than satisfactory performance due to reflections from the wall behind the speakers and the shelves themselves. So, put them on speaker stands.

SVS Ultras are not cheap (you can get a pair of powered small speakers and a subwoofer designed for use with your computer all for less than $100), but they are not very expensive either, at $1,200/pair. In fact, I consider them a bargain for what they deliver.

The SVS Ultra Bookshelf Speakers are their best quality model of bookshelf design. Although they are called “Bookshelf”, they are really supposed to be stand-mounted because if they were sitting on a bookshelf, the upper and lower shelves would cause some interference along with serious reflections from the wall behind the shelf. This is the case for any quality bookshelf speaker. 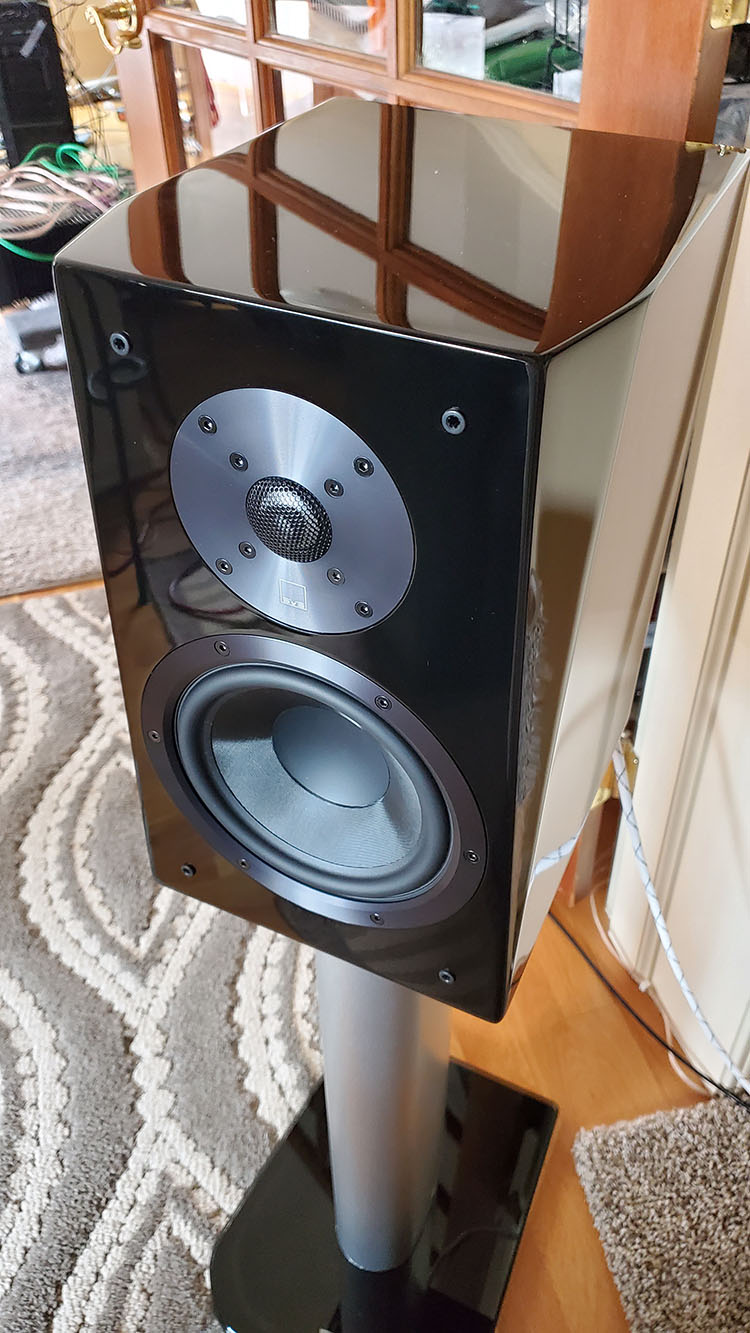 The tweeter is a 1” aluminum dome, protected by a metal mesh. The mid-bass (woofer) has a 6.5” fiberglass cone. The enclosure is ported on the rear. You can choose a real oak veneer or gloss black. I received the gloss black. 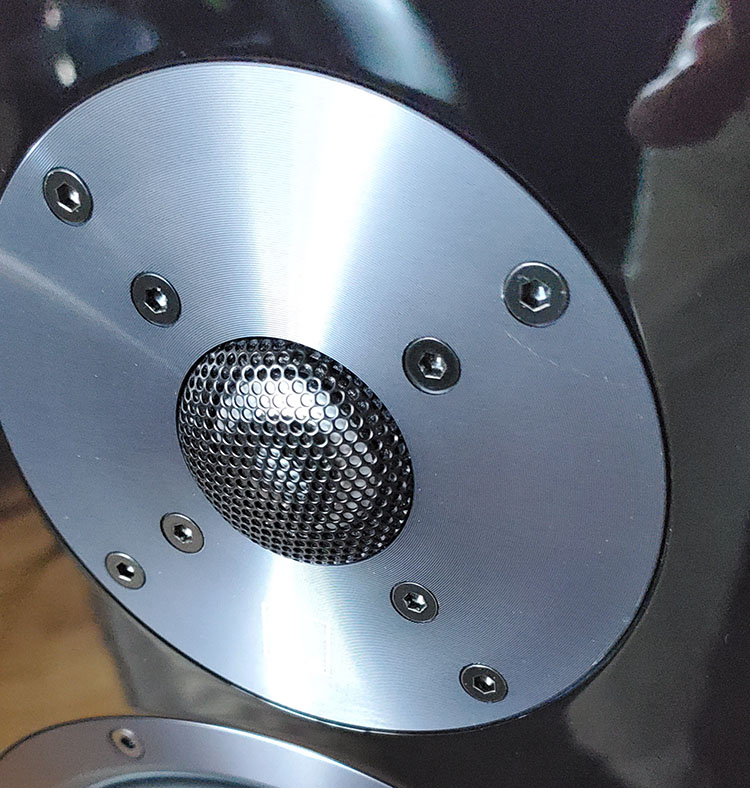 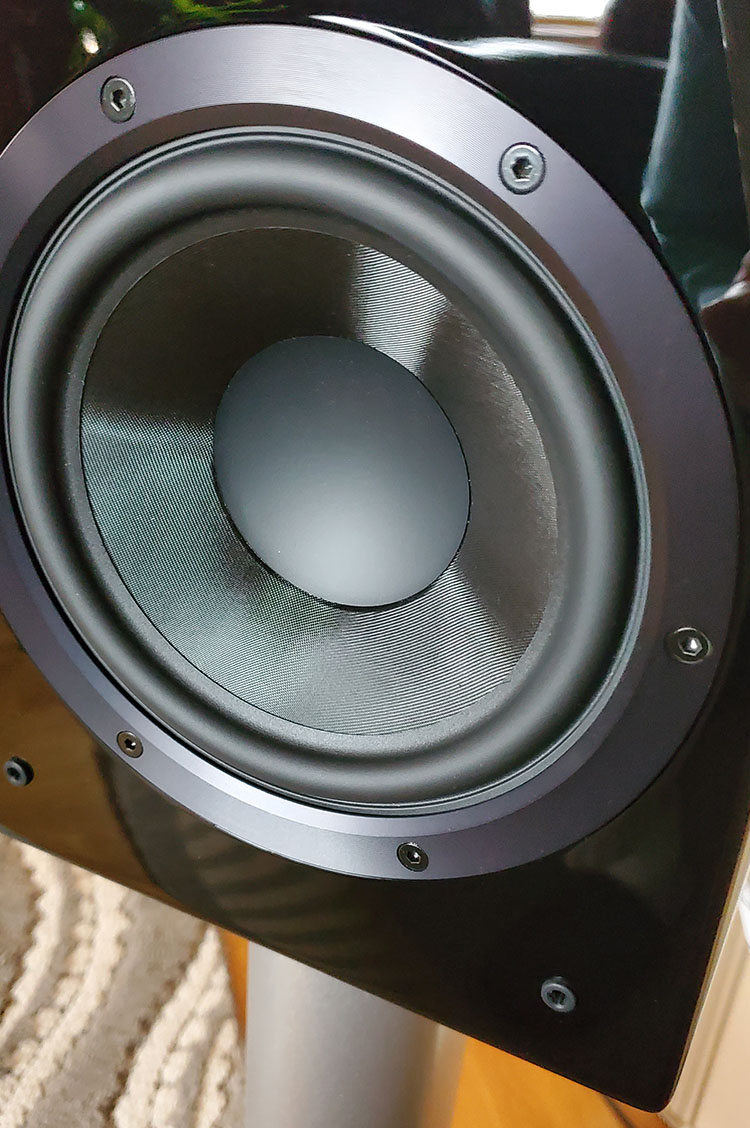 The binding posts for the tweeter and woofer can be separated for bi-wiring and bi-amping. The port is also on the rear.

In the photo of the rear of the Ultra, shown below, you can see reflections of several items in my listening room. This illustrates the gloss black finish includes the rear. They are truly beautiful. 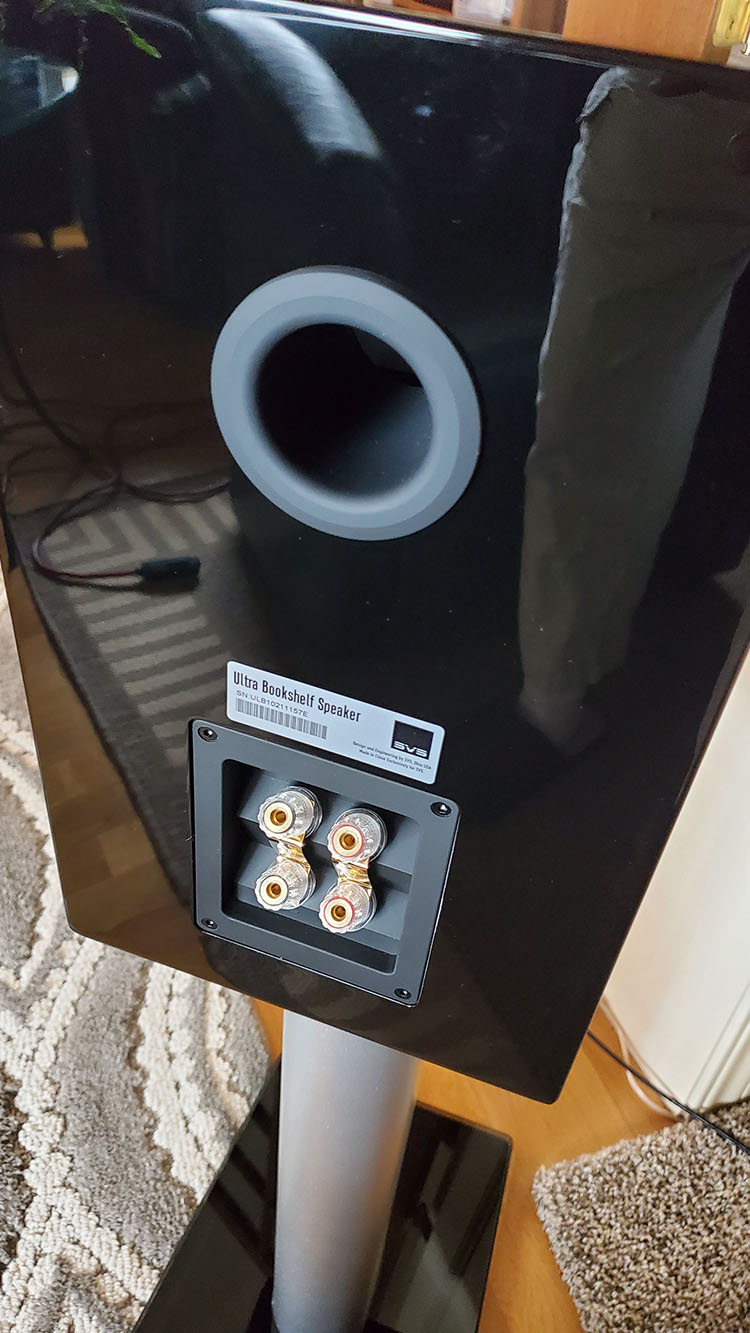 The speakers have non-parallel surfaces to reduce internal reflections.

For the review, I used a Win 11 laptop feeding the DAC via USB in an AURALiC ALTAIR G1 Digital Audio Streamer. The DAC’s balanced analog outputs were connected to a Bryston BR-20 Stereo Preamplifier. Power amplifiers included Pass Labs Xs 300 Monoblocks, Starke Audio Fiera4 four-channel Class D (also under review), and Parasound JC 1+ Monoblocks. Cables were various. The speakers were placed about 8’ apart, toed in. I sat about 10’ from the speakers. Bench tests were performed with a calibrated microphone placed 1 meter from a speaker on-axis. 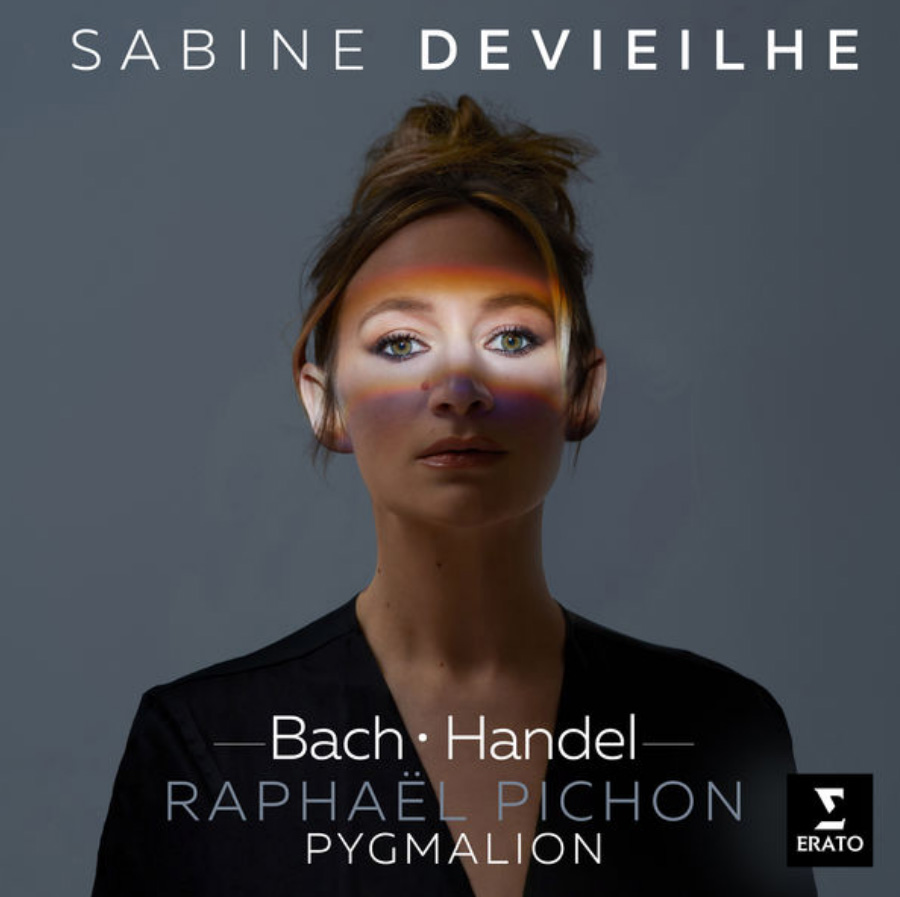 Warner Classics – November 5, 2021 – 24/96 sampling on Qobuz. I have not heard this soprano (Sabine Devieilhe) before, and wish I had. What an extraordinary voice. The SVS Ultras served her perfectly. The human voice is perhaps the most familiar sound to us because we hear it every day. She applied her talents to compositions by Bach and Handel who are Baroque Period composers. The music may not be everyone’s preferences because it is so “formal”, but the audio would be a delight notwithstanding. 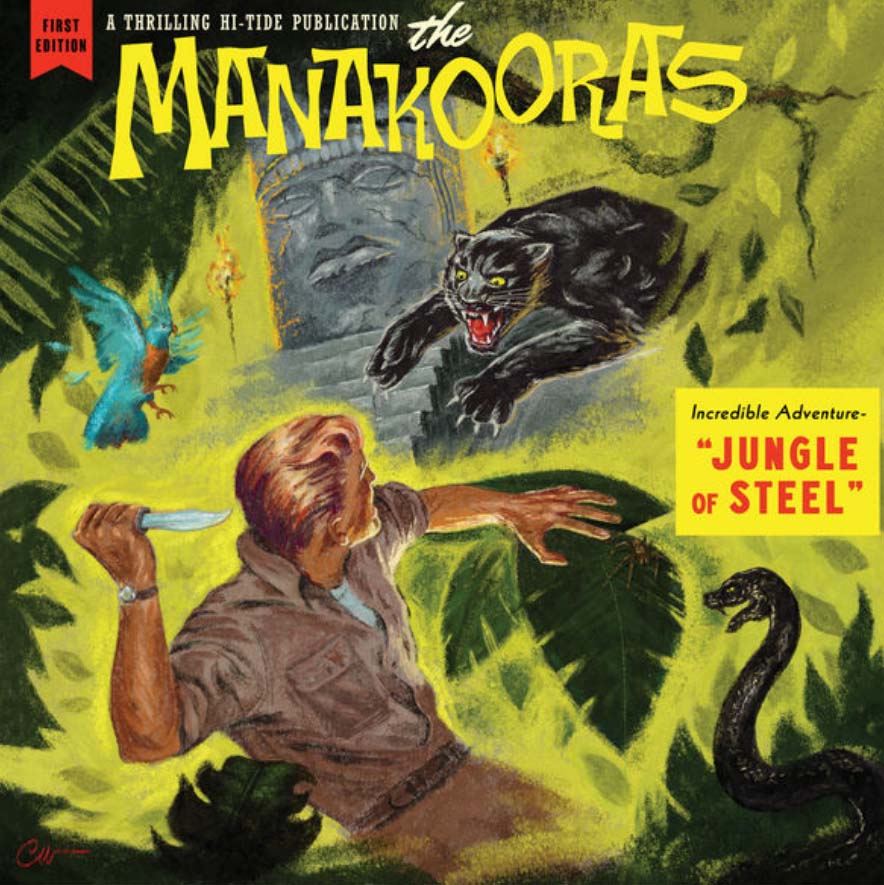 Hi-Tide Recordings – June 10, 2022 – 16/44.1 sampling on Qobuz. Electronic music including the sounds of the jungle. This is a very interesting album. What I listened for was clarity, and the Ultras delivered. 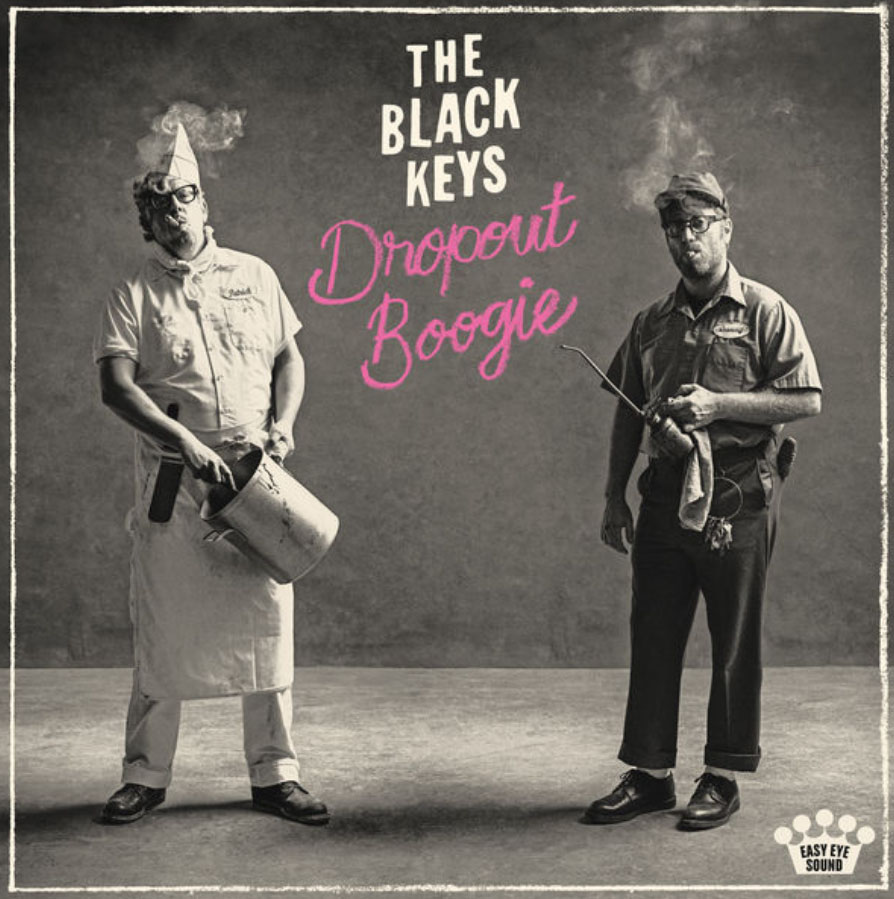 Nonesuch – May 13, 2022 – 24/48 sampling on Qobuz. The Black Keys are an American blues/rock duo formed in Akron, Ohio, in 2001. The group consists of Dan Auerbach (guitar, vocals) and Patrick Carney (drums). It sounds a lot bigger than it actually is, and the sound was big on the Ultras. “Wild Child” is one of their most famous tunes, and it is on this album. 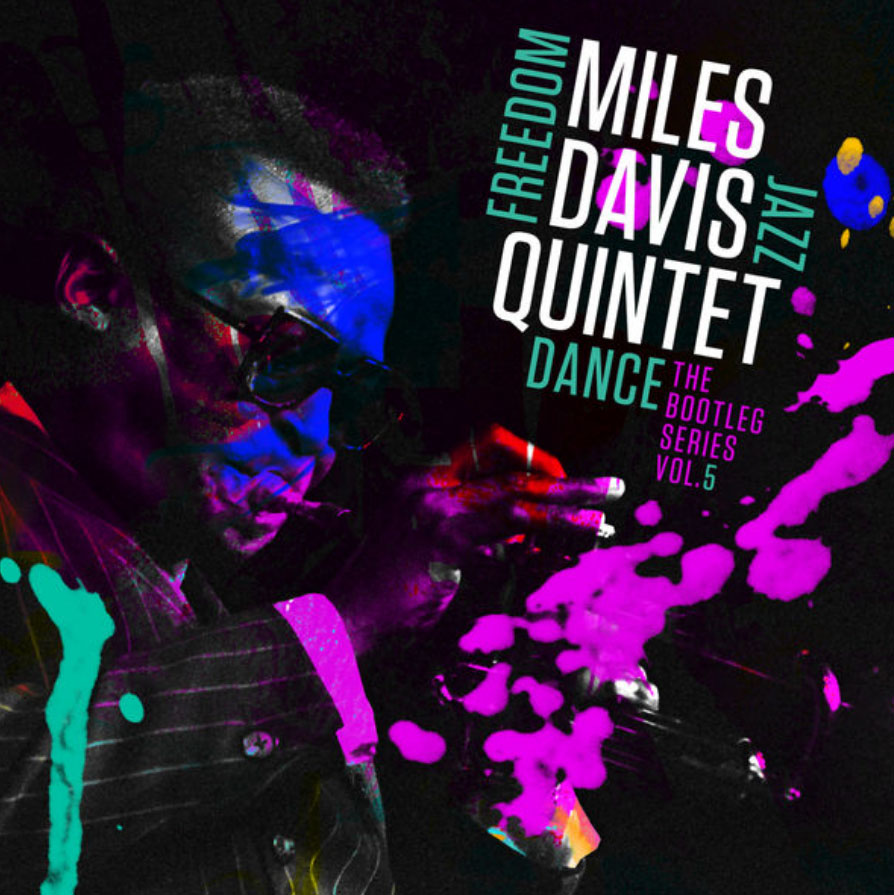 Columbia Legacy – October 21, 2016 – 16/44.1 sampling on Qobuz. Jazz like this just does not happen now. That is why it is called Classic Jazz. Miles on the trumpet, of course, sax, piano, bass, and drums. I thoroughly enjoyed it listening with the SVS Ultras. I crossed over to a subwoofer at 70 Hz. That is just something you have to do when listening with bookshelf speakers. The Ultras do produce good bass, but I like it deep and loud, so I use a sub (in this case, the SVS PB16-Ultra). 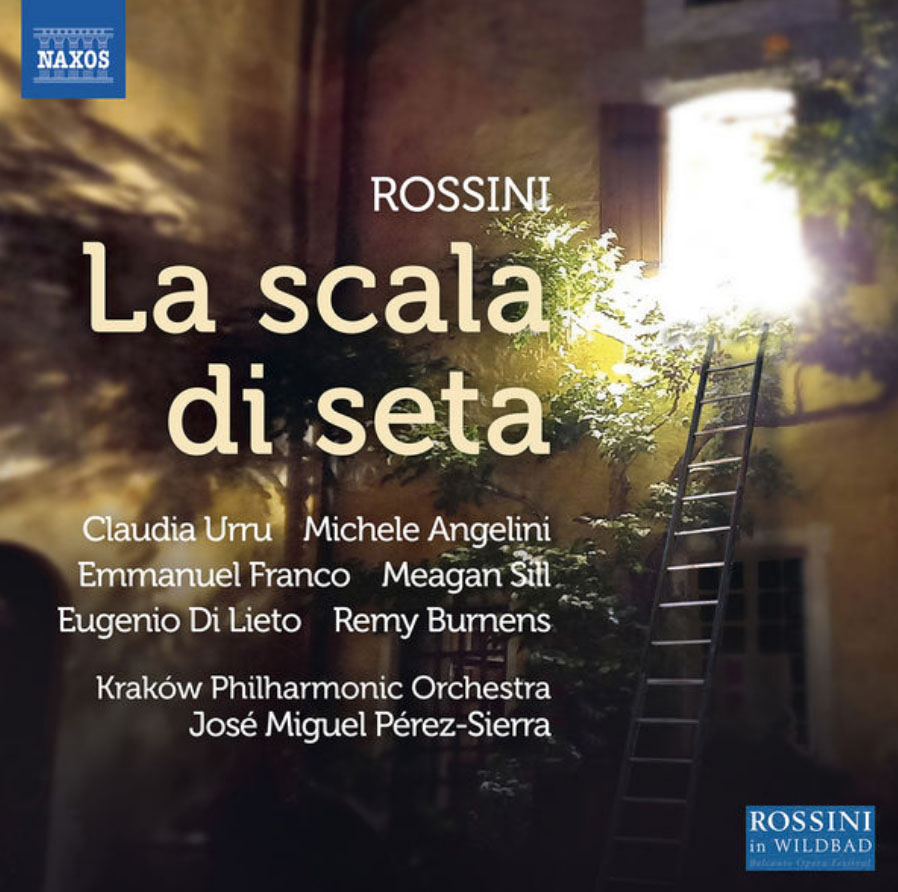 Krakow Philharmonic Orchestra – Naxos – June 10, 2022 – 24/48 sampling on Qobuz. Gioachino Rossini was only 20 when he was commissioned to compose La scala di seta. It is classified as a “farsa comica” opera, and they were very popular in Vienna in the early 19th century. The music sounds similar to Mozart who died the year before Rossini was born. The Ultras sound a little brighter than speakers with silk dome tweeters, due to the aluminum tweeter. This is common with metal tweeters and is part of the preferences in the design stage. They produce slightly sharper edges, which, for example, make guitar or lute plucks have more clarity.

At 10 kHz, distortion was 0.18%. The 2nd is larger than the 3rd. It is best to have the even-ordered harmonics the largest, and it just varies depending on the frequency of the signal.

For the woofer, at 50 Hz, distortion was 2% at 74 dB. This frequency is at the lower end of the speaker’s capability, so I did not try to increase the volume above what it was at 10 kHz.

70 Hz is a different story. At 90 dB output, distortion was 0.11% with harmonics difficult to distinguish from the noise floor.

Two Frequency Response sweeps at 76 dB SPL and 87 dB SPL were not much different than one another. This is good.

The Frequency Response derived from an Impulse Response is shown below. The volume level was set to approximately 87 dB SPL. The IR-derived response greatly reduces the effects of the room. The response is reasonably flat (no slope from one end to the other). The peak above 20 kHz is the metal tweeter cone resonating. It is out of the range of human hearing and is common in metal tweeters.

The Cumulative Spectral Display (CSD) illustrates a small amount of enclosure resonance and some driver resonance above 5 kHz. 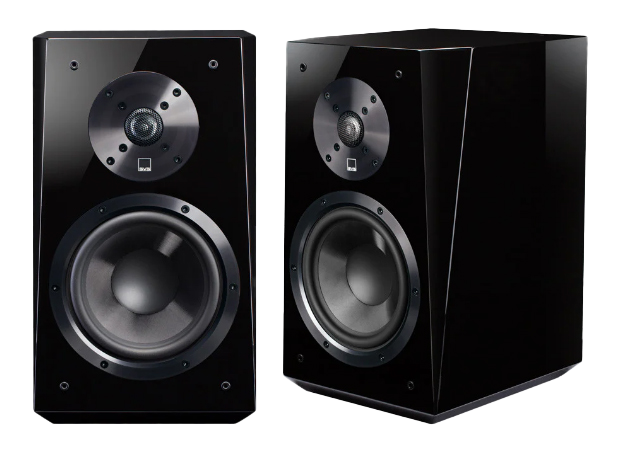 The sound and build quality of the SVS ULTRA BOOKSHELF SPEAKERS make them an excellent value at $1,200/pair. They can be used as front main left/right speakers, side or rear surround, or wide (Dolby Atmos®). They could also be used as height speakers, but they are a bit heavy for ceiling mount. I would recommend a subwoofer to be used with them if you like to crank up the volume.

Connect with us
Facebook
VIDEO
A valid URL was not provided.
Blogs & Little Things