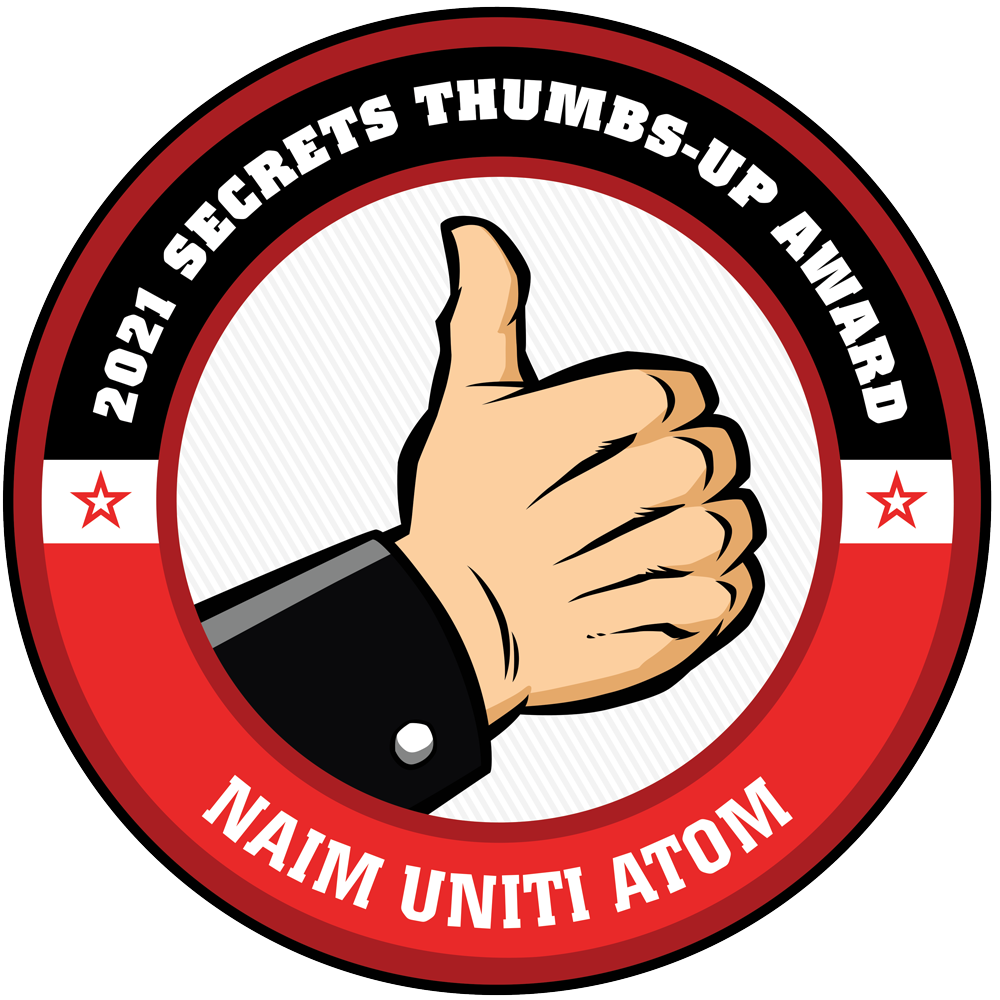 Devices like the Naim Uniti Atom point to the future of modern audio equipment with a breathtaking design in a compact, powerful component with a first-class amplifier, DAC, preamp, streamer, and a variety of inputs for any sources you need to complete your system.

I had some skepticism regarding the Naim Uniti Atom, thinking it was just another receiver with some streaming features. After living with the Atom for some days, I realized I had to adjust my thinking. The Atom is a high-end box that takes a fresh look at how an audio component should be designed. From its build quality, which is magnificent, to its ergonomics, and of course its sound and flexibility, the Naim Uniti Atom is like an entire course in how to re-think and redesign an audio component. 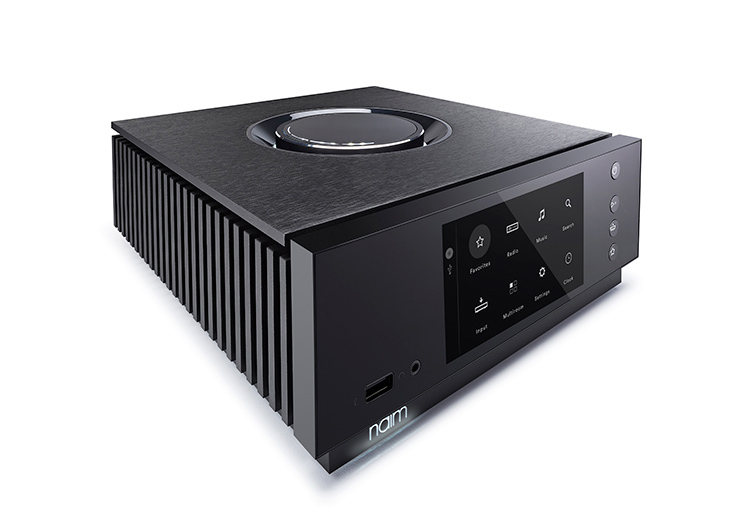 Naim, a well-regarded English company, has been around since 1969, founded by a race car builder who had a keen interest in audio. By 1973, the company was selling well-reviewed amplifiers, preamplifiers, integrated amps, and a highly regarded CD player. Over the years, Naim had won many plaudits and awards, and they continue to be innovative while remaining true to the sound of music, produced with realism driven by excellence in engineering and electronics.

Apple® AirPlay® for Apple portable devices and computers with iTunes®

Instantly access up to 20,000 tracks from any USB-connected drive

The app is a free download from the Apple App® store and Google Play™.
Control playback, volume, and EQ
Connect to compatible Naim wireless speakers and components
Remotely access music stored on your PC or NAS drive
Access streaming music services such as Spotify Connect, TIDAL, Qobuz, and internet radio stations
Group link up to four NAIM systems to play the same song simultaneously, or control each individually
Discover new music with Rovi search (iOS only)
The Naim Uniti Atom can function as a Roon endpoint.

The Naim Uniti Atom is a compact design, but heavier than one would expect from its size. The weight comes from the hefty amplifier, transformer, and heat syncs which are nicely integrated into the sides of the unit.

The front of the Atom is dominated by a 5” LCD color screen, that provides a view of the available inputs and other settings. To the right are illuminated buttons for power, input selection, favorites, and a play/pause button. The other controls are accessed with the included backlit remote or the iOS or Android app. 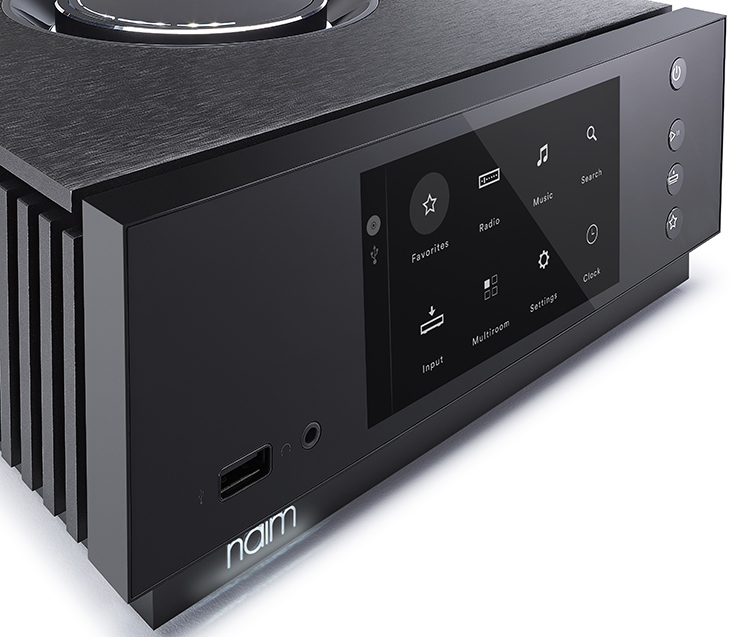 Some components are meant to be heard and not seen, but the Atom is bound to draw people to its distinctive design and lovely display of album art if the unit is up and running.

Although the Naim Uniti Atom has Wi-Fi connectivity, there are no visible antennas which is another subtle design touch. They are cleverly integrated into the metalwork of the heatsinks. It’s such a thoughtful touch, for a product full of thoughtful touches. 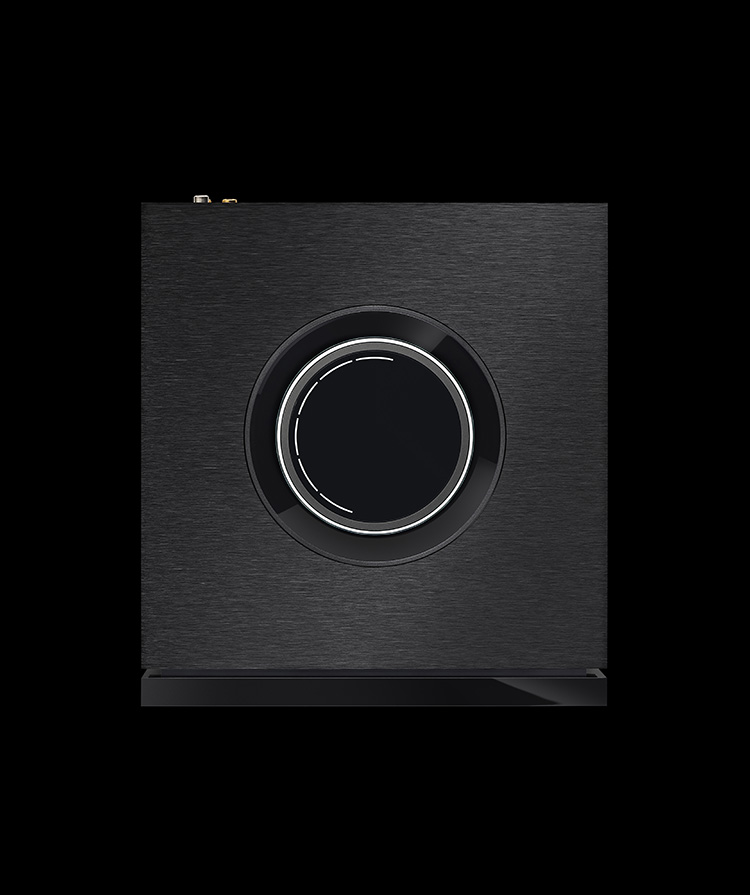 At the top of the Naim Uniti Atom is a striking, large volume control. Just touching and rotating it is a thrill. You’ll agree when you try it. As the volume increases some subtle white LEDs light up to indicate the state of the volume control, and you get a numerical readout of the volume on the front panel.

Interestingly, the Atom remote uses the Zigbee protocol rather than infrared, so it’s a 2-way connection. If you turn the volume control on the Atom, the remote lights up to display where the volume is set. Another nice touch. You can also use the remote in another room. With no infrared, you don’t have to aim the remote or be close to the Atom.

If you are interested in high-quality streaming, then a pair of high-quality speakers and an internet connection are all you need to have a very functional, high-end system. The Atom is fully able to decode high-resolution files from any source, like a local hard drive, a network drive, or one of the streaming services that offer high-resolution playback. MQA is not supported on the Atom. More about that later.

If you want to play CDs, you can use the optical or analog connections. Even a reel-to-reel could be accommodated if you are so inclined.

The Naim Uniti Atom had about the best setup experience I’ve had from a high-end component. I got the main unit out of the box, found the remote, batteries for the remote, and put them in. Then I downloaded the iOS app for my iPhone. Plugged the power cord in and went through a quick and easy pairing process of the remote to the Naim.

The only bad experience involves hooking up speakers. Naim insists on you using their special speaker connectors. There’s no option to do a bare wire connection. 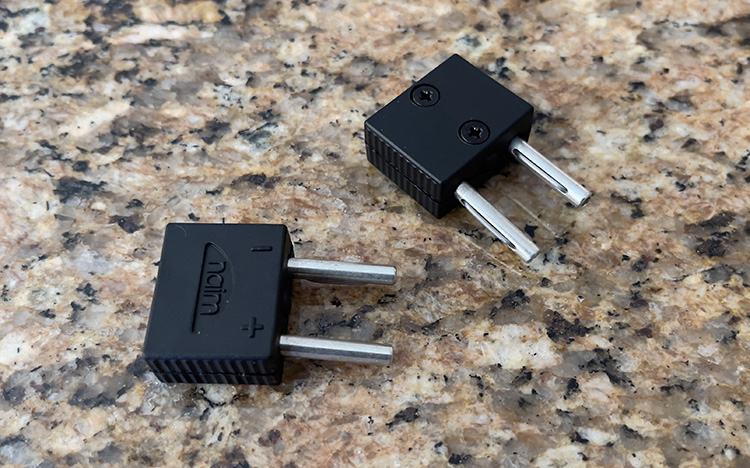 There’s even a warning about not using anything except the supplied oddball speaker connectors. To hook them up requires some soldering. That seems downright silly. However, my speakers have banana plugs and they connected fine at the back of the Atom. I think buyers would be better served if Naim included banana plugs rather than the offbeat speaker connectors provided.

I talked with Naim about the speaker connectors and they believe a soldered connector is a better connection. There is a warning on the back panel essentially saying don’t use banana plugs, but Naim now says good quality banana plugs are fine, and the manual will be changed to reflect that.

There is no subwoofer output on the Atom, but that doesn’t prevent you from using a variety of methods to get a subwoofer up and running.

I also asked Naim about this. They say the pre-amp outputs can be used for a subwoofer, and while true, the output is not labeled such on the back panel and there is no mention of how to hook up a sub in the included documentation. Naim says they will update the documentation as well. All in all, Naim is to be praised for seeing these issues when pointed out and taking proactive steps to correct them. Many companies would just ignore the criticisms.

Once your speakers are ready to go, plug in a network cable or put the unit on your local Wi-Fi network. If you are streaming high-resolution files, a direct network connection is your best bet.

Using the app, you can set up Tidal or whatever streaming service you have. The app allows more control than the included remote, so I found it was best to keep my iPhone handy.

The big plus for me was that the Atom is a Roon endpoint. You can see the Atom appear in the Roon interface. 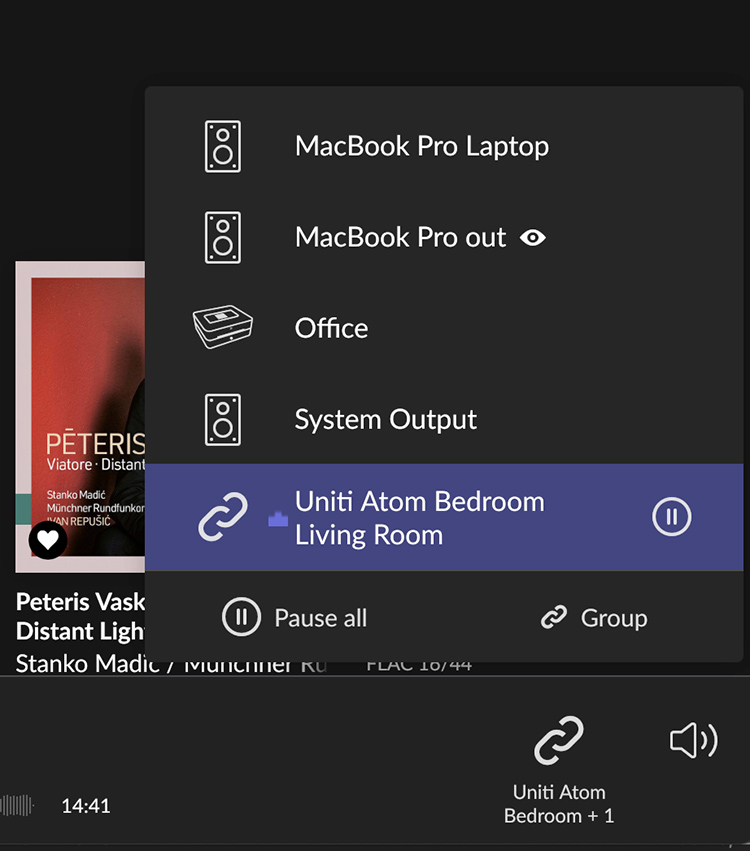 All my music, a combination of ripped CDs and high-resolution files, is tied in with my multi-room Roon system. Using the Roon app, it immediately identified the Atom on my network. When I added the Atom to my playback devices, the music started playing out of the Atom in sync with other Roon endpoints around the house. Even better, album art appeared on the Atom screen in color. A nice surprise was that when I walked up to the Atom, I got more details on the music that was playing. When I walked away, the album art returned. The same music information is available on the Naim iOS and Android app, along with the album art. Very slick and well thought out. The Atom seems a first-class and innovative endpoint for those having a Roon-based system.

I set up the Atom in my fairly large master bedroom, where I have KEF LS50 speakers. They aren’t the most efficient, but I thought the Atom would drive them well, and they did.

The Naim Uniti Atom is a neutral-sounding audio device. It played high-resolution files with aplomb, and CDs ripped to FLAC sounded detailed and the image between speakers was solid and dimensional.

It’s clear that the Atom is not a slapped-together integrated amp. Given speakers that match the specs of its amplifier, you’re going to get an excellent high-end musical presentation. While the amp is rated at 40 watts, it sounds more powerful and it didn’t give up in the low notes. I was also pleased with the quality of the streamed stations, and of course Tidal sounded excellent when streaming high-quality music.

The Naim Uniti Atom does not support MQA, which seems all the ‘thing’ these days. I asked Naim about this, and their response was that the “decision made by Naim engineers who felt they could not implement it and maintain the sound quality they desired.”

I agree. While MQA has gotten some traction, I’ve never really heard it to exceed a good CD rip or high-resolution file.

There is a partial workaround if Roon is used. As I said, Naim streaming devices are Roon endpoints. Playing MQA files will have Roon do the first unpacking, then send it to the Naim for playback. Not full MQA decoding, but it will play the MQA files.

Here’s some of what I listened to: 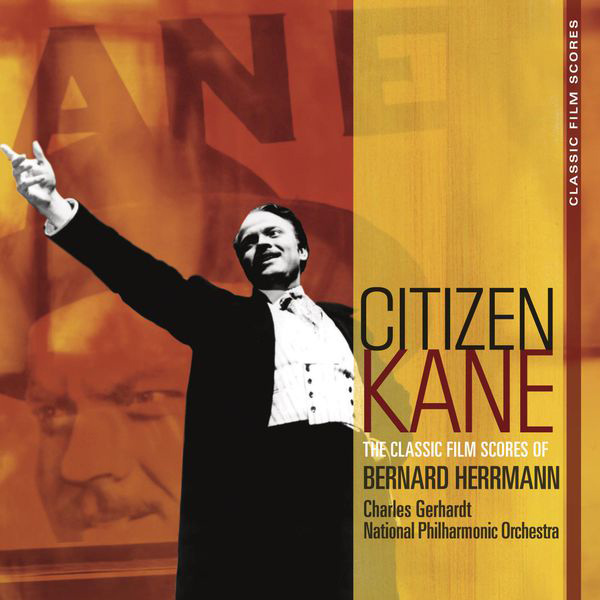 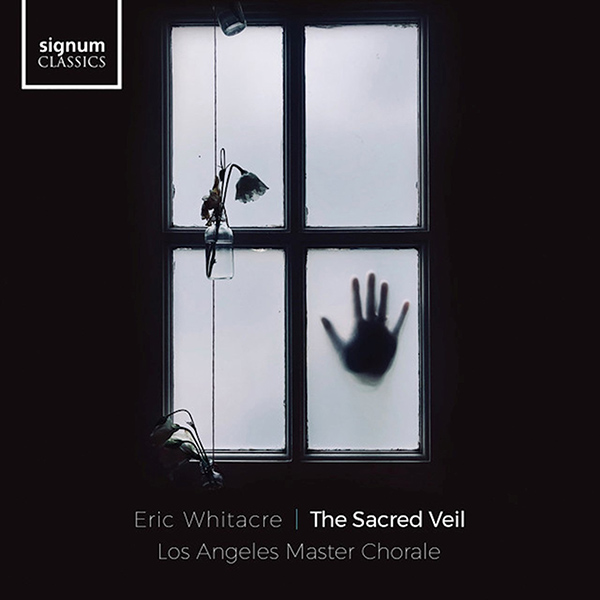 The Sacred Veil, Los Angeles Master Chorale
I played this one via Tidal and it was terrific. There’s nothing like the sound of massed voices to test your speakers and electronics. Once again, the Naim Uniti Atom sounded simply great. 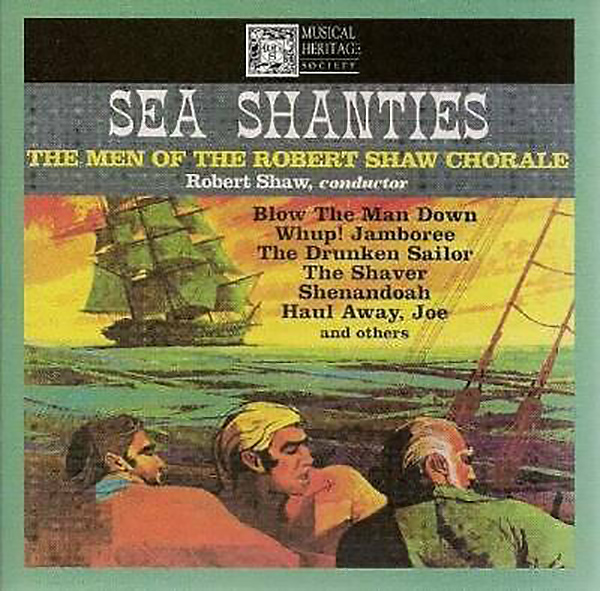 Sea Shanties, Robert Shaw Chorale
Perhaps a strange choice. This is a 1961 RCA recording. Back in the day when I worked in audio sales, this was my go-to demo disc. (It was vinyl then). The best track was ‘What do we do with the Drunken Sailor’ and it never failed to amaze my customers. It amazes still, 60 years later. 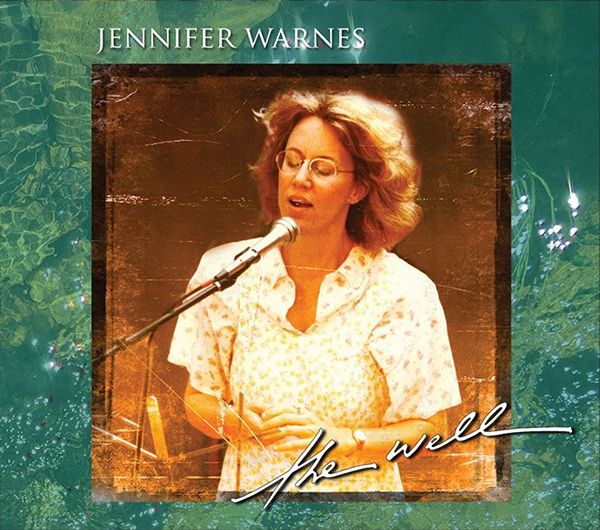 Famous Blue Raincoat, Jennifer Warnes
Another artist I often return to. The recording gets the sound of a female voice just right, and the Naim Uniti Atom does it too. A great test of the speaker and electronic synergy. 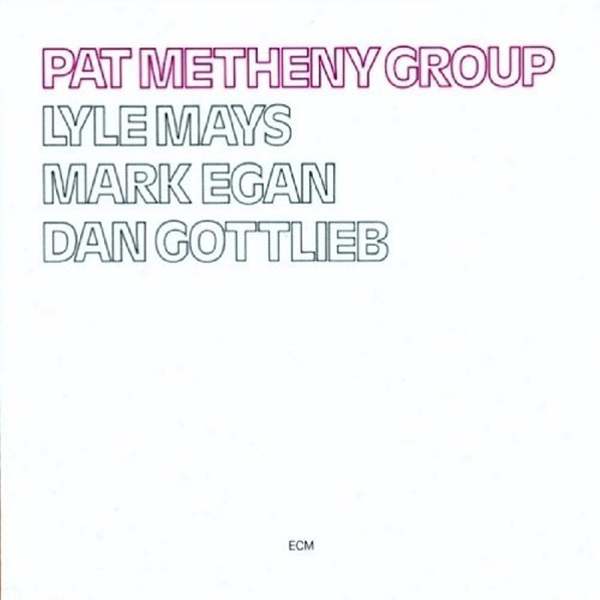 The Pat Metheny Group
Metheny is an innovative guitarist joined by keyboardist Lyle Mays, bassist Mark Egan, and drummer Dan Gottlieb. This is a well-engineered ECM recording. It sparkles when played through the Naim Uniti Atom. 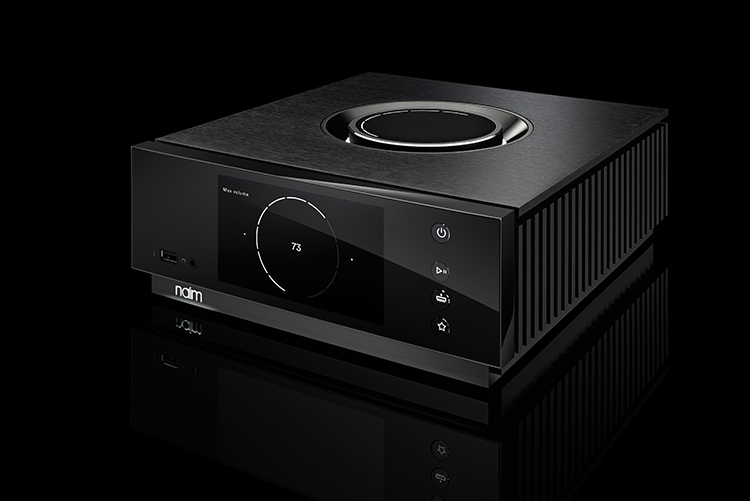 Make no mistake, the Naim Uniti Atom is a $3800 component. At the same time, I’d be hard-pressed to find a pre-amp, amp, DAC, streaming system that sounds as good for less. If your tastes are high-end in equipment and music quality, adding a pair of speakers gets you a wonderful system for a study or a bedroom or a smaller living space.

I’ll admit when I started that the Naim Uniti Atom seemed like a high-priced integrated amp with a nice, modern design. But after a couple of hours, it began to grow on me. The multiplicity of inputs, the elegant controls, the album art displayed on its front screen, and the dynamic and clean sound. Over time I began to appreciate the little things, like the well-designed app. So many Hi-fi companies have crappy apps that seem like afterthoughts. The iOS app is exceptionally thought out, and I expect the Android app is the same. All apps to control components should be this good.

So, the Naim Uniti Atom has first-class build quality, reliable software (I saw no freezes or glitches during my testing), and it sounds as good as anything I’ve tested. It doesn’t have the most powerful amplifiers on offer, but with the right speakers and room size, it sounds simply great