Up NextMonoprice Monolith M1070C Headphones Review
If your loudspeakers live their lives on some sort of hard flooring surface, then these IsoAcoustics Gaia II isolators may be a worthwhile tweak to help get your speakers to put their best foot forward.

I tend to exhibit a healthy dose of skepticism when the topic of discussion turns to that broad category of colorful items known as “audio tweaks.” Especially over the years that I’ve made the transition from pure hobbyist to audio reviewer, I’ve been witness to a wide variety of tweaks that ranged from the genuinely clever to the utterly bizarre. Now I’m not saying that everything that falls under this product umbrella is demonstrable “Snake-oil” lying in wait for its next unsuspecting victim. Far from it. But we’ve all come across various aftermarket audio add-ons, cables, fluids, suspension gizmos, and magneto-flux-capacitating thingamajigs purporting to help make our music sound better. Green CD markers anyone? It’s honestly kind of nuts.

IsoAcoustics is a small Canadian company that specializes in audio isolation products for both the consumer and professional markets. Company founder, Dave Morrison, had worked for the CBC (Canadian Broadcasting Cooperation) in the 1980s and was directly involved in both the planning and updating of several of the CBC’s technical and production facilities in Toronto along with design work for the construction of the company’s then-new broadcast center in the heart of the city. Much care was taken regarding isolation and acoustics when designing and building the various studios and spaces in the new broadcast center along with the building’s general structure (it apparently sits on 3,000 isolation pads installed on bedrock four stories below grade). This acquired knowledge would hold Dave in good stead when he decided to strike out on his own and start IsoAcoustics. The company’s first product, the ISO-L8R professional monitor stands were designed with extensive testing done at the Canadian NRC (National Research Council). I’ve owned a pair of the ISO-L8R stands for years and use them with a pair of ELAC Uni-Fi Slim bookshelf speakers on my computer workstation desk. I originally got them because they seemed like a practical and intelligent solution for my needs. I quickly found out that they also helped the little ELACs sound noticeably better than they had been, sitting on the makeshift stands that I had made from some old books. 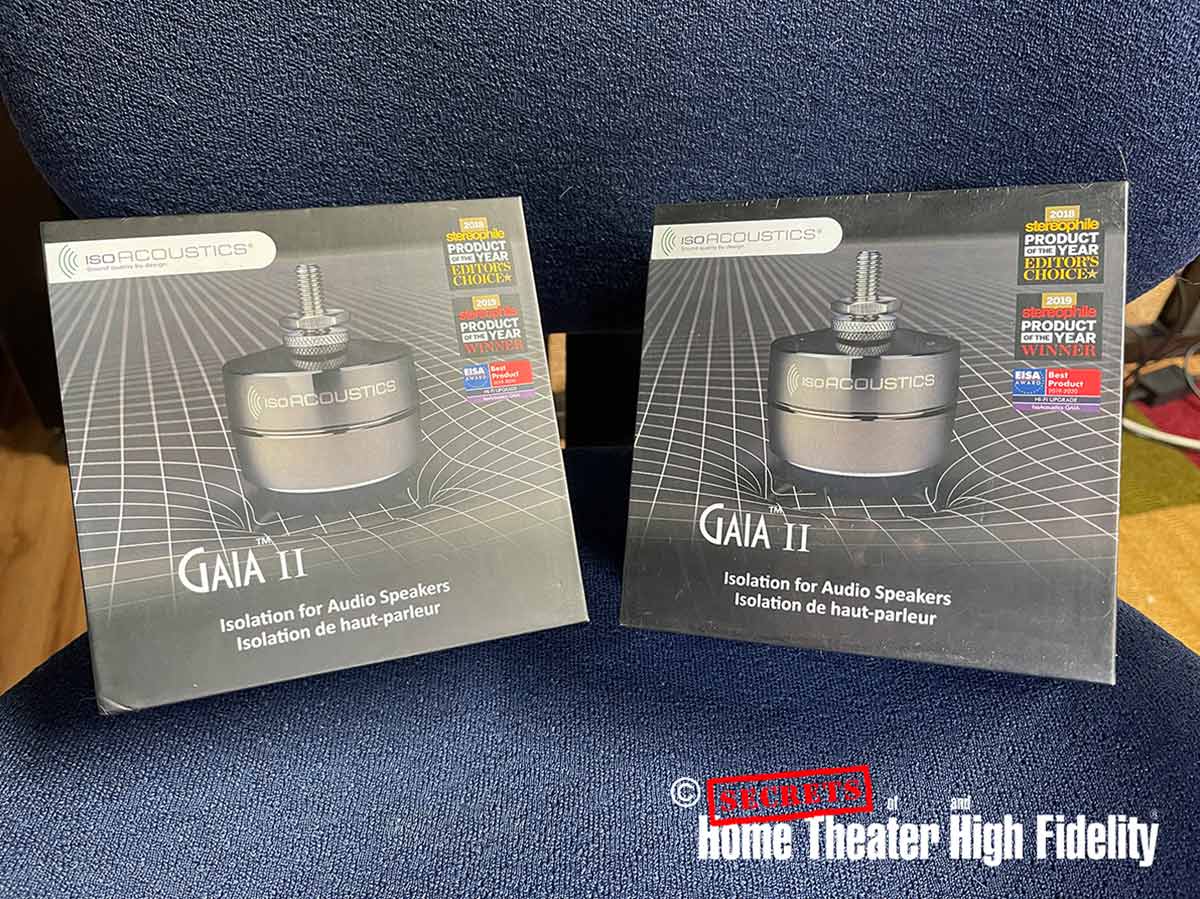 So, it was with this knowledge and experience that I became interested in checking out the Gaia line of isolator feet when I was made aware of them. I was intrigued to see if I could notice the same sort of difference that the ISO-L8R stands made with my desktop speakers on a pair of floor-standers. It sure seems that some speaker manufacturers like PSB and Marten think they do as IsoAcoustics isolators are now included as standard equipment with their current flagship loudspeakers. After a few emails with the product rep, it was determined that the Gaia II would be the right size and fit for the Revel F228Be loudspeakers that they would be tested on.

Designed for floor-standing speakers and subwoofers weighing up to 121 lbs. (55Kg). 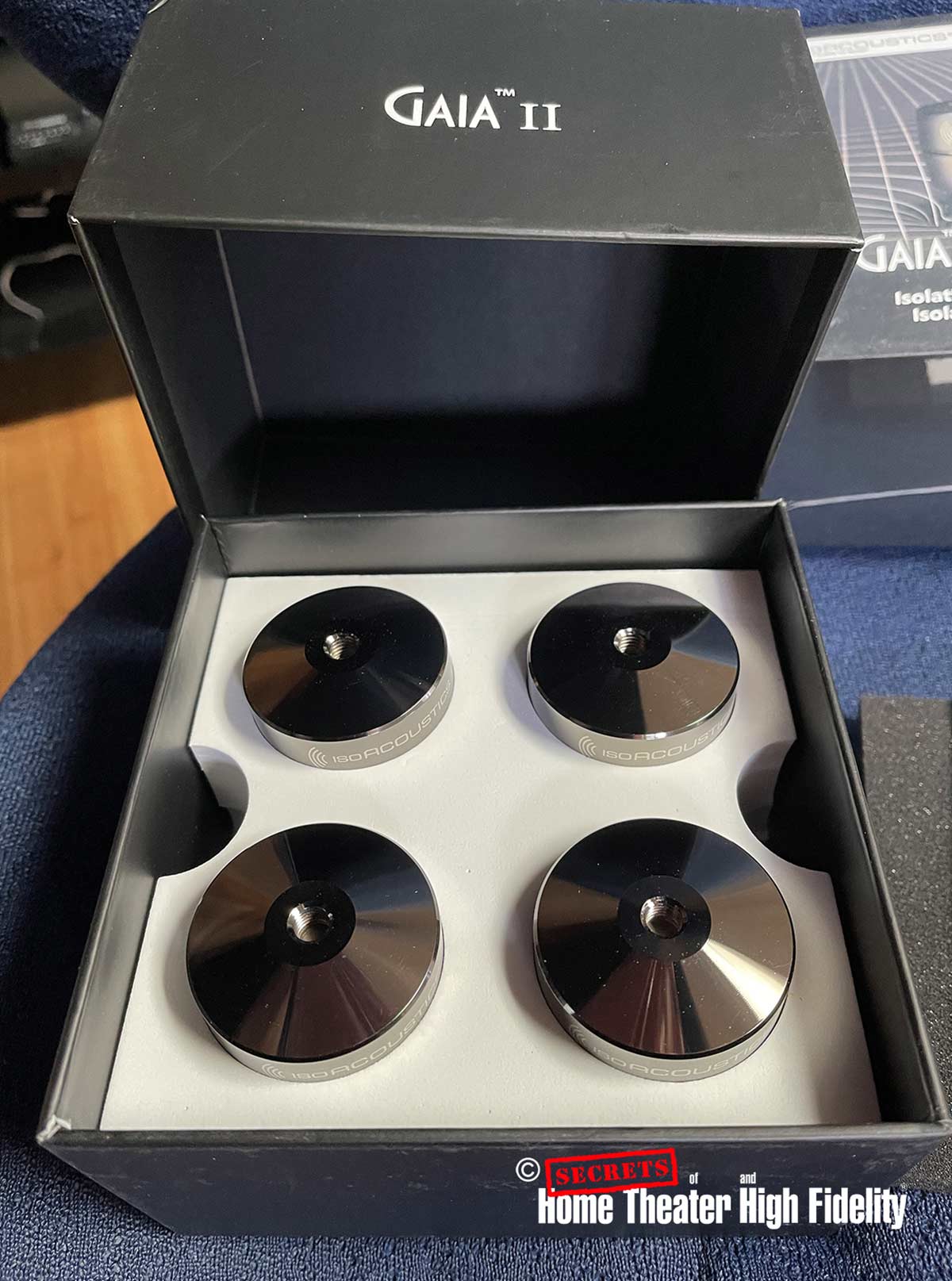 IsoAcoustics offers three different sizes of Gaia isolation feet depending on the weight of the speaker or subwoofer to be supported. The Gaia II can support a loudspeaker of up to 121 pounds per set of four feet. 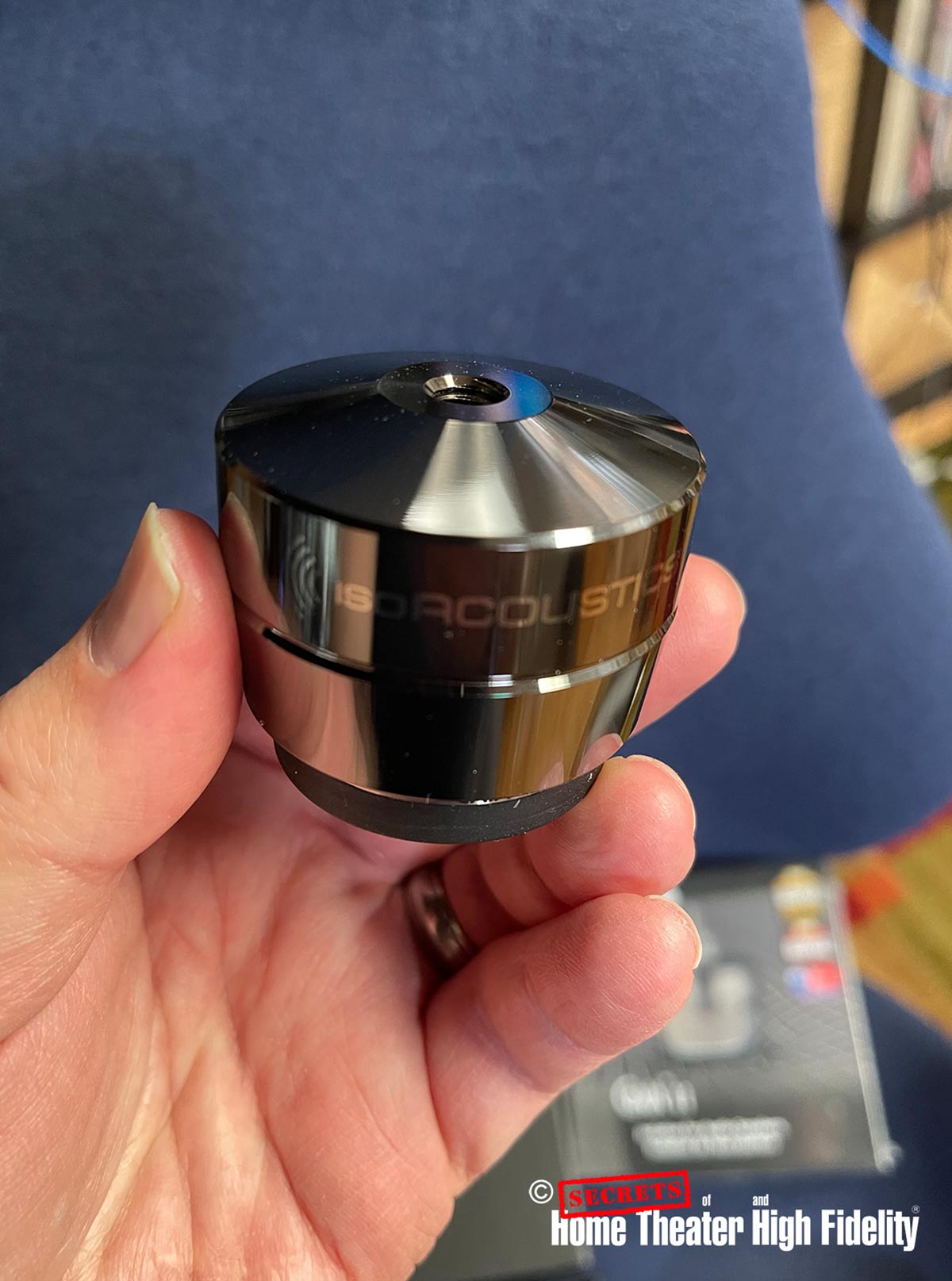 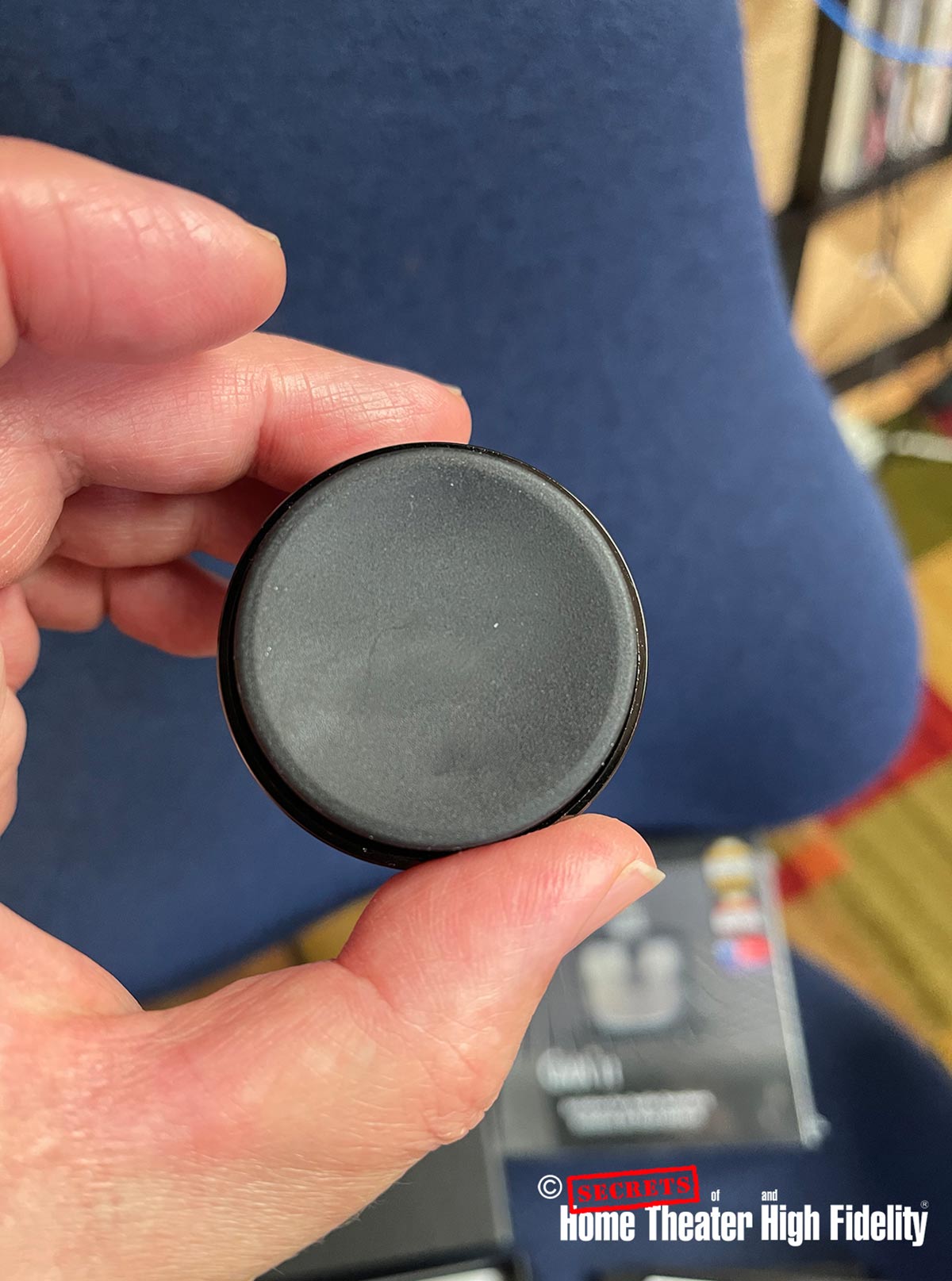 Each foot features a proprietary compound of a particular durometer (hardness) that comes in contact with the floor. The contact face is designed to act as a suction cup, firmly fixing itself and the connected loudspeaker to the floor. The top part of this material is connected to a subassembly within the Gaia II that is designed to effectively manage the speaker’s energy. The isolators are less compliant in all off-axis directions, suppressing any cabinet oscillations altogether. IsoAcoustics claims that focusing the speaker’s energies in this manner while isolating others improves the clarity, focus, and openness of the resulting sound. 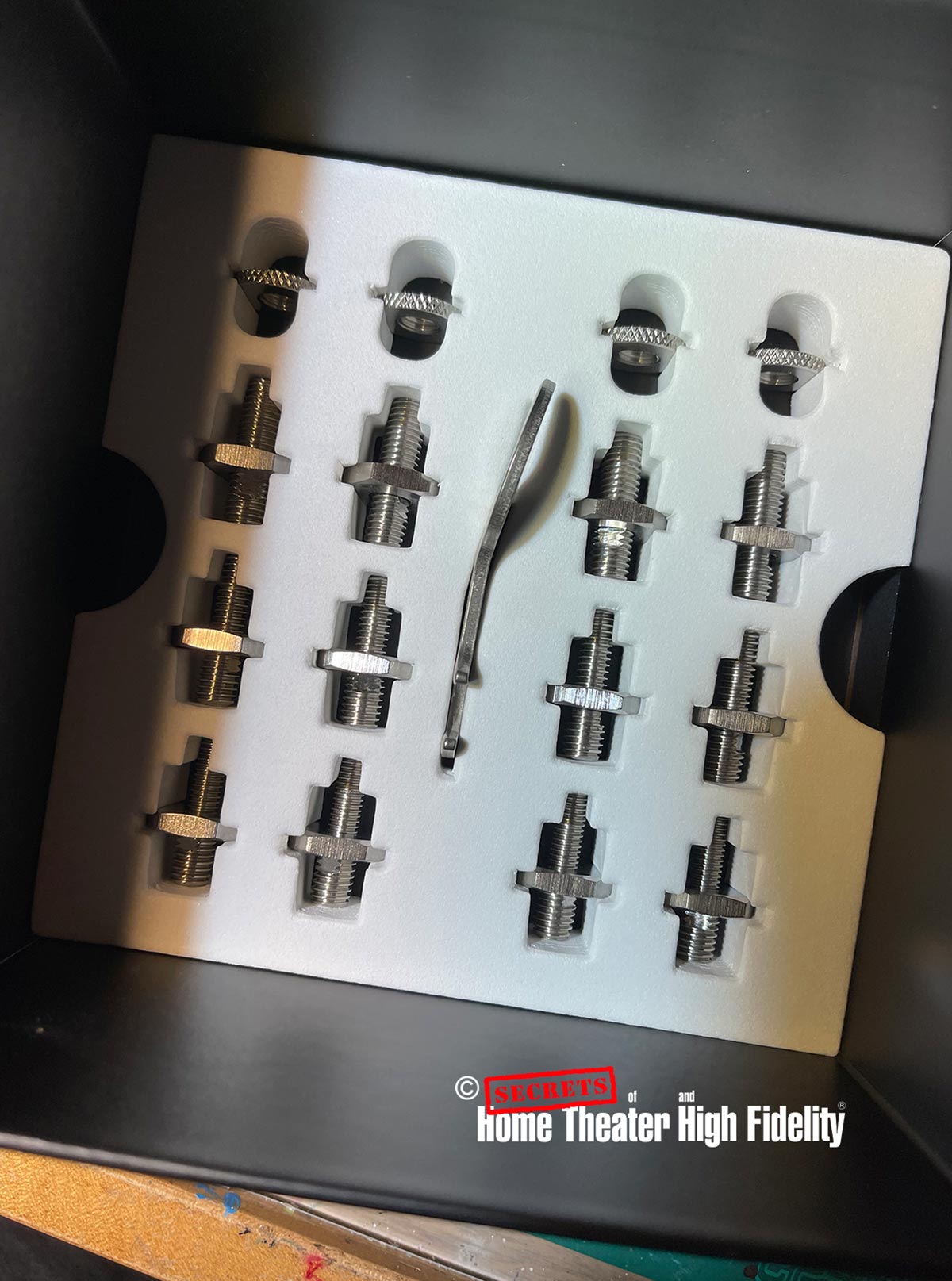 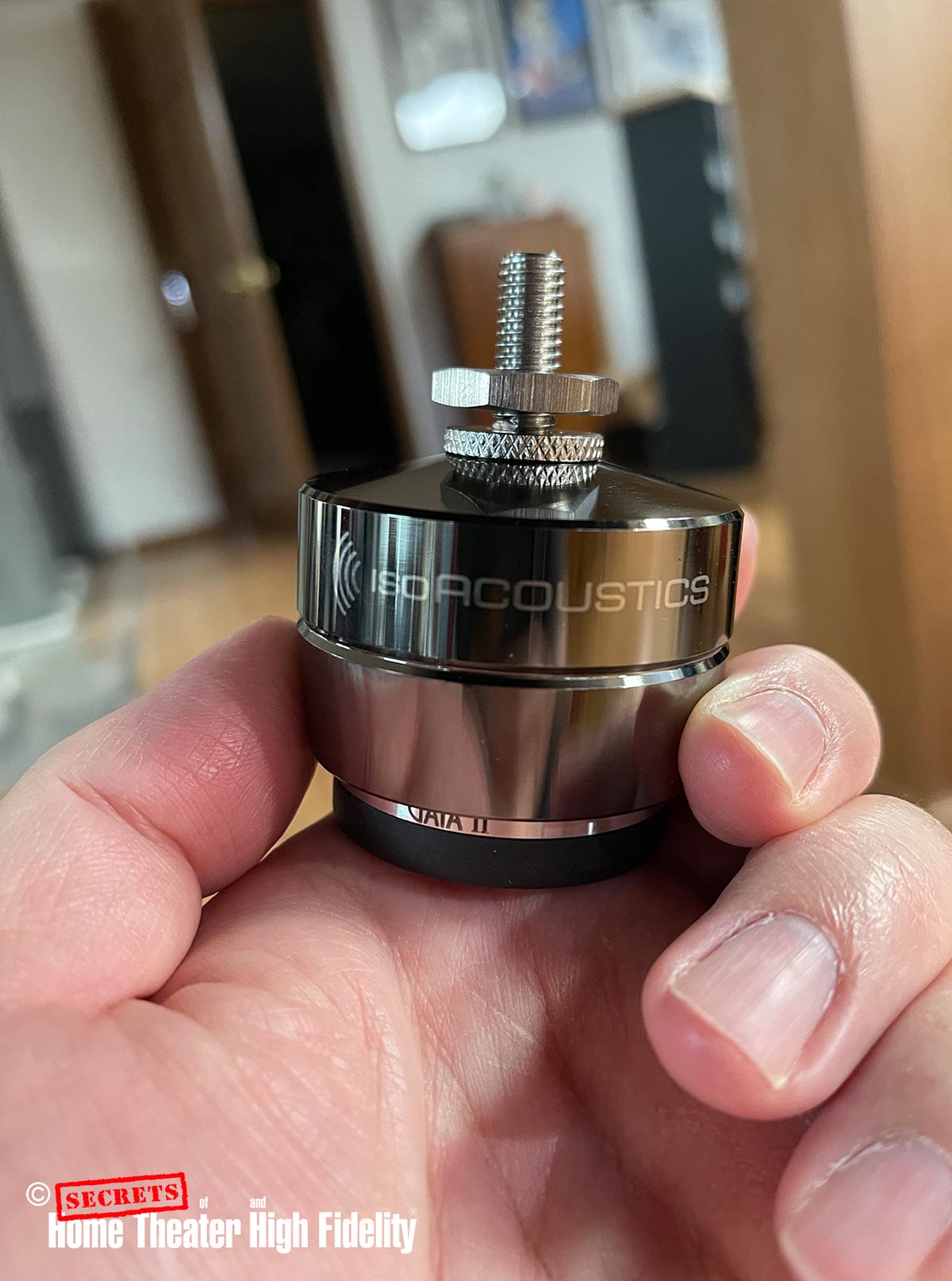 Each set of four feet comes with an installation wrench and 4 sets of different-sized threaded inserts. 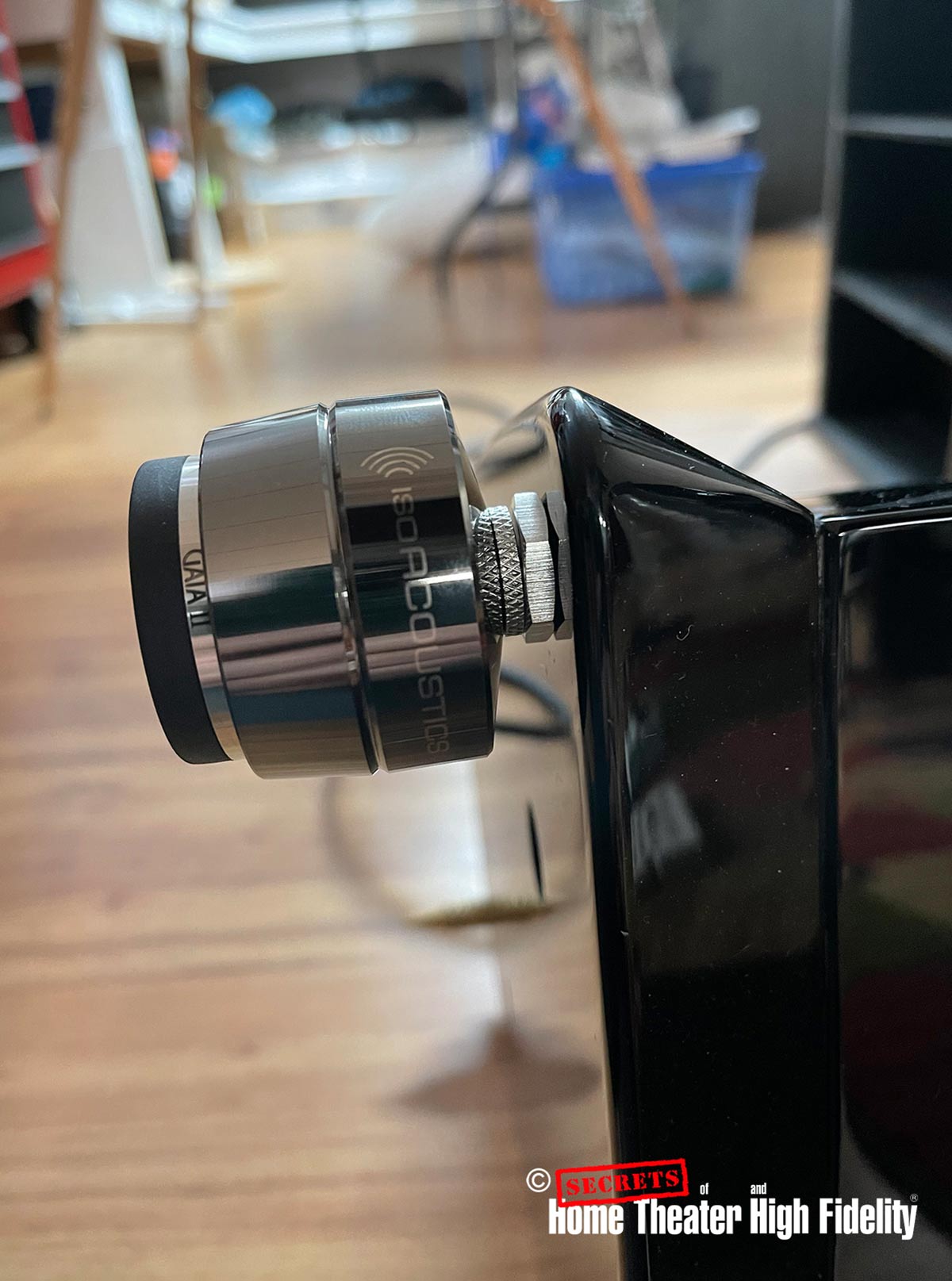 I am very familiar with the sound of the Revel F228Be loudspeakers and I had them set up and playing as per normal for a solid 2 weeks before installing the Gaia II feet. After installing and positioning the Revel speakers as per normal, I began to listen to some of the same music I’d recently been consuming and paid close attention to hear if anything had changed. The differences weren’t revelatory but I felt they were there. Most noticeably a bit more impact in the bass with things like kick and bass drum and acoustic bass. There were no dramatic shifts in the tone or the character of the speakers, which I was grateful for, just the sense that bass-centered instruments were hitting tighter and a little harder.

To see if this perceived change of sound was something that I could measure, I took an overall in-room average measurement of the Revel F228Be on the standard spikes and disks that I had been regularly using, then I took another with the Revels using the IsoAcoustics Gaia II. I took great care to be sure that I positioned the speakers and the microphone identically (as possible) for each measurement run. When comparing the two plots above you can see that there is a slight increase in the energy of the bass frequencies using the Gaia II feet, from 200 Hz down to 65 Hz, and a slightly higher peak at 30 Hz. Not by a lot but by a detectable amount. Still, I wanted to see if there was a way that I might be able to set up an A-B test to see if I could be more certain that what I was hearing was true.

I decided to set up the two Revels in a mono listening scenario using my Benchmark HPA4 preamplifier and AHB2 power amplifier. I started with both speakers back on their original spiked feet and disks, set up beside each other, placed well into the middle of the room. One speaker was wired to Input 1 while the other was wired to Input 2. The idea was to play an assortment of repeating mono music test tracks while instantly switching between the two speakers via remote. The tracks were specially chosen because the audio spectrograms of the looped segments come close to resembling pink noise. Please refer to this article on Dr. Sean Olive’s blog for more background on this. This should allow me an instant comparison that I could validate. I first made sure to level match the speaker’s output and then play the tracks on the speakers while they both had the same original spikes on them. I then switched back and forth between the two via remote to make sure that the speakers sounded identical in tone on the original spikes. Just to be sure the room wasn’t overly affecting the sound of one over the other. I confirmed they sounded the same. 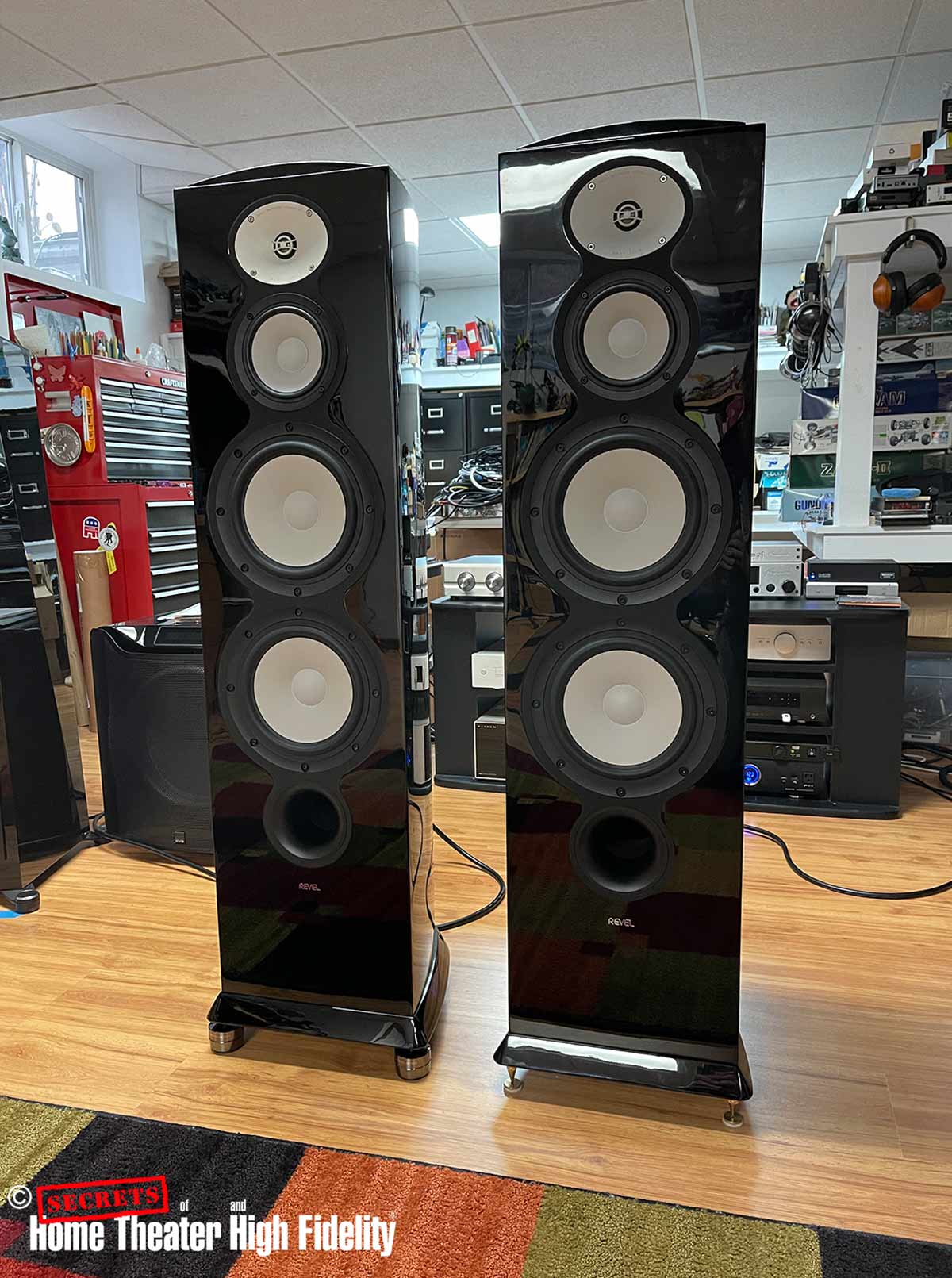 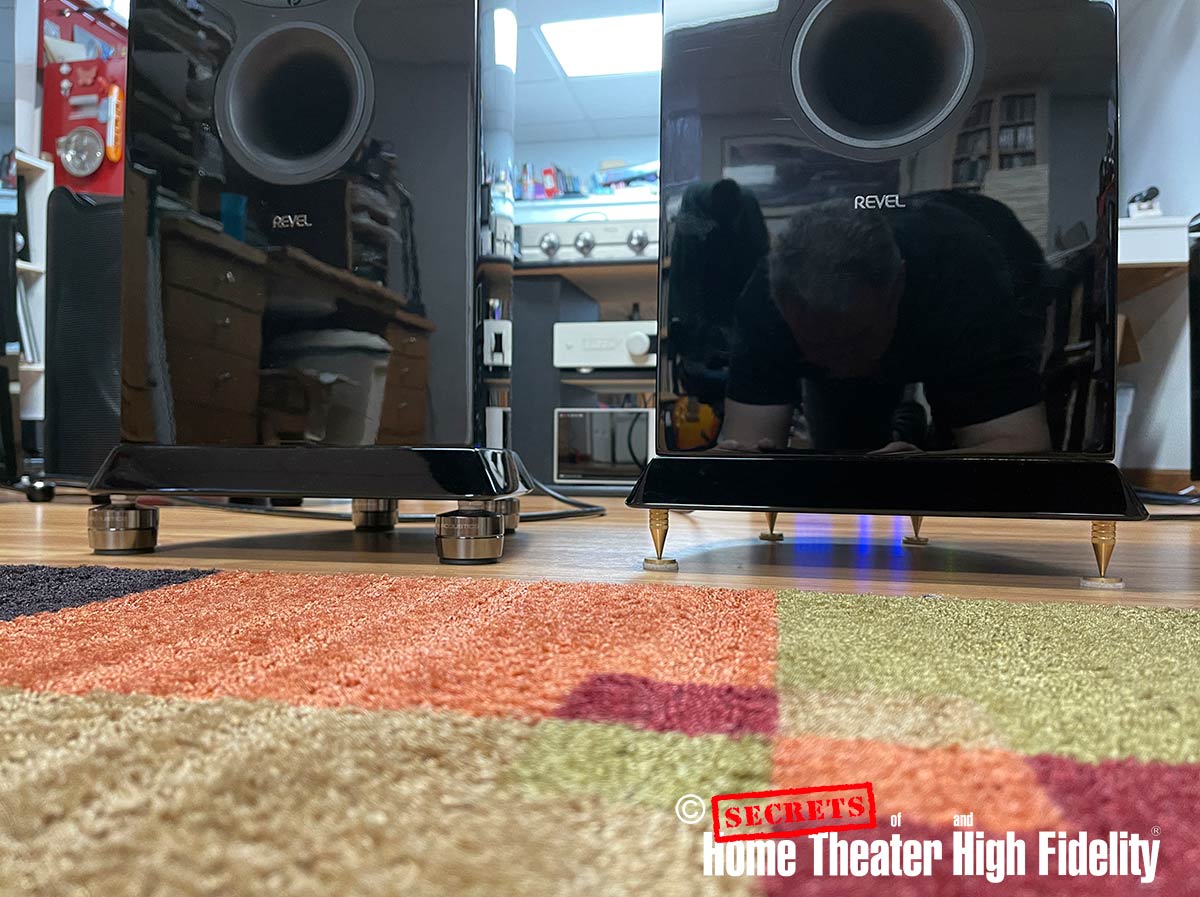 Now, I switched the spikes and disks on the left speaker with the Gaia II feet. I placed the left Revel back in position and reran the mono music clips, switching back and forth to hear if anything changed. The test tracks I used were a combination of jazz, pop, rock, and orchestral and, sure enough, the left speaker with the Gaia II feet consistently on each of the tracks had a tighter and more impactful sense of bass whenever there was acoustic or electric bass, kick drum, bass drum, and cello. There was both a moderately higher sense of definition and punch in the left speaker versus the right. Just to be extra certain that my mind wasn’t playing tricks on me, I swapped the speakers so that the Gaia II feet were now on the right. I can confirm that the sonic improvements I heard followed the Gaia footed speaker to its new spot. 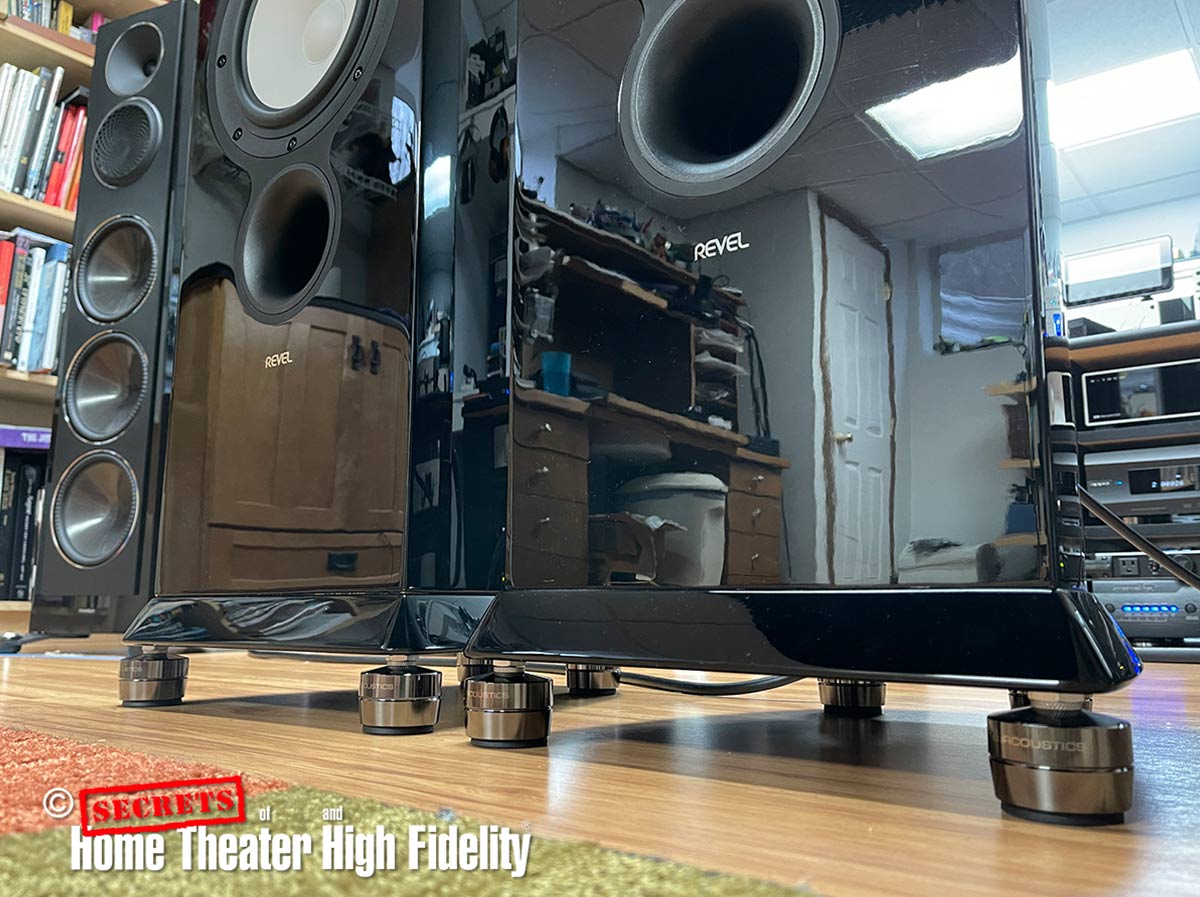 As I’ve said earlier, I’m naturally leery when it comes to equipment tweaks or mods. At the prices that some companies charge for some of these “improvements” I personally like to know that I can quantify a change for the better as well as qualify it. For my use case, in my room and with these particular speakers, I found the IsoAcoustics Gaia II isolation feet to make a noticeable and positive improvement in the sonic performance of the Revel F228Be. The improvement wasn’t earth-shattering, but it was noticeable and enjoyable enough that I’d want to use the Gaia II feet permanently on the Revels. They also were a significant step up in the aesthetics department. For the asking price, the improvement is worth it to me. As with anything like this, YMMV depending on your speakers and your setup. But you have to consider, when speaker companies like PSB, Marten, and RBH all include IsoAcoustics feet as standard on their flagship loudspeakers, it has to be for a good reason. From this experience, I think that there is a better than average chance the IsoAcoustic Gaia II isolation feet will not only add to the looks of your speakers but will beneficially improve the sound. They did for me.