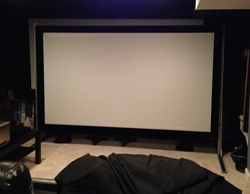 Go to your local movie theater and sit close enough to the screen and you’ll see something: holes. At the cinema everyone uses perforated screens with the speakers behind the screen to maximize both screen size and immersion. The audio comes from the screen you are watching and not from the sides or floor.

At home, acoustically transparent screens have been around for years but have always had flaws. The size of the holes required for allowing sound to pass through are often visible from normal seating distances in the home. Also, much of the light passes through the screen, and this reduces the brightness of the image you will see. These two flaws often means that these screens were only used in the most expensive home theaters, where expensive projectors with brighter images were available.

These limitations have been vanishing the past few years. A projector you can buy for $3,000 now has more than enough brightness to allow some loss through the perforations. We have also seen the introduction of woven screens that allow sound to pass through, but also have a fine texture that is invisible from a normal distance.

One such screen material is the Enlightor 4K from Seymour Screen Excellence. Boasting ISF certification for image quality and said to be acoustically transparent from 100 Hz to 20 kHz, it looks to be a screen material that can give you that movie theater immersion at home.

The Seymour Screen Excellence Enlightor 4K Projection Screen In Use

My home theater room has low, 7.5′ ceilings. Because I don’t want my center channel to block the screen I am height limited in the screens I can use. When it came time to buy a screen for my room I selected a 2.40:1 ratio screen as I have the width to use it but did not have the height to go larger. When Seymour shipped me a screen to review, they sent a 110″ 16:9 ratio, over a foot taller than my usual screen. With the Enlightor 4K I can place my speakers behind the screen and not worry about them being in the way. 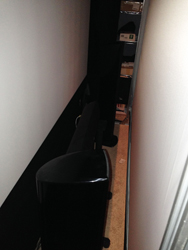 The Enlightor 4K has two different gains specified: A reference gain of 0.98 and an actual gain of 0.80. The reference gain is in comparison to gain on a Screen Innovations screen. The gain of 0.8 is relative to an ideal reflector and not relative to any other material. I measured the gain twice myself using a lux meter and a 2% white window and find it to be between 0.65 and 0.70. Even with the 110″ screen, I was able to get the proper 14-16 ftL of light with JVC X700, Sony 55ES, and Epson UB5020 projectors.

The Enlightor screens have an optional black backing material that prevents light from passing through. When I measured it myself I find that 1/3rd of the light from the projector passes through the screen, so I had lots of excess light in my room because of this. Adding the backing material resolved this issue but if you have the Enlightor against a false wall without reflective items behind it, the backing isn’t necessary.

Because of my room layout, I sit 7′ away from this 110″ screen. Even with this short distance I didn’t notice any grain or texture from the weave. It’s tight enough that every pixel from the projectors is visible but it still allows sound to pass through. You can see this tight weave in the image below. Enlightor 4K is in the lower-right, Enlightor 2 in the lower-left, and a regular DaLite JKP Affinity material on top. This acoustic transparency makes a far greater difference than I thought it might. 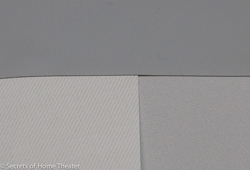 I placed my right and left speakers behind the screen and still hear a wonderful stereo image. Music sounds fantastic and isn’t muffled as I worried it may be. Not hearing a difference doesn’t mean there isn’t a difference, so I measured the audio from the center channel with the screen in place both with and without the optional black backing material, and then with the screen material removed. I didn’t move the microphone or speaker to do the tests, but instead removed the screen material between measurements.

The measurements with the screen in place are identical, with or without the backing material. When I remove the screen, the audio is +3dB, but the frequency response is the same. From 300 Hz to 20,000 kHz, there is no attenuation of individual frequencies. All one needs to do to correct for the screen is adjust the volume of their front channel speakers by +3dB and it is acoustically neutral. Your room EQ system like Audyssey or ARC will also handle this for you. In the graph, the green line is the screen without the blackout cloth, red is the screen with the blackout cloth, and purple is open air, no screen.

What does the Enlightor 4K projection screen offer? It lets you install a larger screen than before and it makes you more involved in the movie by using that ear-level center channel. It brings that movie theater experience home more than it did before. You’ll want to have a projector that has plenty of light output for it, as the gain is low, but there are many options for that today. If you want the biggest screen you can get, and to replicate a movie theater experience, an acoustically transparent screen like the Enlightor 4K will get you there.