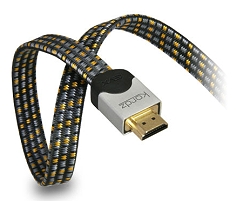 HDMI cables have two basic issues that are somewhat different than with audio cables, namely that they tend to be much longer, and also, the HDMI connector has turned out not to be very robust. So, if the HDMI cable that came with your new HDTV or DVD player is not doing the job for you, Kordz makes cables that will deliver the goods under any conditions. We review here their pure copper model, the EVO, as well as the EVS which has a thin coating of pure silver, and the EVX, which has a thicker coating of silver. In 5 meter lengths, the EVO is $149, the EVS is $199, and the EVX is $229.

The Kordz factory is in Australia. Their website has a link that will help you located a dealer in your area.

Although there is some controversy about how much of the audible band frequencies travel along the surface of a cable – i.e., the “Skin Effect”, there is no question when high frequencies are involved, such as the megahertz region where digital audio and video are located.

Both copper and silver are excellent conductors, but silver is slightly better, so having silver conductors in HDMI cables is a good idea, but because of the skin effect, it is not necessary for the cable to be solid silver. A thin coating is all that is necessary. And, it is worth the extra expense only if you are going to run the HDMI cable up to about 15 feet, carrying 1080p signals. If you are just using a 1 meter HDMI from your Blu-ray player to your SSP or receiver, the copper HDMI cable is fine.

When HDMI was introduced to the consumer market, we all thought that it was terrific to see how small it was, in fact, much smaller than the DVI connector it replaced. The problem is that these small connectors are not very strong (I wish now they had just adapted the DVI connector to the HDMI specification, as the DVI plug and jack are very sturdy), and it is easy to end up with a HDMI plug/jack that becomes defective due to strain on the connection from bending the cable behind the equipment rack.

Most cable companies now offer a line of HDMI cables, including Kordz. They are available with pure copper conductors (called the EVO), thin coating of silver (2% total volume of the conductor, called the EVS), or thick coating (7% total volume, called the EVX). In terms of the skin effect, it is probable that all of the digital audio and video signals are travelling on the surface of the conductor because of their high frequency (Megahertz). As silver is the better conductor, you might want to consider purchasing the silver-coated models if your source is more than 1 meter from your SSP or receiver, and especially for the projector which is likely to be about 12 feet from your receiver (using the HDMI output of your receiver to your projector).

I tested the Kordz EVO, EVS, and EVX HDMI cables in 5 meter lengths using an Accupel HDG-3000 digital video signal generator, and a Vizio 55″ 1080p LED LCD HDTV. All three Kordz models delivered full high resolution images with the signal generator, as well as with cable TV HDTV programming. There were no “sparkles” with any of the cables (sparkles, or random small white dots where pixels are not receiving a video signal) appear when the cable is dropping part of the high frequency digital signal). The Kordz plug fits tightly into the jack compared to some other HDMI cables I have used. This will go a long way in not only maintaining good conductor contact in the jack, but also protecting the connection from strain damage.

When Kordz first began marketing HDMI cables, they were made pretty much like all HDMI cables. The solder joints looked like the photo shown below. 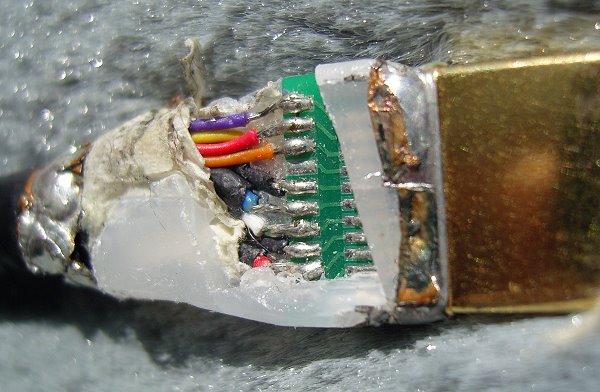 The subsequent iteration looked as shown below. The soldering was somewhat better, but there was still room for improvement. 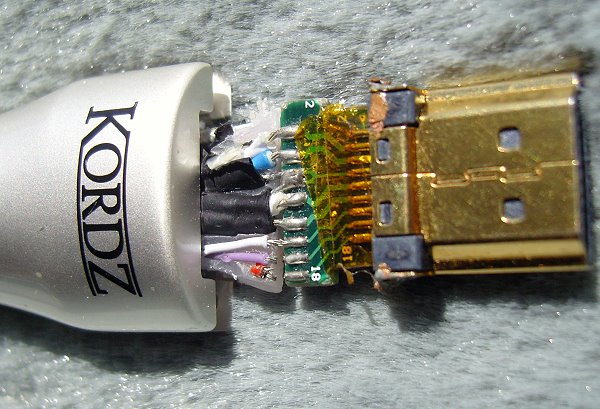 Finally, through a process of extreme high pressure “cold welding”, Kordz produced connections in their current line, seen below. Having a consistent connection between the HDMI pins and the multiple conductors is important because it maintains the integrity of the bitstream. The HDMI cable that came with your HDTV or Blu-ray player is likely to have the type of solder joints shown in the top photo above. 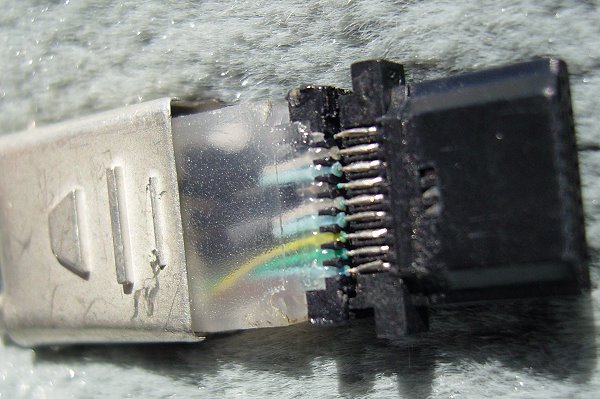 So, my suggestion is that if you need only a 1 meter HDMI cable, get the EVO, if you need 8 feet, go with the EVS, but if you require a long cable, i.e., 15 feet, it would be worthwhile to get the EVX.